Travelling Back to the Dawn of Civilization

There are so many historical tales to unravel in Türkiye, a country sitting at the crossroads of civilizations, filled with the remnants of human history in all the significant stages of its fascinating evolution. Next time you are making travel plans, make sure that one of the country’s UNESCO World Heritage Sites is on your shortlist.

From the Neolithic period all the way to the Ottoman Empire, every corner of Türkiye has its famous historical remnants, quietly telling tales of powerful civilizations that once spread their influence across these lands. The world’s first settlements spanning 12 millennia back in time, the grand temples and cities of antiquity, the hidden churches of early Christianity, and the great mosques and palaces of the Ottoman Empire offer the visitor so much to discover in Türkiye. Nineteen of these hotspots have been listed as UNESCO World Heritage Sites with “outstanding universal value”, and you might want to add a few of them to your holiday itinerary to admire “the creative genius of humanity” in Türkiye, some of which are also set in areas of exceptional natural beauty. 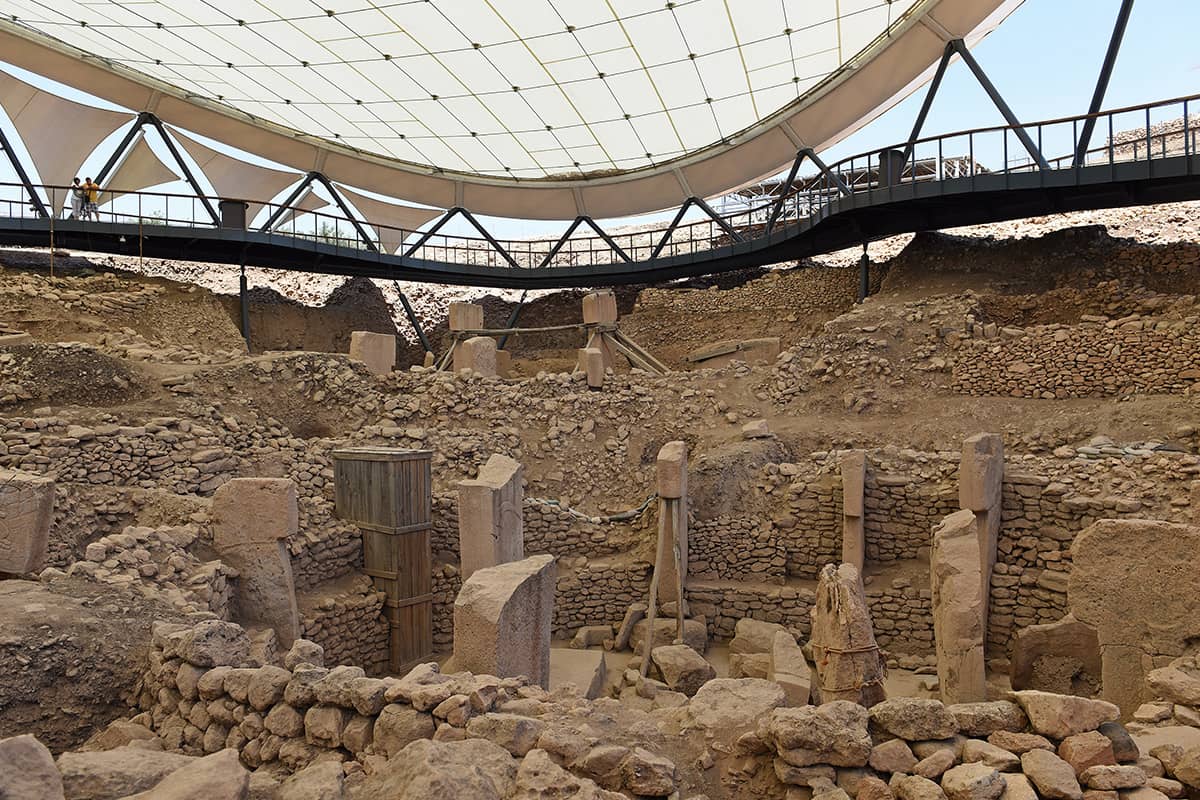 The historical journey through Anatolia begins in the Neolithic period with Göbeklitepe, the world’s first sacred site, going back to around 9600 BCE. At the foot of the majestic Taurus Mountains, looking out over the arid slopes of the Harran Plain, this is one of the most important sites of the Neolithic Age, predating both Stonehenge and the Egyptian pyramids. The collection of circles formed by T-shaped stone pillars with intricate carvings expresses the mystic power of a site of worship older than history itself. 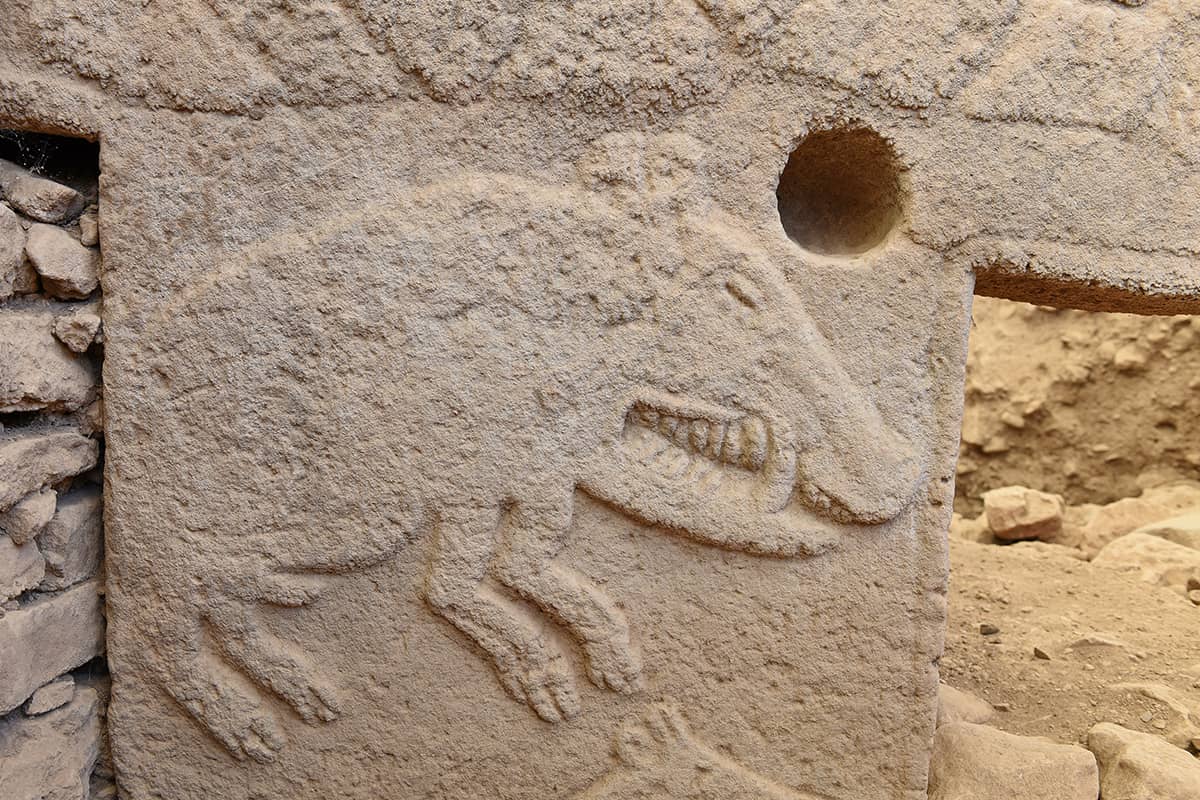 At the heartland of Türkiye, Çatalhöyük is another famous Neolithic excavation site where the world’s first urban settlement was unearthed to alter all the history books that have been written so far. It is here that visitors can travel back in time to the beginnings of human history through the remnants of rooms believed to have been temples, elegantly decorated houses and elaborate artefacts that clearly signal the sophistication of this ancient society. Even though objects such as statues of the Anatolian Mother Goddess and fragments of elaborate wall paintings can be found at the Museum of Anatolian Civilizations in Ankara, it is the excavation site itself that is so enthralling because of its immediacy, the act of walking through spaces where such early signs of human life once thrived.

The Arslantepe Mound is another UNESCO World Heritage Site with ties to the Mesopotamian world and, later, the Hittite civilization, with an unearthed king’s palace that acts as an open-air museum today. Of course, no act of time travel through Anatolia would be complete without a hike up to Mount Nemrut, soaring up to 2,400 meters above sea level, which is utterly rewarded with the monumental tomb sanctuary of King Antiochus I Theos of Commagene (69-34 BC), the most famous ruler of the Kingdom of Commagene. The colossal statues of this sanctuary, unmatched in the ancient world, are like being present in another realm entirely, on top of a mountain away from everything else. 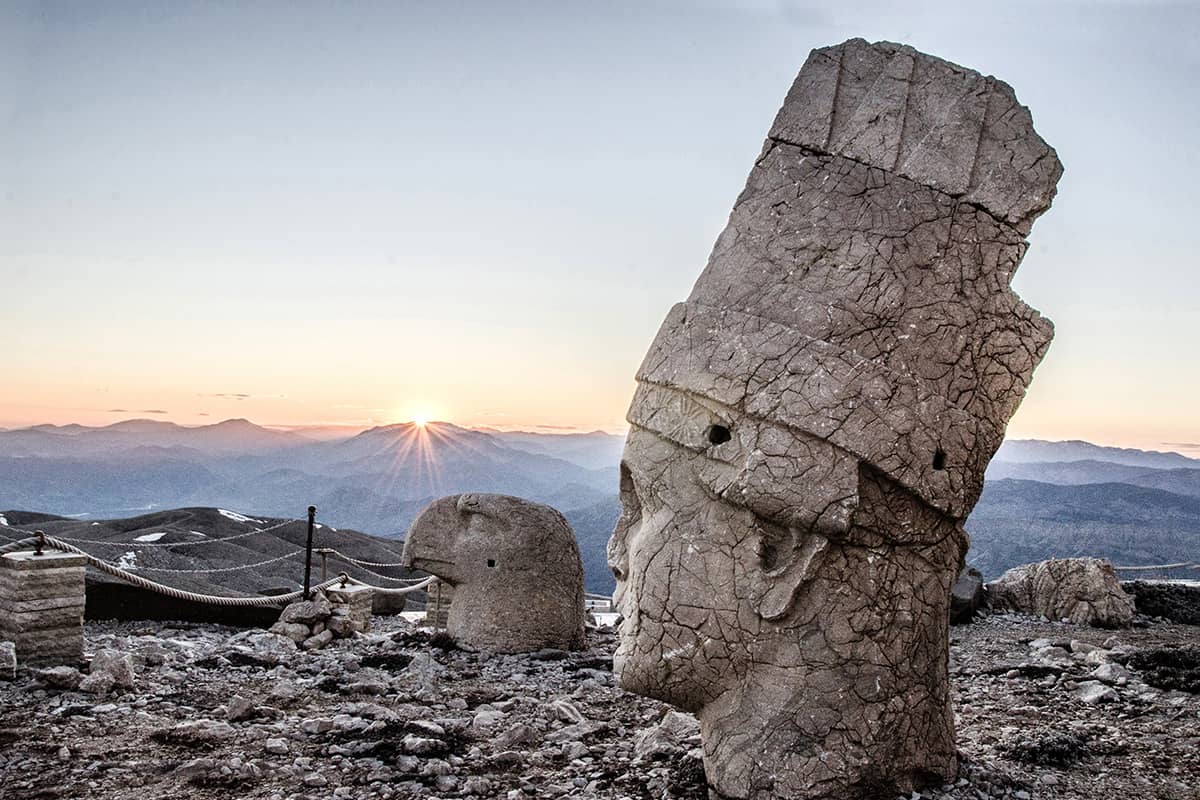 One of Anatolia’s greatest civilizations, the ancient capital city of the Hittites, is yet another discovery that’s essential for any history enthusiast. Hattuşaş is a UNESCO World Heritage Site filled with the beautiful ruins of temples, palaces, monumental sculptures and enormous fortification walls with ceremonial gates and tunnels. Stunning pieces of visual evidence that this was the centre of a mighty empire.

Cultural Blossoming of the Classical Period

Northwest of Bergama, the remnants of the Hellenistic period unveil themselves in the form of Pergamum, once a political and intellectual centre, a city of learning and culture, and the home of The Library of Pergamum, which contained almost 200,000 volumes of books. Nestled into the natural landscape, with the summer wind to keep it company, the grand columns still stand today, defying the effects of time. The city’s Asklepium (Sanctuary of Asclepius) was also one of the oldest and largest healing centres in the ancient world. More beauty from antiquity can be found at Aphrodisias, once famous for its Temple of Aphrodite and its exquisite marble sculptures -a city whose columns, pediments, theatre, sarcophagi and monumental gateway still partially stand to this day, continuing to exude grandeur. Aphrodisias Stadium is perhaps the city’s most magnificent work and the best-preserved ancient stadium of the Aegean in antiquity. 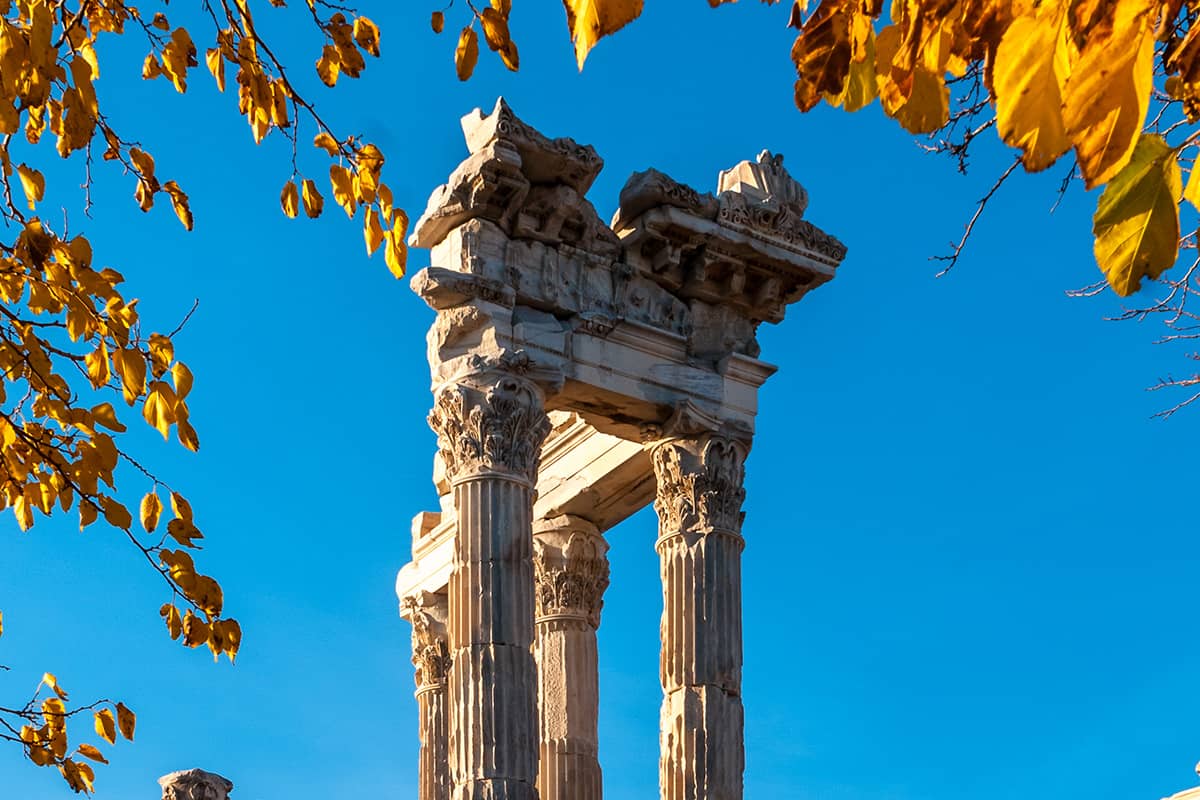 Of course, the most notable in the list is the city of Ephesus, certainly the most well-preserved and the largest Roman archaeological site in the eastern Mediterranean. The 4th century BC Temple of Artemis, which was recognized as one of the Seven Wonders of the Ancient World, the Library of Celsus and the Basilica of St. John are some of the main sights that have been gazed at in wonder by visitors from all over the world for so long. Apart from the ancient spa city of Hierapolis in Pamukkale, from the 2nd and 3rd centuries AD, and Xanthos-Letoon, the capital city of Lycia, Anatolia is also home to Troia, mentioned in Homer’s epic Iliad, where a symbolic wooden Trojan horse commemorates the legendary war at the waterfront of Çanakkale.

Anatolia in the Medieval Times

Like a fairy tale world that rises out of the natural landscape, the town of Göreme and its Christian monasteries dating back to the 8th through the 11th centuries are a site of pilgrimage and wonder. Visitors can stay in cave hotels that are dug into the local tufa limestone, just like the fascinating historical sites themselves and wake up at dawn to see the beauty of this area on a hot air balloon ride at sunrise. Another important archaeological site, Ani, was a great metropolis that was once known as the city of a thousand and one churches. A true beauty of medieval urbanism, the remaining structures silently stand in nature, quietly exuding their subtle power from the Christian and Muslim dynasties.

A true Muslim stronghold, the Great Mosque and Hospital of Divriği, is one of Anatolia’s most important works of architecture, especially the three-dimensional ornamentation of the two entrances, which take a permanent place in the memory of everyone who sets eyes upon them. Much like the city of Diyarbakır, a treasure of history, including the Diyarbakır Fortress and Hevsel Gardens Cultural Landscape, a fertile landscape near the Tigris River, also unforgettable due to their exceedingly well-preserved state. 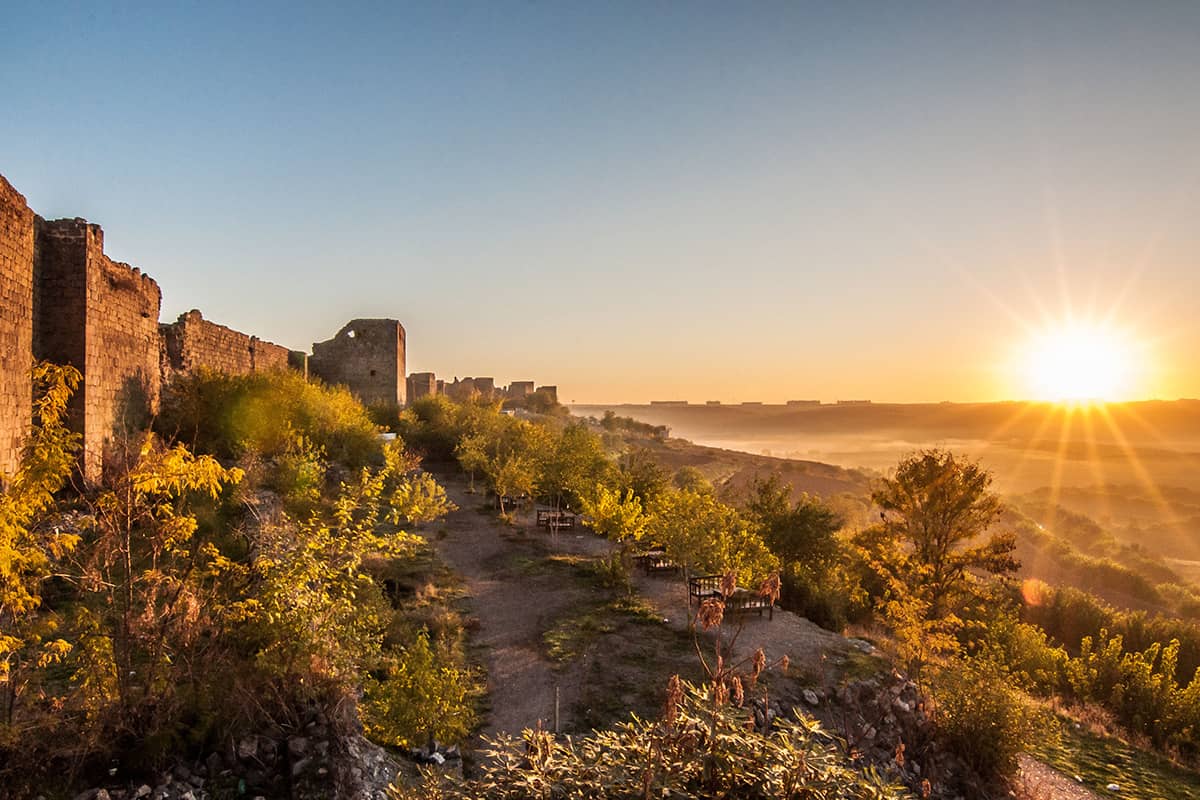 The Seats of the Ottoman Throne

A historical journey through Türkiye is never complete without seeing the splendour of the Ottoman Empire. Bursa was the first capital of the empire between 1335 and 1363 and has its share of fascinating monuments, including the Ulu Mosque (Grand Mosque of Bursa), Silk Bazaar, Green Mosque and the Tombs of Osman and Orhan, the founders of the Ottoman Empire.

If that didn’t suffice, nearby Cumalıkızık is also a showcase of Ottoman civic architecture, a village of colourful wooden houses, more of which can be found in the City of Safranbolu, one of the best-preserved Ottoman cities. Yet, the Ottoman era can’t be discussed without mentioning the chief Ottoman architect and civil engineer Mimar Sinan, one of the most important representatives of the classical period of Ottoman architecture, who built more than 300 significant structures. 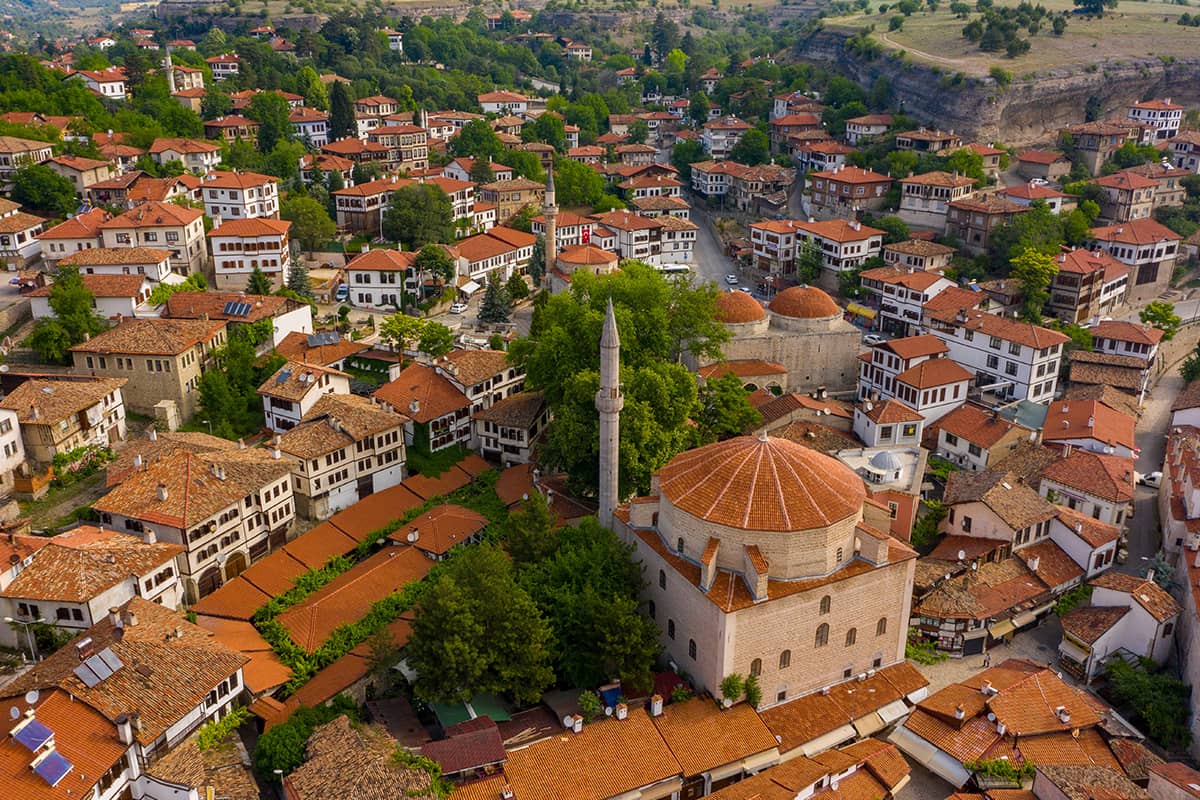 The Selimiye Mosque and Its Social Complex are among his most notable achievements, a true masterwork that leaves its visitors in awe near Edirne, the second capital of the Ottoman Empire. The true beauty and influence of the Ottoman era begins when İstanbul became the seat of the Ottoman rulers. One of the world’s richest open-air museums, the Historical Peninsula of İstanbul is not only home to exquisite Ottoman monuments like Topkapı Palace, Sultan Ahmet Mosque (the Blue Mosque), and Süleymaniye Mosque but also to the Eastern Roman marvels like the Walls of Constantinople, Hagia Irene, Little Hagia Sophia, the Hagia Sophia Grand Mosque, and Zeyrek Mosque (Pantokrator Monastery). These ancient monuments have been protected by the Ottomans for centuries so that we can still enjoy their grandeur, like all the other remnants of so much history dating back to the beginning of humanity, scattered around the country, waiting to be discovered and never forgotten.