The Most Beautiful Parks & Gardens in İstanbul 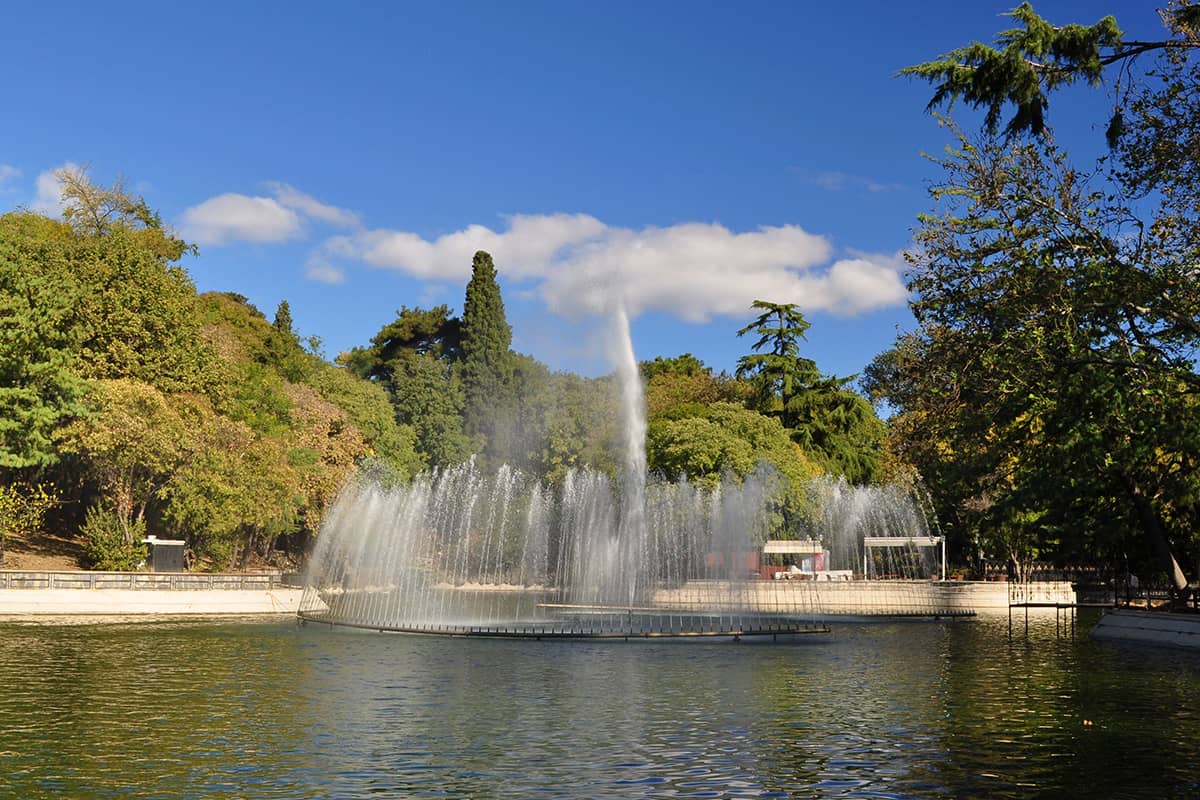 One of the largest public parks in İstanbul, Yıldız Park (Yıldız Parkı) adorns İstanbul's Yıldız quarter. It’s located between the palaces of Yıldız and Çırağan, both falling within the boundaries of the Beşiktaş district. The garden has become a popular picnic ground and a lovely retreat for families and friends. Yıldız Park extends along a large green area, and is the perfect destination for a walk and some rest surrounded by nature.

Yıldız Park has two artificial lakes that complete the ideal picture of greenery. The park’s large size guarantees it’s always easy to find a corner all to yourself. Don’t be surprised if a squirrel, hedgehog, or other wildlife comes up and asks for some offerings from your picnic basket!

Click here to learn more about Yıldız Park and other İstanbul routes. 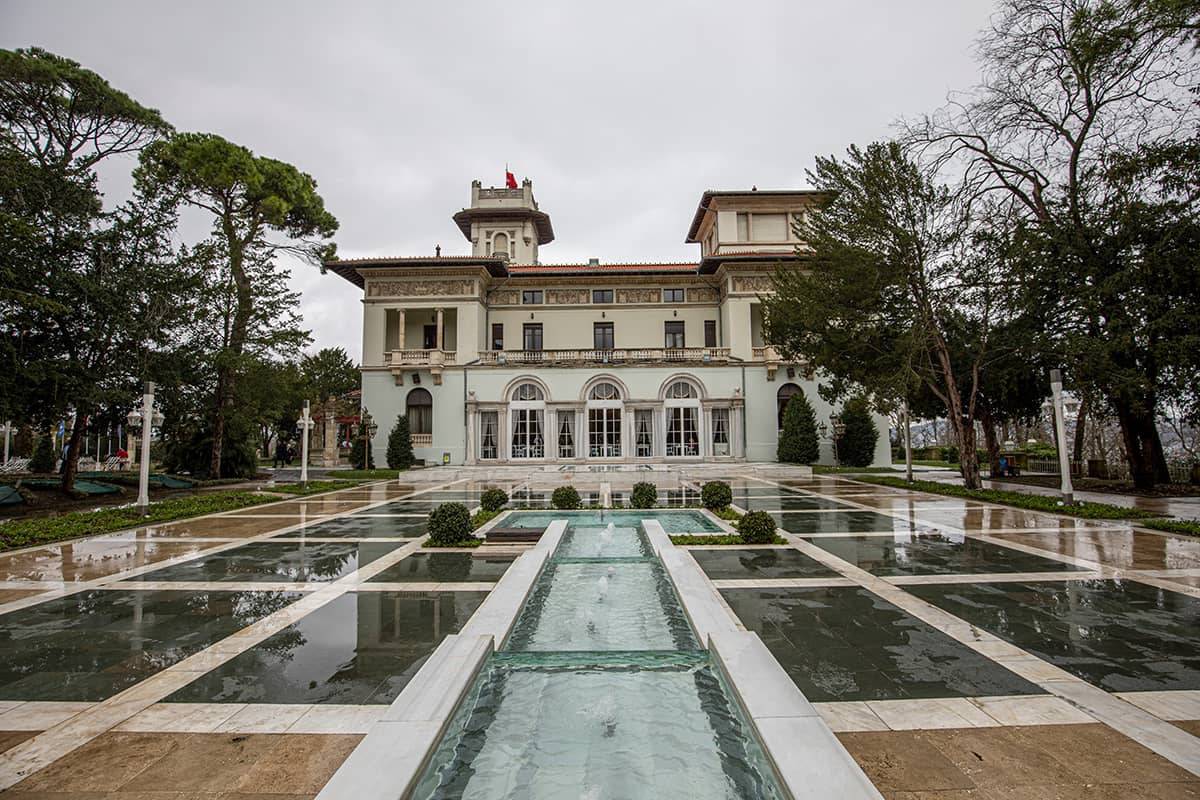 A cultural treasure that dates to the early 20th century, Hidiv Kasrı (Khedive Palace) is located between İstanbul’s Çubuklu and Kanlıca quarters, on top of a hill that overlooks the Bosphorus. Its marble terraces and high tower offer the perfect locations for a breathtaking view of the Bosphorus and are now part of a restaurant. The building was constructed in the Art Nouveau style, incorporating characteristics and details of Neo-classical Ottoman architecture. The palace appears embroidered with an array of geometrical and floral figures that are evidence of both Western and Ottoman influences.

A short walk from the Kanlıca and Çubuklu quarters you will come across Çubuklu Parkı (Çubuklu Park), which surrounds Hidiv Kasrı. It’s usually less crowded than the other parks and gardens of İstanbul though equally beautiful. Its location atop a hill, makes this park ideal for exercising or taking a rigorous walk. Just like Yıldız Park, it has artificial lakes that present a delight to the eyes.

Çubuklu Park is a favored destination for photo shoots commemorating special occasions. You’re strongly advised to take your camera with you! You may also want to visit the Kanlıca quarter, which is just a short walk away, Here, you can taste the delicious local yogurt and admire the exquisite examples of urban architecture.

To learn more about how to create a short excursion route in İstanbul, visit here. 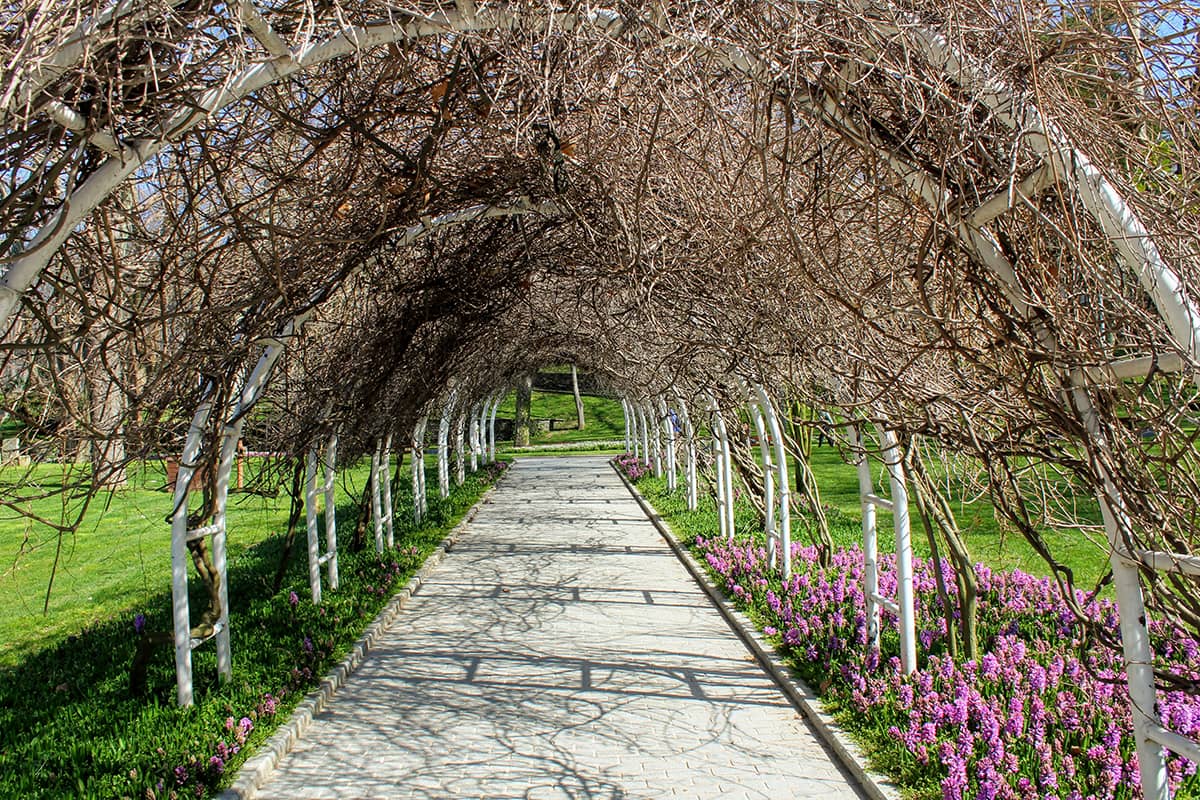 If you are looking for a relaxing walk in the heart of nature in İstanbul, Gülhane Park is the perfect choice! Home to the beautiful plant-covered archway seen here, it’s a historical park located in the Fatih district of İstanbul. Gülhane Park is one of the city’s oldest and most expansive public parks, which served, in its Ottoman past, as a celebration and ceremony center. In Ottoman times, the park was the garden of the Topkapı Palace, which is adjacent to the park. The park was, in fact, built to grow roses for the palace, which is why it was named “Gülhane,” meaning “the house of roses.”

The park’s artificial pools have been renovated and complete the picture of the park as a recreational area. The park offers visitors magnificent Bosphorus views. Be sure to stop by and enjoy the peaceful environment surrounded by beautiful gardens, pools, and breathtaking views. 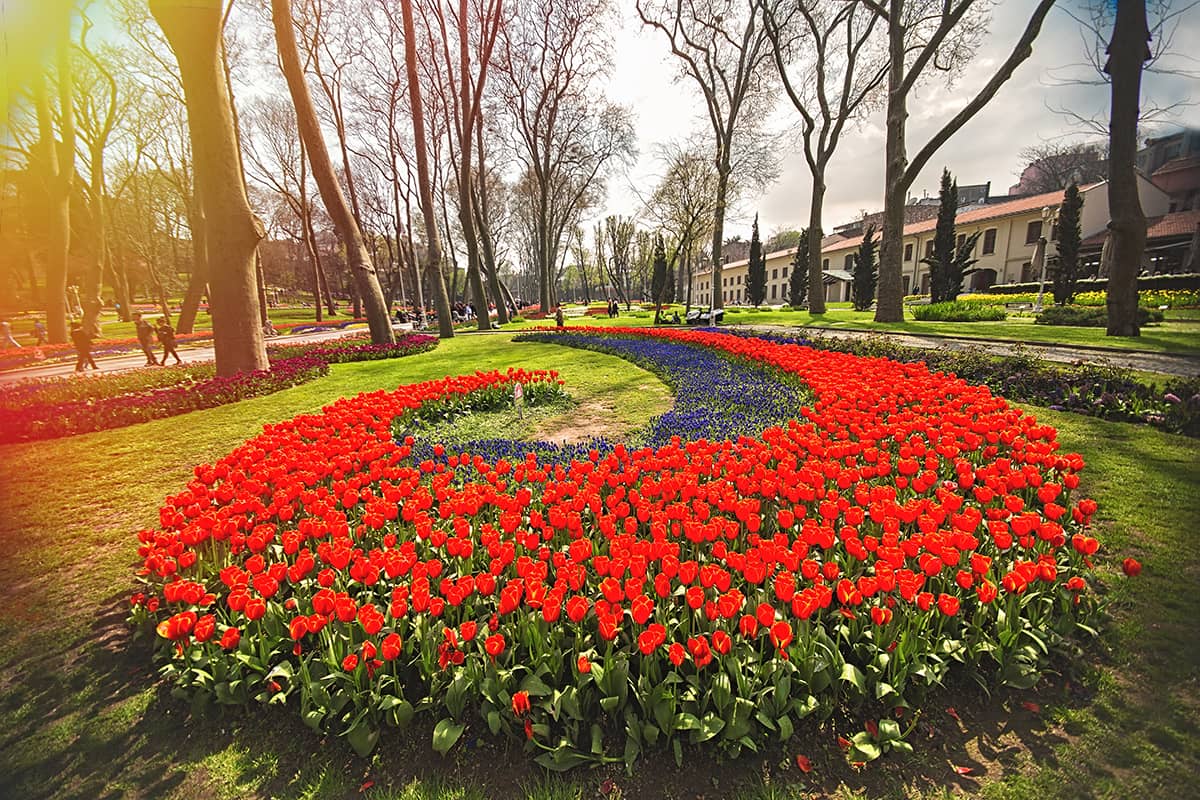 Gülhane Park houses the İstanbul Museum of the History of Science and Technology in Islam, while many of İstanbul’s most acclaimed tourist attractions, such as Sultan Ahmet Mosque and Hagia Sophia (Ayasofya) are nearby. It is highly recommended to visit the park around the dates of the İstanbul Tulip Festival, which is held annually in the last three weeks of April. Tulips have become a symbol of İstanbul and Gülhane Park is one of the many places where you can encounter beautiful displays of tulips. Gülhane Park also features a variety of sculptures inside the garden and surrounding it. The first statue of Türkiye’s great leader Mustafa Kemal Atatürk, created by Heinrich Krippel, was erected here in 1926.

To learn more about parks and gardens in Türkiye, visit here. 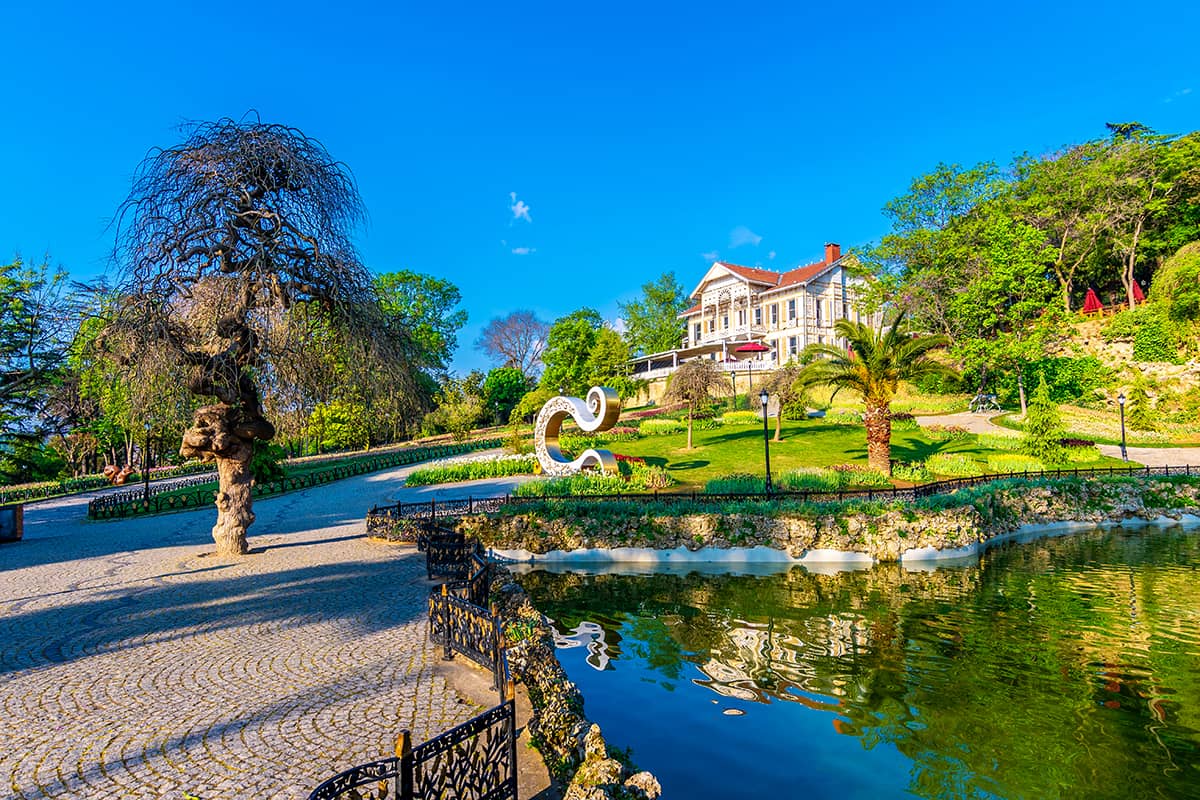 Emirgan Park is located in Sarıyer, a famous İstanbul district situated on the European coast of the Bosphorus. It’s among the largest and most renowned parks of İstanbul, and offers a relaxing escape from the city’s crowds.

The park stands on a hillside and is enclosed by high walls. It’s home to two decorative ponds and over 120 species of plants. Its many jogging tracks and picnic tables make the park a very popular recreation area for locals, especially on the weekends and holidays. With its wide paths, Emirgan Park is also the perfect place for biking. 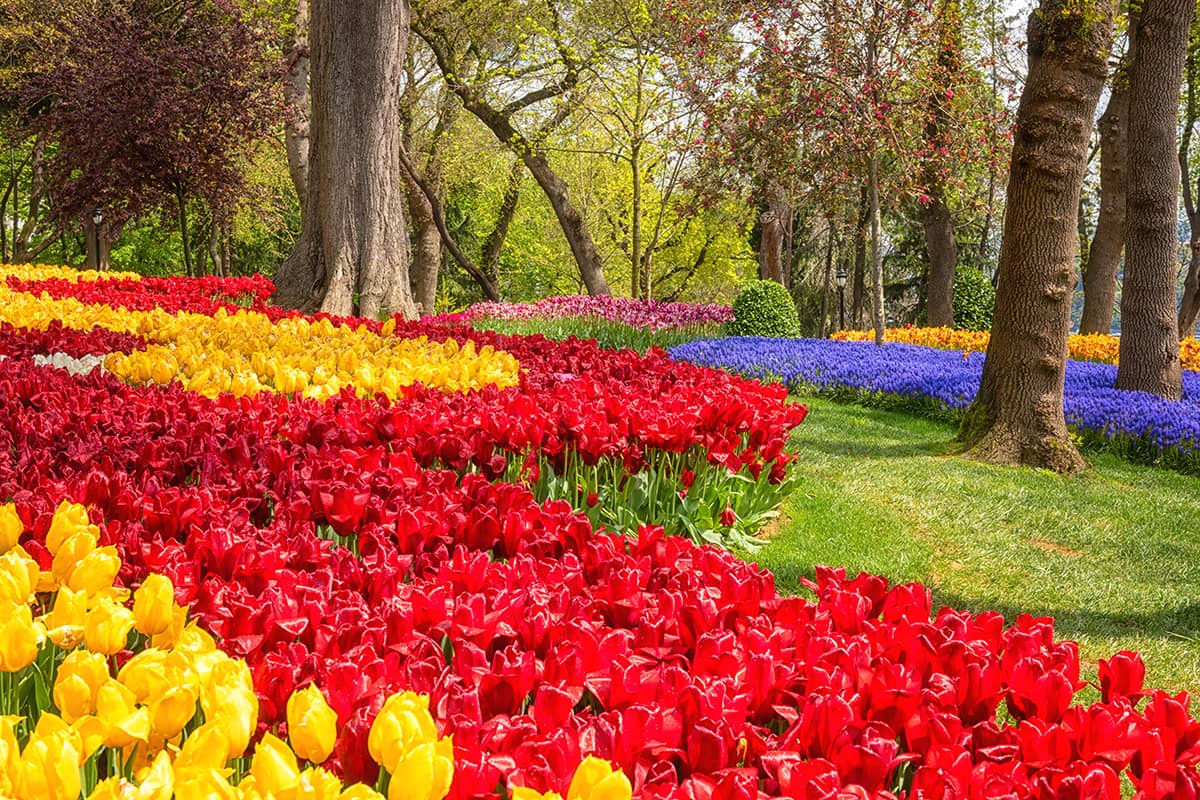 Like Yıldız Park, Emirgan Park is home to three historic pavilions, named after the color of their exterior: Sarı Köşk (Yellow Pavilion), Pembe Köşk (Pink Pavilion), and Beyaz Köşk (White Pavilion). A tulip festival takes place at the park annually in a special garden, which was established in the 1960s to revive the city’s tradition of tulip cultivation. During the festival, the tulips, İstanbul’s traditional flower, you will encounter here are truly a sight to behold!

To learn more about the European shore of the Bosphorus as a biking route, visit here. 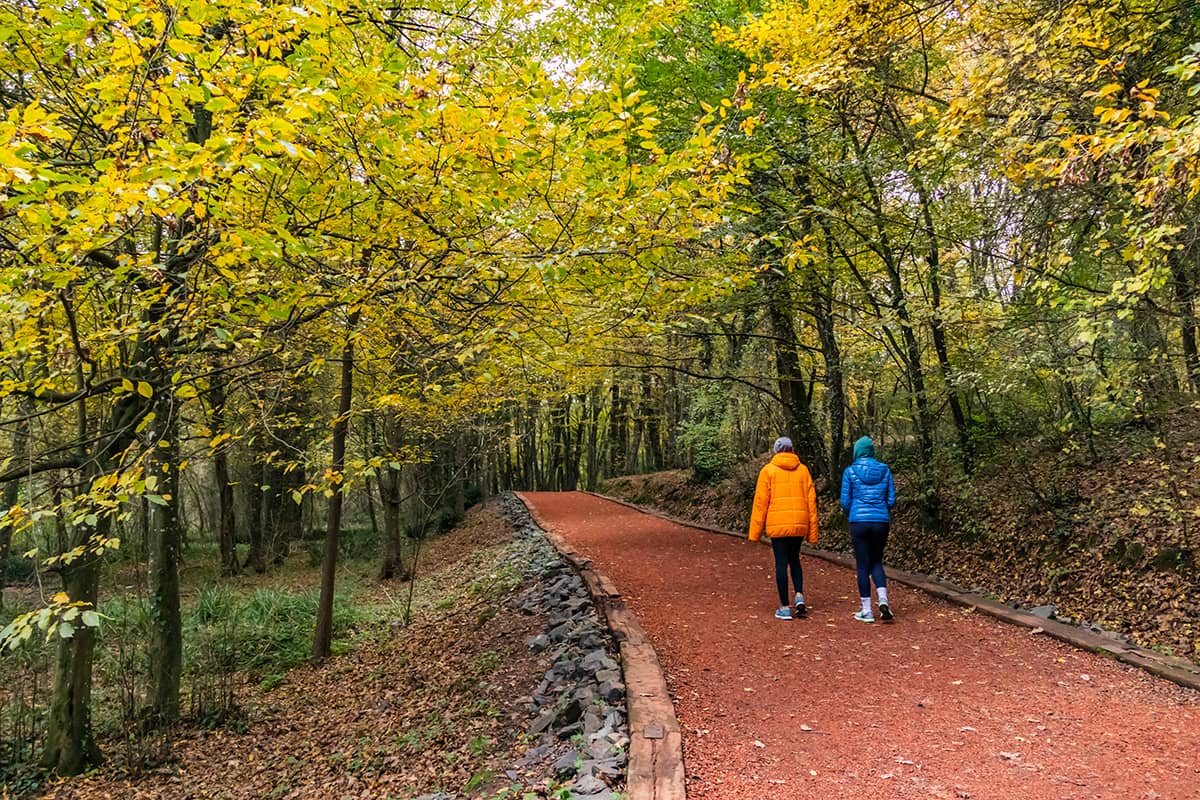 Spanning between the districts of Sarıyer and Eyüp in İstanbul, Belgrad Forest is the largest woodland in İstanbul. It lies 15 kilometers northwest of İstanbul on the Çatalca Peninsula and is a preferred location for jogging and walking. A natural haven in spring with blooming flowers and lush trees, it presents visitors with numerous paths and walking trails. What differentiates it from other parks and gardens in İstanbul is that it’s home to several historical reservoirs. Its many picnic tables make it the perfect destination for an outdoor meal immersed in greenery that’s dotted with touches of history.

The forest is also home to aqueducts and ancient channeling systems, most of which were built during the Roman and Byzantine eras. The structures were upgraded by the great Ottoman imperial architect Sinan. Now, a series of aqueducts crisscrosses the roads near İstanbul’s Kemerburgaz district.

Be sure to visit this wonderful woodland when you’re in İstanbul and feel yourself reconnect with nature. 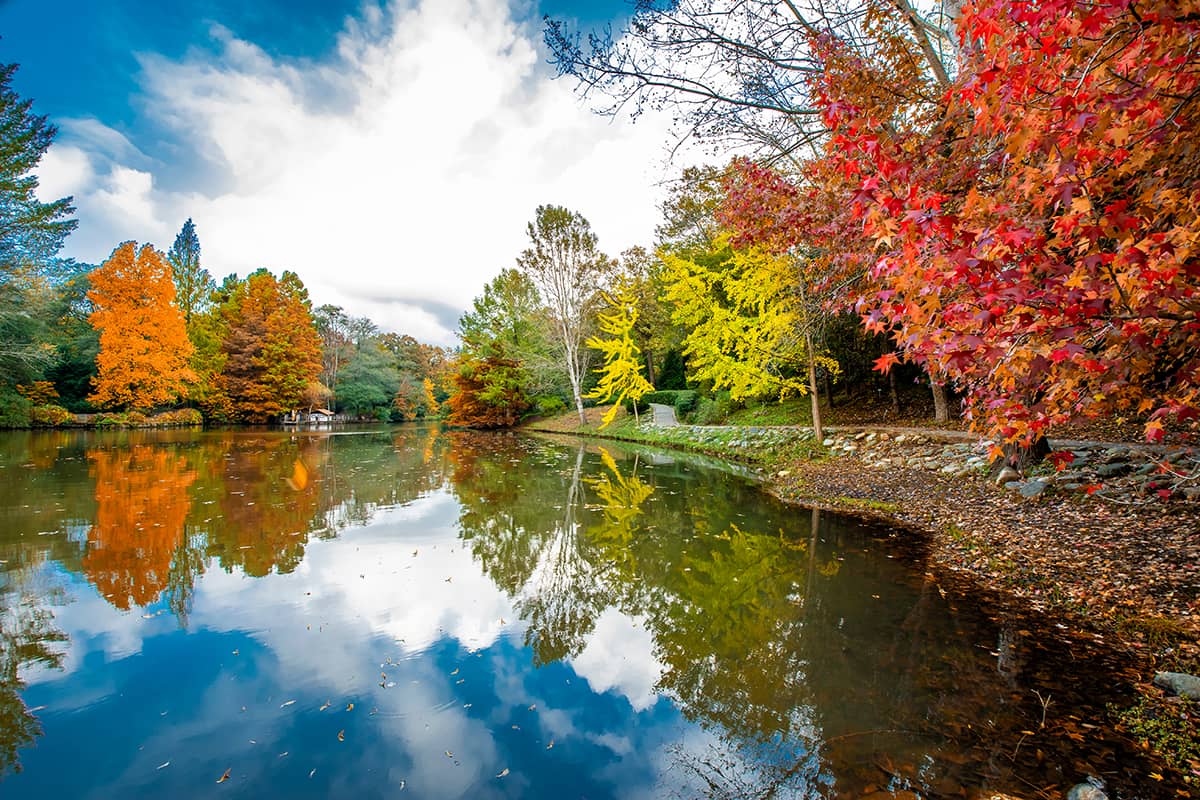 Atatürk Arboretum is situated within Belgrad Forest, and is home to more than 2,000 plant species. It’s mostly visited in the autumn when its collection of oak trees from all around the world can be duly admired. The arboretum’s collection offers the perfect backdrop for your photographs – pack your camera and prepare yourself for some unforgettable snaps! 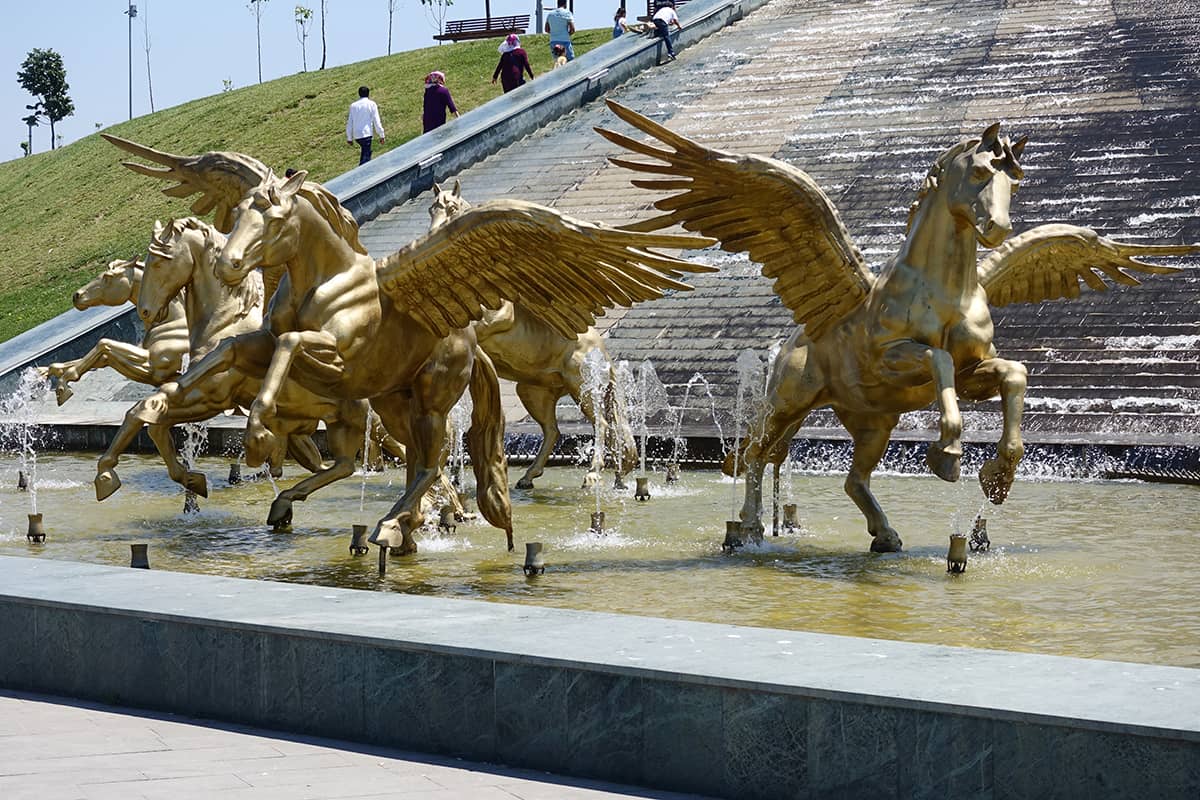 Bakırköy Botanical Park is full of different species of trees, and is home to eleven thematic gardens. It’s adorned with many sculptures, recreational areas for children, and wind turbines to promote an ecological lifestyle and to meet the park’s power needs. The park houses natural and artificial pools, and is home to many species of birds and turtles. 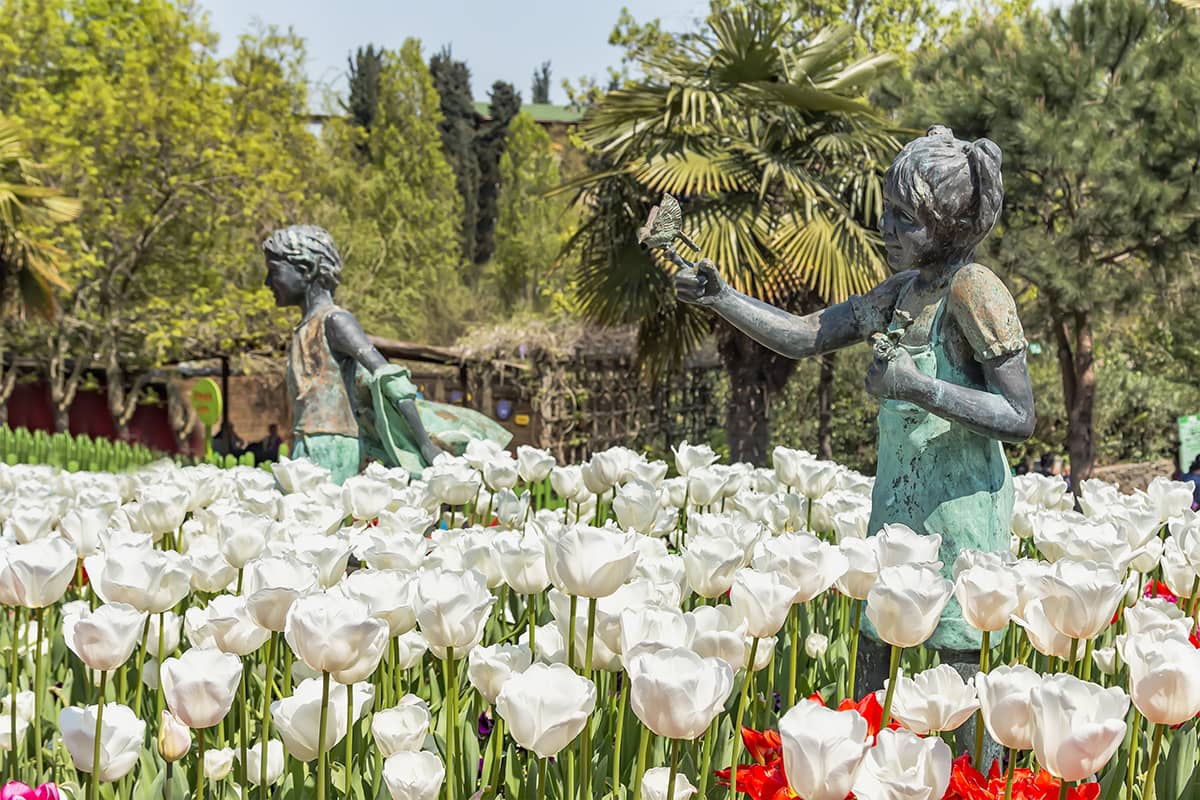 Nezahat Gökyiğit Botanical Park in Kuzguncuk is one of İstanbul lesser known botanical parks. Its peacefulness makes it the perfect place to recharge and relax. First constructed as a memorial park, it was converted into a botanical garden in 2003. It exhibits types of trees that are native to Türkiye alongside an array of foreign species that were brought to the garden and cultivated here. Apart from a great recreational area, it carries an importance for botanical studies as well - Nezahat Gökyiğit Botanical Park is a significant herbarium by virtue of its more than 8,500 species of flora.

Luckily, you do not have to travel to the Far East to delight in the Sakura cherry trees’ pink mist!

A discreet walled park tucked away on the shores of the Bosphorus, Baltalimanı Japanese Garden was founded with the collaboration of Japan and Türkiye. It was completed in 2003 within the scope of the “Japanese Year in Türkiye” with the contributions of the Japanese city of Shimonoseki, a sister city of İstanbul.

The garden overlooks the İstanbul Strait, also known as the Bosphorus, and is the perfect destination for a delightful walk with its tea garden (Yogetsuan), waterfalls, and gullets. It’s regularly visited by local and foreign tourists as a recreational area, and its Sakura cherry trees turn it into a perfect natural scenery where two cultures mold into one. The pink camellias, Japanese maples, native plants and flowers add to the tranquility of this beautiful garden. 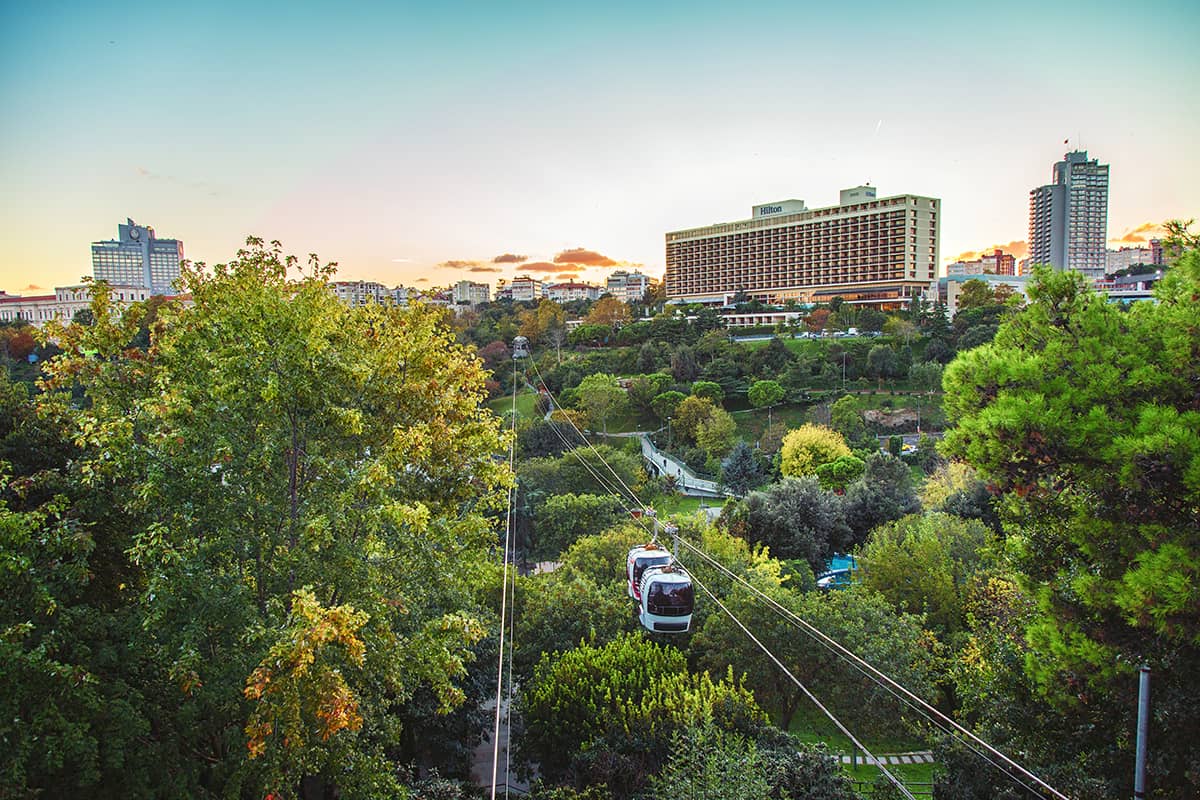 Nestled perfectly into the heart of this metropole, Maçka Democracy Park offers the ideal paths for jogging, walking, and walking your dog. Early in the morning, you will encounter many locals in the park, exercising or just taking in the fresh air. The park has areas for children and decorative pools. It is situated above a large area that extends from İstanbul’s Nişantaşı quarter to Harbiye. It’s a picture-perfect environment which is regularly visited by photographers.

Maçka Democracy Park is rich in terms of flora with hundreds of tree species such as lime, poplar, and chestnut trees. It has functioned as a recreational area since the 19th century. An aerial tramway operates between Maçka and İstanbul’s Taksim district, and offers perfect views of the park and the surrounding area. There is also a café on the Nişantaşı side of the park, where locals like to enjoy breakfast surrounded by the greenery. 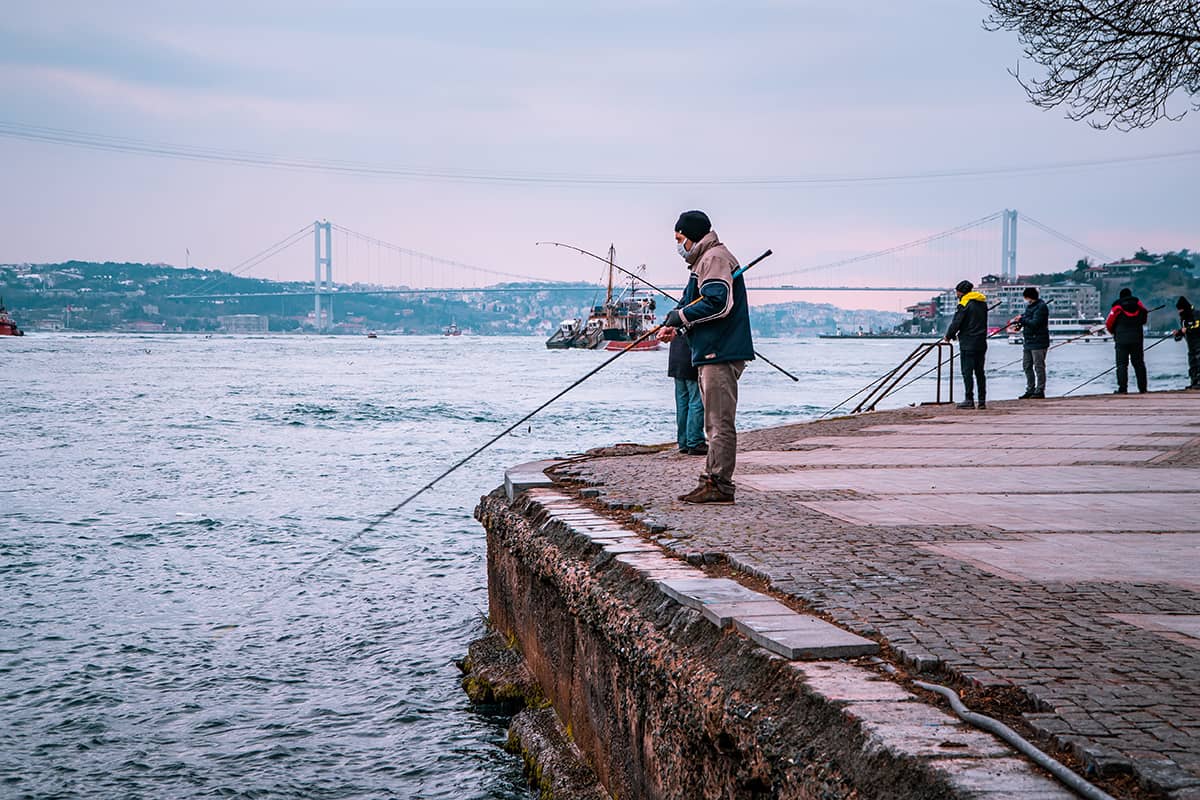 Türkan Sabancı Bebek Park is an urban park located on the shore of İstanbul’s Bebek neighborhood. In the 18th century, it served as a private garden for Hümayunabad Pavilion. From 1908 onwards, it became a public park. In the park, there’s a beautiful sculpture of the Turkish intellectual, poet, and writer Fuzuli, who is considered one of the greatest contributors to the divan tradition of literature. 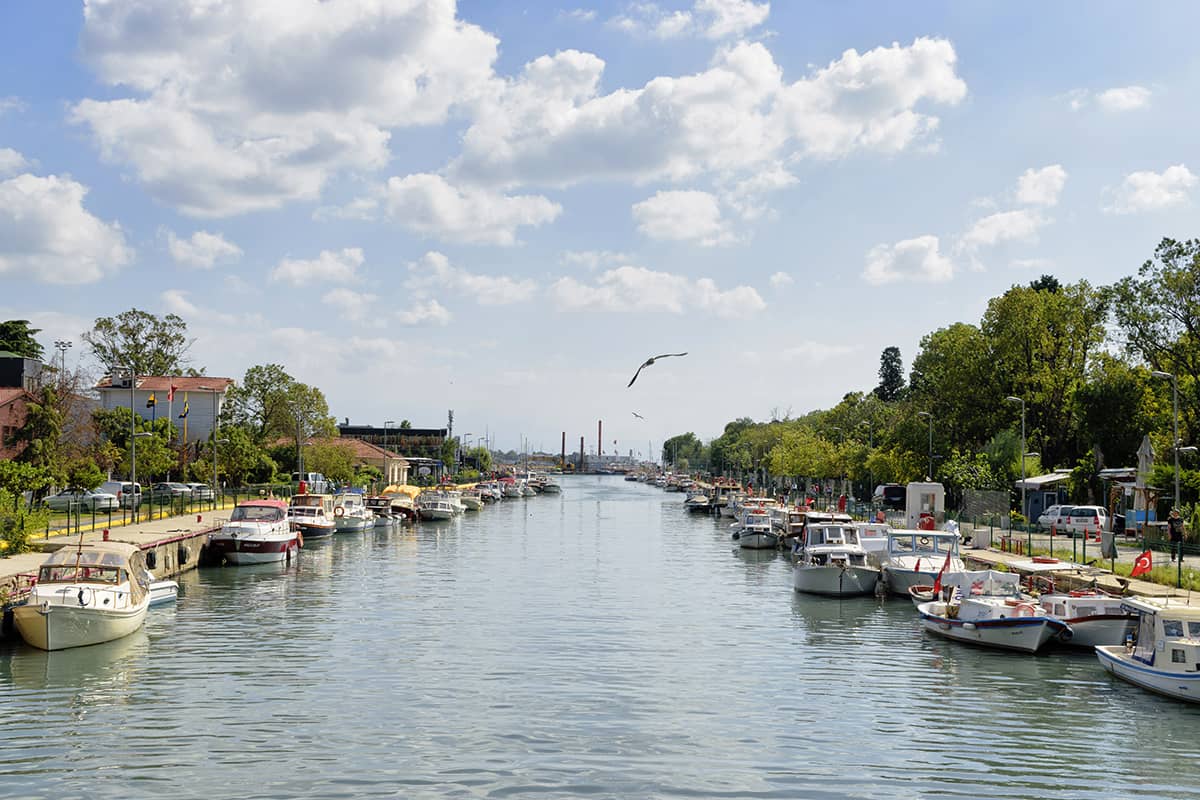 Yoğurtçu Park is Türkan Sabancı Bebek Park’s Asian sibling! It’s located near Moda Pier in Kadıköy, İstanbul, and spans a large area that extends from Kurbağalıdere to the shore in Moda. It takes its name from the charity fountain, Yoğurtçu Çeşmesi, and has been a favored İstanbul recreational area since the 18th century.

There are two sculptures in the park that add an artistic touch to the surroundings: one of a mermaid and the other of Yunus Emre, the Turkish folk poet and Sufi mystic who greatly influenced Turkish culture.

The park is home to walking trails, a basketball court, a tennis court, playing grounds for children, exercise equipment, and cafés that serve tea, coffee and refreshments. It hosts events like concerts and festivals as well as bazaars where people sell secondhand clothing and furniture, and handcrafts. There is also a nearby stream, Kurbağalıdere, whose calmness is certain to enchant you.

For those interested, here’s a link to our İstanbul guide: visit here.