The Neolithic sacred site of Göbeklitepe promises its visitors a time travel back to largely unknown periods of human history. In recent years, an additional 11 early settlements have been unearthed in the rugged stone hills surrounding Şanlıurfa. These combined with Göbeklitepe, form what is today known as “Taş Tepeler”. Together they shine new light upon the dawn of our civilisation.

Anatolia, the storied land known as Türkiye today, is depicted as the cradle of civilisation for a reason. The discovery of the earliest examples of human settlement near Şanlıurfa, a storied city in the Southeast of Türkiye, has further strengthened this claim. As the seat of many polytheistic and monotheistic religions and the birthplace of the world’s first prophet Abraham, Şanlıurfa is now the epicentre of the century’s most important archaeological finds dating back to the Neolithic age. 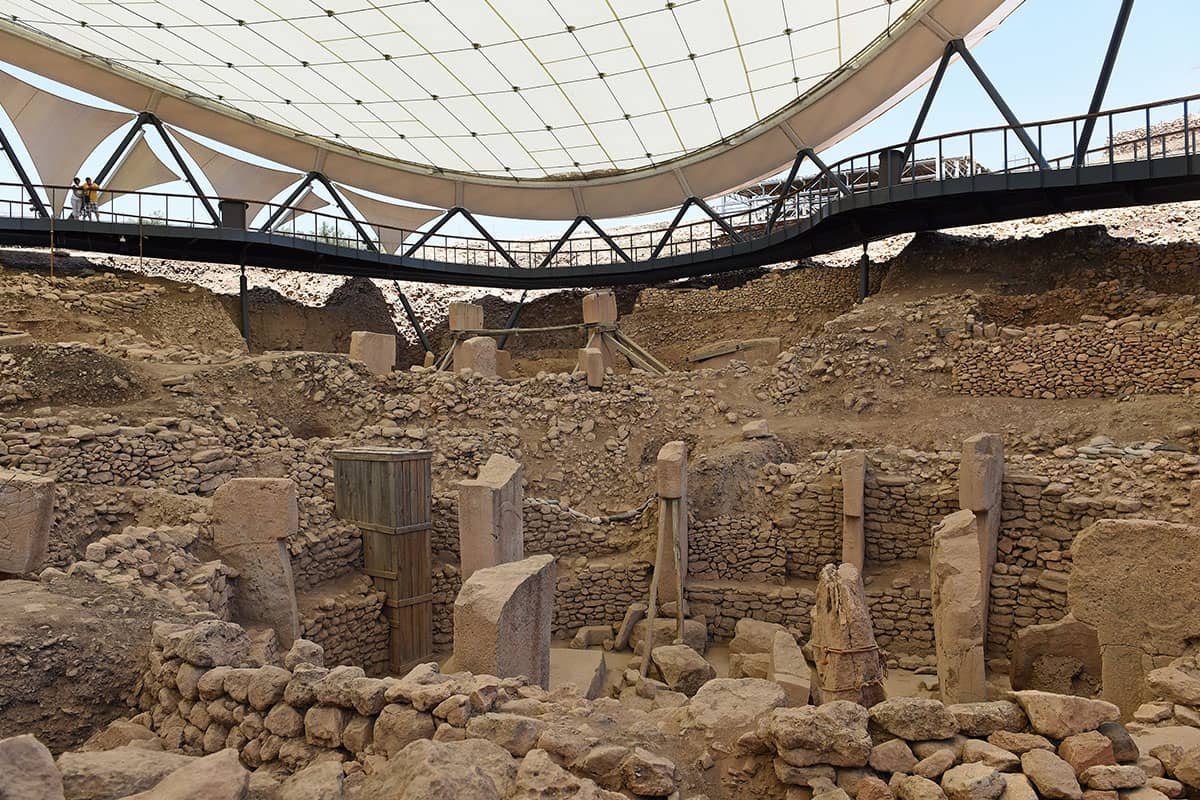 It all started in Göbeklitepe when a mound 15 kilometres northeast of Şanlıurfa’s centre was identified and excavated in the mid-90s, revealing the oldest known examples of monumental architecture on earth, dating back to at least 9,600 BC. The Göbeklitepe findings preceded the Egyptian pyramids and Stonehenge by at least seven thousand years, coming as a shock to most, and demanding the reconsideration of our earliest history.

It may be difficult for many of us to imagine, but our societies were not always as complex as they are today. For thousands of years, before the domestication of wheat and the beginnings of agriculture, people lived in small bands of nomadic hunter-gatherers, foraging for food and migrating to survive. The world was not always an accommodating place due to periods of inhospitable climate. The new Holocene epoch began when the last Ice Age ended around 10,000 BC. As enormous glaciers melted, new habitats emerged for the survivors in the region known as the Fertile Crescent, a crescent-shaped land spanning most of the Middle East, including the sources of the famous Tigris and Euphrates Rivers in southeastern Türkiye.

Until the discovery of Göbeklitepe, most researchers believed that the Neolithic Revolution took place when this gradual warming allowed people to begin cultivating plants and herding animals, thus forming the first complex societies. Today, researchers understand that the Neolithic hunter-gatherers who lived around Şanlıurfa did just the reverse, settling first and farming much later when the growing population necessitated a stable food supply.

When you visit Göbeklitepe, a UNESCO World Heritage Site since 2018, it’s hard to tell the surrounding Harran plateau was once a hunter-gatherer’s heaven with an abundance of wild plants, fruit and nut trees, as well as animals, including lions, panthers, wild oxen, gazelles, and migrating birds -all nourished by the sustaining rivers. Images of such flora and fauna have been carved on T-shaped limestone pillars erected in several circular enclosures - determined by scholars to be the world’s first temples. These T-formed pillars with reliefs are not seen anywhere else on earth. They are unique to Göbeklitepe and the handful of nearby Neolithic settlements unearthed in recent years. Though less than 10 % of the Göbeklitepe mound has been unearthed today, geomagnetic surveys of the site show that more megalith rings are indeed buried here. 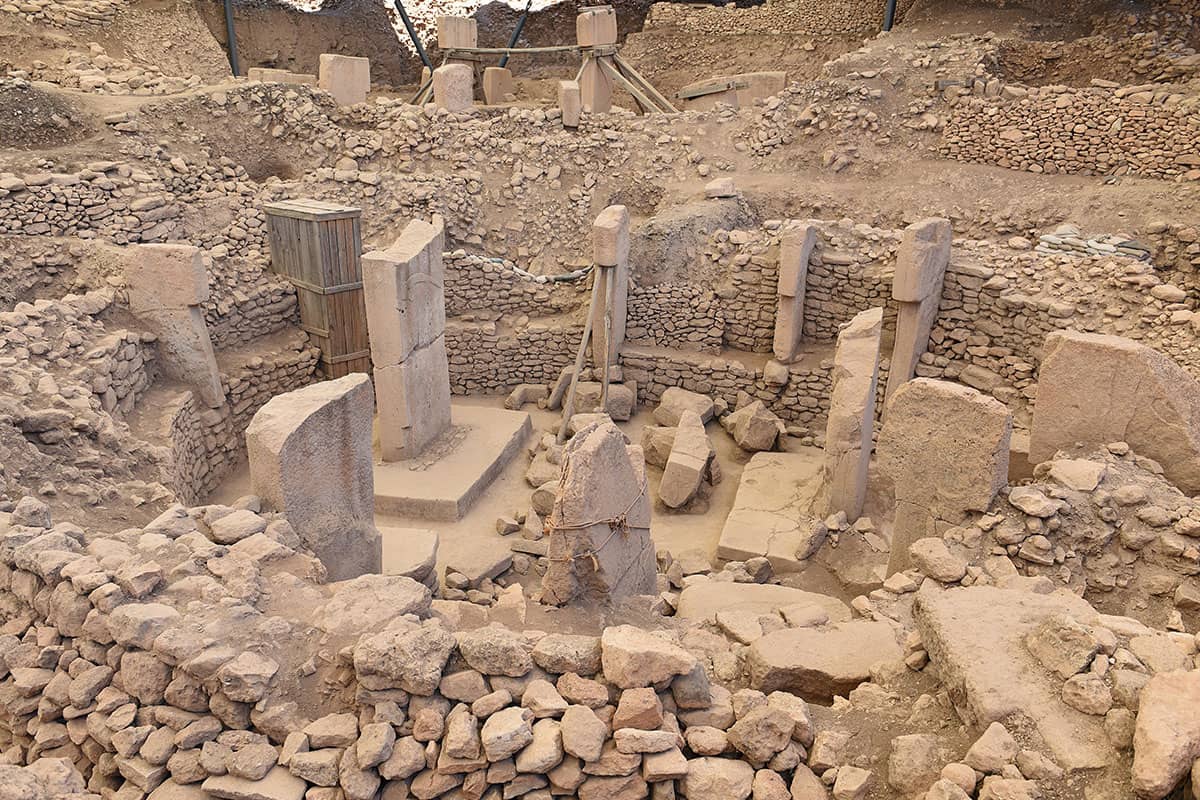 Göbeklitepe’s transformation from a remote mountaintop archaeological find to a major tourist attraction was a fast one. When the first publications on Göbeklitepe came out in the 2000s, people started flowing in from far and wide to behold “the birthplace of civilisation”. They were astonished to see how these T-shaped pillars, each measuring some 5 meters and weighing up to 15 tons, had been erected without any metal carving tools or domesticated animals to haul the massive loads. Such a large-scale project required the coordination of hundreds of workers, eventually leading to the first settled communities in the area.

Although traces of permanent habitation are absent in Göbeklitepe, there are clues suggesting that people gathered here for extensive rituals and feasts, consuming hardy amounts of wild game, as evidenced by the fragments of animal bones found on the site. Over time, the need to feed the crowds which worked and gathered for ceremonies at Göbeklitepe may have led to the domestication of plants and animals. Scholars have found traces of einkorn wheat (the first wild cereal crop domesticated by human beings) on the slopes of Karacadağ, a mountain roughly 100 kilometres northeast of Göbeklitepe.

Today, the central monuments of Göbeklitepe are covered with state-of-the-art fabric and steel structures. Şanlıurfa Archaeology Museum was expanded in 2015 to serve as a dynamic conservation space, featuring a full-scale replica of the site's largest enclosure and a display of the rare stone sculptures unearthed in the region. Urfa Man is perhaps the most famous of these formations. It is the oldest life-size statue of a human being that was found in a similar mound in Şanlıurfa centre, near Balıklıgöl (Abraham’s Pool), proving the ability of early Neolithic people to sculpt the human body naturalistically. 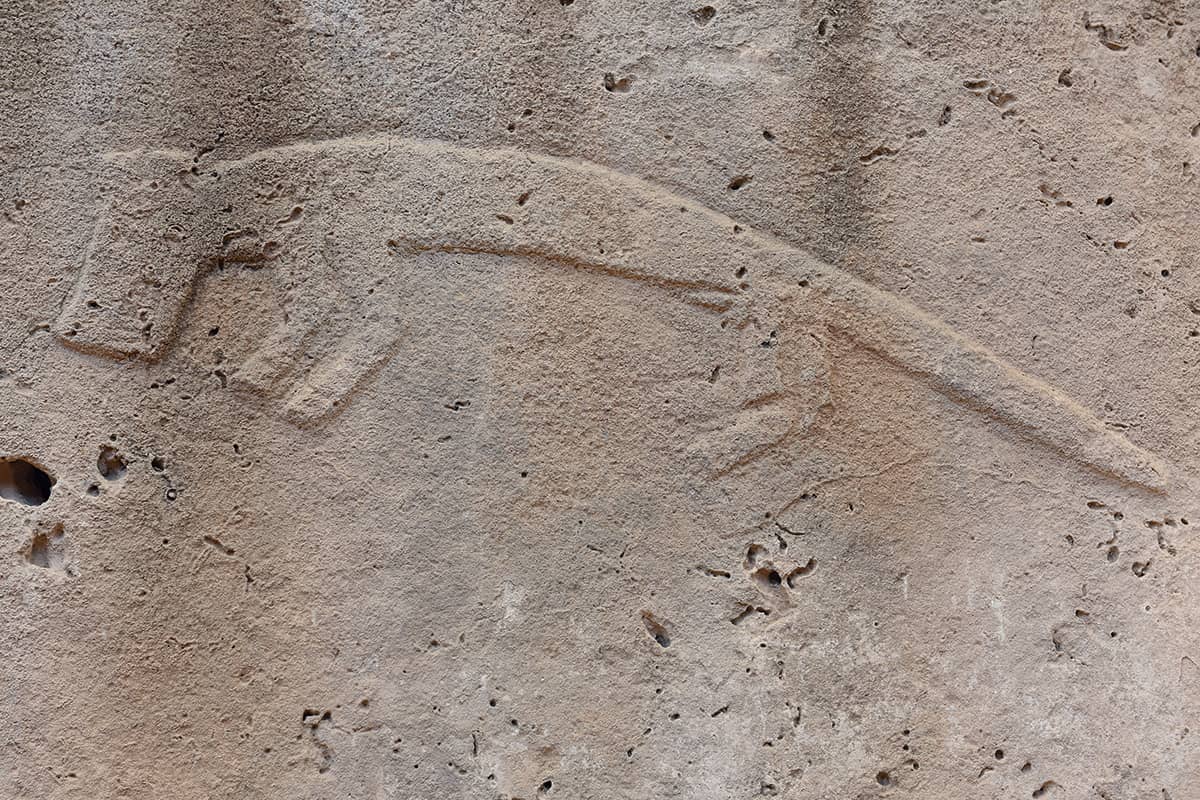 Archaeologists have recently identified at least a dozen additional hilltop sites near Göbeklitepe with smaller T-pillars dating from the same period. The discovery of Taş Tepeler indicates a larger community united around a common faith between 12,000 – 8,000 BC in an area extending some 200 kilometres. With the first examples of sedentism and specialised forms of labour (like artistry), the inhabitants of these Pre-Pottery Neolithic collectives were the first to experiment with more complex forms of social organisation and acquire new dietary habits. Recent excavations have also shown the emergence of pictograms in this developing culture.

Karahantepe is yet another hill-top settlement recently opened to visitors, with a history likely older than that of Göbeklitepe. Although excavations began in 2019, there is much to see already in Karahantepe, where archaeologists have unearthed a circular chamber cut into a rock bed, with several T-shaped pillars supporting the roof structure, similar to those found in Göbeklitepe. In a smaller interconnected chamber, eleven curious phallic columns have been discovered, overseen by the watchful eyes of a human face carved into the adjacent stone wall. The newly uncovered structures are thought to have been used for the ancient sacred rituals conducted in a cave-like setting, where the play of light and shadows undoubtedly bestowed a mystic, otherworldly ceremonial atmosphere. Differing from Göbeklitepe, Karahantepe was proved to be a permanent enclave where a residential area with daily household items was also found. More human depictions are also carved in Karahantepe, alongside the animal figures characterising Göbeklitepe. 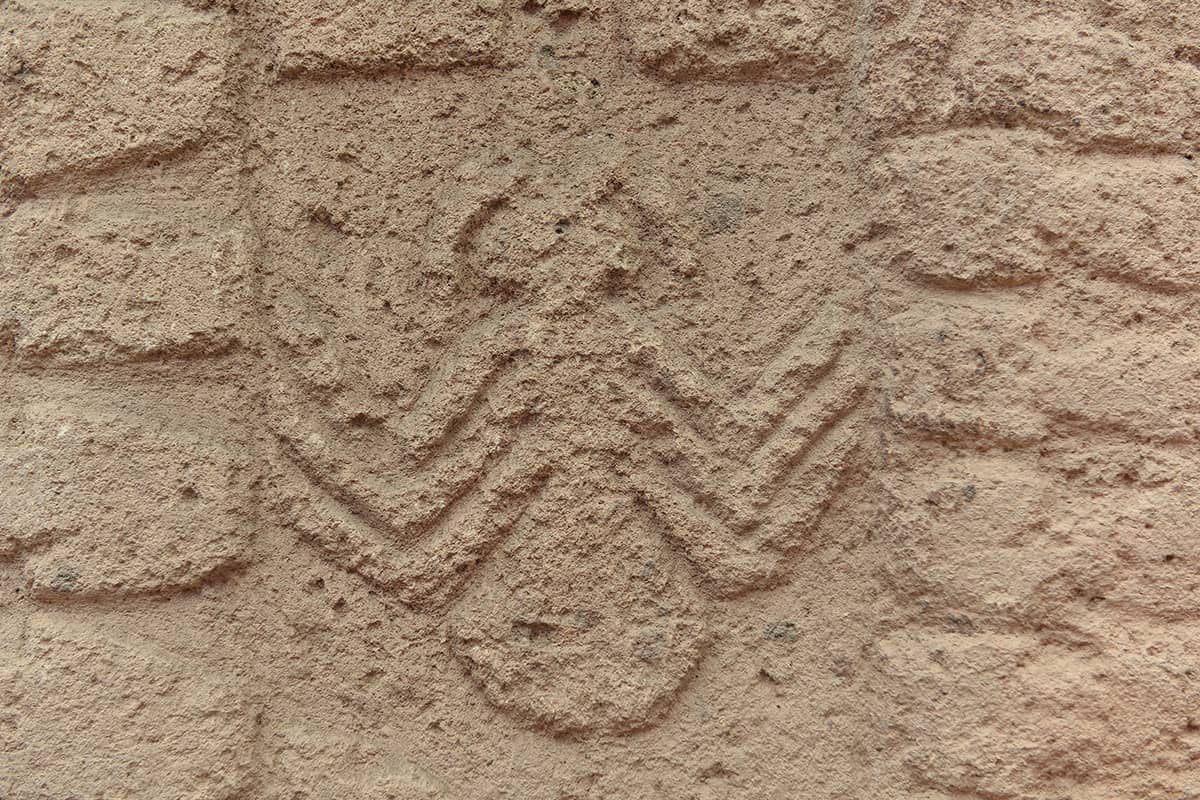 Sayburç, was more recently rediscovered in 2021. It is thought to be contemporary with the late periods of Göbeklitepe and may play an essential role in our understanding of this once-flourishing culture in the region. In Sayburç, an impressive five-figure carved depiction has been uncovered - showing humans, leopards and bulls in a life-or-death struggle.

As highly dedicated excavations continue in Taş Tepeler, the archaeologists answer new riddles at each step. So far, we have learned that inhabitants lived in these communities continuously for about 1500 years, with remnants of their successive infrastructures forming several layers on top of each other, enabling these sacred structures to remain intact for millennia. The motivation to eventually abandon these homesteads is still obscure to us. Scholars suggest that the residents may have evolved from their hunter-gatherer culture, a change so drastic that Göbeklitepe and other hill-top vestiges no longer served their material and spiritual needs. Thankfully, these ancient settlements have found their new mission today, enabling us to discover a missing link between prehistoric times and our modern world.