Roman mosaics of City of Flavians in ancient Cilicia

A discovery of a mosaic entails a series of information regarding the period of production; it gives us understanding on how people used to dress, where they would live, how their cultural interactions would be, and the economic circumstance they would be in.

Floor mosaics are symbols of status, wealth, splendour, hence power. During the Roman Period, they adorned the floors of houses, villas, public baths, fountains, and pools. The figures and icons chosen from the artist’s catalogue would often match the narratives depicted by its contemporaries.

A recent excavation, taking place in the province of Osmaniye in the Eastern Mediterranean has revealed another great example of Roman mosaics in Anatolia, sharing a similar tradition with its peers unearthed in Zeugma, Antakya, and Ephesus.

The last Roman city founded in the Cilicia Pedias region after Vespasian took power in 73 AD was Flaviopolis, named possibly after Flaviens, the family of whom Vespasian was a member.

According to the accounts from the late 19th century, the ancient settlement of Flaviopolis was visible by eye then, where one account depicting the walls of the city stretching along the Savrun River, whereas the second describing the remains from the city Forum being utilized in local house constructions. This is no surprise, since until the second half of the 19th century, the area was virtually vacant; however, when the military intervention for the settlement of nomads in the second half of the 19th century was carried through, the area was quickly populated and urbanized.

There are three historical moments in which the first glances into the history of the ancient settlement were made. First, with an inspection during the construction of a cesspool revealing a 2-meter Bronze Bust of Hadrian in 1932. Second, as one of the most important mosques converted from a Roman Church built in the Late Antiquity in Anatolia, Ala Mosque is still preserved, the brief excavations in 1947 and 1961 unravel some mosaics under the mosque complex. And the last one is thanks to the probing activities carried out by the Osmaniye Museum in 2015 close to an area to Ala Mosque. In as small space as 100 square meters confirms the existence of the ancient settlements of Flaviopolis, which is now almost completely under the modern dwellings.

Archaelogical excavations on site revealed some of the most remarkable findings. Foremost among these are the three large mosaics of mythological stories and scenes from the wild life and nature: Passage of Nereids and Cassiopeia and Tritons, Seasons and Animals, and the Lion Hunt of Aeneas and Dido.

In the excavated site, you step into a Roman villa. The water infrastructure, the clay pipelines that carry water to the villa, a courtyard (atrium) where an ornamental fountain is situated (impluvium), a large hall for festivities (triclinium), and rooms for fireplaces, studios, and a little public toilet (latrina) are all visible on account of the work done by the Osmaniye Museum.

What dazzles one upon seeing the mosaics is the quality of the workmanship; built with a realist style and painted with a large range of colours, the mosaics are placed in an order in the courtyard following a path into the large hall. 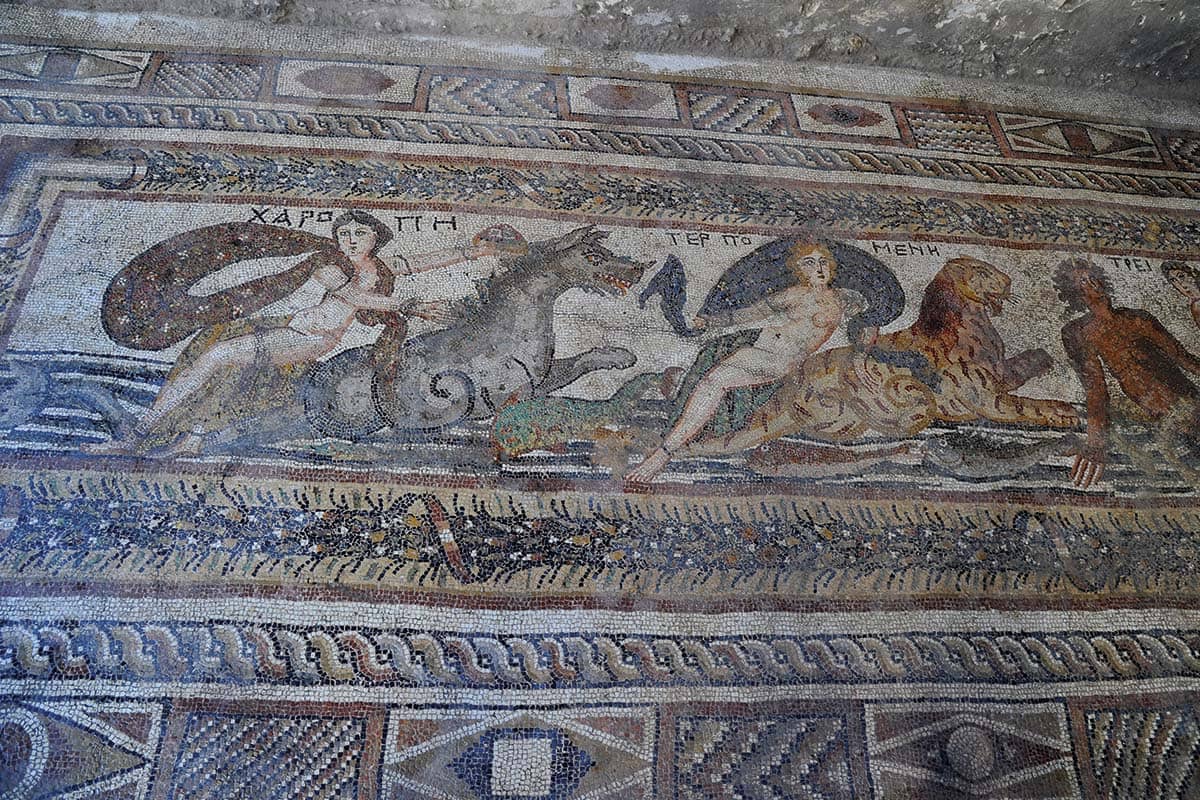 As you enter this villa, your journey begins by the encounter with three sea nymphs called Nereids, almost completely naked. They wave a piece of garment from their dress, and they are depicted as they ride wild beasts on top of the waters. 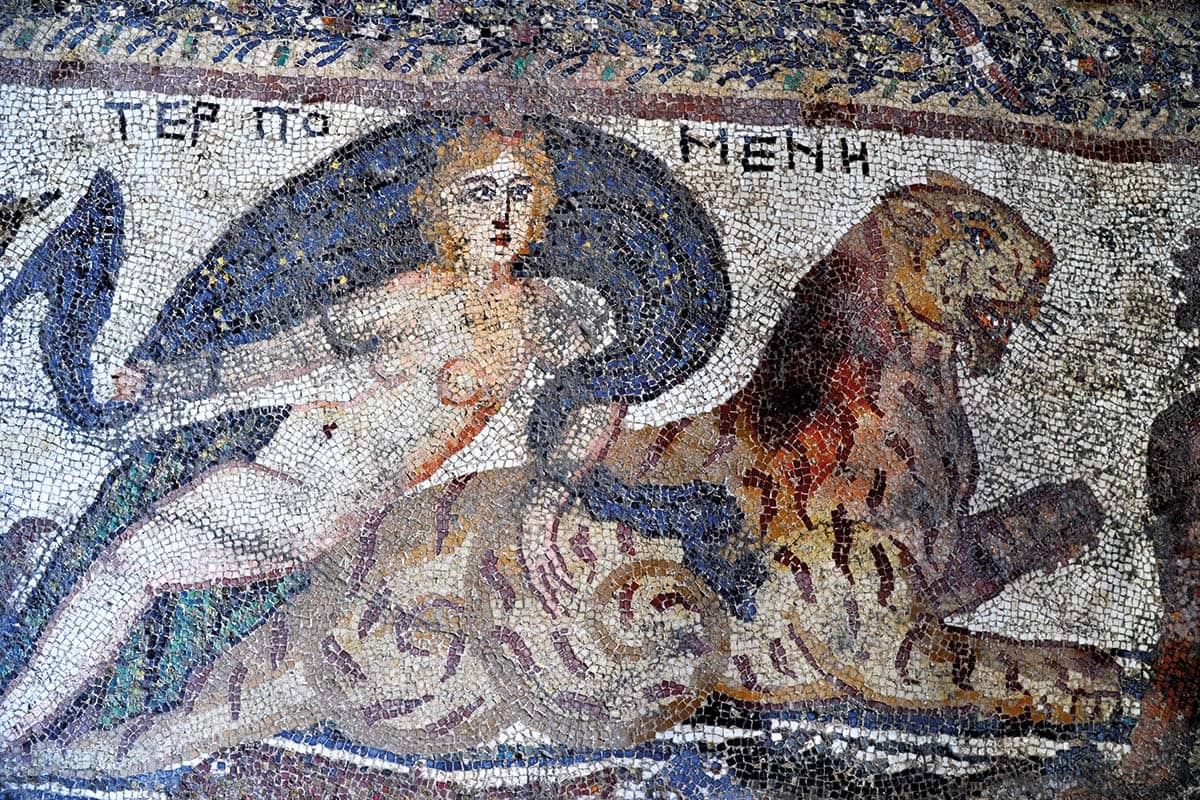 As we look, charmed, at their beauty, where their names are still preserved, İksaropieh, Terpiomeneh, and Treitonis, we see Cassiopeia, who was claimed to have more beauty than anyone including Nereids, and is actually crowned so. 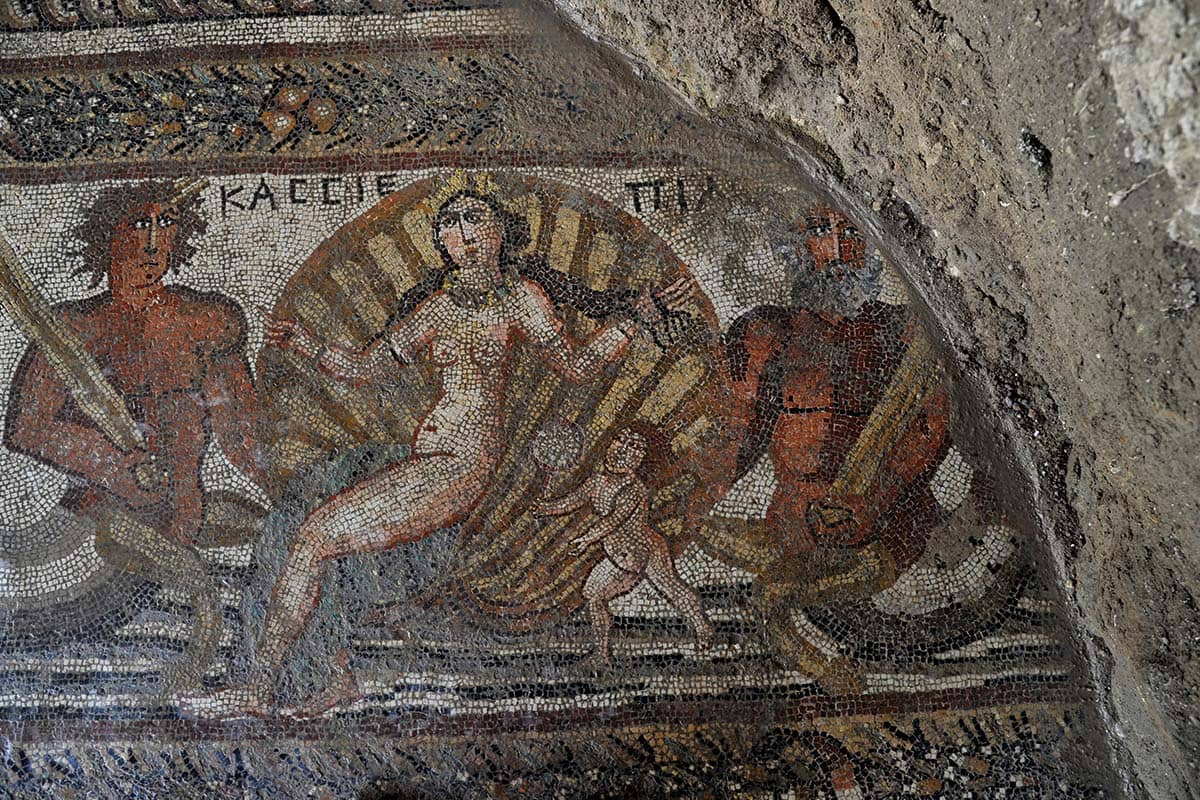 This scene is the first in Anatolian records. The two Tritons, sea beasts that have fishtail, horse legs, and horns from lobster chelas, are guarding Cassiopeia, placed in an oyster similar in allure to Botticelli’s Birth of Venus, as she revels becoming a beauty queen. 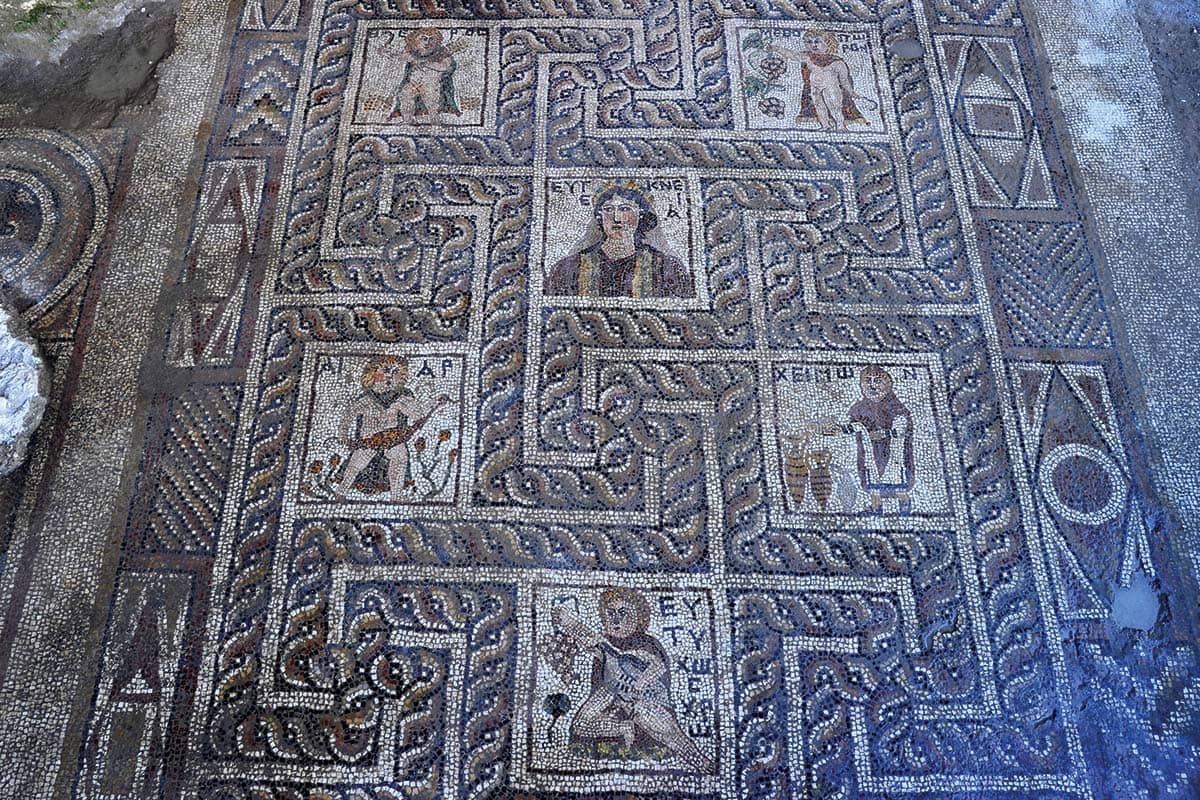 When you move from the Nereids, you see the farthest edging of the mosaic follow the next one, which follows another, and then another. All the mosaics are connected by their edgings in a meandering line, and they each depict a different story. The second in line is the personification of the Seasons. This is a common image, an allegory, usually depicted with grapes, sickle, wheat, flowers and thus showing the harvest period, pointing to the general representation of the seasons. 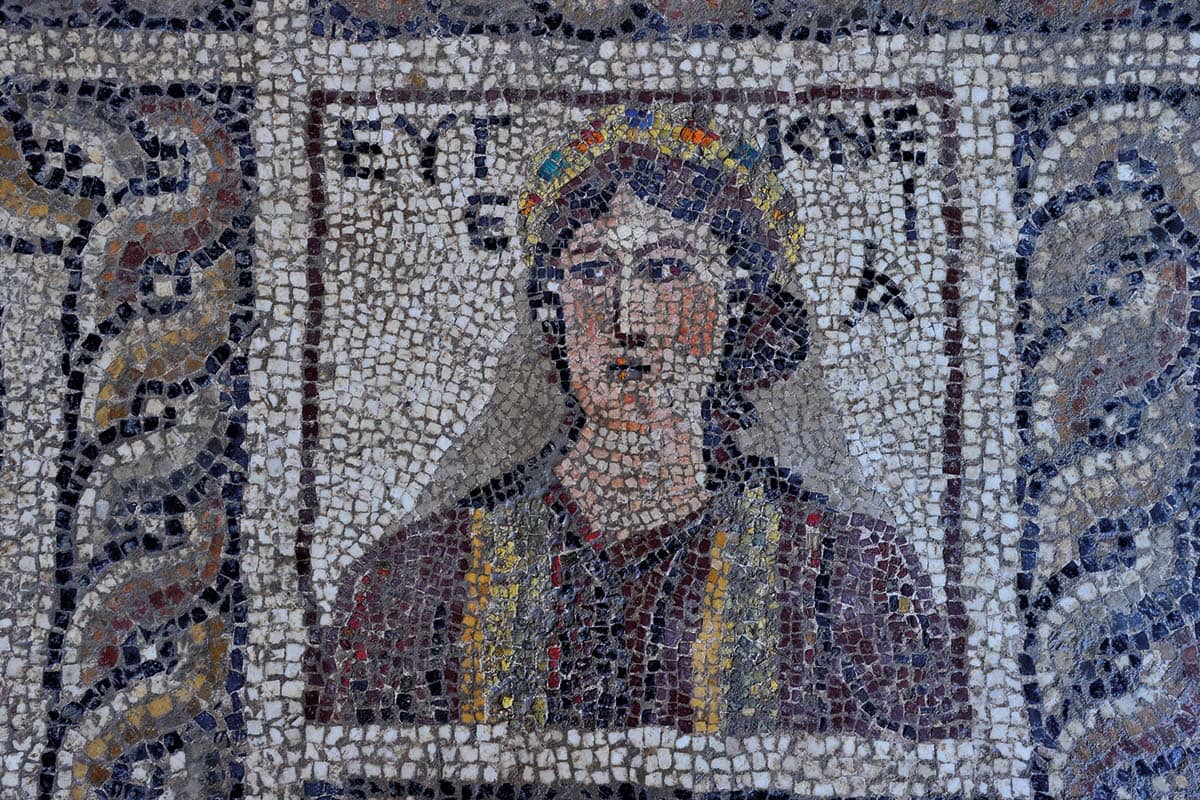 Table 5 Figure of a Eutekneia (Elite,  Eminent) Woman in Detail Situated in the Middle of the Season's Mosaic

The Seasons are followed by the Animals mosaic, revealing information about the fauna known to people in the time of production of work.

And then comes the Hunt. Also, another first in Anatolia, you can see the lovers who are madly in love on a Lion hunt, where even the blood of the wounded animal can be viewed in its finest detail. The mosaic depicts Aeneas, the hero destined to reach and find Rome, a Trojan who had left his homeland after the Trojan War. And Dido, the dignified queen of Carthage, who would commit suicide for her unrequited love after the departure of Aeneas and his son from his first marriage: Ascanius.

From here, if you move into the dining hall, you can encounter an enchanted Dionysian, a secret member of the cult of Dionysus, a Maenad dancing by herself. It is noteworthy how for the depiction of this Maenad’s attire, sole on her own, glass turquoise tesseras were used. The same can also be seen in Aeneas’s garments as well. This is the artist, focusing your gaze on where he wants your attention to be.

Zeugma - The Wedding of Poseidon and Amphitrite Example 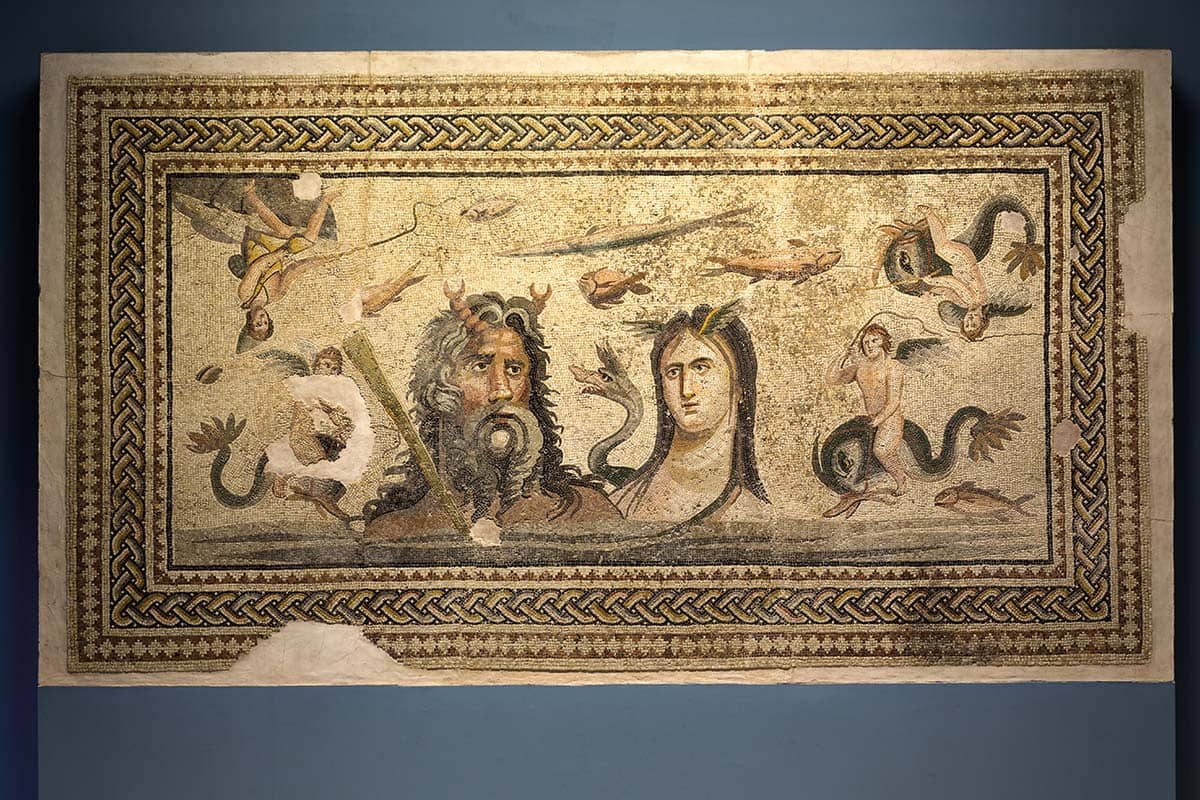 The quality of the works is a match for the Zeugma and Hatay mosaics. As from what is but a scratch of a dent on the surface of the ancient settlement of Flaviopolis, so much is already come to the sunlight, bringing a treasure from the past to our day in only a 3-year span. Therewith, it is hoped that the delicate work done by the Osmaniye Archaeology Museum save more artefacts for us all to see, to revisit the rich lands of the Anatolia, at whose bosom many more traces from several different civilizations are still hidden.