Roaming the Lands Where It All Started

The Anatolian lands have been home to many civilizations for thousands of years, thus cradling many cultures. Every legacy has played its part in enriching the area, and today uncovering these layers bestows the wanderer with mesmerizing stories. Following the history of human itself, we find ourselves listening to the narrative of grapes, taking a journey beneath their silky exterior.

Today, Türkiye holds a unique position in being one of the most archaic wine destinations. The history of wine in Central Anatolia extends way back to the Neolithic communities. Corks from the 17th and 18th century BC discovered during excavations are believed to be used as wine vessels for storage or drinking, and the archaeological findings held at the Museum of Anatolian Civilizations in Ankara prove this belief to be true. 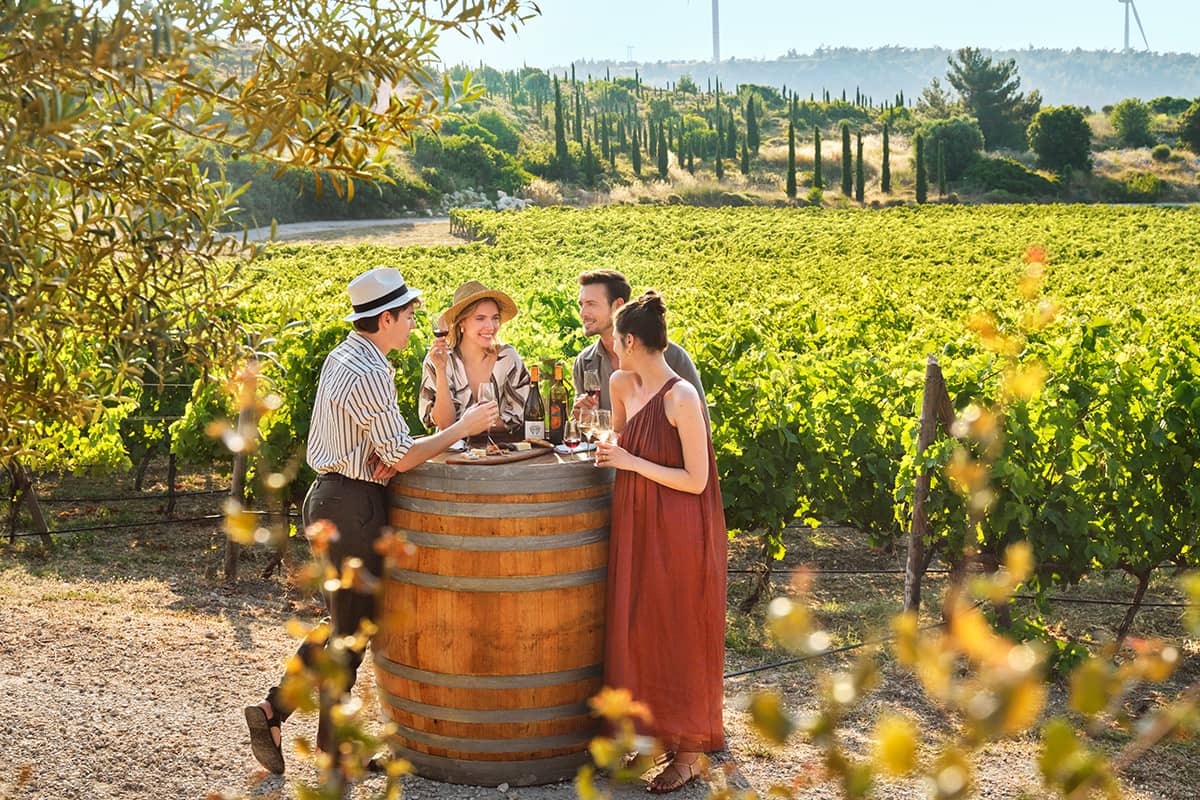 Wine played an important role in the social lives of The Hittites, one of the oldest civilizations of Anatolia. Offered as the primary drink in ceremonies that the royal family and executives attended and celebrated during the grape harvest season, the cultivation and harvesting of grapes, also known as viticulture, is protected under the Hittites laws… These all make clear that wine had immense importance economically and culturally. In the following period of the Hittites, another Anatolian civilization, the Phrygians, had wine as an inseparable part of their daily social lives too. Fast forwarding to the 6th century BC, the ancient cities of Tabai and Klazomenai in the South Aegean and Ainos in the North were busy production and trade centres, exporting their goods all the way to France and Italy. Even though the use and sale of alcohol were prohibited in the Ottoman Empire for some periods, the taxes on wine sales were still an important source for the treasury. So, any long-term prohibition would contradict the state’s interest. 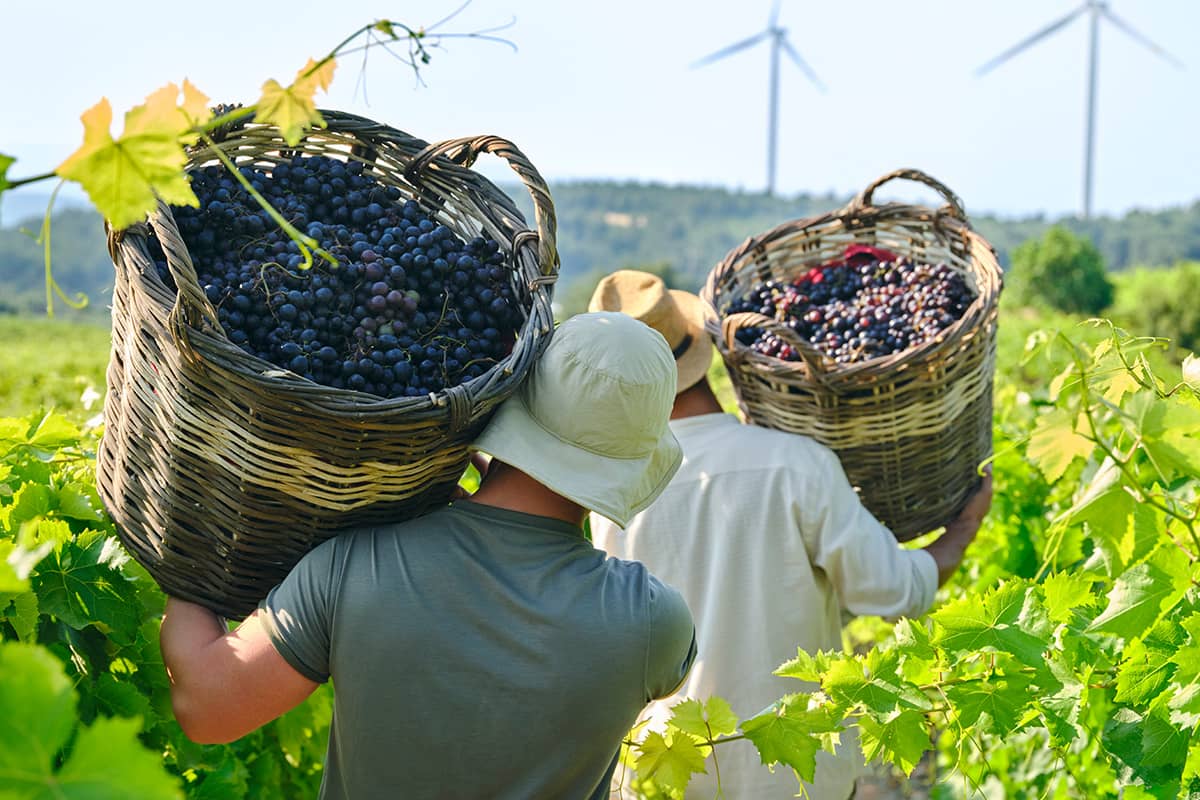 In the second half of the 19th century, wine production reached an all-time record, for there was liberty and tolerance that modernization brought, and the alcohol ban was lifted entirely. Today, deep-rooted wine firms and boutique producers allow Türkiye to produce and consume wine in large amounts. Öküzgözü, Boğazkere and Kalecik Karası in red, Emir and Narince in white are quality wine grapes characteristic to these lands. European grapes such as Gamay, Cinsault and Semillion do also grow in Türkiye. Also, starting from the 1990s, popular grapes such as Chardonnay, Sauvignon Blanc, Cabernet Sauvignon, Shiraz and Merlot have been planted, tested and became members of the rich wine catalogue Türkiye now holds. Having a young population, Türkiye now experiences a substantial increase in quality and in wine enthusiasts. It’s such a delight for a wine enthusiast to watch the industry take off and return back to its “homeland”, so to speak. The routes we’re about to discover offer different flavours and experiences, allowing you to take a rooted journey among the vineyards bursting with life.

Thrace, with its shores opening up from the Aegean, Marmara and the Black Sea, floodplain forests, inviting towns and fruitful vineyards, is a must for wine aficionados who just can’t get enough. The Thrace Vineyard Route brings together 12 boutique wine producers located in four main areas: Kırklareli, Tekirdağ, Şarköy and Gelibolu. Another remarkable stop that shouldn’t be missed is Avşa Island. Having its own microclimate in the middle of the Marmara Sea, she parades its delicious wines. With its winemaking history dating back to the 1800s and its unique terroir nourished by the wind, slopes and sandy-clay soil, Avşa Island nestles the youngest and most ambitious wine producers there are. So better hop in your car! Your destinations await only a few hours from Istanbul. You’ll be roaming between the grape-bearing vines in no time. 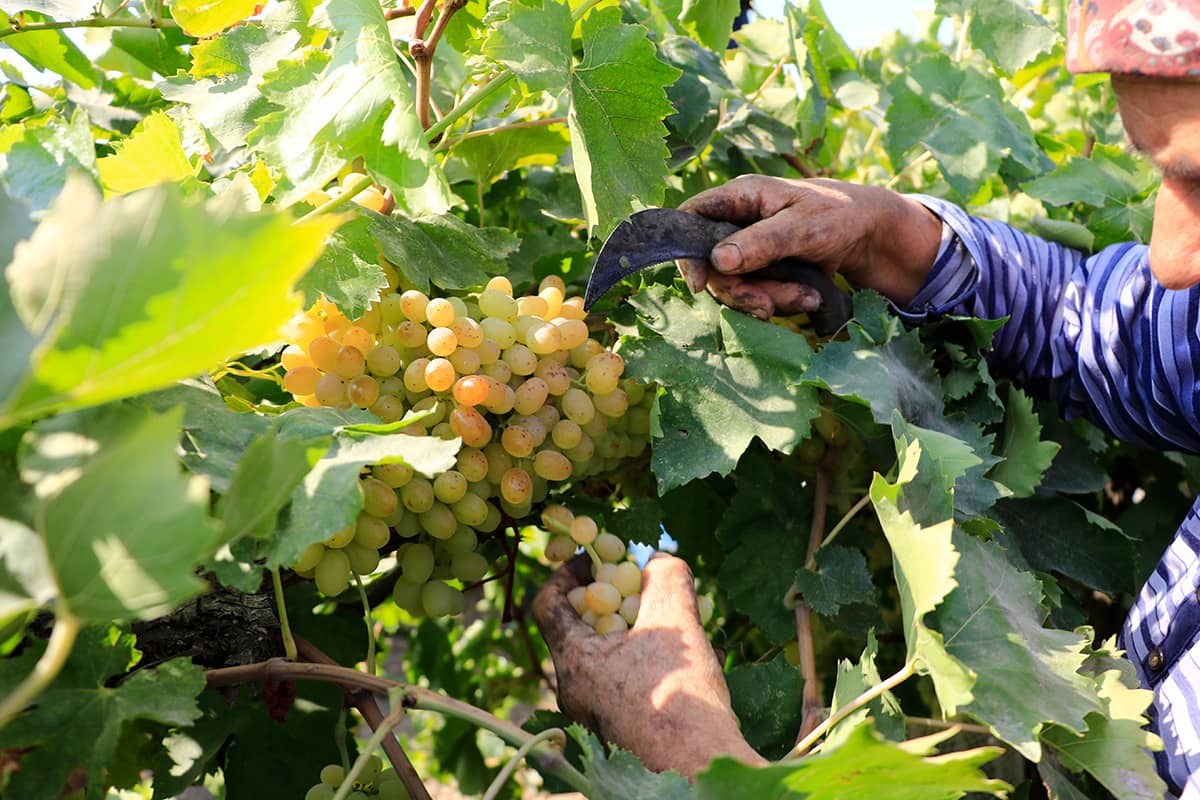 Throughout ancient history, vine cultivation has brought irreplaceable energy to these idylls. Warm summers, gentle winters and high humidity rates have allowed the lands to flourish and made winemaking favourable. This area, thanks to its microclimate, has been growing multitudes of grape varieties such as Adakarası, Cabernet Franc, Cabernet Sauvignon, Chardonnay, Cinsault, Gamay, Kalecik Karası, Merlot, Papazkarası, Riesling, Sauvignon Blanc, Semillion, Şiraz and Viognier.

With its 60-kilometre-long beach, Şarköy is the most remarkable stop you’ll make. The richness of the region in terms of viticulture and amphora workshops exhibit that the wine is produced and bottled on-site. Şarköy vineyards have unique soil and slopes running perpendicular to the sea, which makes the best of the night and day temperature difference and gives the wine a rich aroma. The everlasting blow and much-needed dryness before harvesting add more quality to the wine here. All you need is to discover the vineyards of the Marmara region, meet the vignerons who work miracles, sip the nectar of the gods, breathe in the dizzying pastoral life and etch the memories in your mind and soul the land has gifted.

A tradition casting light on its mystic

Sitting just north of the Aegean Sea, Bozcaada –better known as Tenedos in ancient times, 3000-year-old viniculture has been the most significant legacy reaching to this day. The proof lies within: a bunch of grapes pictured on Tenedos coins minted in the 5th century BC, many written sources from the Iliad to the Book of Travels by 17th-century Ottoman explorer Evliya Çelebi. The northern winds gifted by mother nature have made this small Aegean island perfect for vine cultivation. There are four endemic types of grape here: Kuntra and Karalahana for red, Çavuş and Vasilaki for white. Mostly a table grape, Çavuş is the prime example of how good Bozcaada grapes can get.

Today the wine producers in Bozcaada, make balanced and well-defined wines by making the best of the magical lands. One other thing that shouldn’t be missed here concerning wine is the grape harvest festivals. Now it’s a tradition where vine dressers, islanders and wine enthusiasts come together and celebrate the yearly labour. All wine lovers hop on tractors and make their way to the vineyards. Here, fresh grapes get harvested and are brought back to the island square in large baskets via horses, donkeys and mini tractors called “pırpır”, just like the way it has been done for many years. Intelligent crows, alluring vineyards, lush gardens, honey dripping grapes and wind humming a song you’ve never heard before, come together and form the mini universe that is Bozcaada. You bet there’s no comparison to what you’ll feel getting to know one of the most amazing historical geographies in the world through its wine culture. 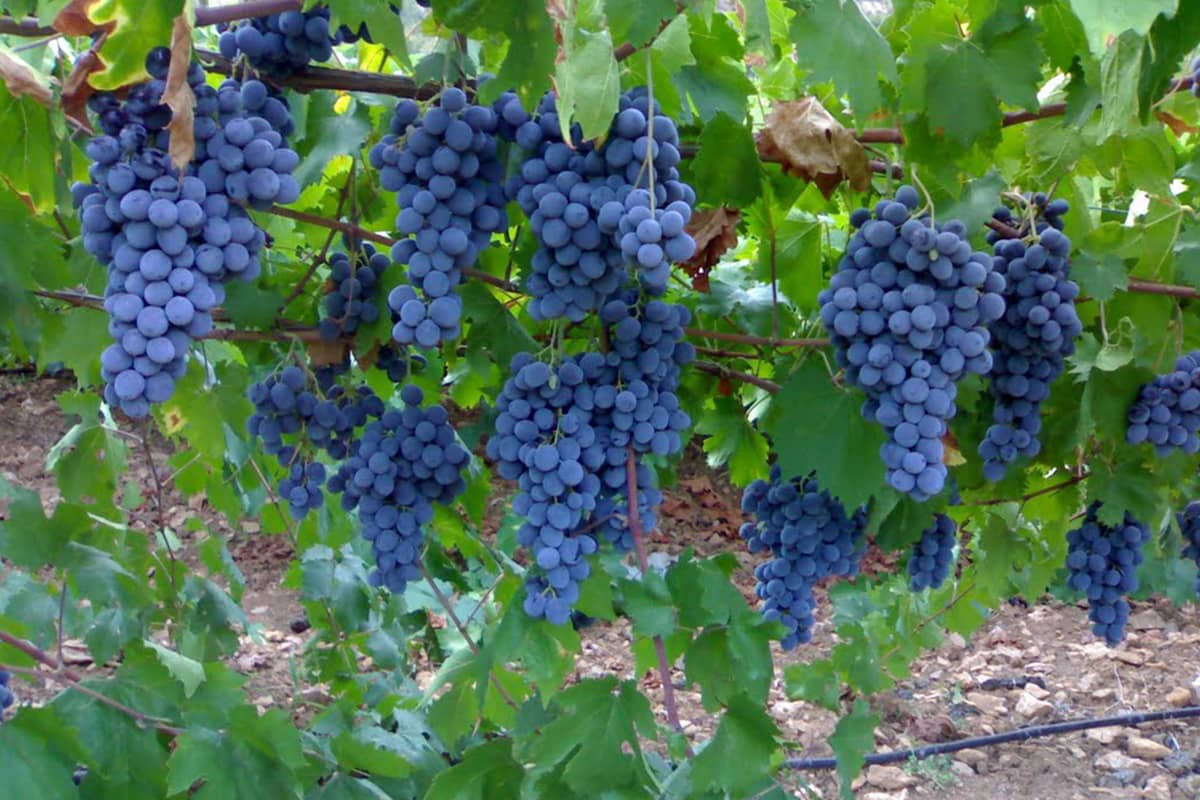 The geography, climate, and soil characteristics of Central Anatolia differ from the Aegean region, thus making the grapes and, eventually, the wines a whole lot different. From this point, it’s possible to say that Türkiye produces wine for every palate, for it celebrates a year with four seasons and differing climates. Cappadocia is the heart of viticulture in Central Anatolia, and from here, all the way to the southwest to Diyarbakır, you’ll encounter grapes thriving fearlessly.

Capadoccia, with its rooted winemaking tradition, has made its name with its white wine produced with local Emir grapes –certainly making it the star of these lands. This area owes its famous vineyards to its soil, blended with natural volcanic tuff. That’s why Anatolian grapes such as Öküzgözü, Kalecik Karası, Boğazkere, Narince, Emir and European grapes such as Cabernet Sauvignon, Chardonnay and Sauvignon Blanc bloom and grow in the most perfect way. Another thing that’s helping wine production here is the volcanic rock structure being not so hard, so that it can be carved and used as a vault for wines. The wine houses here in Cappadocia producing top-notch quality wines are open for exploration every month of the year. After all, Cappadocia is beautiful all four seasons with its dizzying landforms, gentle nature, valleys, churches, hiking trails that combine nature and history, and boutique hotels carved into the soft rocks… 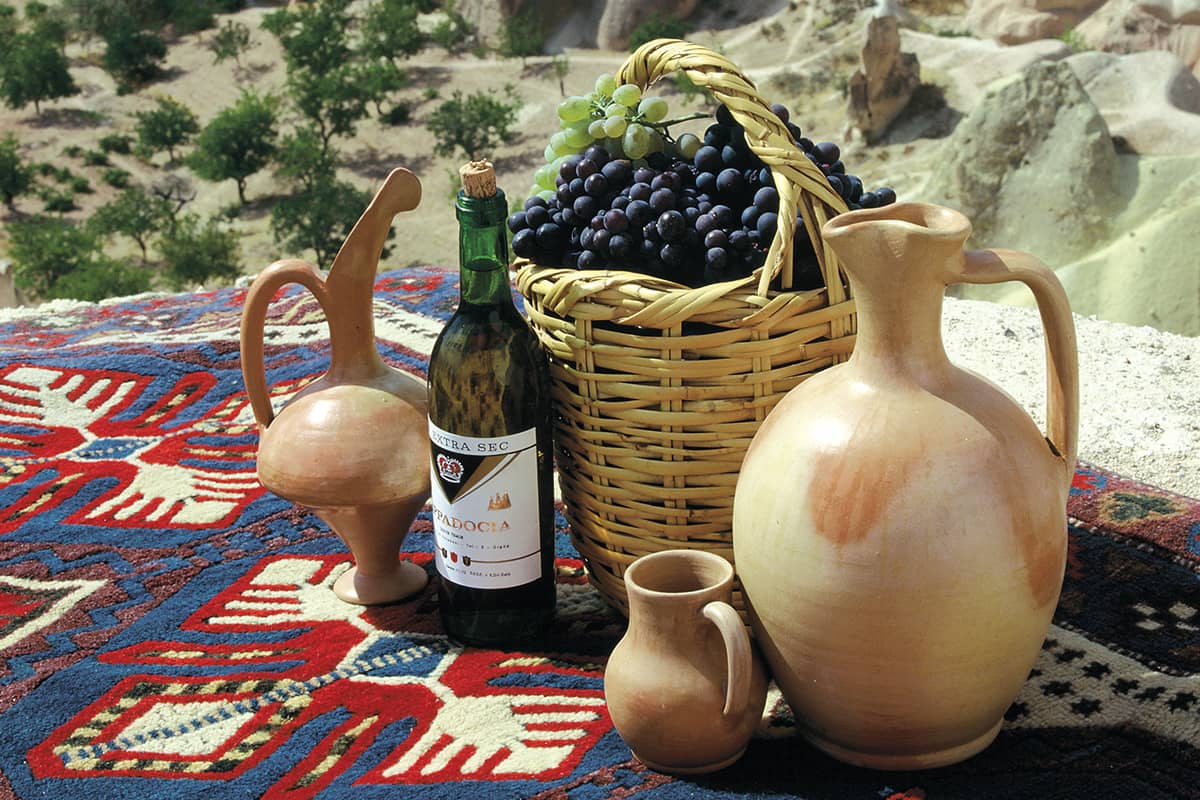 A rhapsody of colours

Making your way to the Urla Wine Route, you’ll be cradled with soothing sceneries. Characteristic country houses weaved with looked-after stone houses, wine estates gracefully making contact from afar, palm trees and horse ranches… The land signals its fertility right on, with palms scattered all around, surrendering itself to the warm glow. Once at the vineyard, you’ll realise red bead-like grains, showing off their vigour through the vines, announcing harvest time. The serene town of Izmir is one of the most enticing destinations, with its ever-developing viticulture and Urla Wine Route opening up new horizons just by its magnetic presence. Urla, possessing a strict wine tradition since ancient times, has a characteristic terroir with the advantage of being in a peninsula surrounded by the sea accompanied by a fitting climate, moist soil structure and iodized air.

Urla’s generous vineyards have been carrying on a wine tradition with international grapes like Cabernet Sauvignon, Merlot, Syrah, Chardonnay, Sangiovese, and Turkish grapes like Bornova Misketi and Sultaniye. Considered a lost grape variety in the region, the ancient Urla Karası was reproduced in the vineyards here. Urla Karası and the Italian grape Nero D’Avola coupage gave birth to one of Urla’s signature wines. Foça Karası, another ancient and extinct grape unique to these lands, were reproduced and brought back into the game. Wineries using the flow technique via natural gravitational force, vineyards and wines stripped off of chemicals, and good agricultural practices made the details that allow the region to differentiate itself. A handful of visionaries and entrepreneurs made it possible for the Urla Vineyards and its wines to reach their well-deserved glory and have made Türkiye’s world-class winemaking visible through prestigious international awards.

With pines and fruitful woodlands surrounded by the Aegean breeze, Urla lays the ground for the perfect environment for vine cultivation. The minerals swayed from the sea meet the rich soil and allow the grapes and wines to be known as “the taste of the world” – just like it deserves. If a short and dreamy vacation is what you need, a lovely one you’ll get during autumn and spring. Besides tasting the otherworldly delicious wines, you’ll have a chance to savour Aegean dishes, have walks in serene backdrops, spend time discovering the wine production site and get into the minds of the people who do their work with love. You bet there’s no comparison to what you’ll feel getting to know one of the most amazing historical geographies in the world through its wine culture.