Foça is where the whole of the Mediterranean will open up to you in its full character and show you exquisite views from its depths. Foça is built upon its namesake Phokaia, an ancient Ionian settlement. However, it is known that even before the arrival of Ionians a walled city was built here, dating back to the second millennium BCE. Today, with its nature and multi-layered history, Foça is not merely the right place if you wish to have a great holiday on the coast of TurkAegean, but it is also a place for immersion in history, having been a centre of cultural efflorescence. Further, Foça has recently been added to the Cittaslow list, marking the 21st Cittaslow town in Türkiye. 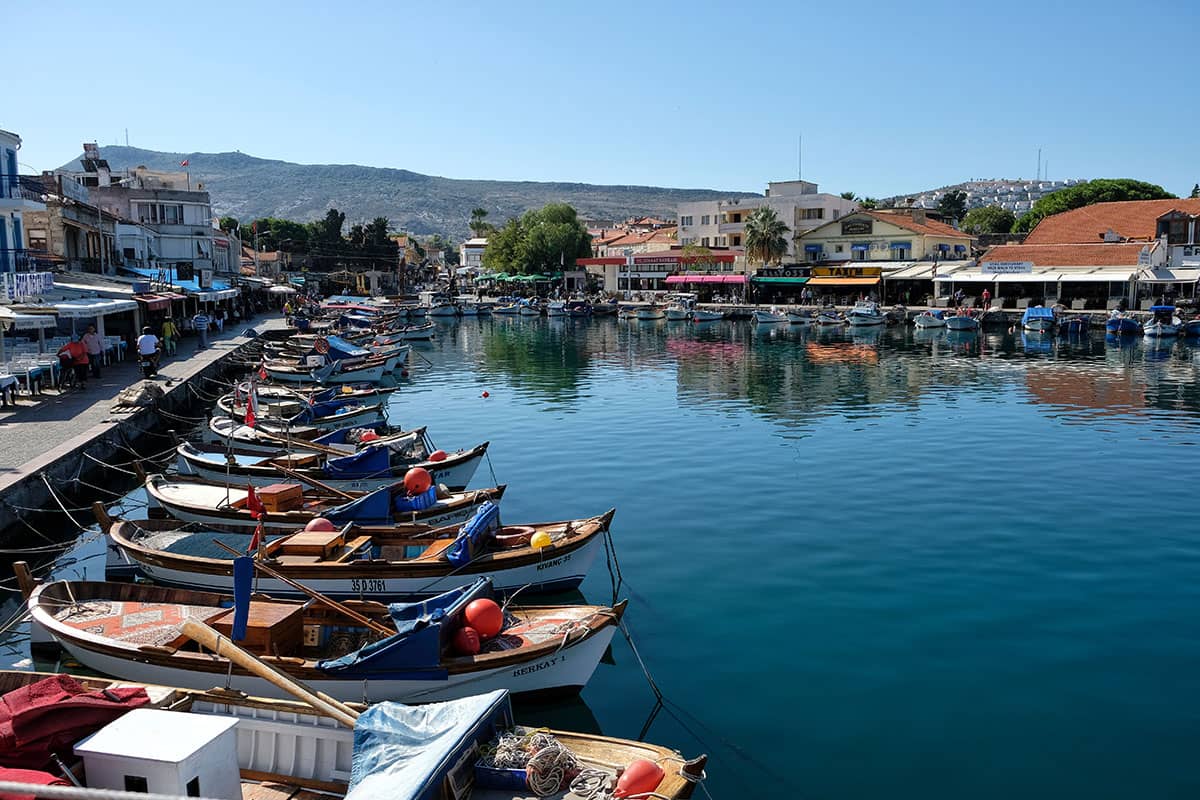 This is one of the most peaceful destinations of İzmir. As you wander by its calm and serene beachside, fishing boats line up as in a still painting with mesmerizing details reflecting on the crystal-clear waters. Engulfed in the dazzling atmosphere of the town and under the influence of the murmur of the waters dashing to the shore on a hypnotising rhythm, Foça is bliss. The waves and the setting sun will carry you to the riches of the TurkAegean cuisine. Foça, with hundreds of cafés, bistros and taverns left and right, hosts a grand feast of taste with its delicious appetisers and various seafood platters. 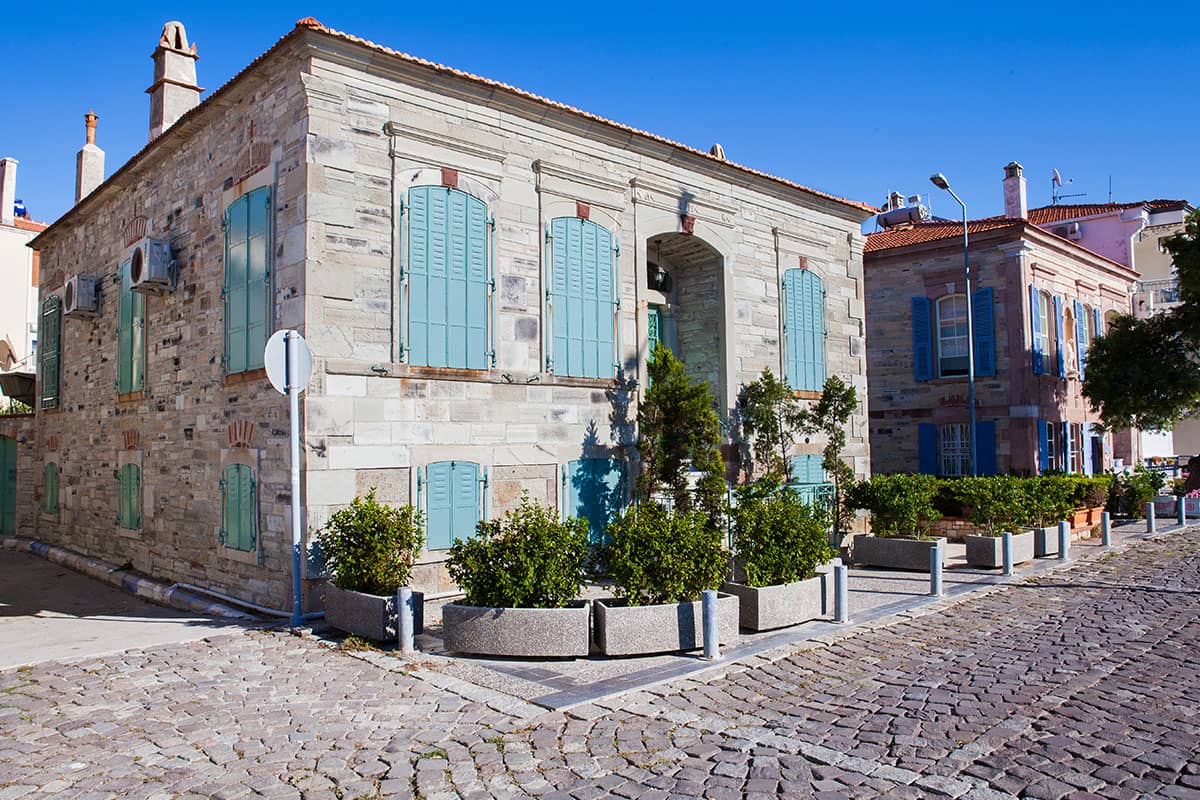 It offers visitors an unforgettable experience in its boutique hotels that have been converted from old stone houses; letting you know that here in the heart of the history, you can have a good time. We have prepared some insider tips for you to know before coming to Foça, İzmir’s Cittaslow Town! 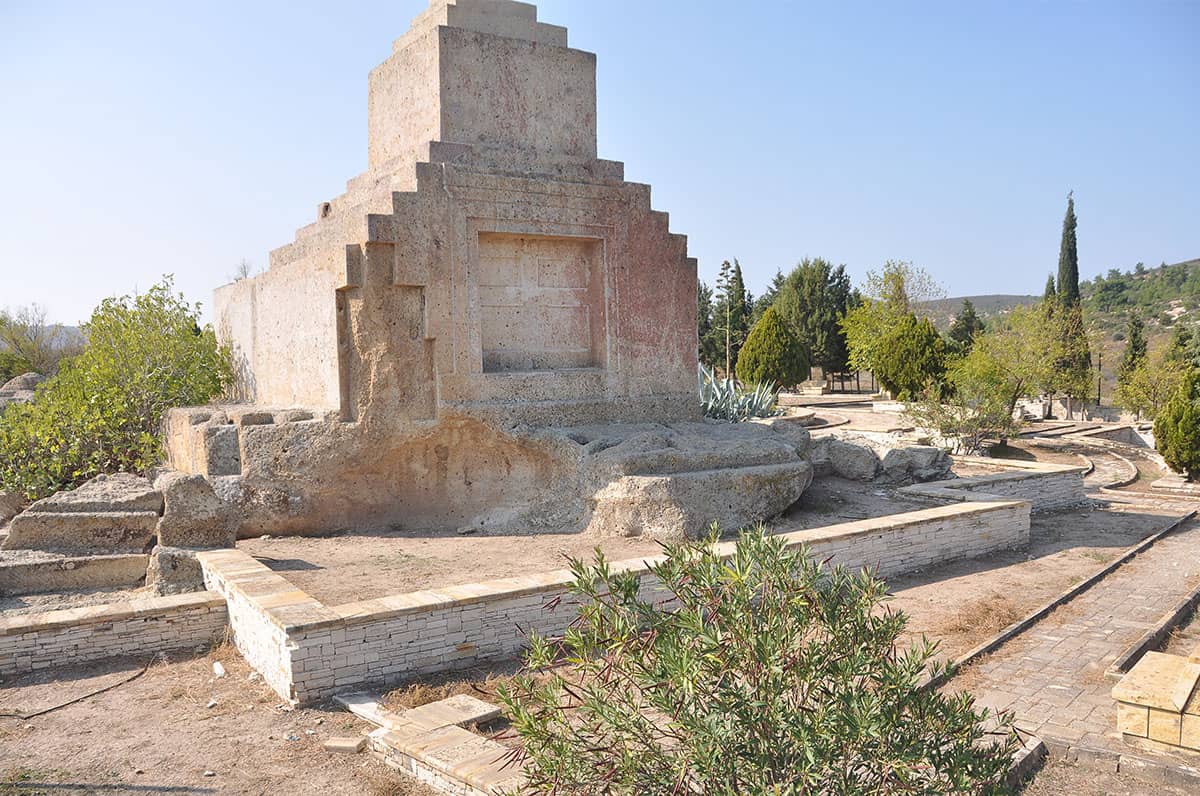 Right on your way to Foça, on the Foça-İzmir road, 7 km to the east of the town, is located the first sight to greet you, the two-storey Persian Mausoleum or simply known as the Stone Tower (Taşkule). It is not exactly known for whom the mausoleum was built. However, it is reckoned that it was built by western Anatolian masters from a monoblock massive tuff stone around 546 BCE, in the aftermath of the Persian expedition on Sardes, right after the Persians took Phokaia. This is the only Lycian-Lydian structure built under Persian influence in Ionia. 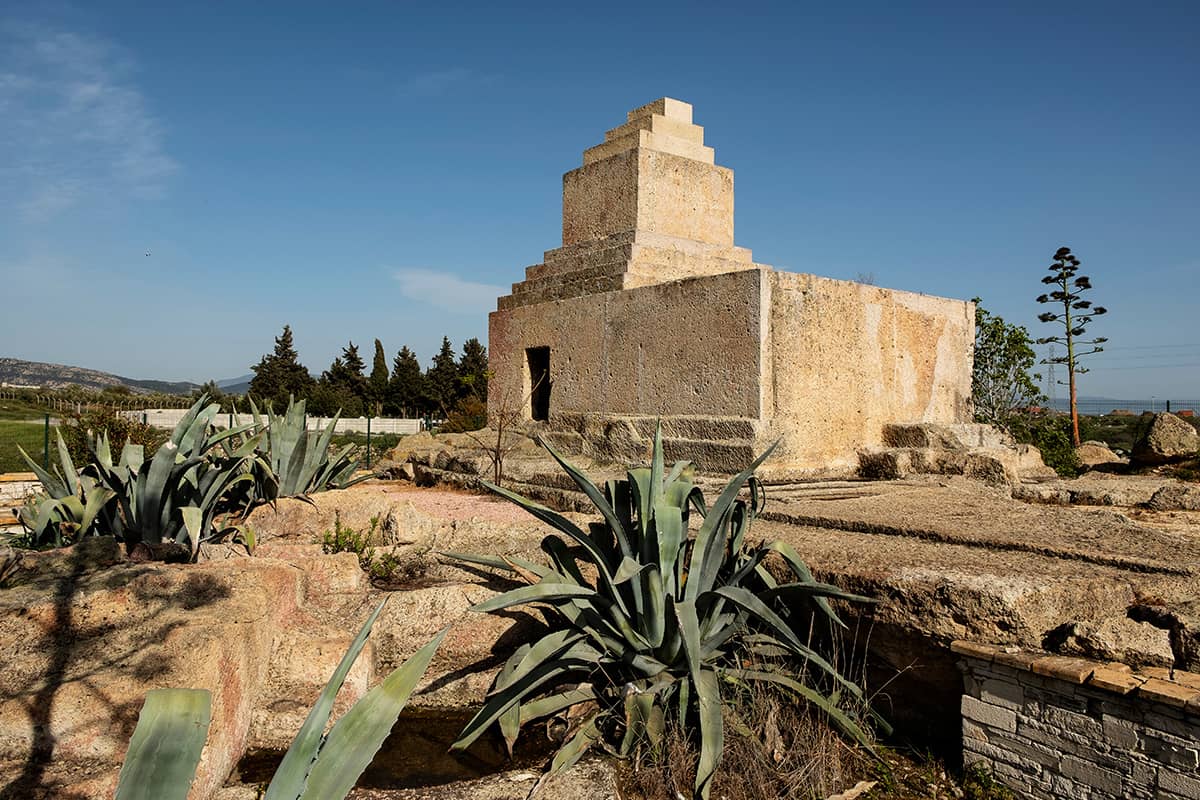 As to for whom it was built, according to Xenephon of Athens, Cyrus the Great commissioned the mausoleum to commemorate the Susa King Abradatas and his wife Panthea, who committed suicide after her husband’s death. It is thought that the structure served as a prototype for later buildings in Persia. 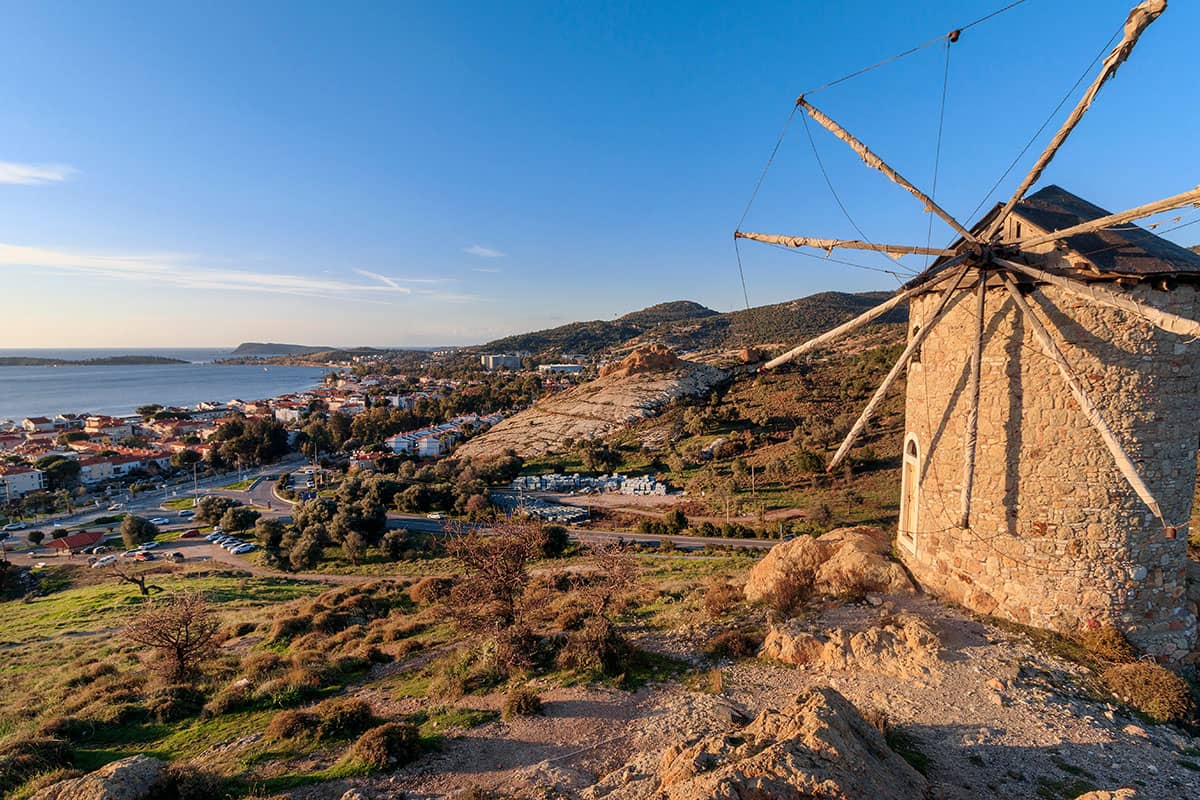 When you part with the mausoleum, right at the end of Foça-İzmir road, at the entrance of the town you are greeted once again by three different sites banked up in the same area: Phokaia’s ancient theatre, Great Mother Kybele’s holy site, and the Ottoman mills.

On the hill where the three mills are located, there are more than a hundred niches hollowed as altars to make offerings to Kybele, the Great Anatolian Earth Mother. On the foot of the hill, you can also see the excavated theatre. 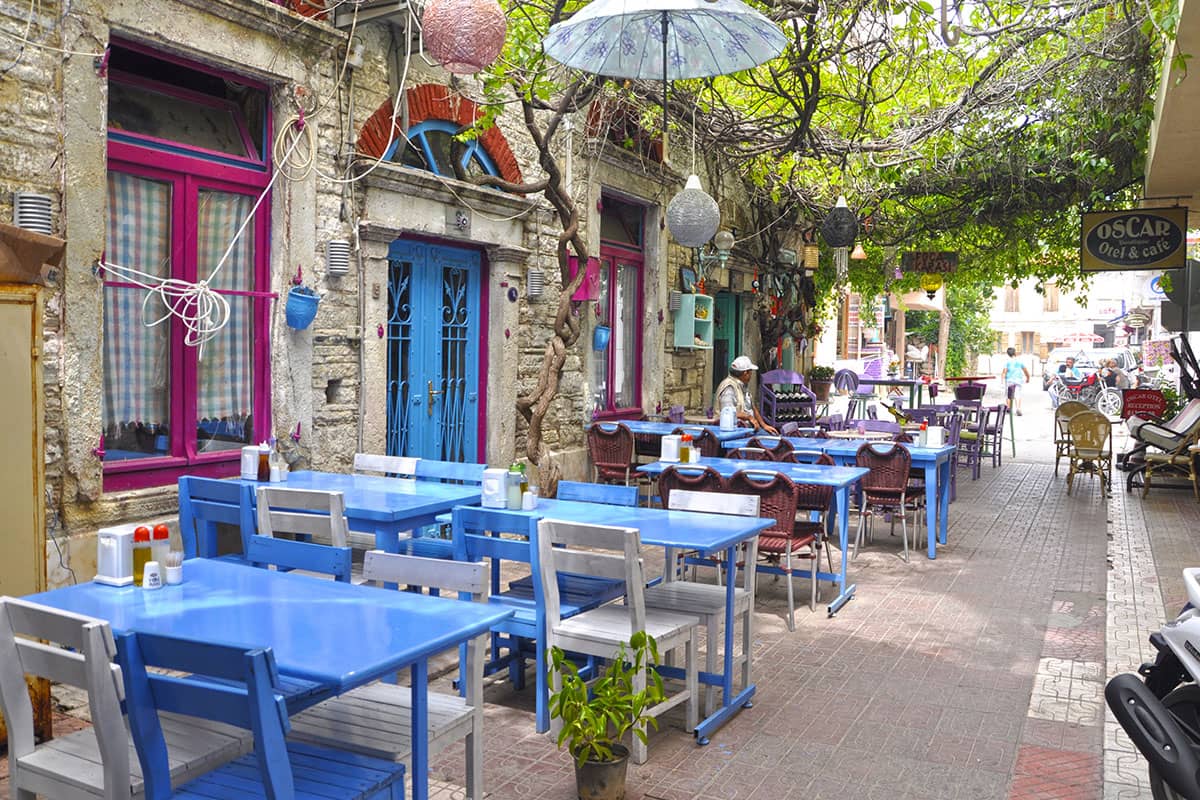 And here you are at the center of Foça! The town has beautiful stone houses, some of which were converted to provide accommodation services. When you go farther into the coastal part of the town, the fresh starters and appetisers of the TurkAegean welcome you with all their hospitality in Foça! The oil obtained from the most beautiful olives meets appetisers and invite diners to a feast of taste. Traditional appetisers made from blessed thistle, common mallow, radicchio, asparagus, and many other not only delicious but also very healthy endemic herbs are undoubtedly the flavours that should be included on your seafood dining tables. 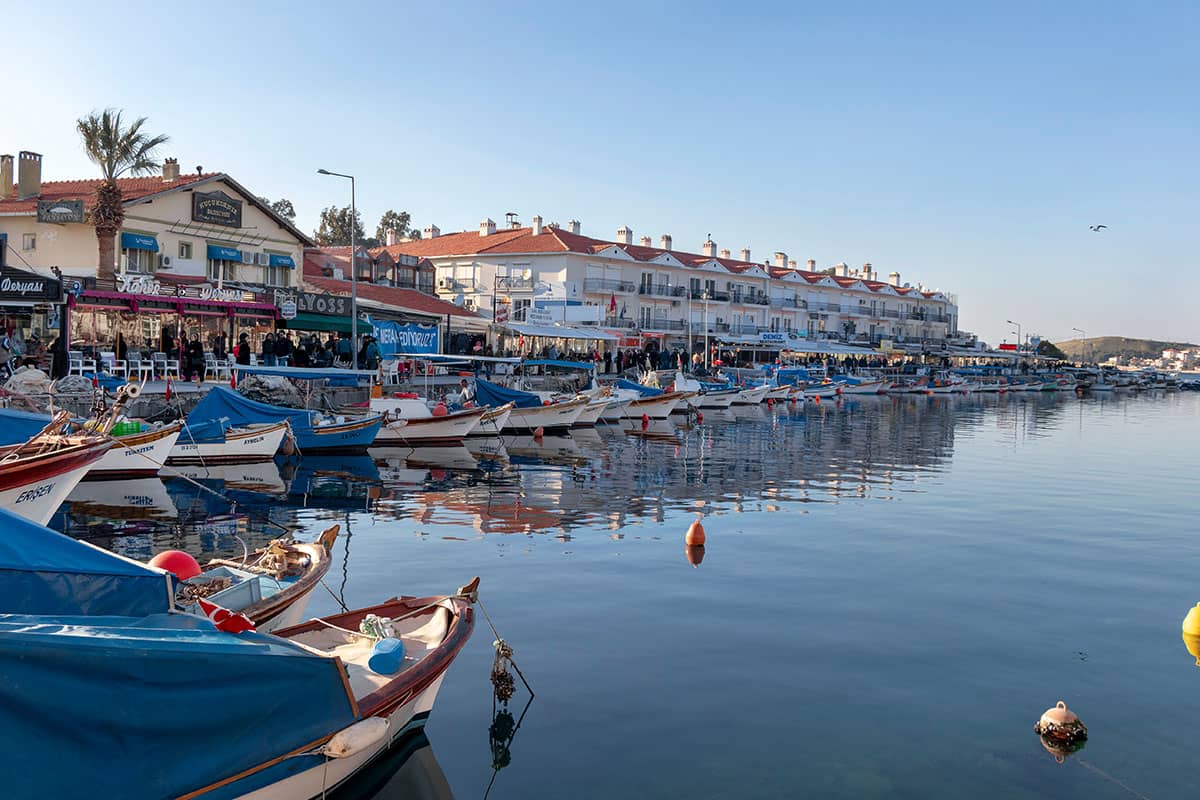 Every restaurant you come across when you walk along the beach in Foça is eager to offer its visitors this unique gastronomic experience. Famous Turkish rakı and wine varieties made from the local grapes of the TurkAegean are indispensable for these tables. You will spend one of your most enjoyable times chatting with your friends while having your meal in the streets of Foça, which are brightly illuminated after sunset. 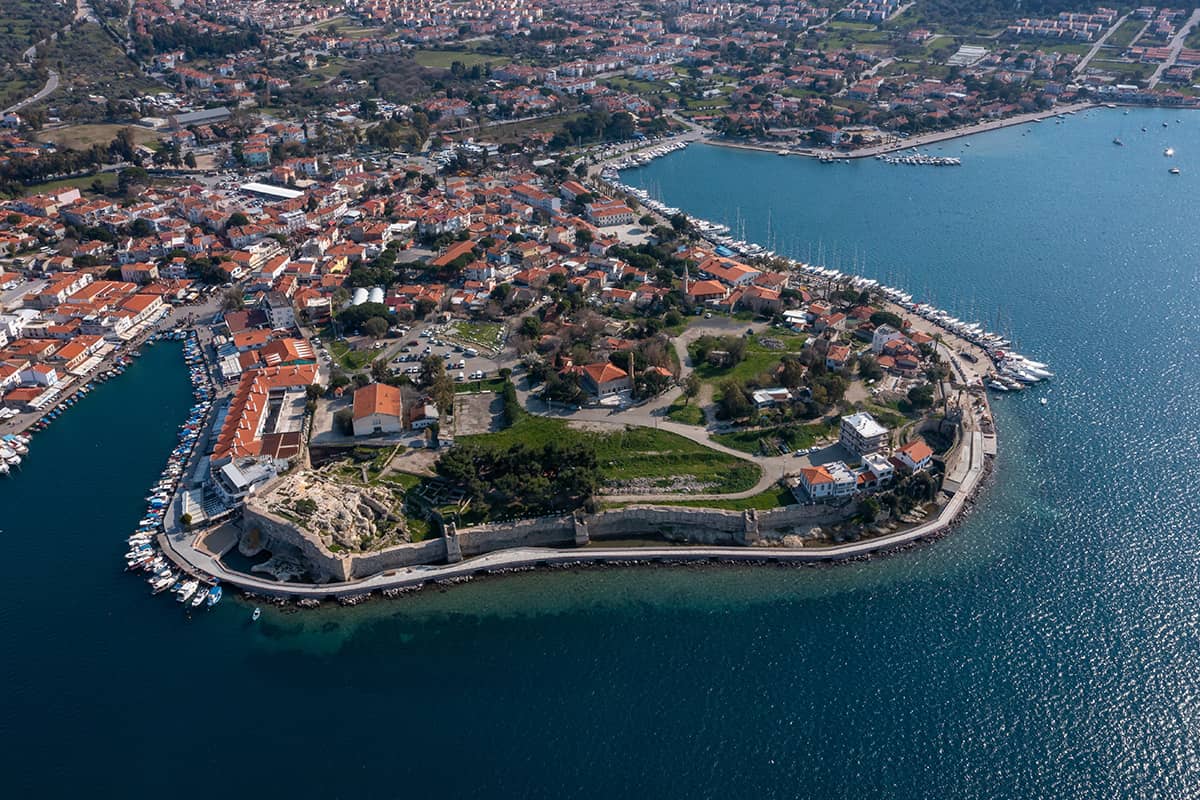 Ancient Phokaia is situated on a peninsula located between the Foça Harbour to the south and Foça Beach to the north. On this part of the town are found perhaps the most important sites in Foça: Kybele Open Air Temple, Beşkapılar Castle, and Fatih Mosque. 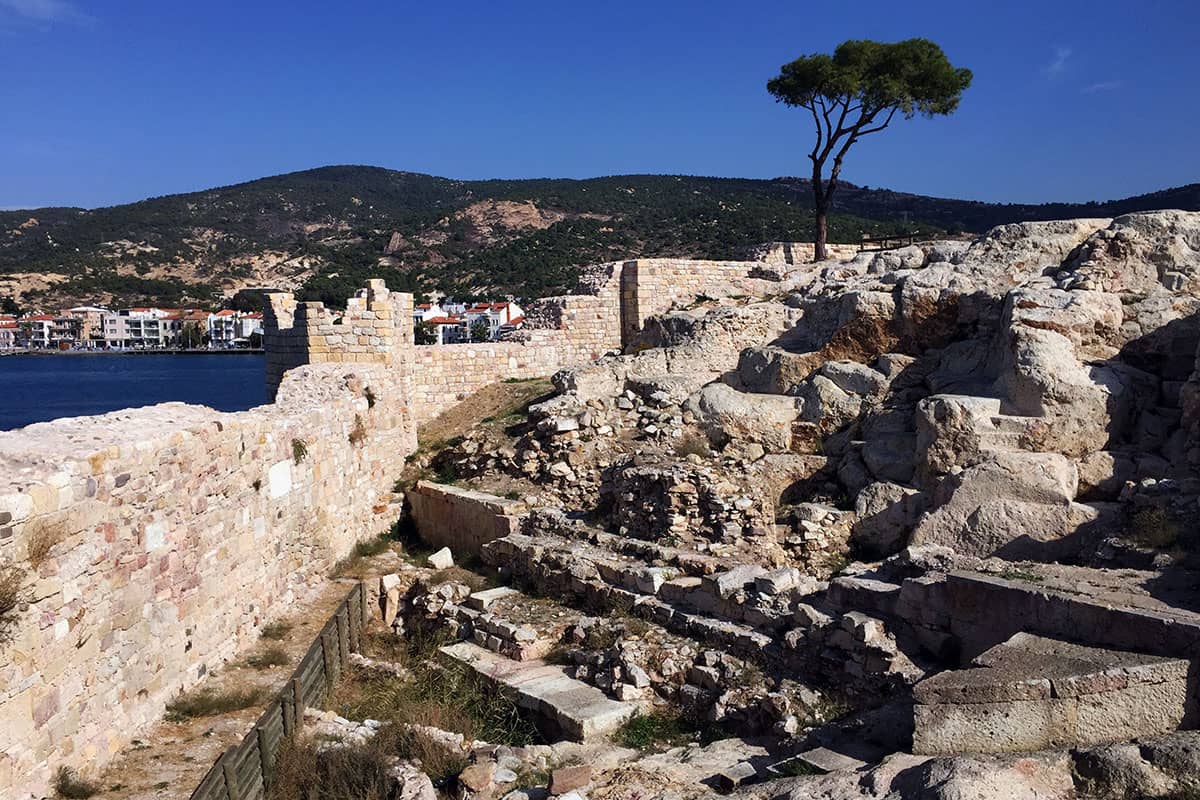 The Kybele temple is dated to around 580 BCE. The rocky coast is where niches are located for offerings to be made for the goddesses. On top of the rocks is built a four-layered city wall. The earliest masonry is the Archaic unmortated wall, then it is fitted with Roman walls with lime mortar, and later in the Genoese and Ottoman periods Brickdust (Khorasan) mortar is used to fortify the city walls.

On the flat rooftop of the structure is the Ionian temple of Athena, Zeus’ daughter from his first wife Metis, whom he feared for she would bear children more powerful than him, wherefore in terror, Zeus swallowed his wife, but the child was born, ploughing through her father’s head. Like Kybele, Athena is very important in the cultural development of the town. Here, seeing both temples for these two goddesses, one built on the other, gives us wonderful insights into earlier civilizations’ matriarchal societies. On the temple floor, it is still visible for you to see the watercourses that carried the blood of the offerings to the Goddess Athena. 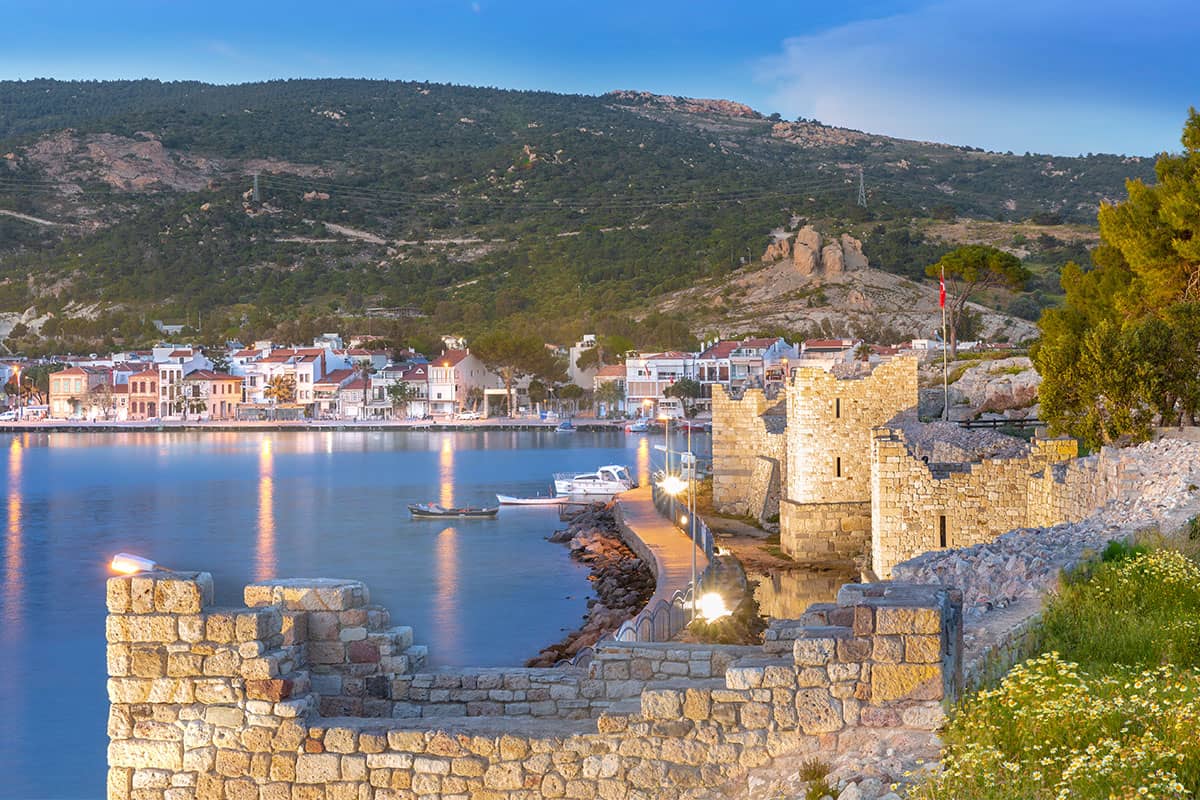 Right on the peninsula point, you can come to the Beşkapılar Castle, the ancient entrance of the town. The castle has been renovated several times under Eastern Roman, Genoese, and Ottoman periods both to further fortify the castle structure and to carry out restorations. 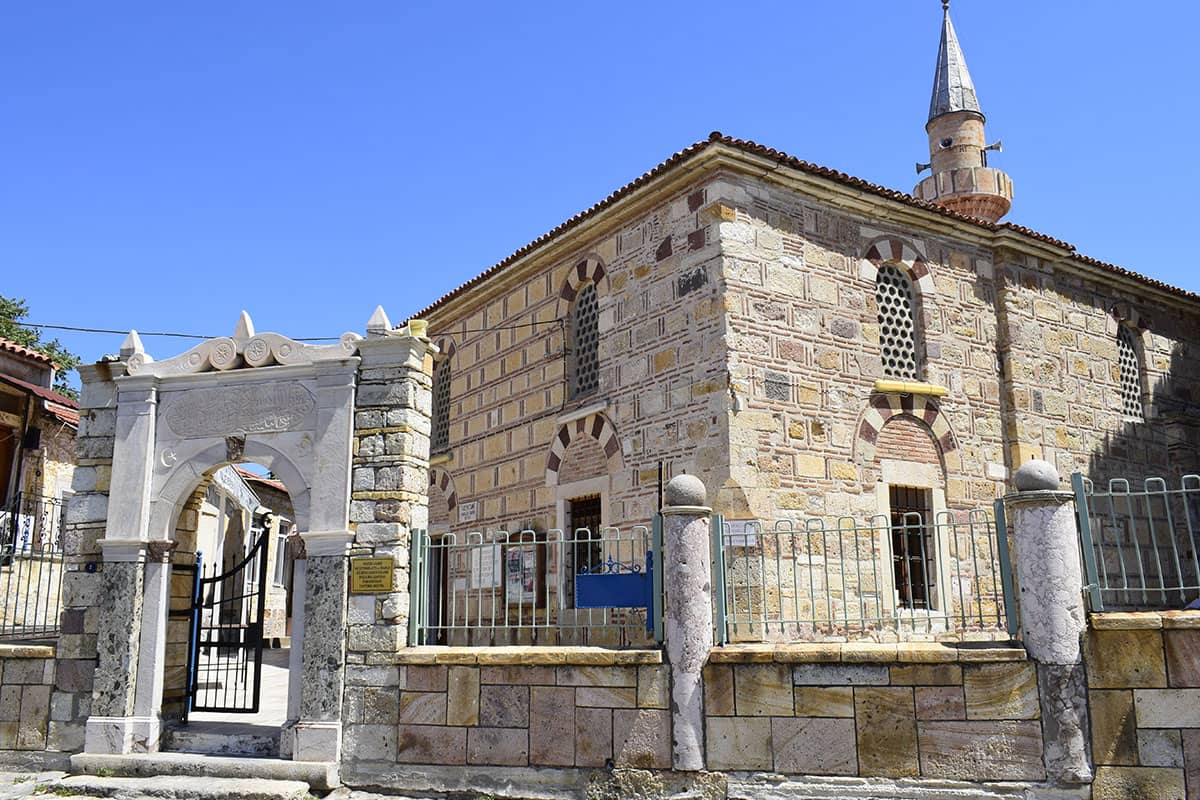 The earliest Ottoman structure in the area is the Fatih Mosque, built in 1531, and renovated by Suleiman the Magnificent. Moreover, the mosque is still in use today. 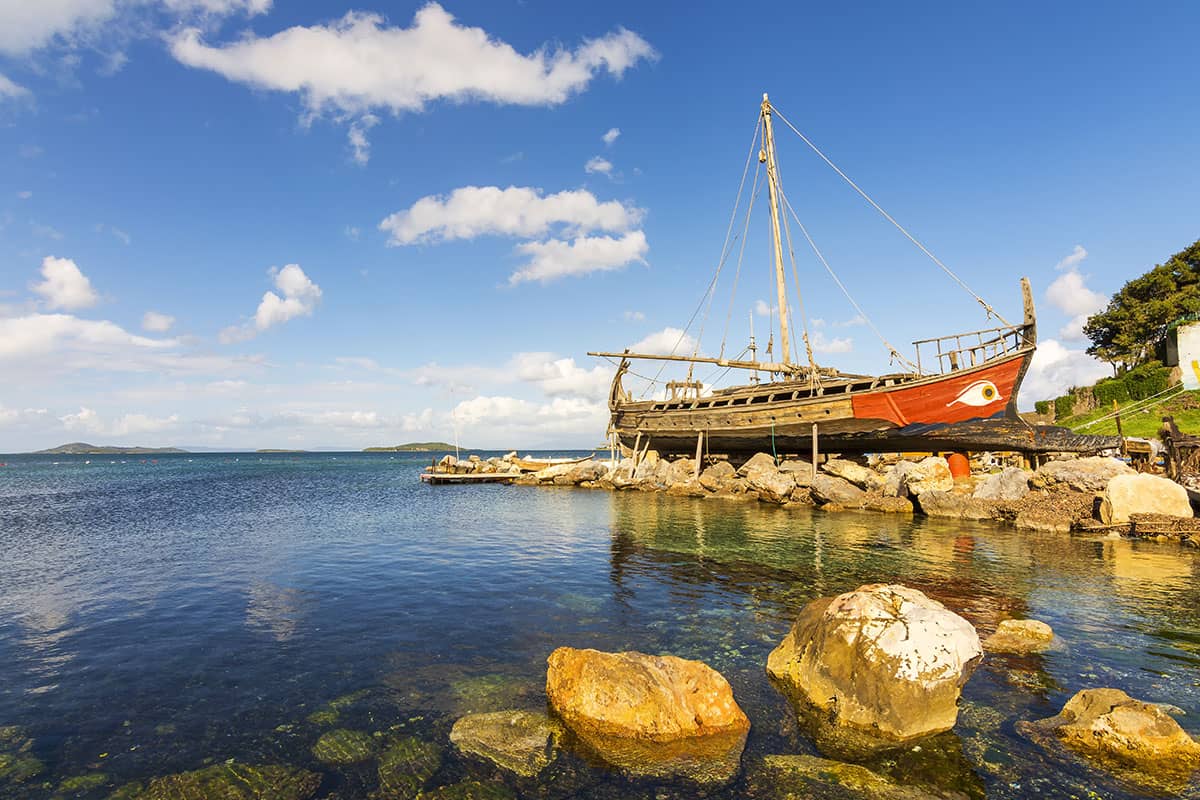 Phokaians are known to be one of the earliest colonists, having set up colonies all around the Mediterranean as far as northern Spain. In commemoration to their seafarer society, an initiative built the ship “Kybele'', a true replica from the original which travelled from Foça to Marseilles which was another Phokaian colony, in 62 days. A statue of the ship can also be seen on the south-western coast of the peninsula. 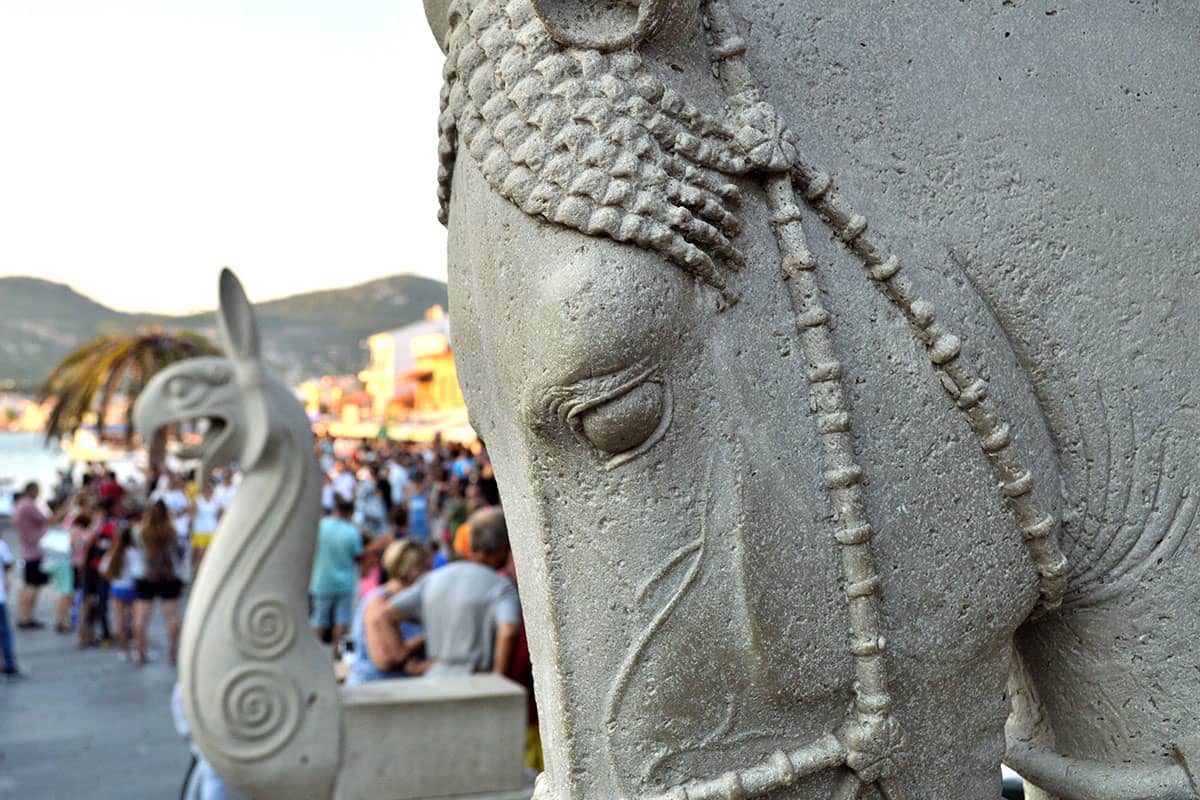 In truth, you can see many statues when you wander on the coast of Foça from horse and griffon busts to columns, which are true copies of Ionian structures excavated from various sites in the town. 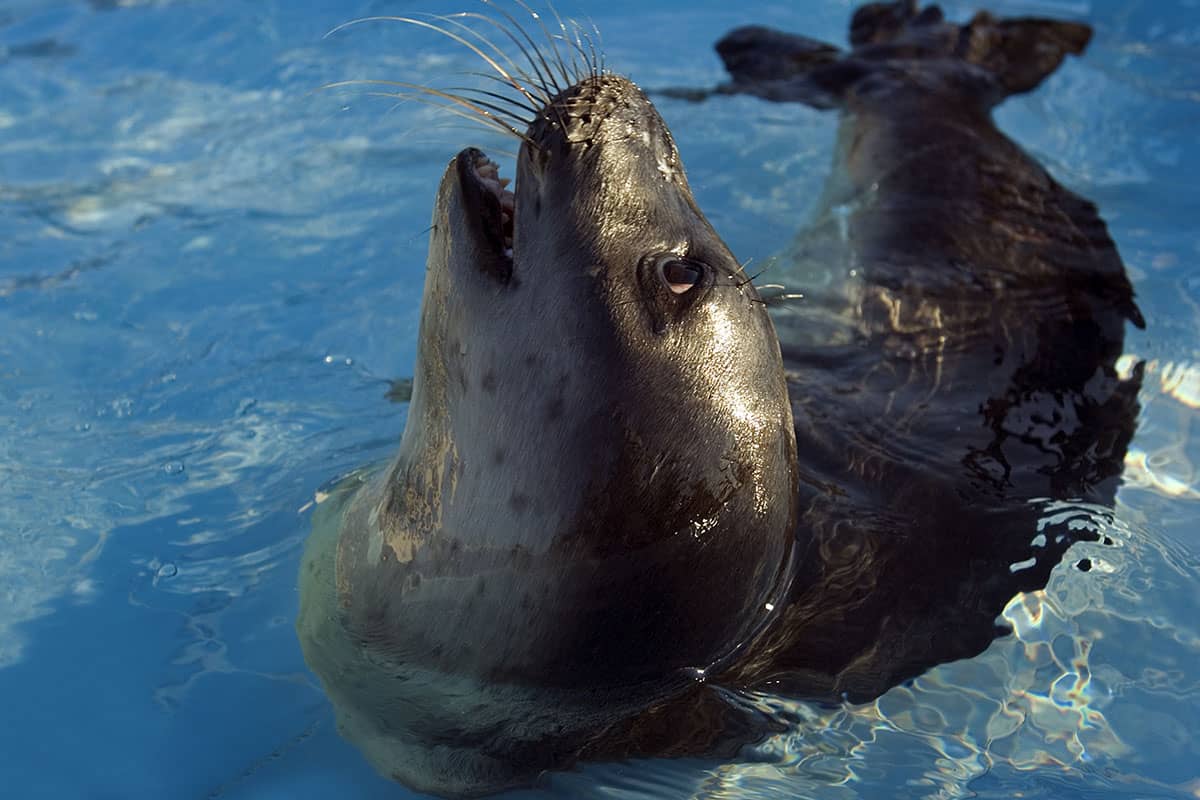 One last thing: we haven’t told you how the name Phokaia was derived. Like many names, Phokaia’s etymology is somewhat obscure but we will go with the local favourite. According to this version, Phokaia comes from the Mediterranean seals (Phocidae), the term “fok” is also in use in Turkish for seals as well, as they have been the true inhabitants of the TurkAegean for centuries. 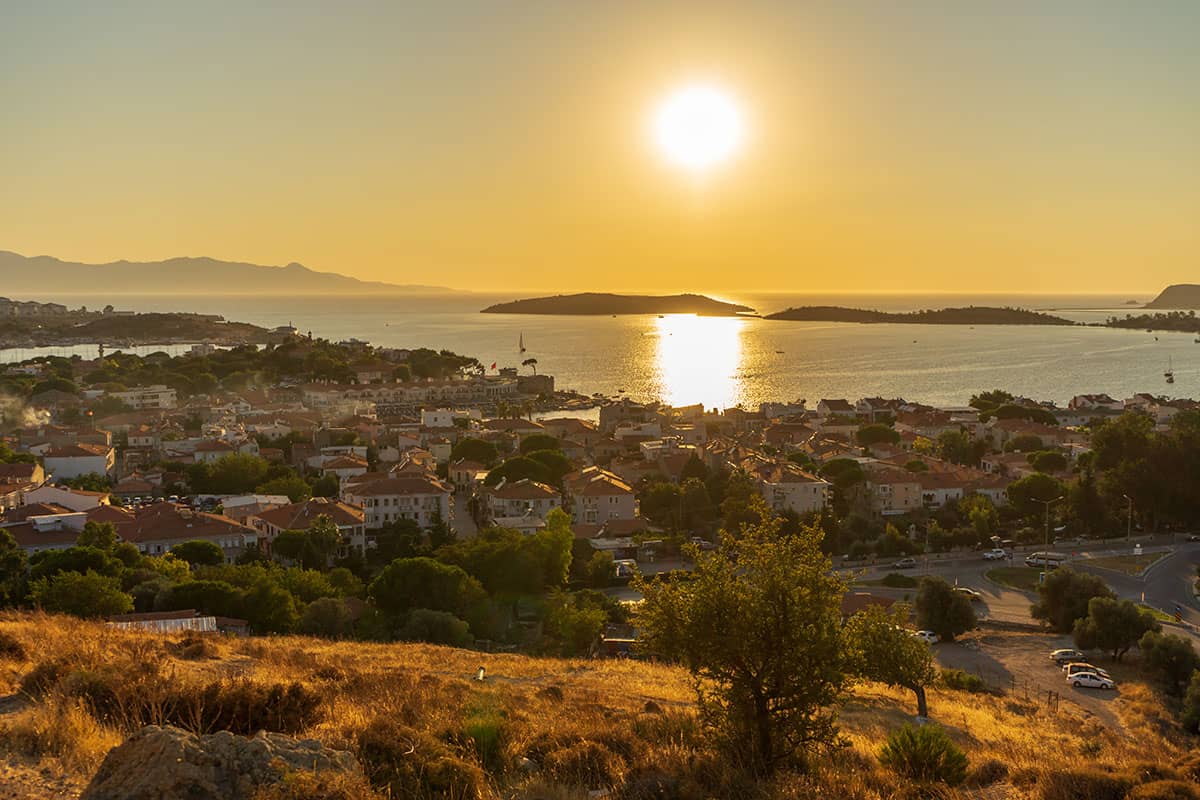 Foça is full of historical, cultural, and natural sights and it houses more than which can be described in writing. For this reason, it is where you can fully appreciate a complete holiday. In short, the site is ready to welcome you, don’t keep it waiting!