Situated northwest of ancient Asia Minor, the ancient site of Mysia used to cover parts of the Turkish city of Bursa. Our span of knowledge on the history and traditions of the Mysians is quite limited, but we have enough documented history to know that they were competent in land transportation. Records reveal that the Mysians traveled across the meandering routes and lower mountain slopes of today’s Bursa – this formed the inspiration behind the present-day Mysia route! 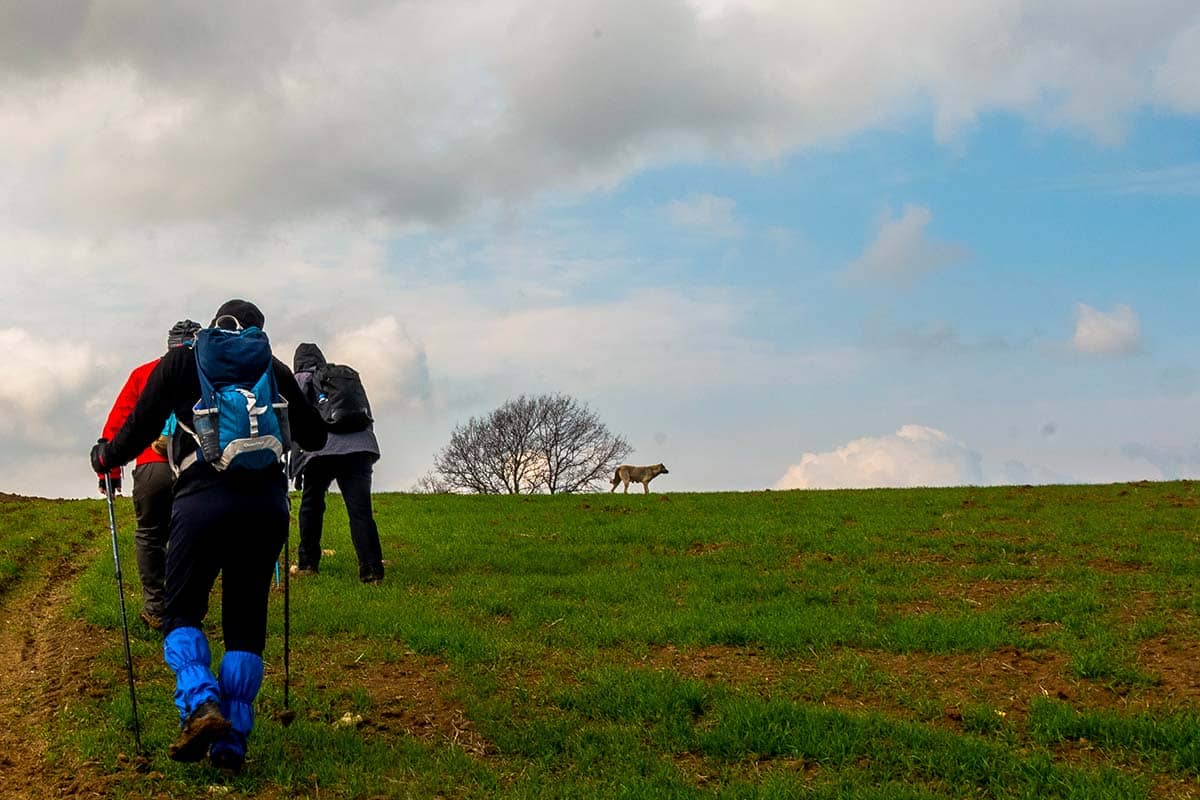 Having recently become part of a project called Mysia Yolları, or Mysia Ways in English, that has tranformed it into a modern trail, the Mysia route’s main track extends from the village of Misi in the south all the way to Gölyazı, a peninsula prying on Bursa’s Uluabat Gölü or Lake Uluabat, and to the Marmara Sea in the north. Let’s start by taking a look at the route’s main attractions and continue with the opportunities it offers for outdoor activities and nature sports.

The route that starts in Bursa’s Misi village passes through Nilüfer district’s mountainous roads and ends in Orhaneli, where each village has a unique Ottoman tale to tell. The historical routes that extend westbound take visitors to Lake Uluabat and the villages perched on the lake’s shores provide all the excitement of a cultural trip to visitors.The two separate paths that start in Tahtalı or Ürünlü take cyclists and hikers alike to Kapanca, an ancient port that has lost nothing of its former ancient glamour, on the Marmara Sea’s southern coast. All routes come with color-coded signs and newly paved paths, . Mounted on a bike, you’ll be passing through towns of historical importance and have the chance to see Aktopraklık Mound, an eyewitness to over 8,000 years of history. 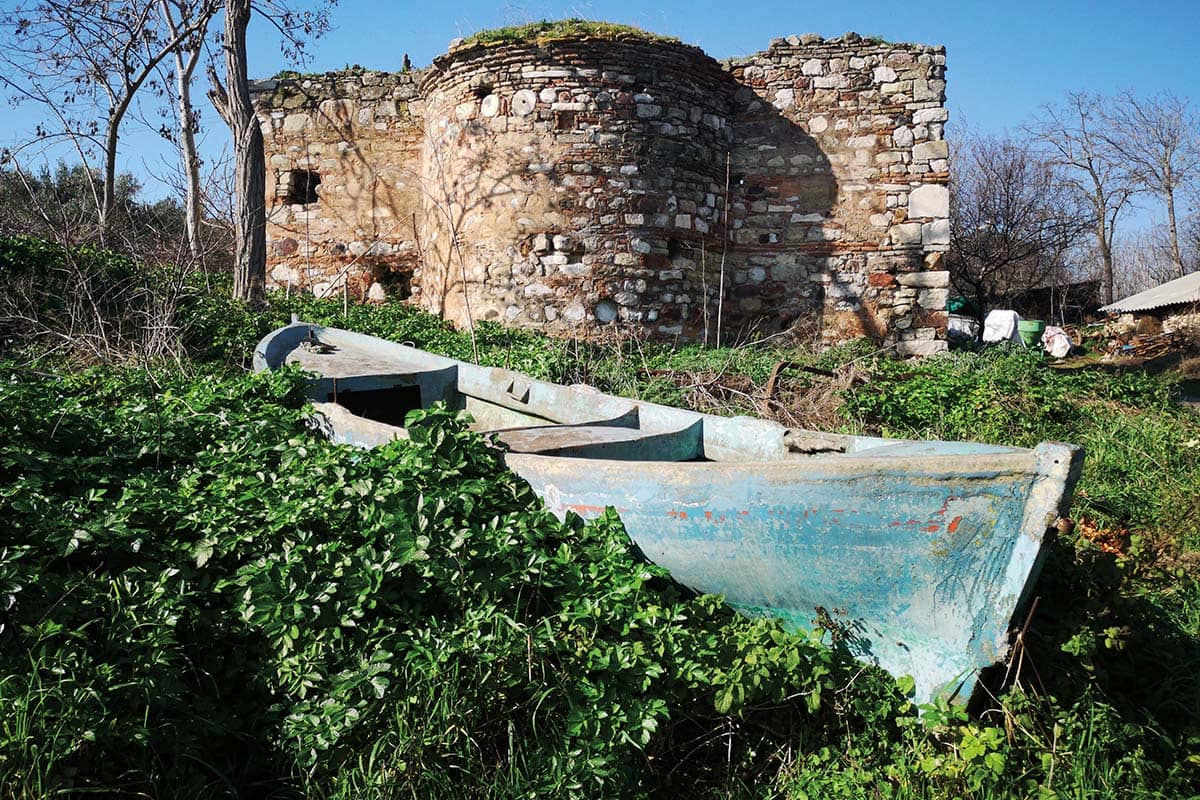 The route’s first stop is the historical village of Misi, which gets its name from the Mysians themselves. Local attractions include the Mysia Photography Museum and Nilüfer Literature Museum. The Mysia Photography Museum is a unique contemporary museum that preserves and documents visual memory via works of photography reflecting the history, nature, culture of Bursa and the district of Nilüfer.  The Nilüfer Literature Museum exhibit items and works that used to belong to prominent authors and poets of Turkish literature. There are a total of 850 manuscripts in the museum’s collection, some of which are displayed virtually. 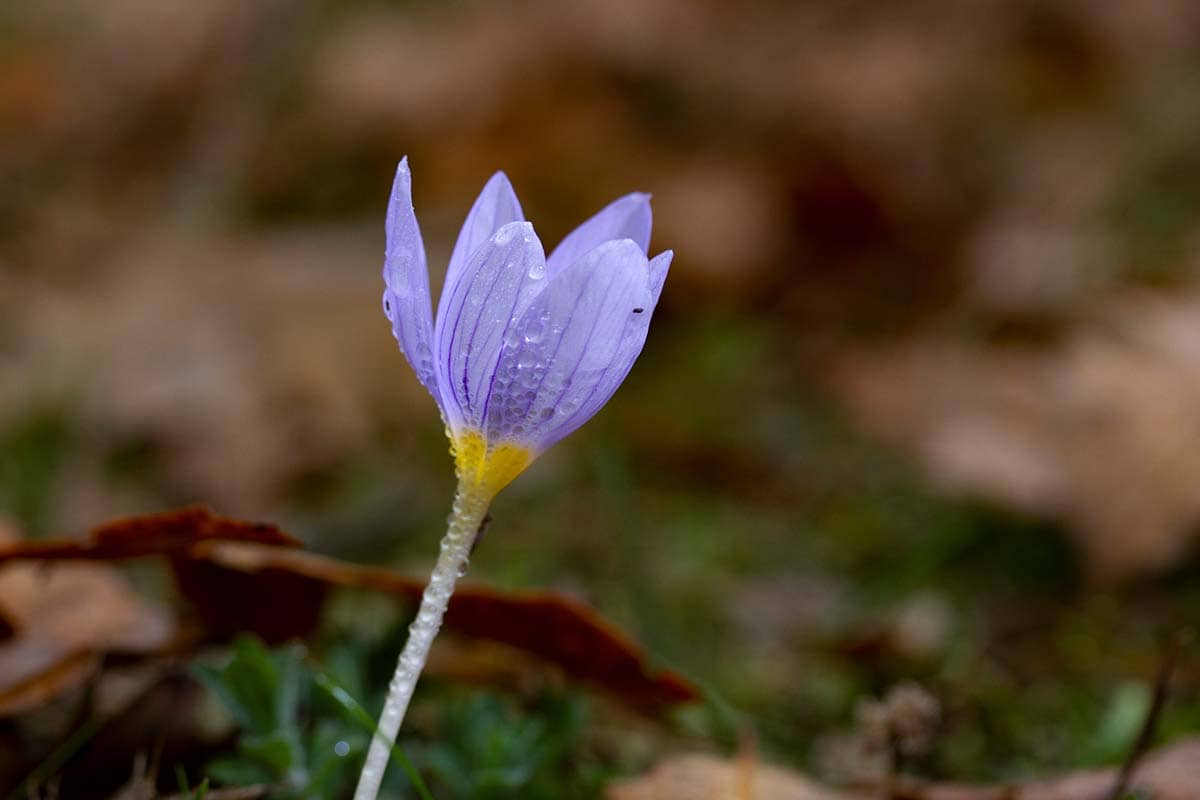 Next on the route is Gölyazı, a peninsula on Bursa’s Lake Uluabat. Among the main attractions here are the ruins of the ancient city of Apollonia,  Gölyazı Kültür Evi (lit. Gölyazı Culture House and formerly the Church of St. Panteleimon), (formerly the Church of St. Panteleimon), and an urban layout featuring old Ottoman houses. Believed to have been constructed in the early 20th century, the church is a valuable example of Greek Orthodox religious architecture with its simple Neoclassical elements and irregular use of stone and brick. The structure was restored in 2014, and now serves as a space for cultural events.

The Byzantine ruins of Apollonia, which also fall within the boundaries of Gölyazı district, reflect the traces of the earlier cult of Apollo. In the antiquity, this site was referred to as “Apollonia ad Rhyndacum” so as not to be mistaken for the other ancient cities named after the god of oracles. Historical records tells us that there were a total of nine cities named Apollonia, meaning the house of Apollo, in the lands we now call Anatolia. Traces of Apollonia ad Rhyndacum are found in the historical fortification walls of the peninsula which feature several inscriptions and carved motifs. Lake Uluabat, which entered the international network of Living Lakes in 1998, is another local attraction. It is believed to have once served as a commercial hub with its heyday believed to have been around the 9th century CE. Another Mysian stop is Ürünlü or Kite as the village was known in the Byzantine era. Once a Roman port, today visitors can see the ruins of a Roman castle here.

Another destination that shouldn’t be missed is the village of Güngör. Here is a village which observes the principles of slow life and slow food. The friendly faces of locals ploughing their fields will greet you and fishermen will treat you like they have known you their entire lives.

You may also want to stop by the villages of Dağyenice and Maksempınarı to enjoy local specialities with a  traditional Turkish breakfast spread taking prime place! 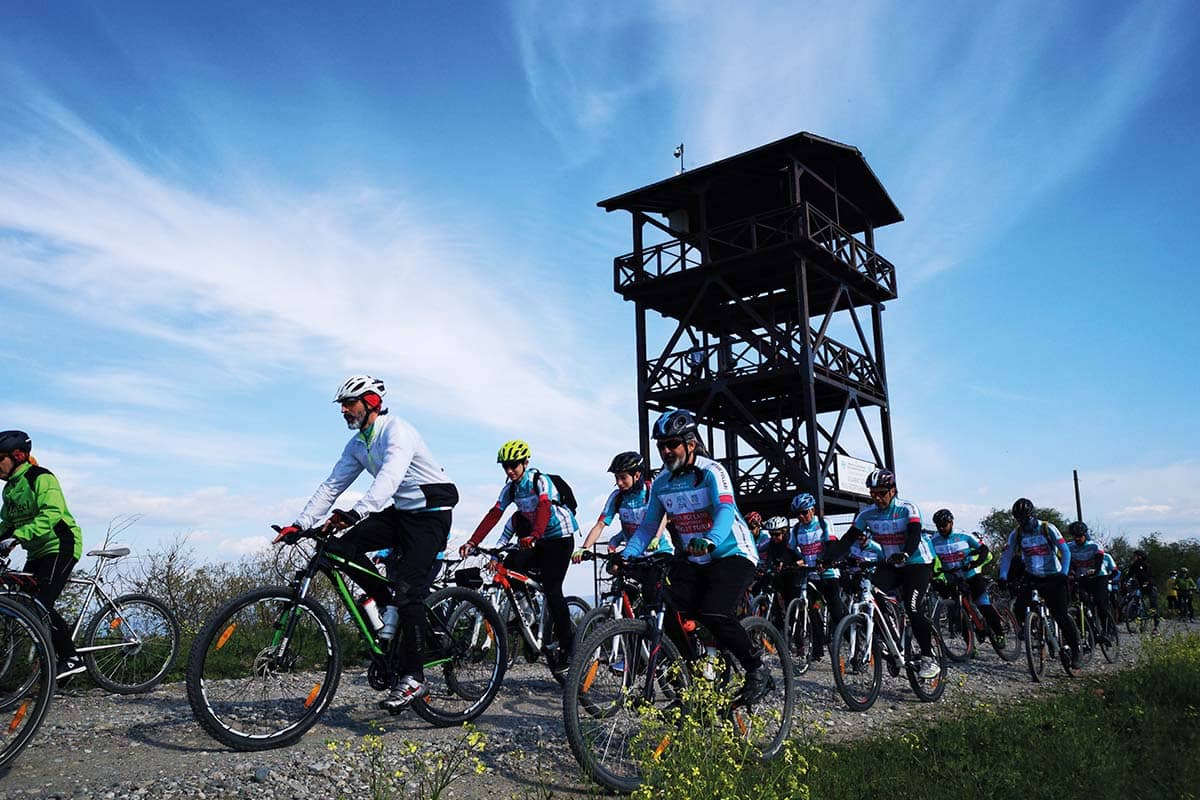 What makes the Mysia Ways special is not only the historically and naturally beautiful landscape but also its suitability for several outdoor activities and nature sports. The roads that fall within the borders of this route have been specially redesigned within the scope of the project and are now fully suitable for activities like hiking, trekking, and cycling. They also feature several types of campgrounds with the west shore of Lake Uluabat being the most popular. The mountainous areas of Nilüfer district are a little more chilly, whereas the Uluabat area comes with forested villages. 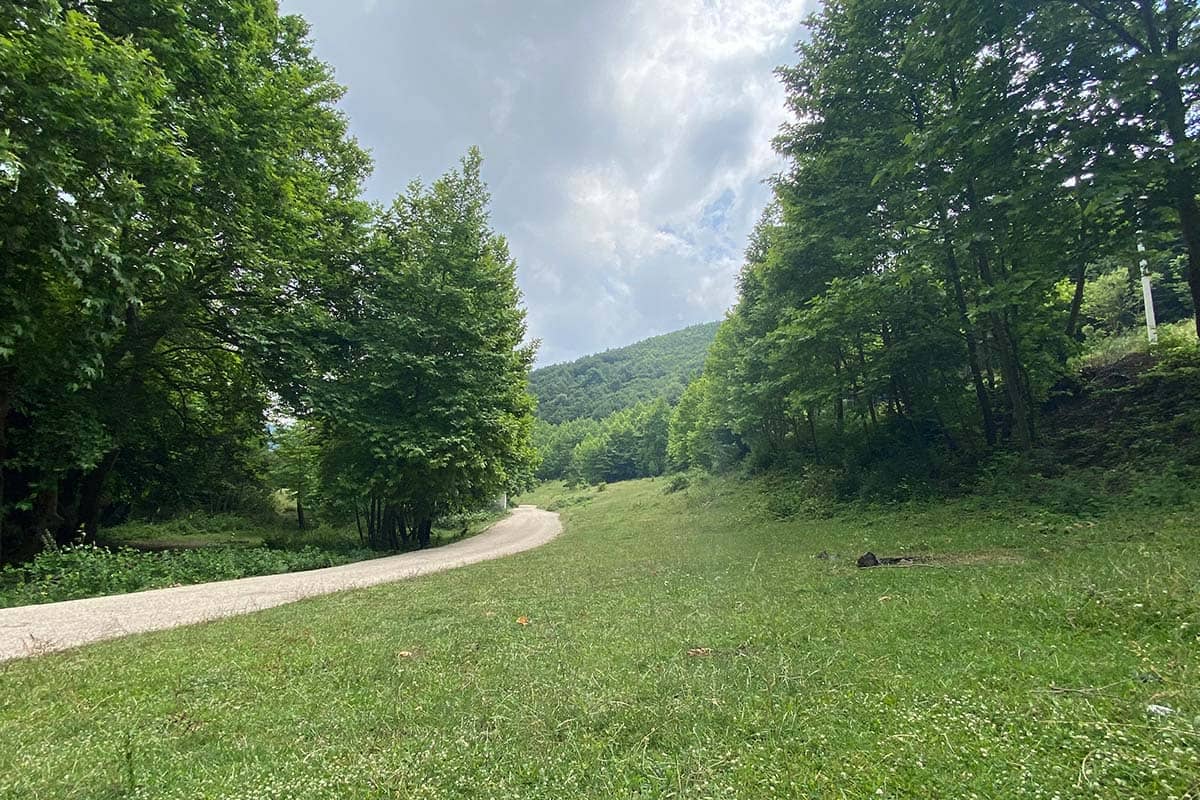 When it comes to cycling, trekking, and hiking, the Mysia project has seen the development of an 850-kilometer-long trail with 50 stages - one to befit every expectation and level of difficulty. Specifically, there is a trail called Trans Mysia which extends for 58 kilometers and has 6 stages; a trekking route of 301 kilometers and 21 stages; a cycling route of 518 kilometers and 18 stages; and a horseback riding route that consists of 5 stages and spans 38 kilometers. When these redeveloped routes reach the natural beauties of Bursa, activities like birdwatching, caving, and paragliding were also be made available.

With the guidebooks, pocket maps, and information boards that have been prepared within the scope of the project, traveling along this route, either on foot or by bike, is easier and more entertaining than ever. The project aims to develop an alternative to traditional models of economic development. This new model is fully based on natural and cultural tourism, and is part of a larger project developed by the United Nations and Türkiye that focuses on innovative approaches and applications for sustainable rural development.