Let Us Tell You What A Turkish Wedding Is Like!

Weddings are an essential part of every culture, and feature differences small and large in just about every country in the world. Türkiye is such a melting pot of cultures, civilizations and histories that it’s no surprise that its weddings have turned into something completely unique to Türkiye alone.

One VERY important point about Turkish weddings, however: they are incredibly inclusive! If you stumble upon a Turkish wedding, feel free to congratulate the lucky bride and groom and it’s very possible you’ll be invited to the wedding! Weddings often feature thousands of people, where entire villages attend and the attitude is “the more the merrier” as opposed to the more intimate setting of weddings common in other countries.

So follow along before you get the chance to attend a Turkish wedding of your own – or take it as inspiration for the destination wedding of a lifetime! 😉 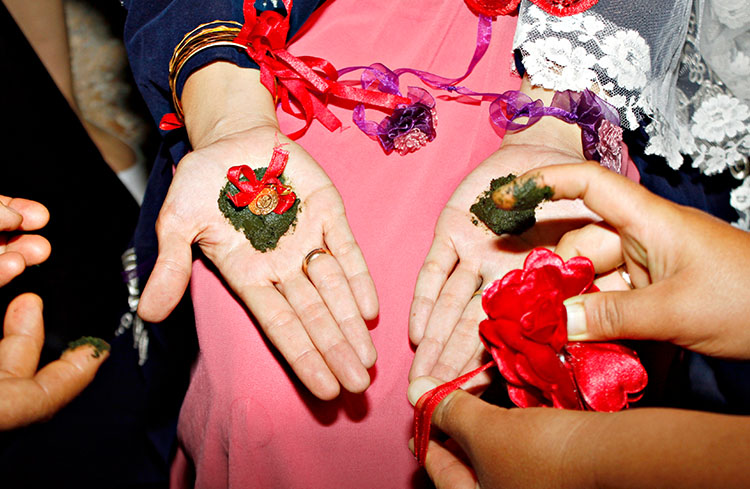 Henna night (or kına gecesi in Turkish) does, in fact, serve a similar purpose as a "hen night," in that it's about saying farewell to bachelorhood and embracing marriage.

Naturally, despite its similarity, the name has no relationship with hen parties, but comes from the tradition of burning henna, which is believed to protect married couples from evil, as well as further their devotion to each other. Both the bride and wedding guests will have henna burned onto their hands in elaborate designs. The ceremony is still primarily female, with perhaps an appearance from the groom and friends (specific traditions vary), but mostly it's a celebration for the bride and her friends.

Another unusual feature of the Henna night is that, while it is a joyous occasion, it’s tinged with a touch of sorrow, and often features the bride crying as she realizes that she’s leaving one lifestyle and entering another.

Playing the pipe and drums 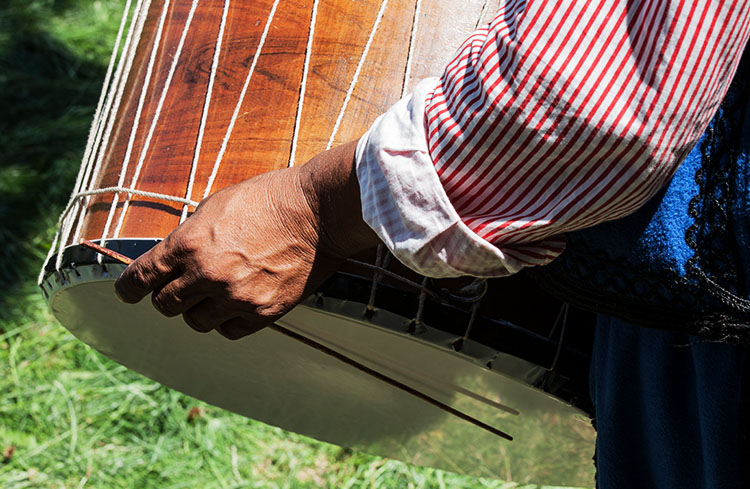 The classic wedding instruments, particularly in the leadup to the occasion, are traditional Turkish drums called davuls and pipes called zurna. Today these are still formed as part of tradition, though as you'd expect the primary wedding music tends to be more modern in form.

Celebration as the bride is whisked away

The groom usually appears at the bride's home to take her away as family and friends "give her away." He usually comes in a car that's all done up with sashes and flowers. Often times, the groom has to knock many many times as the bride's family "refuses to open the door to him" as a joke. In some traditions, the groom has to "bribe" the children holding the door closed with loose change or candy. :) 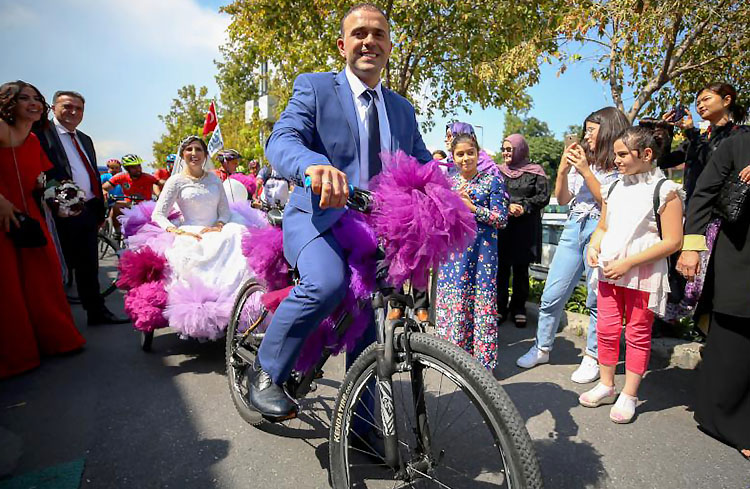 This tradition dates back to the era when horses were used rather than cars. Now, a convoy of cars follows the bridal car and they drive all over the village/town/city in a row. Often the car stops and the "davul" and "zurna" play. People often honk horns as part of the convoy too. When the car stops, children will pour into the streets and ask the bridge and groom for pocket money, and the bride and groom typically have placed small sums of money into envelopes to hand out to children. 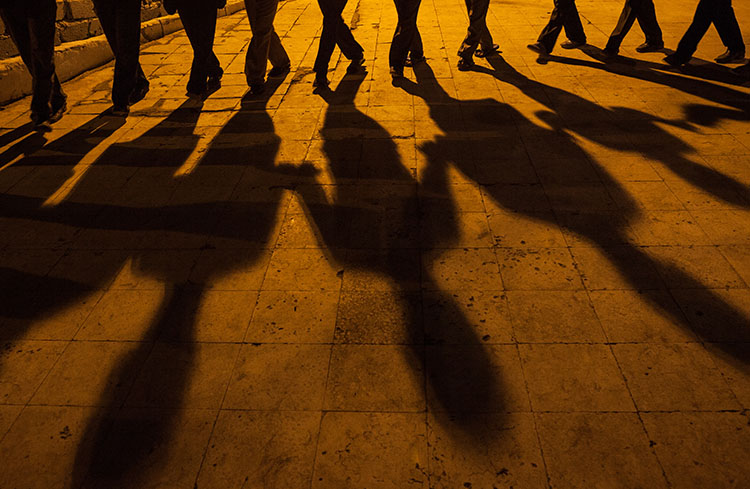 Halay is the most common form of folk dance for weddings, against traditionally played with the zurna and the davul. It is a cycle of the same melody that begins slow and speeds up, with people dancing together holding each others hands or fingers and dancing together.

Different regions have different traditions with the halay dances, though it's rare you'll find a single wedding in Türkiye without it being played and danced to! 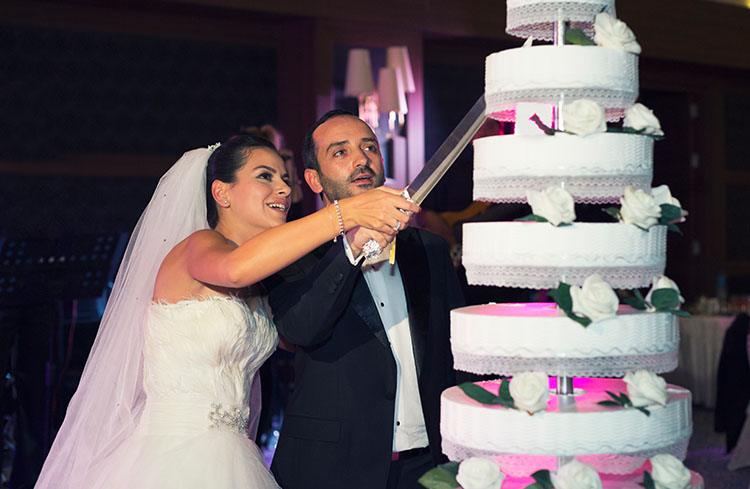 The ceremony itself is amazingly simple. The bride and groom choose a witness apiece, and then an officially sanctioned employee of the municipality or local authority (nikah memuru) pronounces you married. This employee is neither a religious authority or a legal expert, but instead is simply a representative of the local government and recognizes your marriage. The whole process takes around 15 minutes from start to finish. Once witnesses and the bride and groom have signed the official marriage document, it’s given to the happy couple and the ceremony is over – time to celebrate!

Pinning gifts on the bride and groom 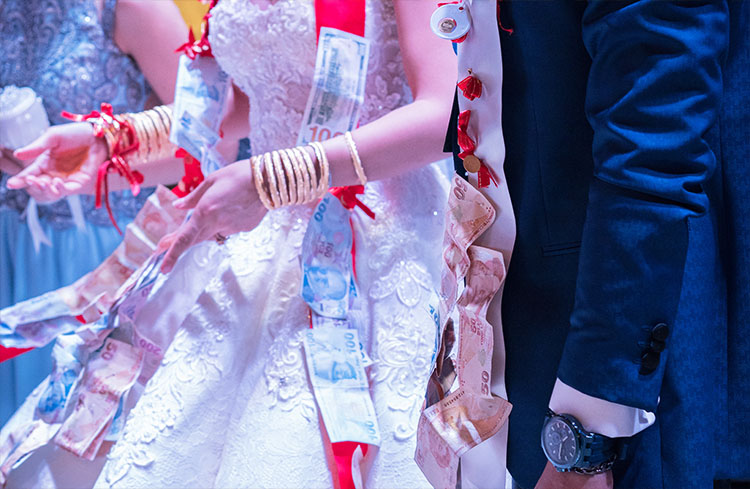 Gold and money are the main wedding gifts in Türkiye, and there's typically even a ceremony after the official marriage is complete. The bride and groom don sashes and guests come up one by one to take pictures with them and pin gold or money onto the sashes. The money is then supposed to be used to help the couple get started in life, whether to buy a house or anything else they need to begin their new lives together. 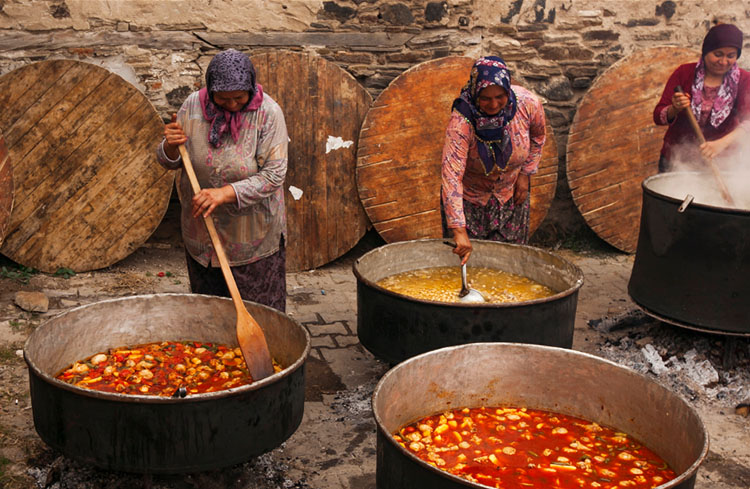 Weddings are typically followed by a grand feast for all the guests and of course dancing and celebrating, often long into the night! While the music is more likely to be Turkish, in general this is probably similar to the rest of the world, and the “top of the pops” music that plays all over the world is just as likely to be heard at a Turkish wedding celebration as anywhere else.