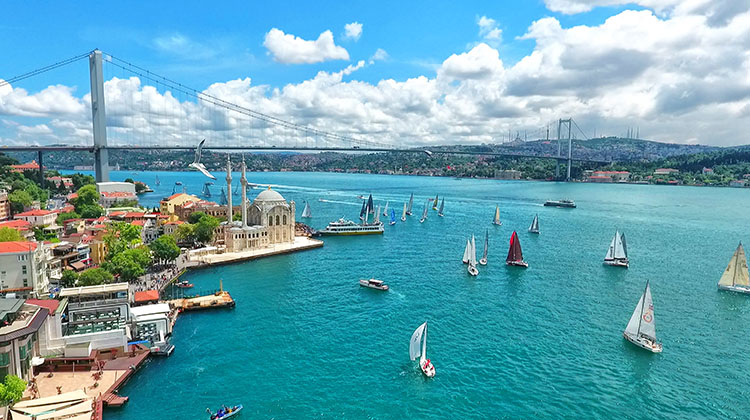 Situated at the confluence of continents, civilizations, and cultures, İstanbul is one of the most beautiful and vibrant cities of the world with almost each neighborhood featuring traces of various periods of history. The unrivaled İstanbul hosts its visitors on streets that bore witness to many important periods of history while offering the profile of a colorful, cosmopolitan city. Spring is the time to get to know, understand, explore İstanbul, and enjoy the sun at the restaurants or outdoor areas of cafés along the Bosphorus coastline. İstanbul welcomes the spring in style with Judas trees that bloom along the Bosphorus coastline, tulips that surround the entire city and create mesmerizing views in Emirgan Forest and Göztepe Park, which host the Tulip Festival. 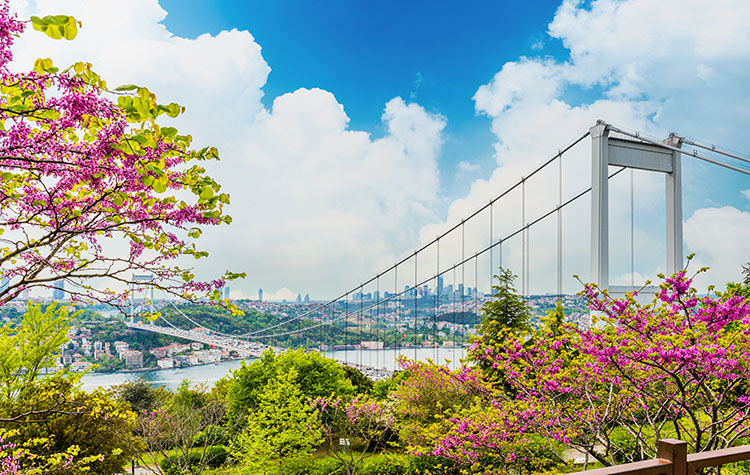 İstanbul hosts its guests with its world heritage sites, gastronomy that ranges from the Ottoman cuisine to the fish menus of the Bosphorus, contemporary art events and a shopping experience that merges the past with the present. The city offers many sites to see, many events to attend, and many flavors to taste throughout the year. Here are a few suggestions for those who don’t know where to start exploring this ancient city.

İstanbul: A City of Culture and History

Commissioned by Mehmet I (the Conqueror) in 1478, the Topkapı Palace is one of the most important works of the Ottoman architecture and served as the seat of government where the Ottoman sultans ruled the country for four centuries. Situated in the Sarayburnu (Seraglio Point) neighborhood of the city, Topkapı Palace is home to the personal effects of the sultans and the dazzling royal jewels, and the Spoonmaker’s Diamond in particular. On exhibit at the Chamber of Sacred Relics are important relics including the mantle, beard hair, and footprints of the Prophet Mohammed, Abraham’s pot, Moses’ staff, David's sword, and Joseph's turban. Another important stop in historic İstanbul is the Hagia Sophia. Commissioned by the Emperor Justinian, Hagia Sophia entered into service on 27 December 537 and was converted into a mosque following the city's conquest by Mehmet I. Today, open to the general public as a museum, Hagia Sophia is a breathtaking structure with its spectacular and captivating architecture. 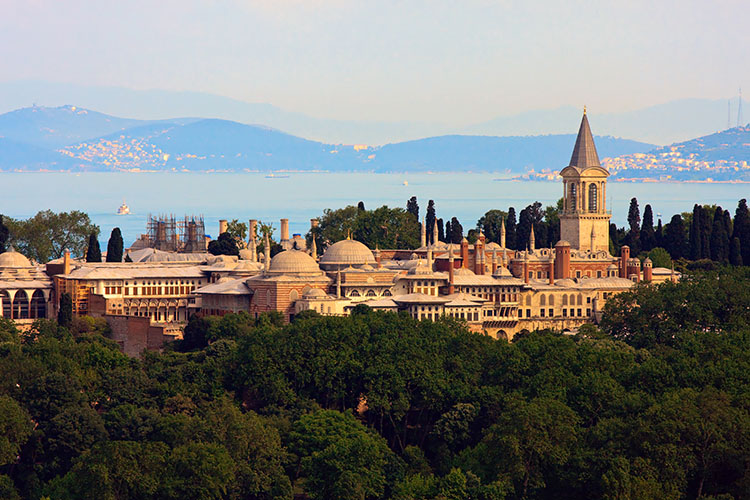 Yet another must-see landmark in any tour of the Historic Peninsula, the Blue Mosque is one of the most successful examples of the Turkish–Islamic architecture and takes its name from the color of the spectacular tiles adorning its interior. Situated in the same area, the Süleymaniye Mosque was commissioned by Suleyman I (the Magnificent) in 1550 to Sinan the Architect. The architectural splendor of the mosque, coupled with the glory of the expansion era of the Ottoman Empire, is bedazzling.

One of the oldest towers in the world also included in UNESCO’s Tentative World Heritage List, Galata Tower was originally commissioned in 528 by the Byzantine Emperor Anastasius as a lighthouse and was used to spot fires during the Ottoman era. Today, it serves its guests as a museum and a restaurant. And while in Galata, you should also visit the Crimea Memorial Church —a typical Scottish-English town church erected by the British during the Crimean War and serves as the only Anglican Church in İstanbul. 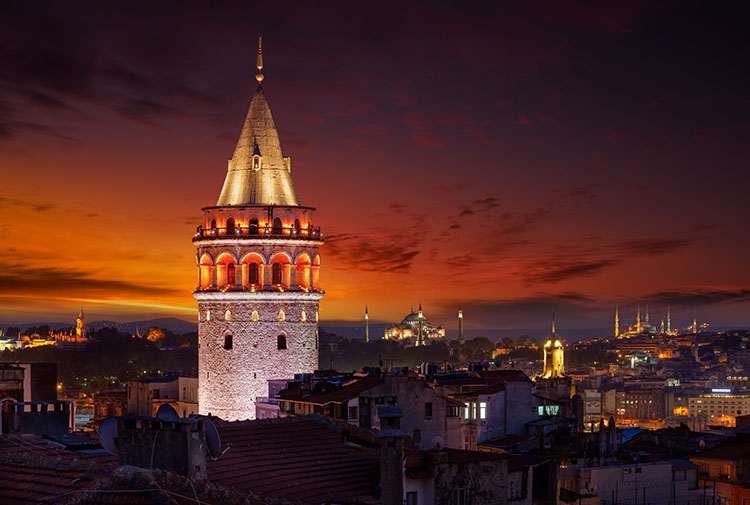 The tour of the Bosphorus coastline is not enough; one should also take a boat tour along the strait. You can also disembark at the piers of the various neighborhoods along the Bosphorus throughout the tour. Those who take the trip will also find a chance to see from the sea various magnificent Ottoman palaces including the Dolmabahçe Palace, commissioned by Sultan Abdülmecid on the European side, and the Beylerbeyi Palace on the Asian side and Çırağan Palace on the European side, both of which were commissioned by Sultan Abdülaziz. The Bosphorus will reveal to its visitors its matchless beauty with its historic palaces, the glorious Ortaköy Mosque on the waterfront and the eateries surrounding the adjacent square, waterfront houses that present examples of old and new architecture, small historic piers in each neighborhood, and restaurants on both sides. 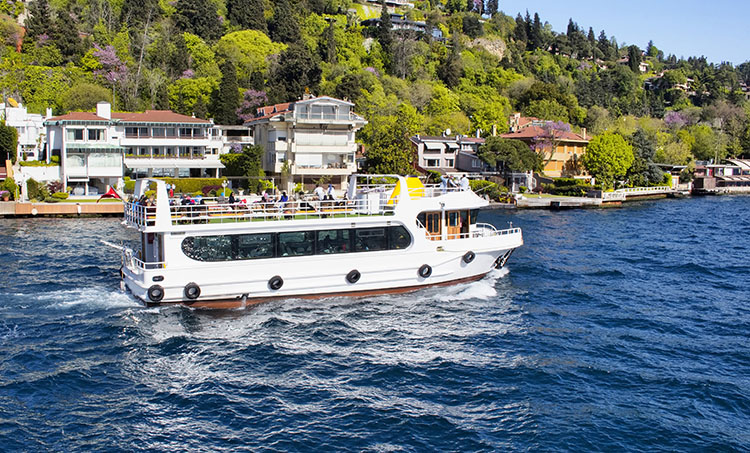 Those who will persevere a bit more for natural beauties can take a joyful ferry ride accompanied by the seagulls to the Princes’ Islands. Spring is the ideal time for a tour involving a long uphill hike to the Monastery of St. Georgia in Büyükada, a walk to the Monastery of St. Spyridon in Heybeliada, and a delightful dinner against the sunset in Kalpazankaya in Burgazada. 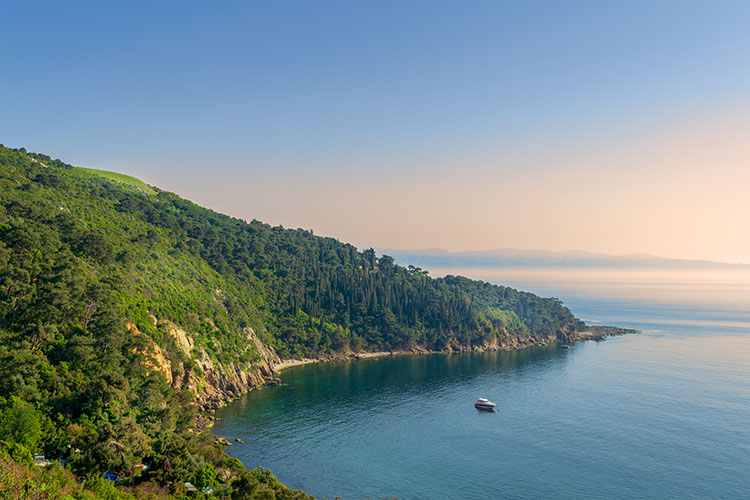 In İstanbul, early spring is mimosa time, which dazzles the visitors with its smell and view, particularly in the Princes’ islands. Those who miss the mimosas can still catch the Judas trees that adorn the Bosphorus coastline and paint the city in purple in April. 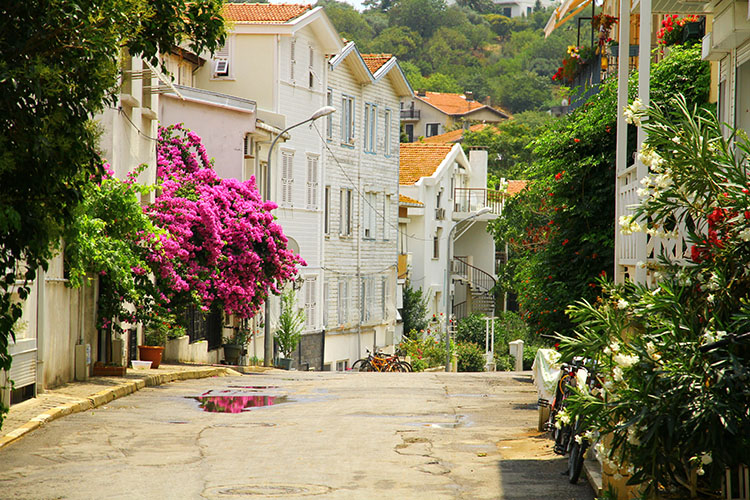 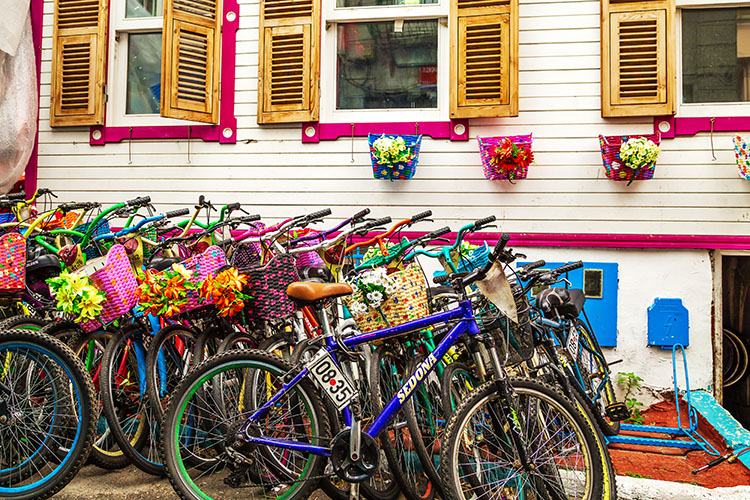 A small town in its own right with its well-maintained, two-storied timber houses steeped in a cultural and historic texture, Kuzguncuk is among the neighborhoods that must be visited on the Asian side of İstanbul. One of the most delightful areas to visit with its fishermen, kebab shops, and restaurants renowned for their traditional Turkish home cooking, Kuzguncuk is also a favorite destination for those who love their tea and coffee with the Kuzguncuk Çınaraltı Tea Garden, which is one of the most delightful areas for a tea or coffee by the seaside. 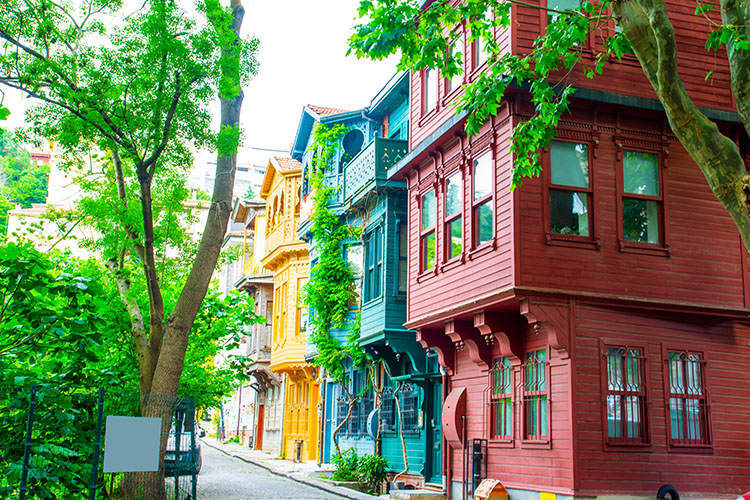 Included in UNESCO’s World Heritage List, Balat is among the neighborhoods that preserved their historic texture on the European side of İstanbul with cobblestone roads and colorful, two- or three-storied timber houses with oriel windows. A center of attraction with its peerless Golden Horn view visible from its streets, and art galleries, Balat is home to structures that are very dear to the Jewish, Christian and Muslim inhabitants of the city. Landmark structures that represent a significant historic heritage include St. Nicholas, St. George, Greek Orthodox Patriarchate, St. Demetrius Church and Bulgarian St. Stephen Church, Gül Mosque, Wood Minaret Mosque, Küçük Mustafa Paşa Bathhouse and the Chora Museum. 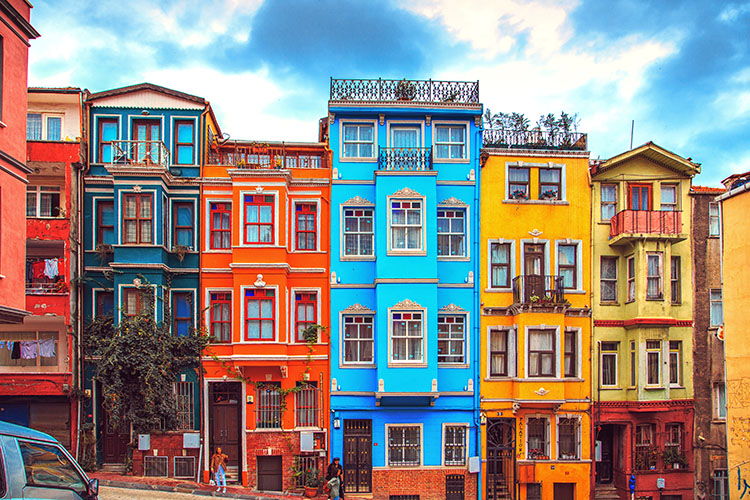 Karaköy boasts magnificent 19th-century buildings on the Bankalar (Voyvoda) Street leading to Galata as well as Sinan the Architect’s works such as the Kurşunlu Han and Azapkapı Mosque as well as other historic structures such as the St. Gregory the Illuminator Church of Galata, Surp Pırgiç Armenian Catholic Church, and St. Nicholas Church. Having risen to prominence recently, this old neighborhood is yet another must-see with its art galleries, cafés bustling with its young clientele, and restaurants offering selections from a host of cuisines. 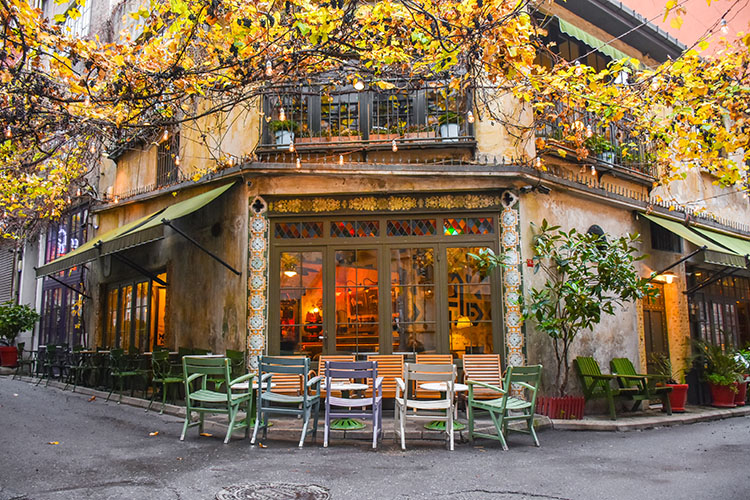 Visitors can also transform their trip into an intense arts & culture event. Featuring a vast collection of artifacts recovered from the extensive geography once under Ottoman rule, the İstanbul Archaeological Museum mesmerizes its visitors with more than a thousand items on exhibit as well as its building. Turkish Islamic Arts Museum stands out as the first museum that brought together Turkish and Islamic works and the last museum opened in the Ottoman era. For those who wish to experience a more modern and current art life in the city, the top destination will be Türkiye’s first museum of contemporary art, İstanbul Modern.

As a port city that remained at the junction of trade routes throughout history, İstanbul has always been a center of shopping from antiquity to modern times. The old city, which is enclosed by the city walls, hosts former commercial areas such as the historic Grand Bazaar, Egyptian Bazaar, Çiçek Pasajı and Tahtakale between Eminönü and Beyazıt, which you can tour to see the oldest commercial venues. For those who wish luxurious shopping, a vast selection of local and world-renowned designer brands are carried on high streets in Nişantaşı on the European side and Bağdat Street on the Asian side as well as shopping malls across various areas of the city. 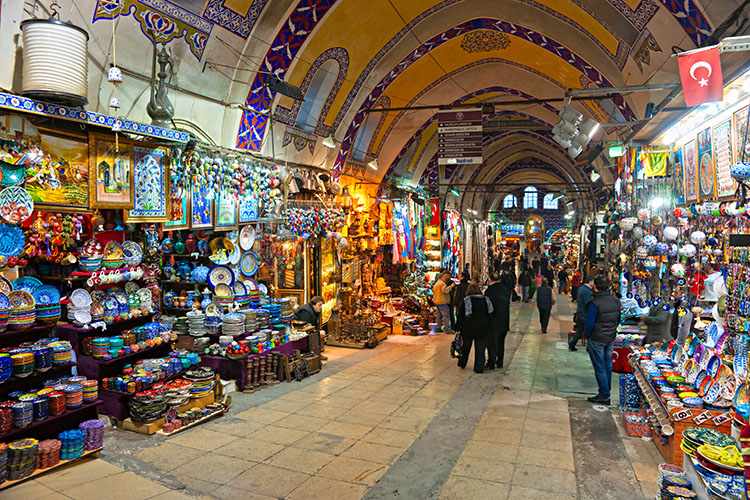 Finest examples of the Ottoman court kitchen and world gastronomy

İstanbul has a long-established culinary culture dating back to the Byzantine and Ottoman eras, and it serves as a bridge with the world gastronomy thanks to its current cosmopolitan texture, top chefs and restaurants that represent the world cuisines. Restaurants across İstanbul feature the Ottoman cuisine and culture from the early 1900s, serving dishes from the court kitchen to world-renowned celebrities visiting İstanbul. At these restaurants, the finest examples of the Ottoman court kitchen and rich Anatolian cuisine are available for gastronomy enthusiasts.