Çatalhöyük is a city founded 9,000 years ago, and this UNESCO World Heritage Site is well-worth visiting to see the remains of an ancient (like, REALLY ancient) city. But what makes it so incredibly special? Well, at the moment, Çatalhöyük is the first known city in the world – the first place where surrounding villages came together and formed a central location and began the sort of urban civilization that dominates the modern world.

What we see at this incredible site is a large city (upwards of 10,000 people at its height) where humans came together, and we see not only the practical applications of how houses formed, but also how the roots of art, religion, and culture came to form as our species grew more accustomed to a settled, sedentary lifestyle.

Equally incredible is the sheer success of the city. It existed for over 2,000 years as a city in various forms, a truly incredible feat compared with today's modern cities who've, in most cases, not lasted even half of that. So what is Çatalhöyük exactly? Let's take a closer look. 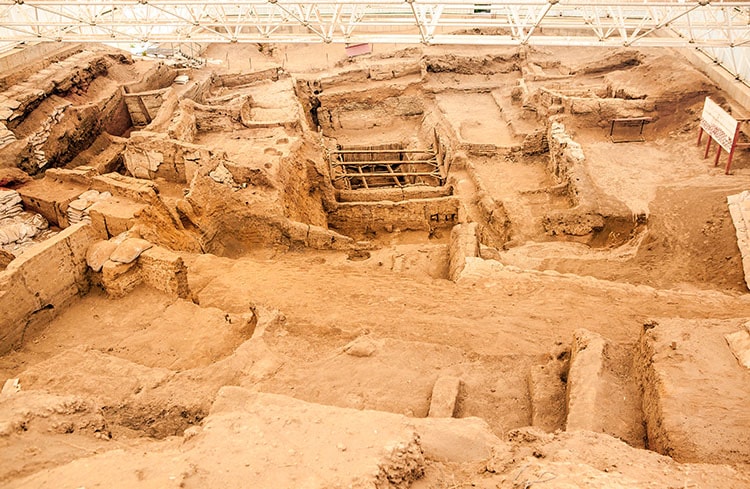 Çatalhöyük was settled primarily between 7500 BC and 5700 BC. The name is Turkish, meaning "forked hill". It's unknown exactly why this spot was chosen (or why it was eventually abandoned), but a river once flowed between the two hills that make up Çatalhöyük, with the settlement itself built on alluvial clay, making it particularly amenable to agriculture.

The city appears to have been truly residential, with no known public buildings discovered to date. The population probably fluctuated between 5,000 and 7,000 people, hitting a maximum of around 10,000 possibly. Mudbrick houses are clustered very closely to one another, and neighbors likely traded with one another as well as married each other, feuded, helped and ate together, much as we do in modern societies.

There were no streets or paths connecting houses, instead they were very close to each other forming a honeycomb-like maze, with holes in the ceilings or doors which could be reached by ladder to enter. One could walk along the rooftops between houses, meaning that they functioned as practical streets as well as a source of ventilation along the open roofs of the homes.

The rooms of the homes are surprisingly clean, with middens of waste located away from the ruins. The society also appears to have been remarkably egalitarian, with no houses bearing the marks of a nobility. Men and women appear to have been largely equal, and both appear to have shared the tasks of ritual, artwork, farming, hunting and cooking.

It's clear that as the town developed, so too did its skill in agriculture, undoubtedly with new technology and efficiency discovered over time and ingenious techniques for harvesting and storing developed. 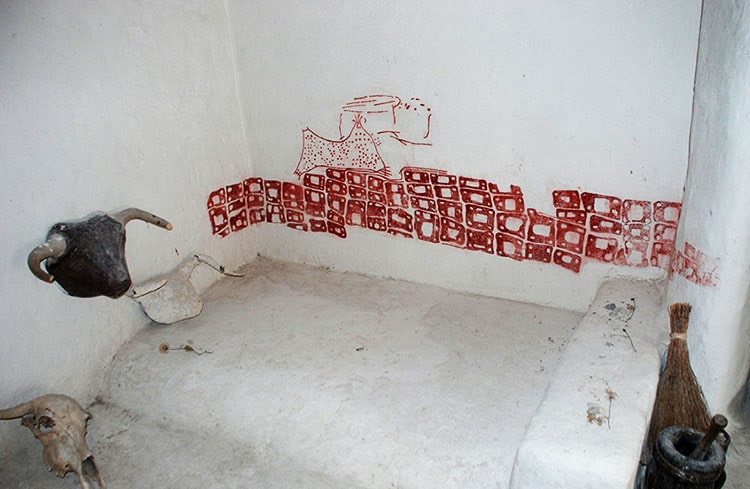 And as the farming techniques developed, so too did the artwork. The walls of the houses in Çatalhöyük are filled with images and scenes. Many of these designs are the same as you'll see in more modern kilims, suggesting just how far back these designs can be traced. Scenes include those of a hunt, dance, stars, leopards, birds, deer, and more.

Heads of various animals, particularly cattle, were mounted on the walls. There's a painting of the village itself, which makes it essentially the world's oldest known map.

Many of the animal figurines may be reflective a local religion, though it's now unclear exactly what that might have been. In particular, a sitting goddess figure, very similar to that of theMother Goddess Kybele which arose in Anatolia much later, dots many of the homes. There are shrines and various other burial grounds that indicate an intricate religion, even if the specifics have been lost to time.

What you can see when you visit 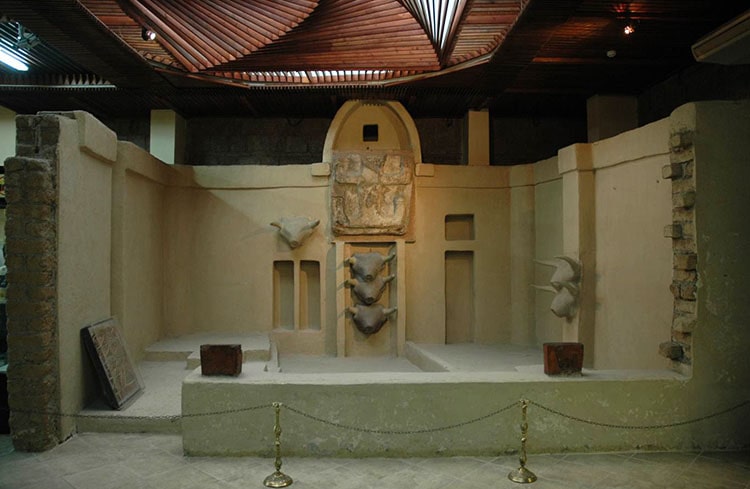 Approximately 14 hectares of space are open to the public, including a museum and a tourism office. The Western mound is closed though the others can be viewed. There's also a nice café for you to relax in and bask in the grandeur of ancient history.

When you enter, there's a small model that allows you take in all you're about to see and get a sense for the scale of it all. There are samples of what it might have looked like and copies of the wall paintings that were discovered.

As excavation work continues on into the present, sometimes various mounds may be closed to visitors.