An Epicurean Journey into Anatolia

Traveling to Türkiye is an adventure, especially when it comes to food. As a bridge between Asia and Europe, Türkiye is a melting pot of cultures and its variety of local cuisines is unmatched. Turkish cuisine’s richness and diversity will be celebrated even more in 2020. The Turkish Culture and Tourism Ministry announced that 2020 will be designated as the “Year of Turkish Cuisine”, introducing a host of events to promote the country’s delicious flavours. In honour of this, let’s embark on a culinary journey in Türkiye. 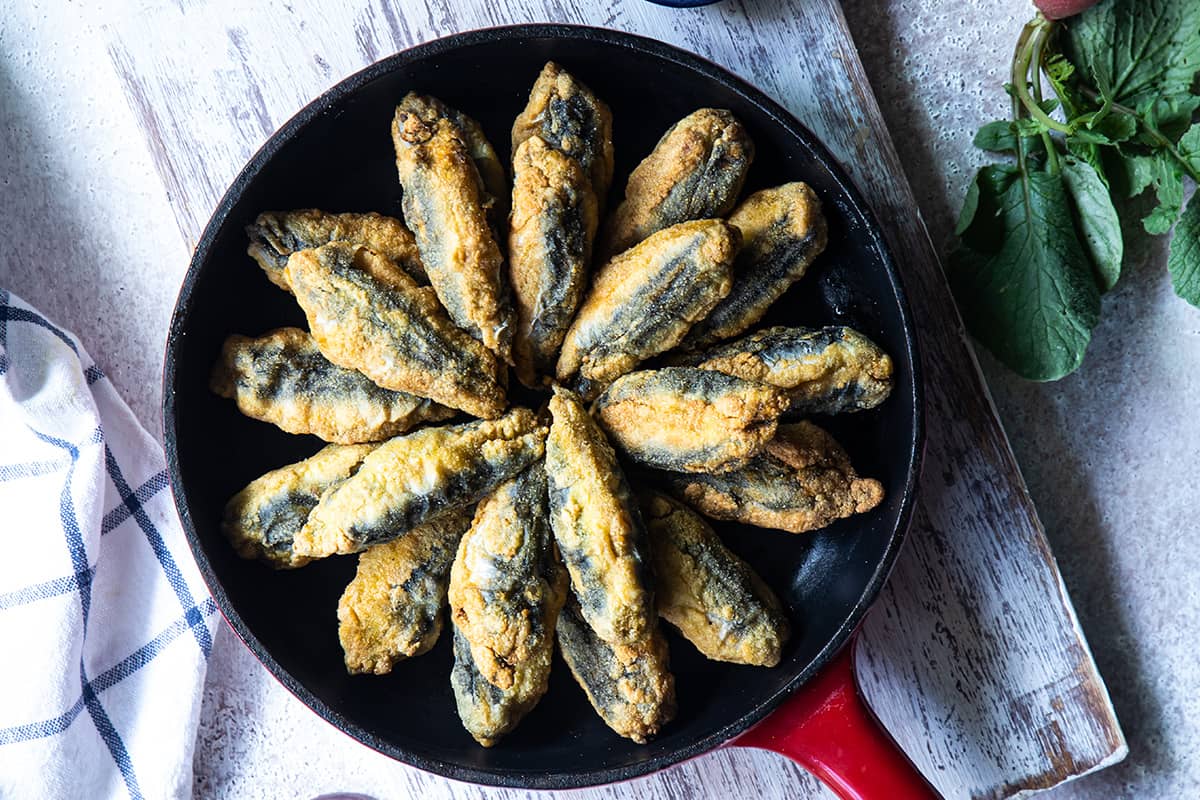 Land of fish, hazelnut and corn: The Black Sea

Nestled between the sea and green mountains, the Black Sea region (Karadeniz) has a unique geography and climate which resulted in a traditional cuisine shaped around fish, nuts, tea and corn. This is a lush landscape dotted with tea plantations, charming cities, quaint villages and mountain pastures. One of the leading actors of the Black Sea cuisine is fish, particularly the European anchovy called “hamsi” in Turkish. It is fried (“hamsi tava”), cooked with rice (“hamsili pilav), put into pastries and bread (“hamsili börek” and “hamsili ekmek”), and even made into desserts.

Corn is also widely used in this cuisine; you can eat delicious cornbread all over the region. A popular Black Sea special is “muhlama”, a cheese fondue made with corn meal. The Black Sea cuisine is a vegetarian’s dream since it features delicious dishes made of various plants and herbs, such as black cabbage, nettles, “merolcan” and “hodan”. In fact, the region is home to hundreds of edible plants and herbs, which are often associated with the long lifespan of the local people. These plants and herbs are usually served lightly cooked.

Must-try flavours include black cabbage soup and stuffed black cabbage served with delicious yoghurt. The Black Sea is also the land of hazelnut or “fındık”. Türkiye is the world’s largest producer of hazelnut and the best kinds are grown in the Black Sea, particularly Ordu and Giresun. Local flavours featuring hazelnut include hazelnut soup and “fındıklı burma”, a dessert made with rolled phyllo. Last but not least, there is tea. The eastern coasts of the Black Sea are filled with tea plantations. Rize is Türkiye’s “tea capital”; the city produces the world-famous “Rize tea.” The national drink of Türkiye, tea is traditionally well-brewed (tavşan kanı) and served in “thin waist” tea glasses. 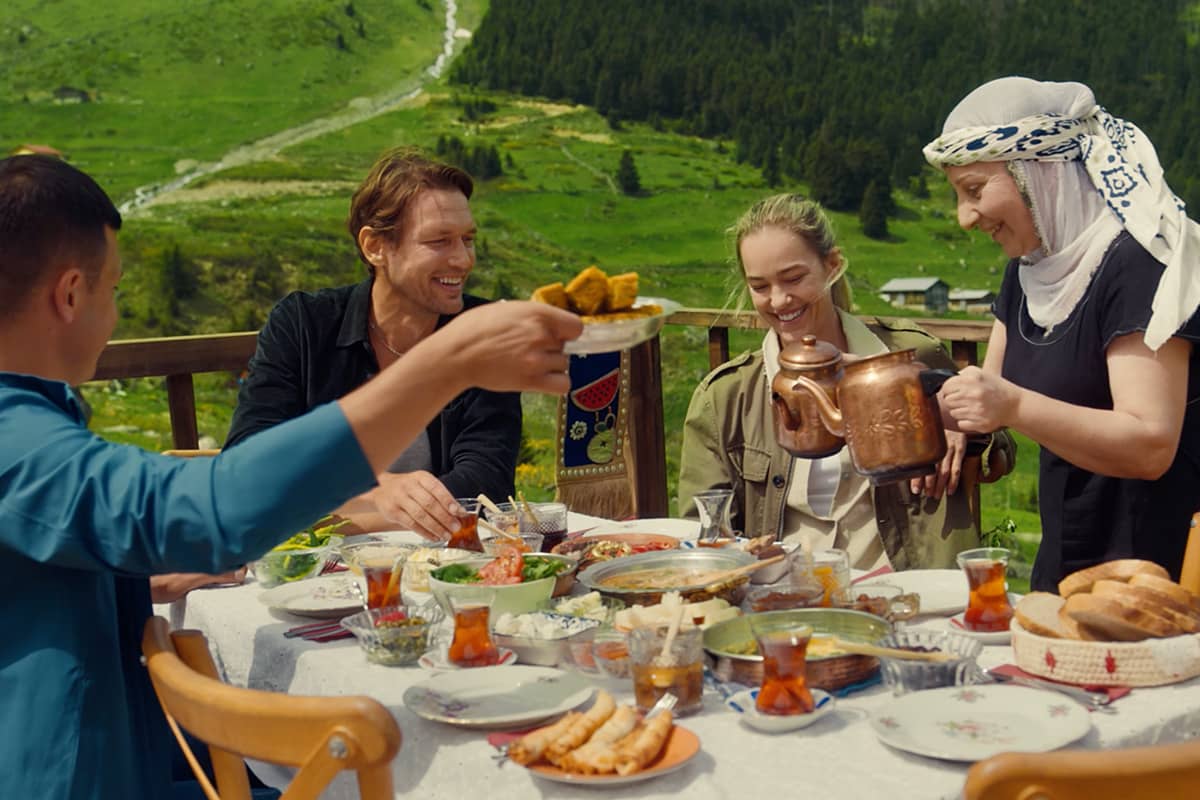 Herbs, olive oil and seafood: A Taste of TurkAegean

Wild plants and herbs, olive oil and seafood… These are the key ingredients of the Aegean cuisine, renowned for its healthy and delicious flavours. Seventy-five percent of all the olives grown in Türkiye come from this region and olive oil is the king of the dinner table (also breakfast and lunch) in the Aegean. Olive oil is predominantly used in cooking but it is also an appetizer by itself. A perfect dipping sauce, olive oil is often sprinkled with herbs like oregano and basil and served with fresh bread. Herbs and green plants are also a big part of this cuisine. In fact, they inspired the creation of a festival held in Alaçatı, a charming village about an hour’s drive from Izmir. 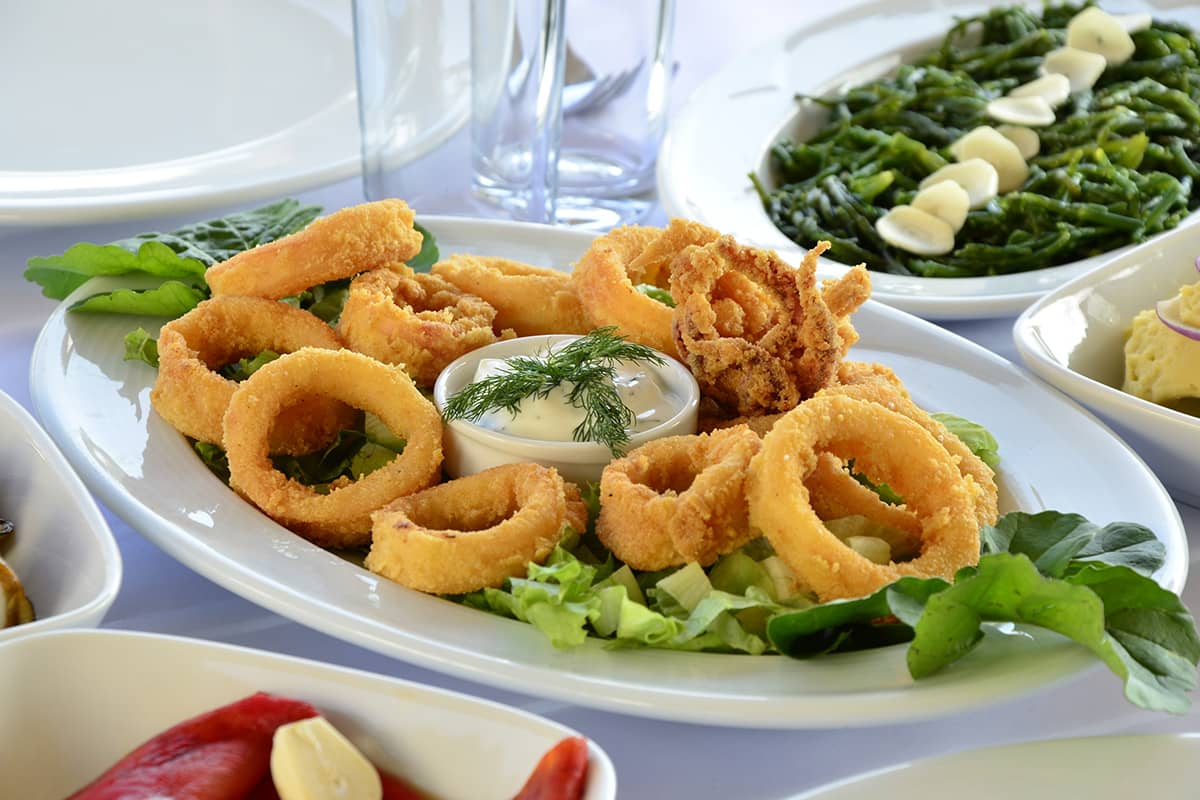 Given the region’s geography, it is not a surprise that seafood is a major part of the Aegean cuisine. The most preferred cooking method is grilling. Freshly caught fish (or any kind of seafood) is grilled and served with a salad of finely chopped tomatoes, cucumbers, onions and peppers. Most popular fish types include seabass (levrek), seabream (çipura), haddock (mezgit), sardines (sardalya) and papalina, a small type of sardine. Smaller fish such as sardines, red mullets (barbun) and horse mackerel (istavrit) are can also be fried. Grilled and fried calamari, octopus salad, shrimp stew and stuffed mussels are some of the region’s special seafood dishes.

A Taste of Turkish Riviera

Fresh vegetables are at the heart of the Mediterranean cuisine; they are roasted, grilled, sautéed, cooked in olive oil and freshly served in salads. The salads are usually served with lemon juice, extra virgin olive oil and pomegranate molasses (nar ekşisi). Appetizers and olive-oil dishes are essential to the Mediterranean cuisine. “Babagannuş” (roasted eggplant with peppers and tomatoes), “humus” (chickpea purée with tahini), “tarator” (a sauce made with yoghurt and lemon juice), “piyaz” (cooked white beans with onions), “cacık” (yoghurt with mint and cucumbers) are some of the most popular appetizers. 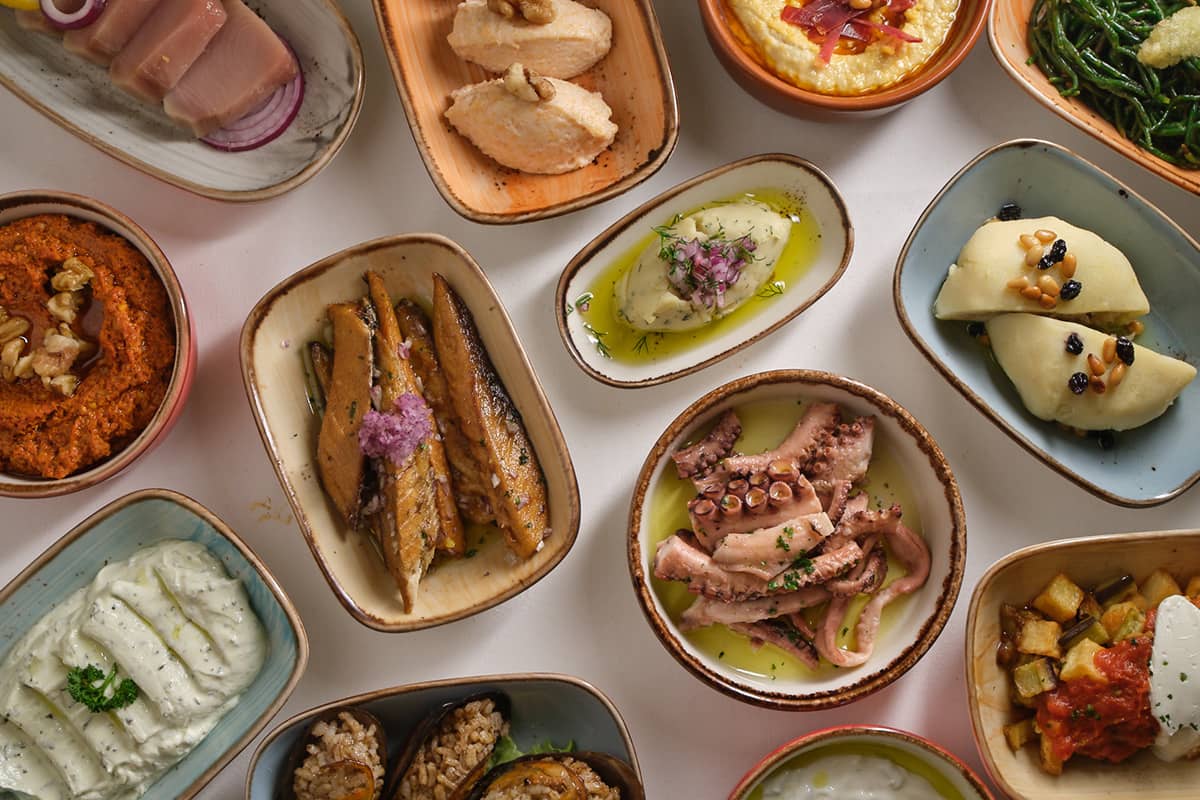 Pomegranates, as well as nuts such as pine nuts, almonds and walnuts are regular ingredients in sauces and spreads. Dried legumes, particularly chickpeas, white beans, peas and lentils are a major source of protein. They are used in soups, salads and dishes, together with herbs like basil, oregano, thyme, rosemary, parsley, dill, mint, fennel and cilantro. Yogurt and fresh cheeses like feta (beyaz peynir) and “hellim peyniri” are also widely used in dishes and salads. Meat is usually used sparingly; it is generally grilled and served with fresh herbs. Seafood is a much more consumed source of protein. Fish is grilled, fried or poached and served with salads. Moreover, the Mediterranean is the citrus capital of Türkiye; oranges, lemons, tangerine and bergamot are made into desserts, jams and marmalades.

Türkiye’s eastern and south eastern regions have a rich variety of local cuisines but they share various dishes and ingredients. Meat (beef as well as lamb, sheep and goat), hot spices, legumes and grains like bulgur, lentils and rice are the predominant ingredients while kebab, “pide” (thin layers of dough topped with meat, cheese or vegetables) and “lahmacun” (a flatbread topped with minced meat and vegetables) are arguably the most famous flavors. However, these regions have so much more to offer. In Gaziantep, a gourmet-worthy city in the southeast, you can try countless types of kebabs including eggplant, pistachio and shish kebab. But the city also has hundreds of pot meals, soups, stuffed vegetables and desserts. 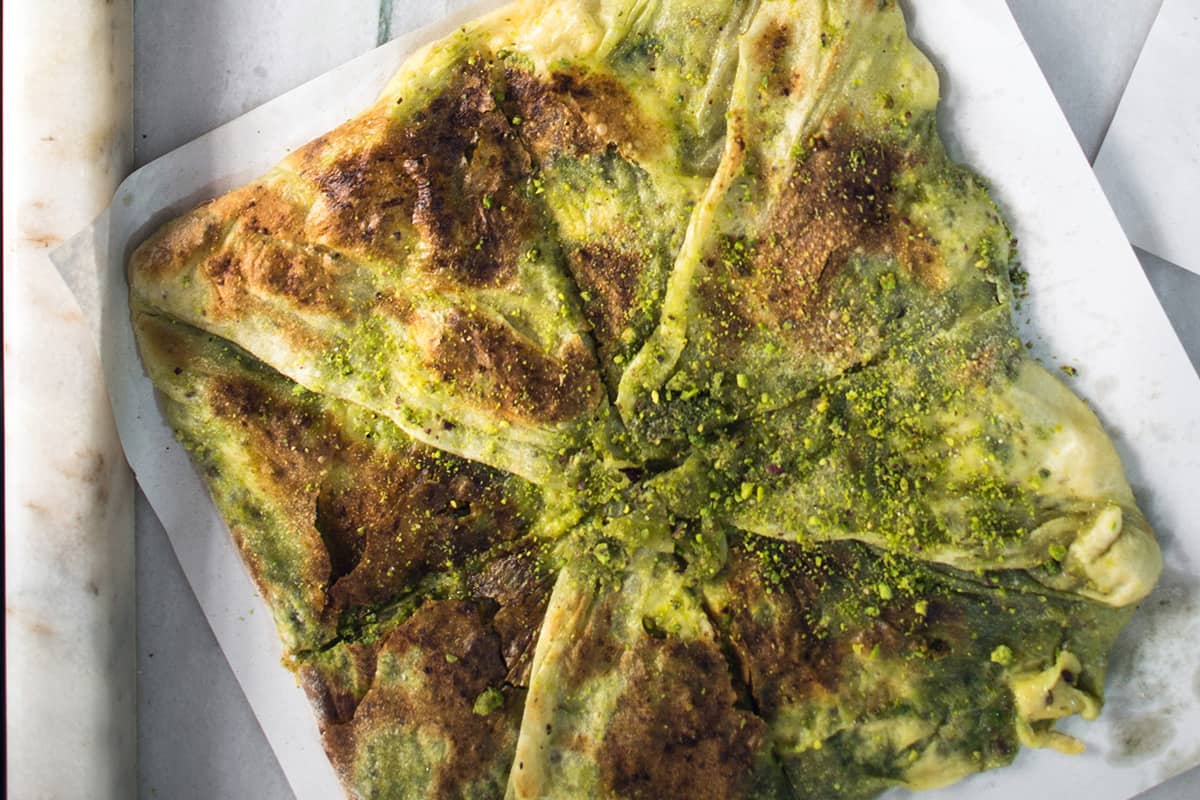 Must-try dishes include “analı kızlı”, a rich soup made with meatballs, tomatoes, bulgur and chickpeas; “yuvalama”, a complicated dish made with yoghurt and a special type of meatball, “alinazik”, eggplant purée topped with minced meat, “şiveydiz”, a stew with leek, onions, meat and yogurt, and “beyran çorbası”, a broth made with lamb meat, rice and garlic. There are also a lot of desserts to choose from; baklava, a rich dessert made with layers of phyllo filled with pistachios and syrup, may seem like the obvious choice but you can also try “katmer”, a flaky pastry dish filled with pistachios, “şöbiyet”, layers of phyllo filled with cream and nuts, and “kadayıf”, a syrupy dessert made with string pastry filled with nuts.