Being a traveller in the land of eccentric landforms and memorable sunsets is one of the most intimate and intense natural experiences one can get in a lifetime.  Seasons fluctuate, yet Cappadocia parades its unique personality with a change of wardrobe, where history goes hand in hand with the earth-born nature.

Cappadocia… A dream of a land, gracefully sparkling its texture: extraordinary landforms bestowed by the nature itself, mesmerizing vistas dusk till dawn, wonderous designs carved into the soft tocks, coloured balloons greeting fairy chimneys with every chance they get, and traces of history taking guests to travel in time. 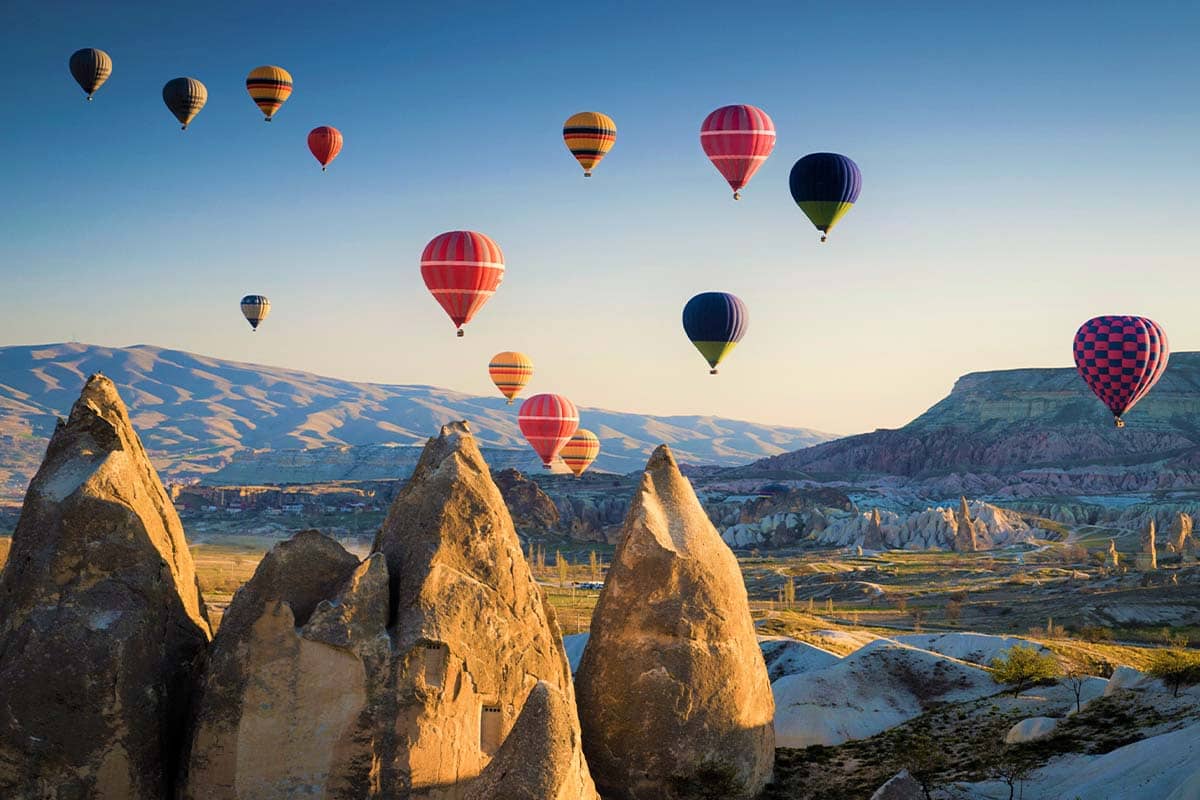 The sublime story of the land dates back millions of years ago to the eruption of the two volcanic mountains of Central Anatolia, the Erciyes and Hasan mountains. The tuff and basalt layering itself throughout the region then gets formed by the wind, and hot and cold air, turning amorphous into the mystic fairy chimneys for miles to flaunt. As the reinvention of nature has completed, earthlings began to show their faces and added invasions, riots, and migrations to its history being written.

First Christians who fled away from oppression and violence made the fairy chimneys their home. After settling down, carved their churches inside these very same rocks. They built complete underground cities, with ventilated living areas and everything. Today, those ancient structures seem to require permission from the present time in order to take you on a magical journey in both time and dimension. Are you ready to shift the nature of reality into something extraordinary?

Panoramic view of a fairy tale

Imagine a gigantic, porous rock stretching towards the sky and now imagine you’re standing on top of that said rock. If you’re not a plane, a balloon or a hawk, the best spot you’ll soak in the geography would be here, the Uçhisar Castle. Uçhisar also has one of the most beautiful walking paths in Cappadocia going right through Pigeon Valley. 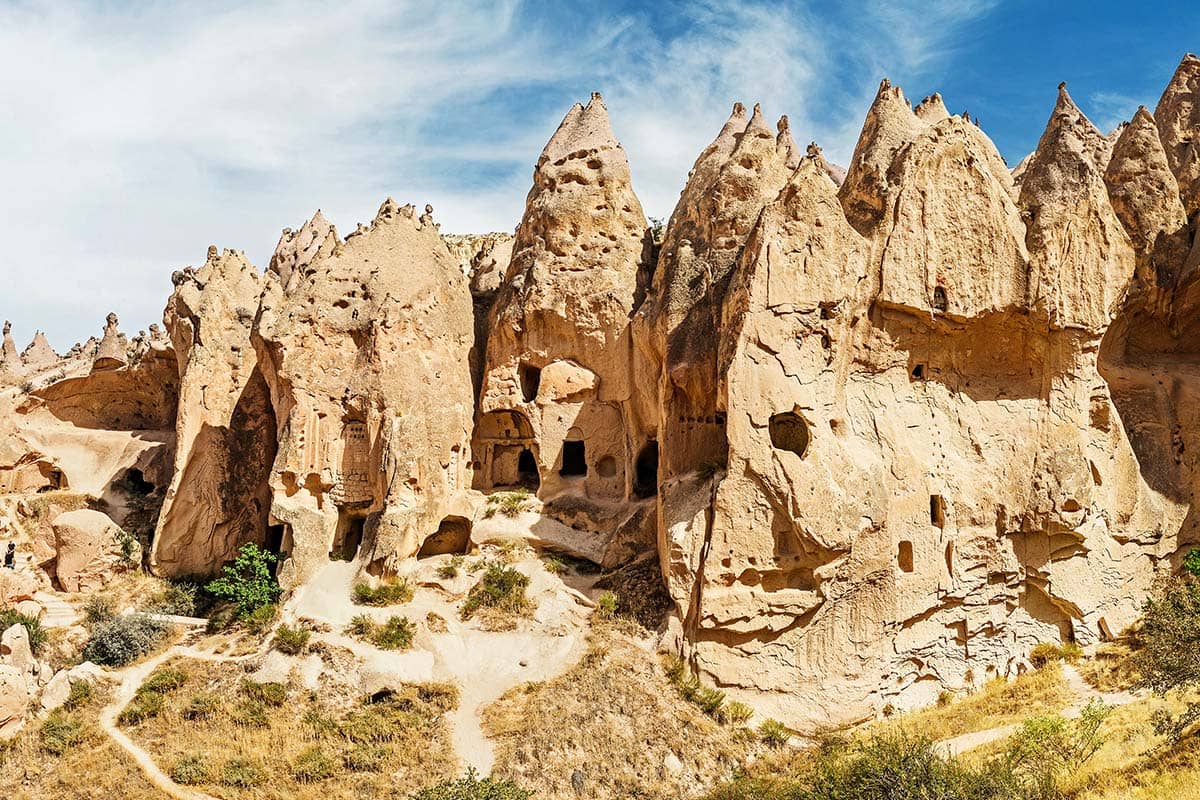 You should wander through the tunnels opened up by the stream’s mighty flow while listening to the pigeons flapping their wings as they leave their nest and saunter through the giant formations in the valley in awe, knowing that they were sculpted by no one but nature itself.

Uçhisar was established around the castle as a small village, it has grown over time and made its way down the slopes. Some say there were underground roads, kilometres long, that ran from Uçhisar Castle to the Ihlara Valley way before, adding more to the unique traces of civilizations. Today, the castle is surrounded by shops and stalls, selling many souvenirs such as carpets, marble ornaments, mirrors and of course – flavoursome dried nuts and fruits to keep you company.

The address for the wanderlust

Continuing the dizzying discoveries, we arrive at Göreme. Positioned in the centre of the region, the town remains calm despite the crowd’s visitors form. The blowing wind and hasty rainfall over many years have created the beauty that the town is known for. Listed as a UNESCO World Heritage site in 1985, Göreme casts its enigmatic charm for miles. The churches carved into these soft rocks and especially the many underground cities such as Derinkuyu and Kaymaklı sit still with their mystery intact. 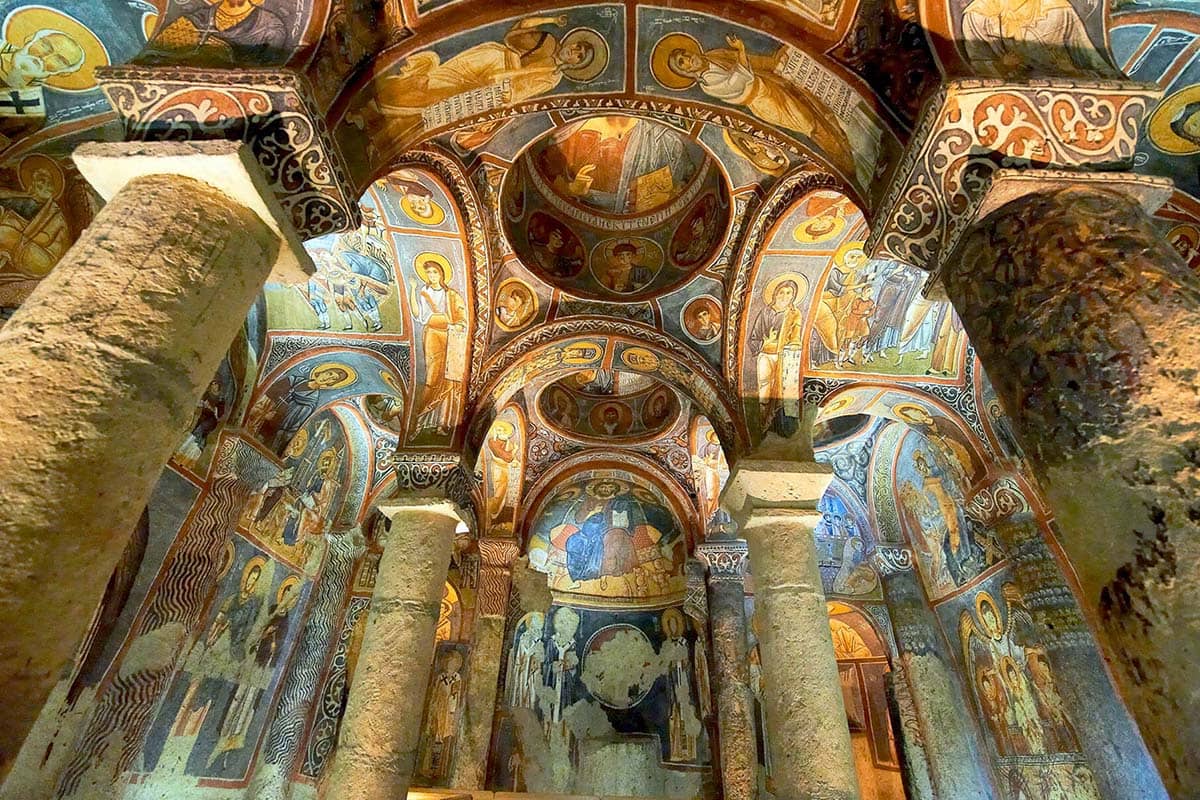 The captivating church interiors depict the messiah’s life through detailed frescoes alongside painted ornaments reaching to this day. One of the most important structures of the Göreme Open Air Museum is without a doubt, the Dark Church. What makes it stand out is no other than its lively frescoes. Dating back to the end of the 11th century and the beginning of the 12th century, its name derives from the very little light it receives from a small window in the narthex section.

However, the lack of light has made this church keep its treasures alive, letting the frescoes resist the ruthless nature of time itself. Both the church and narthex carry vibrant and impressive depictions from the Bible. No wonder this church tops the lists of travellers…

Conquering the scenery from up above

As dawn breaks, you’ll float in the air with great calmness… Rock formations dating back millions of years, and unimaginable landforms unique to this geography lie beneath. Valleys offering majestic sceneries, high altitudes painting a multi-hued topography down below, slopes weaved in velvety texture…

The land of fairy chimneys has become the centre for hot air ballooning gradually over the past 20 years and the intoxicating morning cruises have been attracting more and more travellers from all over the world with each passing day. The balloons, which go up to 500 meters high, depart from the trails around Göreme early in the morning. To book yourself one and soak in the alluring wonder from up above, visit the companies located in Göreme.

A jewel box of a town

Moving from Göreme to the east, Ürgüp welcomes you to its ceaseless wonders. Aside from it being the largest settlement in Cappadocia, it’s also a magnificent source for its immersive sights. These two elements combined bring out one of the most unique pictures.

There is an Anatolian town bursting with hotels, restaurants, and shops, and right by its side lay cave dwellings. The stone mansions placed on these very rocks are known to be the trademark of this region. Besides its detailed mysticism found in every corner, Ürgüp is also the place to break loose and shake the worries away –it’s where you’ll find the best nightlife in Cappadocia. 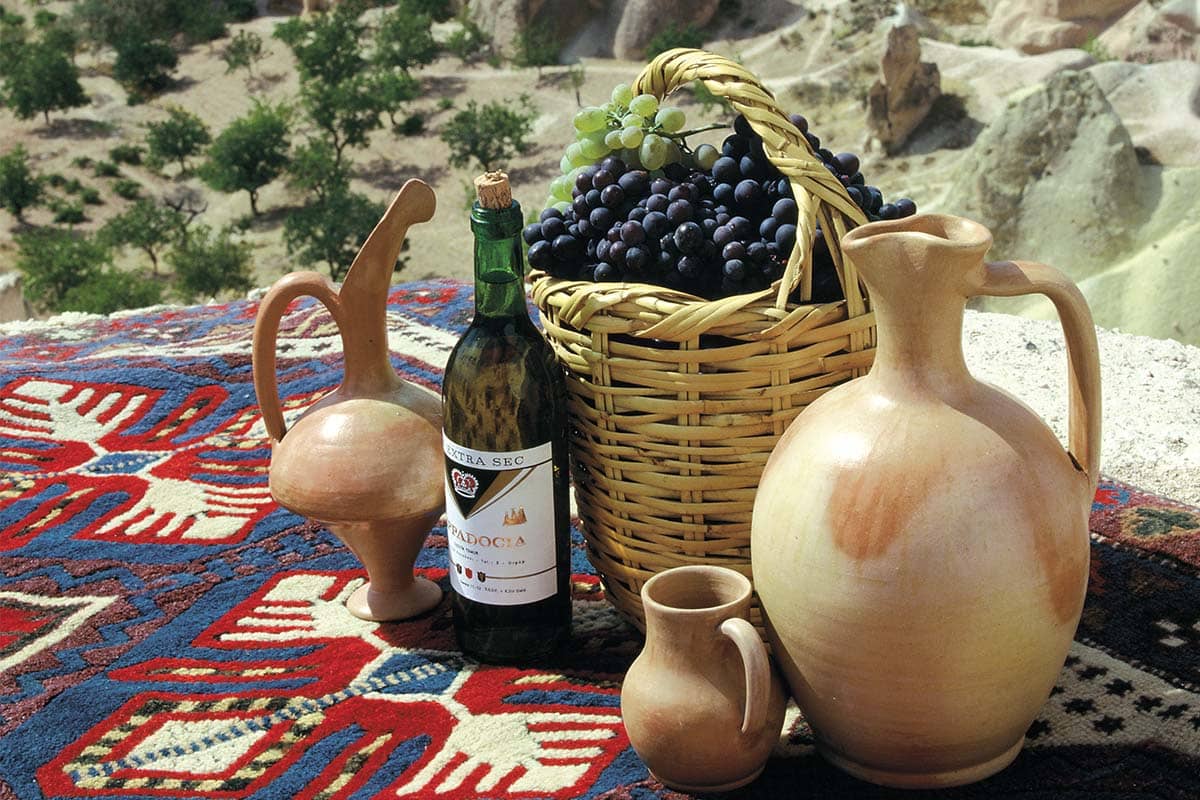 It wouldn’t be fair if you’d come all this way and returned without trying the delicious Cappadocian wines. This region holding the well-established winemaking tradition for thousands of years owes its famous vineyards to the tuff formed by volcanic activities. Anatolian grapes such as Öküzgözü, Kalecik Karası, Boğazkere, Narince and Emir grow graciously thanks to the rich tuff soil. It gets better! Cappadocia wineries are open for visitation all year long, making your trip possible at any given moment.

Once in Ürgüp, another stop you’d want to make would be Avanos, the cultural epicentre of Cappadocia. Its unusual livelihood is what makes this town intriguing. As the Kızılırmak has made its way flowing patiently through Avanos, the soft and oily clay sourced from the former riverbeds has been the highlight here –making Avanos the home of pottery dating way back to the Hittites. Each individual flaw in clay brings out the authentic beauty in these handmade pieces, then coloured in earthy tones and of course turquoise. You can always join a pottery workshop and create your own “happy accident”, shop goodies in lively bazaars and lighten your mood by the riverside.

Every other spot here serves the best dreamy sunset, but one sets itself apart from every other: Red Valley. Located just near Çavuşin Village and Ortahisar, Red Valley draws the most romantic and unforgettable moments as the sky takes on crimson red tones. Visitors are encouraged to start their walk through the rare formations red tuff creates just before sunset and take their place at the viewing terrace just at the right moment to soak in the glamour.

Here, Ortahisar Castle is considered one of the first multi-storey settlements in the world, making it an architecture to be curious about just as you begin. The structure, which provided shelter for the historical Silk Road caravans during the Hittite period, is actually a giant fairy chimney in disguise. Being one of the highest spots in the region today, visiting this castle guarantees a teleport to ancient times. 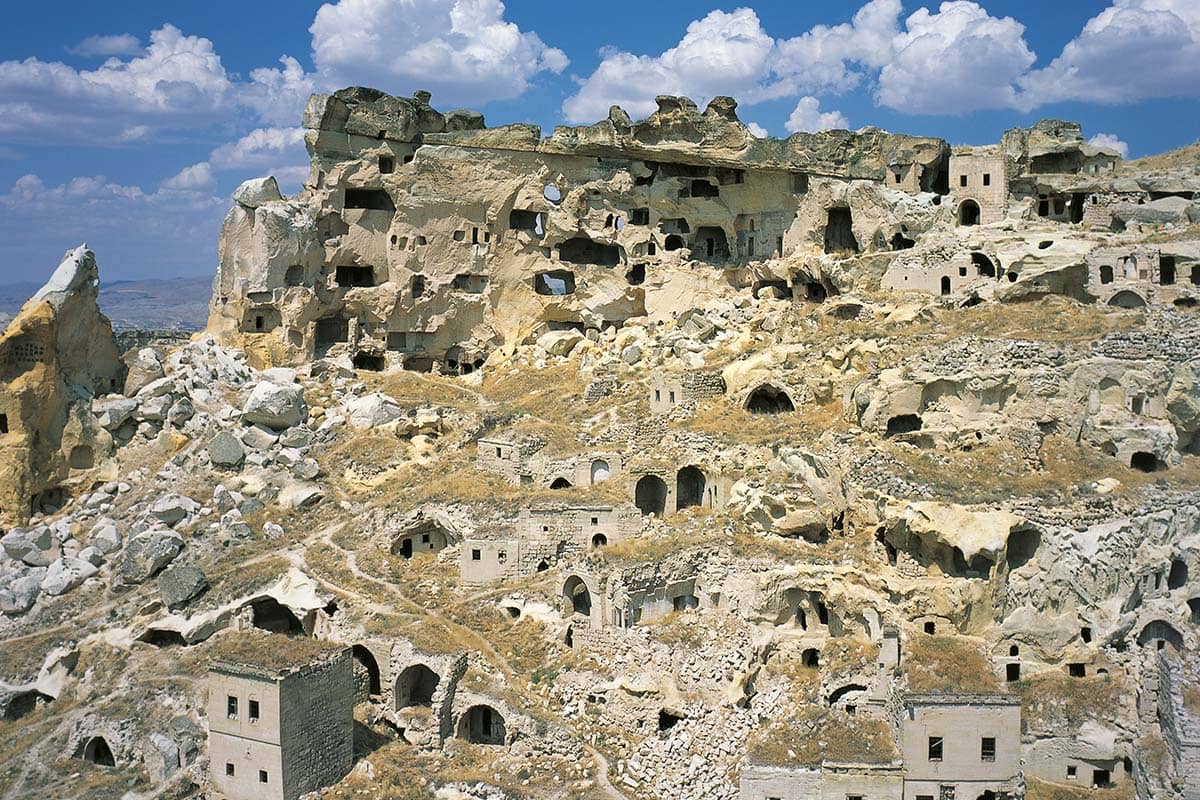 A life engraved in volcanic ash

Your next destination may not radiate its allure from afar, but once in, you’ll leave in awe for sure. Çavuşin village lies within minutes from Göreme. Once you’re through this seemingly ordinary village, your path will take you to ancient ruins: stone buildings and fairy chimneys making their way to the village square. If you wish to further explore the ruins, just follow the tracks and you’ll find yourself in an area famous for its churches and clergy houses.

You can access the oldest churches, built between the 1st and 10th centuries, through this path. Extending your walk half an hour, you can reach the churches in Güllüdere and Kızılçukur through the most enticing site inviting you just near the slope of a cliff: Basilica and Saint John the Baptist church.

Consisting of three valleys, Zelve is the most intense in terms of fairy chimneys. If you want to examine the beauties of nature, you should start trekking early in the morning. The important churches in the valley are Balıklı, Üzümlü and Geyikli, all hauntingly captivating, illustrating the ancient monastic life.

A boundless dip into the olden days

If you wish to travel beyond time and explore a world you’ve never stepped foot on before, Ihlara Valley is the place you’re in search of. It’s known that the 14-kilometre-long valley has been an important religious centre since the days Christianity has been founded, shining a light on the numerous churches and historical living spaces scattered all around. Here, the frescoed churches formed by the geological features of the region are carved into the rocks in accordance with the spirit of the monastery. 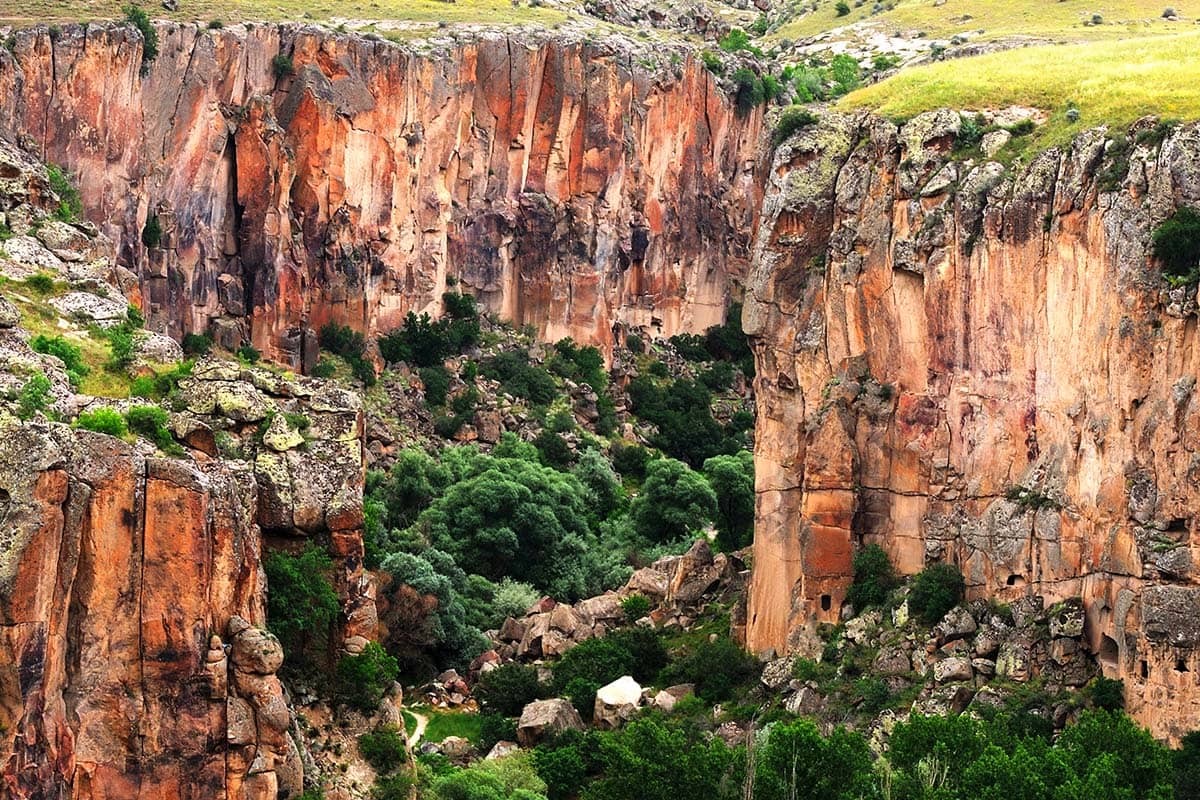 If you wish to visit the architecture and wander inside the mesmerizing designs, you’re in luck. 14 of these churches are open for exploration: Ağaçaltı, Sümbüllü, Yılanlı, Kokar, Prenliseki, Eğritaş, Direkli, Saint Georgeus, Karagedik, Ala, Bezirhane, Bahattin Samanlığı and Batkın Churches. Better gear up before starting your valley walk for this descending 382-step ladder can take up to four hours. Don’t let the timing discourage you either: gazebos built on the Melendiz Stream will allow you to take breaks and rinse your journey down with a cup of tea.

As humans in a vast universe, we sometimes think our very own world is way too familiar; we wonder what else is out there. Nonetheless, even though we get caught up in those momentary routines, there still lies jewels waiting to be coupled with the precious moments we hold on to. Cappadocia is one of those places allowing you to leave our planet behind without actually leaving it. Given a chance, these lands won’t quit on you.