All You Need to Know about İstanbul's Friendly Cats

After walking around for ten minutes in any neighbourhood of Istanbul, any visitor will reach the same conclusion: Istanbul belongs to the cats.

Here are some potential scenes you might encounter: One cat might shamelessly bask in the radiance of the sun on the hood of a car. Appearing out of nowhere, another might start rubbing on your legs as if you were a long-lost friend. A cat might curl up on a chair next to you as you dine at a sidewalk restaurant, patiently waiting for the leftovers. You might also see a gang of cool, nonchalant cats waiting for the scraps right outside the butcher shops and at fisherman's stands. A dotty-looking, middle-aged lady might walk around carrying a bag full of cat food, attracting dozens of cats rushing at her from all directions. 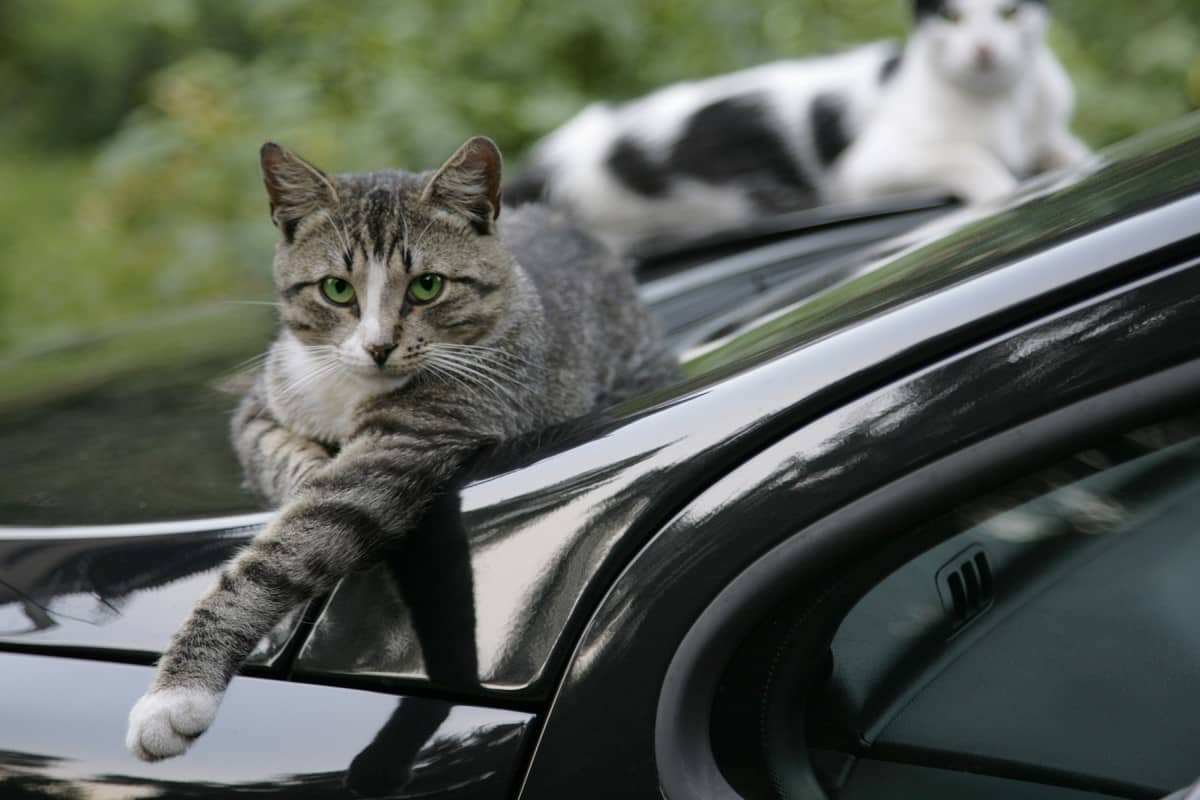 One sleepy cat might have become a part of the furniture at a lively café, while another might gaze at you from the display window of a jewellery store surrounded by gold. But most commonly, you will find them lounging in the middle of the pavement without a care in the world.

Cats of all colours, sizes, and ages are pretty much everywhere here in the city. They are the unimpressed, uninterested onlookers of the hustle and bustle of city life, and they have a devoted public who makes sure that they are fed, sheltered, and cared for at all times.

Under the unbreakable spell of its feline population, Istanbul is perhaps the most cat-friendly city in the world. The famous American novelist Ernest Hemingway once wrote, "One cat just leads to another." It seems most Istanbulites have really taken this to heart. Around 150,000 street cats are roaming the streets. Not to mention the house cats staring gloomily out the windows all day long!

Istanbulites grow up with cats in the house and on the street, sharing the city with them. The tram will stop if the driver sees a cat drinking water from a puddle on its way. One might ride the city bus with you. Another might even cross the Bosphorus on the ferry. No one officially owns these stray cats, but somehow, they are adopted by everyone. 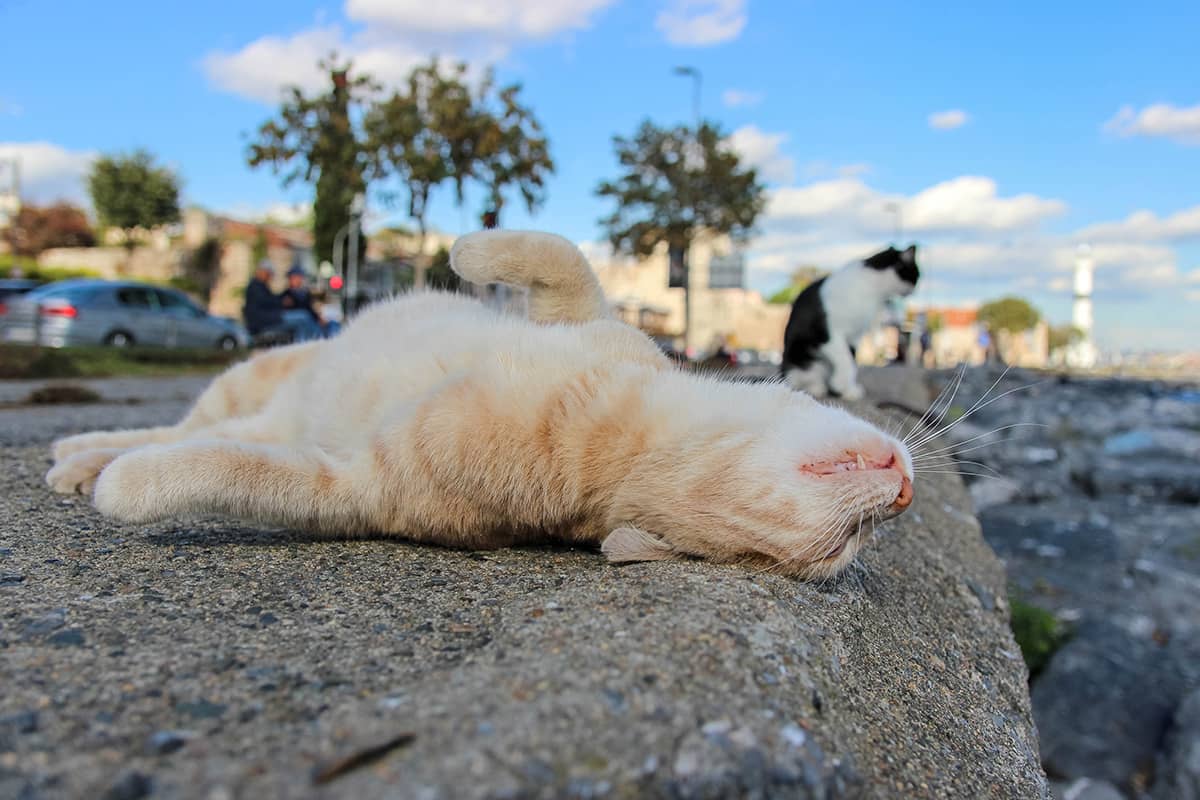 This large community of cat lovers feels it is their duty to care for all the cats on the streets. So, they determinedly place bowls of food and water, and always chip in for the medical expenses of the sick and the injured. Many street corners are filled with cat shelters and feeding stations. It is very common for locals to carry cat food in their bags in case they come across a hungry feline friend.

Some people say cats in Istanbul live an enviable life and are the only ones who get to enjoy the city to its fullest. Considering the fact that they get to sleep 12-16 hours per day and spend one-third of their awake hours grooming, eating tasty food, and walking in the streets of Istanbul, they might be right. 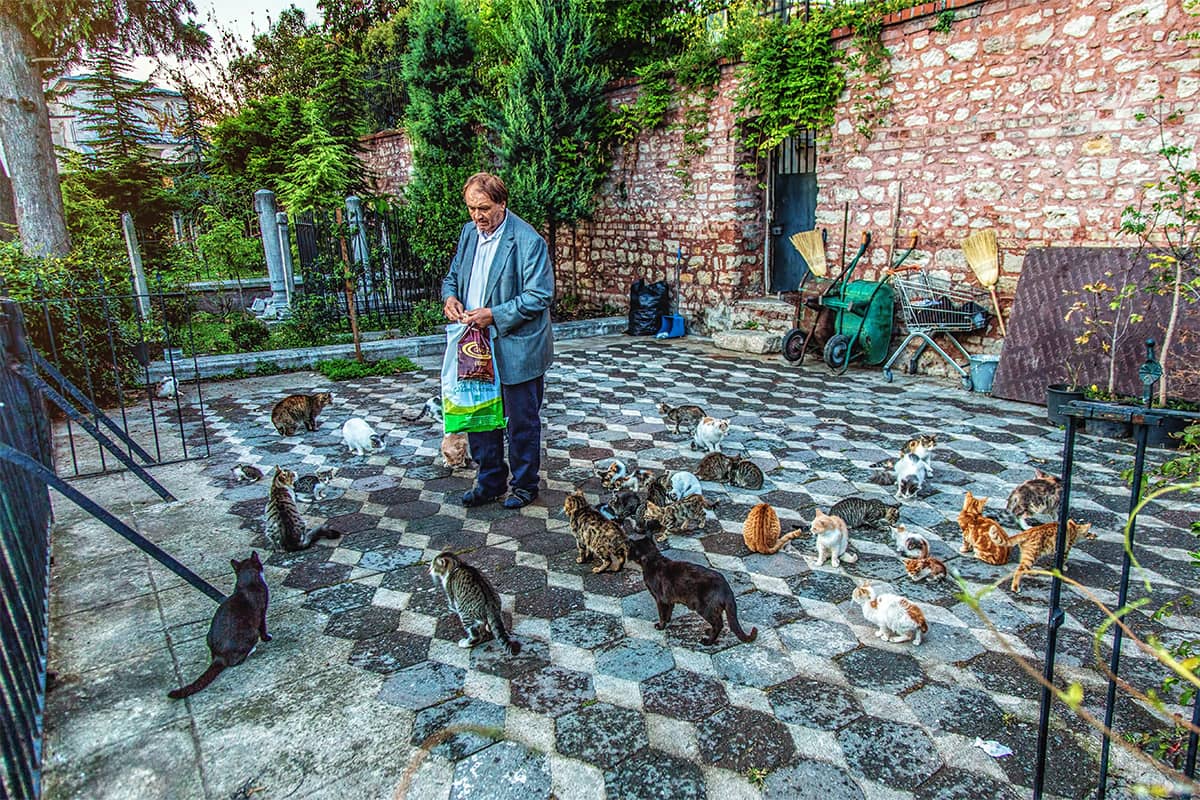 With a special place in the city's heart for centuries, Istanbul's cats are thought to originate from Egypt, where they were first domesticated. The ancient Egyptians considered cats sacred beings, and in Mesopotamia (part of present-day Türkiye), they were put to work, protecting the grain from rodents. According to scientists, cats spread to the rest of the world from Anatolia about 10,000 years ago.

As one of the oldest residents of Istanbul, cats witnessed the rise and fall of empires, but they became the true darlings of the city under the rule of the Ottoman Empire. While in Topkapı Palace, sultans kept big, exotic cats, such as leopards, cheetahs, and tigers (a house cat is technically about 95% tiger in its genetic makeup), local charitable foundations made sure that stray animals were adequately taken care of. And Istanbul's love of cats was embodied by an actual profession named mancacı, which literally means catsitter. 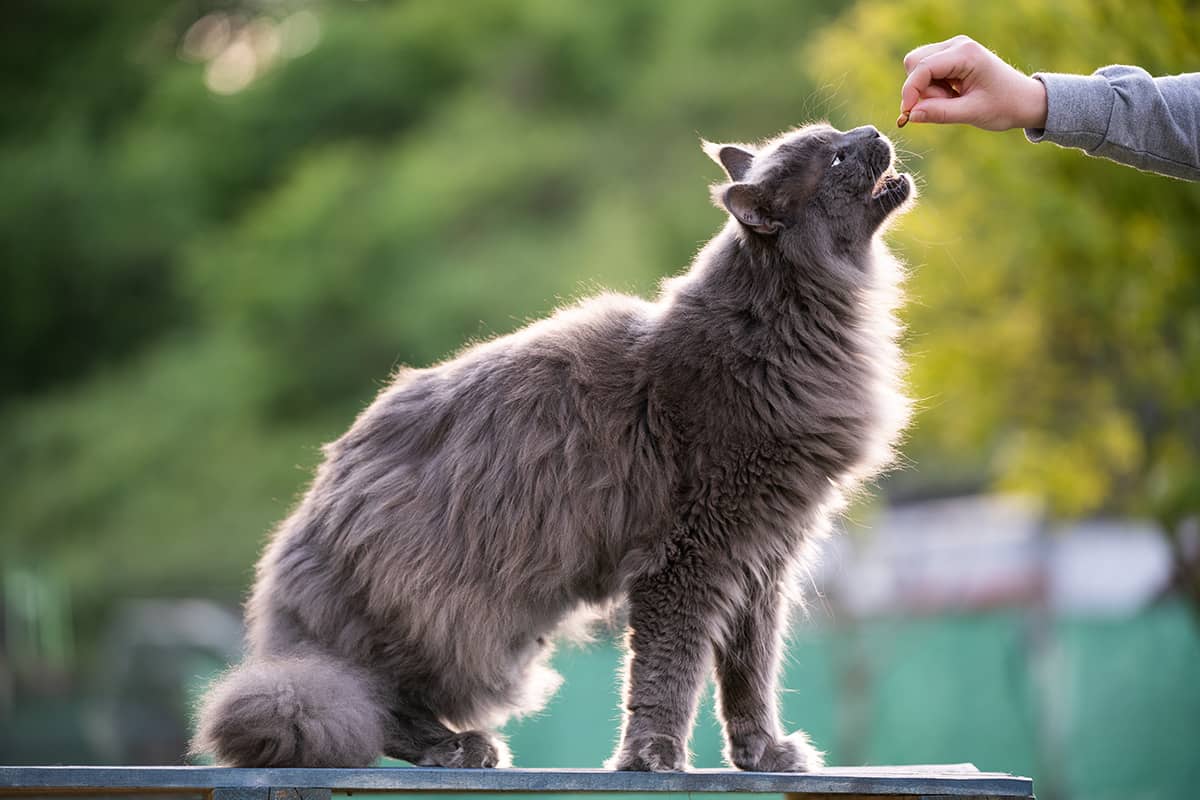 Working on behalf of these foundations, mancacıs were responsible for feeding stray cats. City inhabitants could buy food from them and feed the animals themselves or donate money. This tradition was kept alive in Istanbul until the 70s. Surrounded by dozens of cats shooting out from all directions, mancacıs must have looked like the 'crazy' cat ladies of today. Cats also served a function in Ottoman-era Istanbul. As most houses were made of wood, cats were indispensable to keep the rats away.

Cats of Cihangir and Moda

Today, Istanbul has two cat centrals, one on the European side and the other on the Anatolian side: Cihangir and Moda. According to urban legend, seamen worldwide would keep cats to fight the rats abroad on their ships. When those ships would dock at a harbour nearby Cihangir, these foreign cats would disembark and climb up to this historic neighbourhood. While they were exploring the area, their boats would leave without them, and they would have to settle down in the city, bringing diversity to the street cats.

Today, in the bohemian Cihangir district, cats are the real boss. Gangs of multicoloured cats roam its streets and sprawl out in every possible position imaginable, to the annoyance of seagulls and crows. Cihangir even inspired a comic strip character called Bad Cat Şerafettin, a thug cat whose adventures were later made into an animated comedy.

If stray cats are a clear indicator of a neighbourhood's happiness levels, then Moda, one of the trendiest places in the city, might be the happiest place in Istanbul. From the breathtaking seaside promenade to its cozy streets, this neighbourhood seems divided between cats and dogs, who live happily side by side. But if you really want to observe street cats up in their 'natural habitat,' try taking a stroll at Maçka, Göztepe, and Fenerbahçe parks. Dominated by cats, these parks are the embodiments of Istanbulites feline obsession. 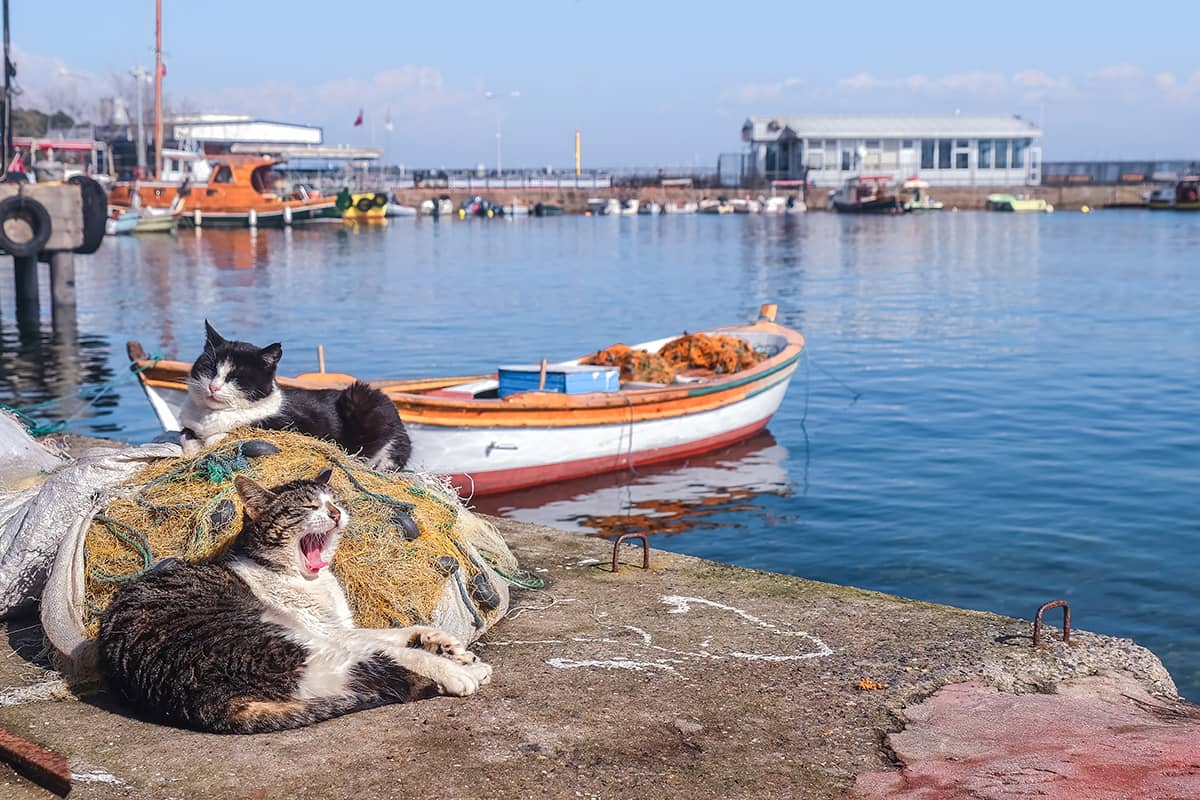 Offering endless cute selfies, Istanbul's cats have embraced the digital age too. Numerous social media accounts with tens of thousands of followers serve daily doses of the adorable cats of Istanbul. Just a glance at the hashtag #catsofistanbul might be enough to get you hooked. 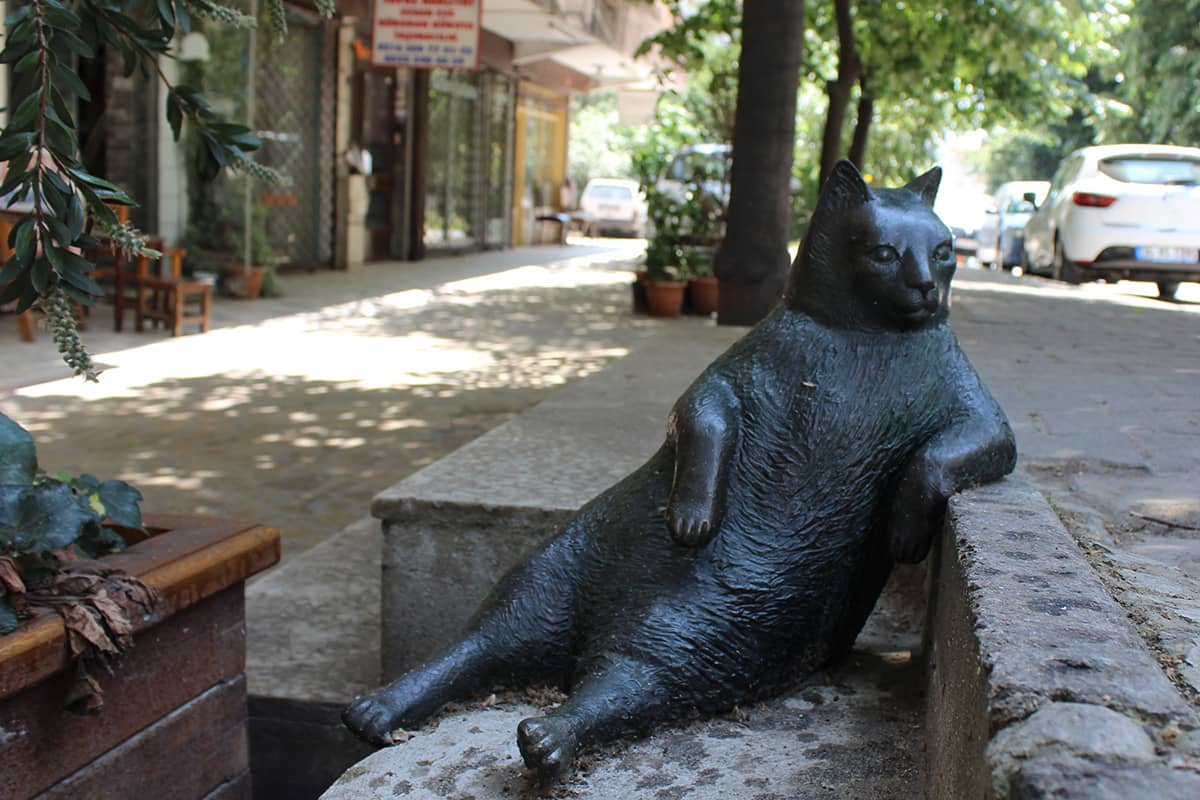 Two cats specifically gained worldwide fame. Tombili (nickname for a chubby cat) from the Kadıkoy district became an internet sensation after a photo of her reclining on the pavement started generating tons of memes. She is now memorialized with a bronze statue following an online campaign after her passing. However, Istanbul's most prominent cat is probably Gli. One of the dozens of cats born and raised at the iconic Hagia Sophia Mosque, she shot to global stardom after Barack Obama petted her. The green-eyed cat, who sadly passed away in 2020, has an Instagram account dedicated to her with thousands of followers. 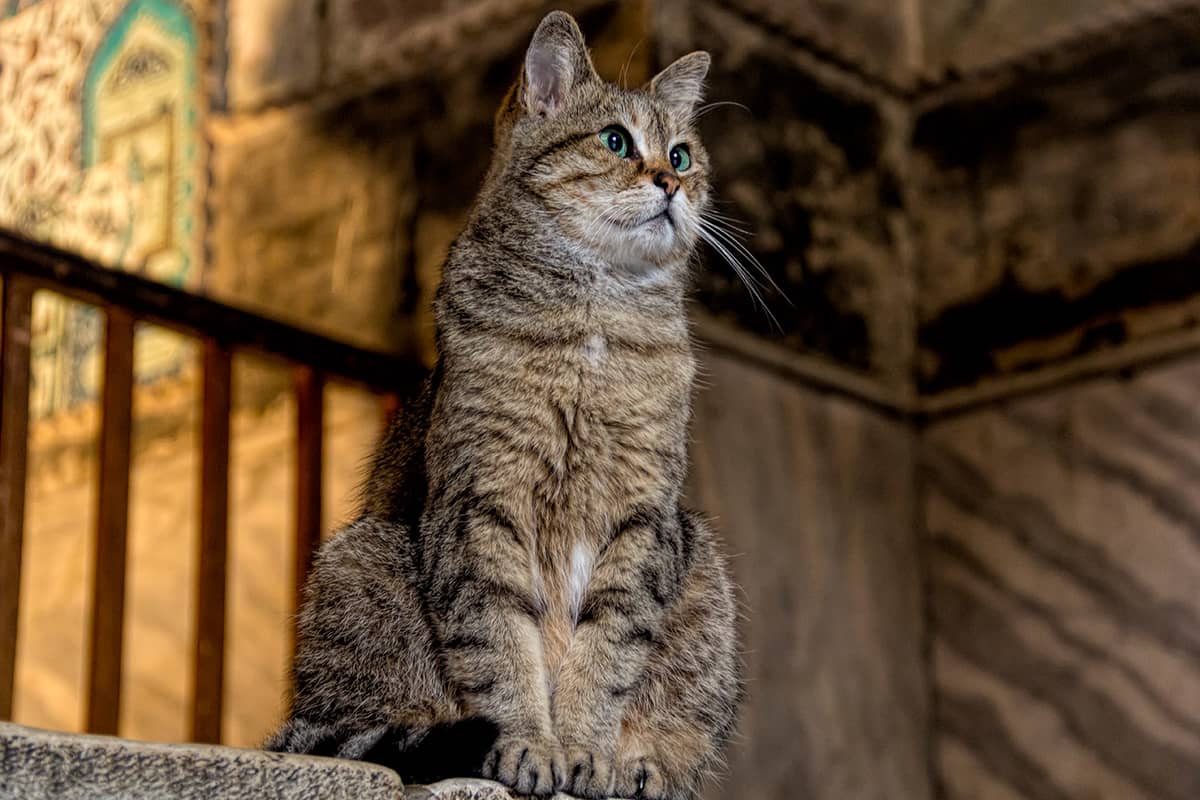 How to pet a cat in Istanbul?

There is no doubt you will meet many unique feline characters in Istanbul. So, here are a few tips on how to approach them: Try to be considerate when trying to pet a cat. Some are very friendly to humans, but some prefer to be left alone. You might try to crouch down, get on the cat's level, and slowly bring your hand to its nose for sniffing. If the reaction is positive, you might give it a pat and then some. If not, don't force it, and watch out for the swift claw! They say, in a cat's eye, all things belong to cats. Maybe it's best if you let the cat make the first move.