Golden jewelry, silver bracelets, pearl earrings, gemstone rings featuring emeralds, rubies, diamonds, and so much more... Turkish jewelry designs draw worldwide interest with their unique motifs, rich legacy, and artisan craftmanship. Türkiye's location at the crossroads of Europe and Asia, and the vast lands dominated during the Ottoman period and before, with many different cultures, have influenced the Turkish art of jewelry making. You might wonder how these influences manifest themselves in jewelry…

In this article, we’ve gathered information about Turkish jewelry design - from its history to the importance of gold and to the tradition of jewelry making. Let's take a look at the development of this special and alluring tradition. 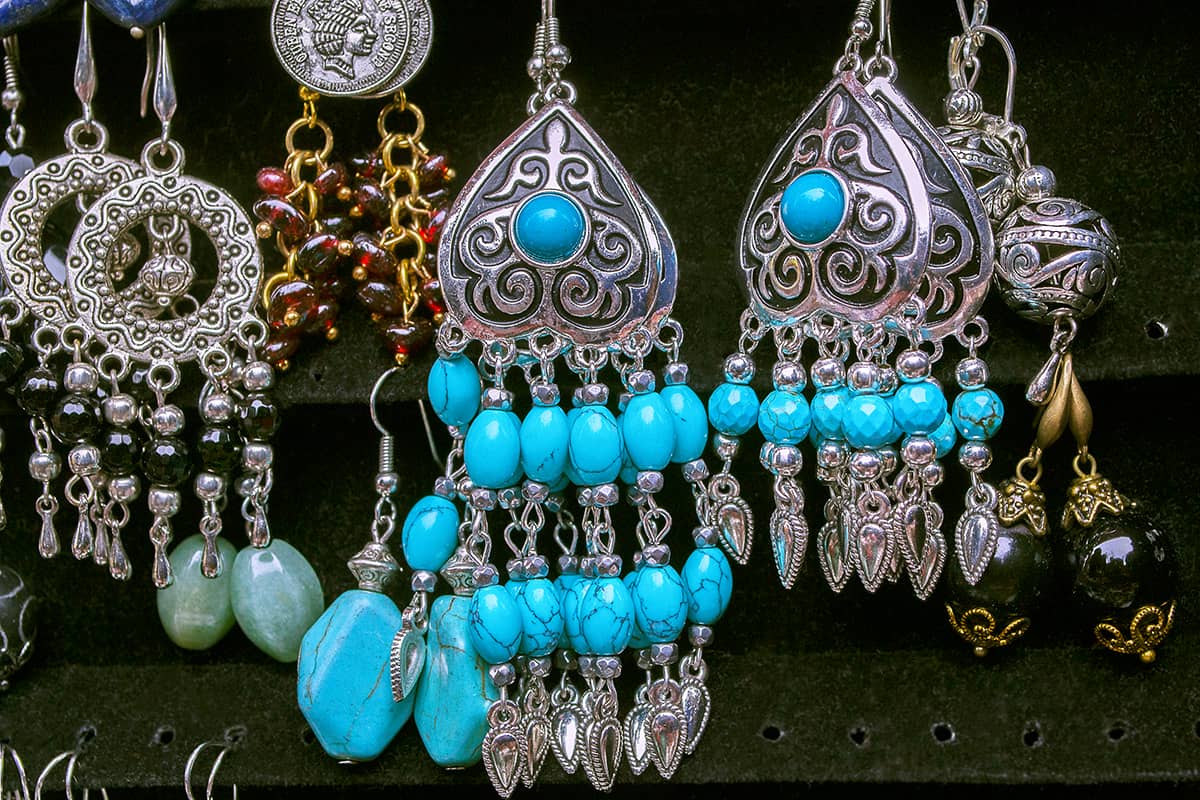 Turkish jewelry has a history as long as that of Türkiye itself. The Seljuks, as they emigrated from Central Asia, brought their jewels to Anatolia and profoundly contributed to the development of Turkish jewelry. This early jewelry shows outstanding craftsmanship which challenges contemporary technology despite the use of old techniques and tools. Precious stones like turquoise, rubies, and pearls and materials like gold, silver, and bronze were widely used in the jewelry of the Seljuk period.

Another distinctive feature of this jewelry is the reflection of pastoralist symbols related to the Seljuk nomadic culture. For this reason, there are flower-like shapes and motifs that allude to animals such as horns, tails, and birds. To this day, these original motifs stand out on pendants, rings, and bracelets used by Turkoman tribes.

At the same time, Anatolia is a key location for both Turkish jewelry and global jewelry designs. Anatolia, a fertile land which is home to many civilizations, has produced exquisite jewelry for over 5,000 years. The local civilizations have created their own jewelry styles, each with its own forms, motifs, and techniques.

According to archaeological finds, stone, bone, shell, malachite, and chalcedony, among others, were used in early jewelry. Excavations have also revealed many pieces of jewelry with copper and copper beads. Furthermore, the tradition of gold processing in Anatolia is as old as time itself. 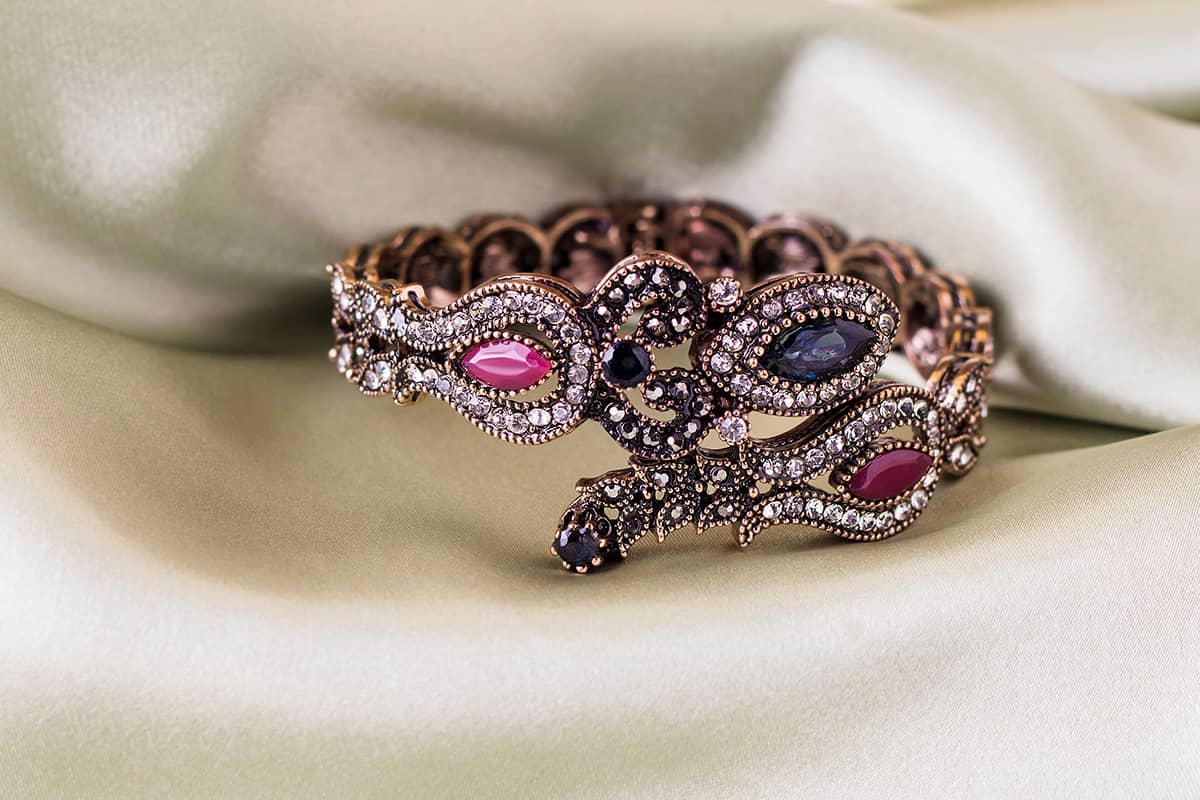 The Ottoman Empire was a notable threshold that enhanced the superb craftsmanship of Turkish jewelry designers. The masterpieces of this period are ornamented and highly colorful. Bejewelled chokers, encrusted necklaces, twisted bracelets, and signet rings were the period’s most precious pieces. Earrings also were integral to Ottoman women’s appearance - from ones shaped like pearl drops to long, dangling pieces. Jewelers used various metals when creating their pieces and gave importance to protecting the nature of the stones and metals. As a result, it is unlikely to see motifs with strict symmetry on Ottoman jewelry.

Aigrettes, symbols of power, were commonly used by the Ottoman sultans and their court. Apart from holding a place among the sultan’s principal accessories, they were also given as gifts to chosen individuals by the sultan. They were ornamented with precious gemstones, while floral or drop shapes were preferred. In addition, pins embellished with rubies, sapphires, and emeralds were favorite pieces for women's head ornaments. Common motifs included tulips, roses, violets, floral bouquets, birds, and butterflies.

Belt buckles with floral or geometric motifs decorated with diamonds, rubies, turquoise, and emeralds were also popular accessories. Ottoman women used them to embellish their appearance.

The Place Gold Is Reborn: The Grand Bazaar of İstanbul 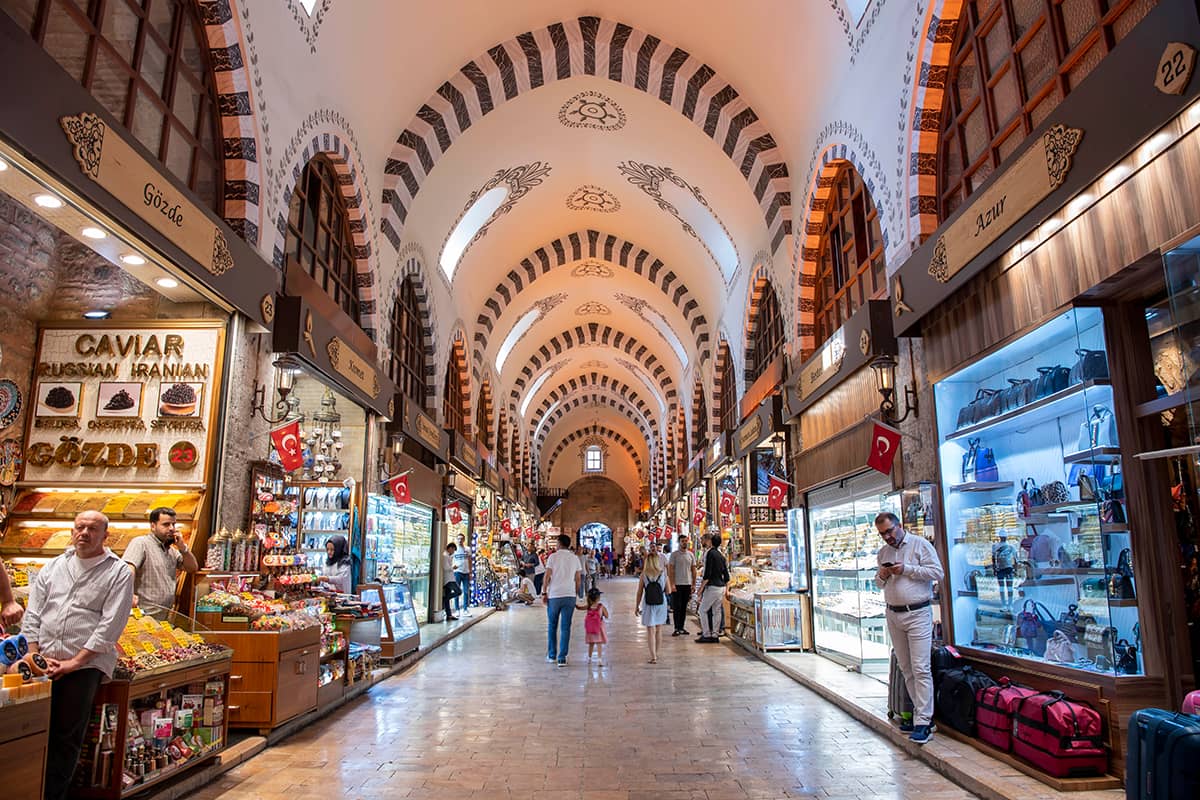 It wouldn't be wrong to say that the golden era of Turkish jewelry was the 16th century during the reign of Sultan Süleyman, known in the West as Suleiman the Magnificent. During this time, the number of precious stones available increased substantially in parallel with the expansion of the Ottoman Empire, which inevitably affected the art of jewelry as well. The clearest sign of this is the Grand Bazaar of İstanbul which was built as a prominent center of both jewelry production and trade by Sultan Süleyman in 1455.

Sultan Süleyman’s passion for jewelry is evident in the Grand Bazaar. This sophisticated bazaar was full of shops selling jewelry, gold, and precious stones. It was an extraordinary hub where goldsmiths, jewelers, and artisans met from across the world. Furthermore, many master artisans trained in ateliers here.

Becoming the center of commercial life in the Ottoman period, today, the bazaar still protects its importance in terms of the Turkish economy. The bazaar is open to visitors with many souvenir shops in addition to jewelry shops and exchange offices. With a total of 61 streets and more than 3,600 shops, it is a great attraction for both designers and shoppers.

In addition to the Grand Bazaar, the Topkapı Palace is the perfect destination to admire the most exceptional jewelry collection of the Ottoman period. The palace was the principal residence and administrative headquarters of the Ottoman Empire after the conquest of Constantinople in 1453. It is also known that approximately 90 craftsmen, 60 goldsmiths, and 30 jewelers worked at the Topkapı Palace during the reign of Sultan Süleyman.

Click here to learn the best places for shopping in İstanbul!

The Importance of Gold Jewelry 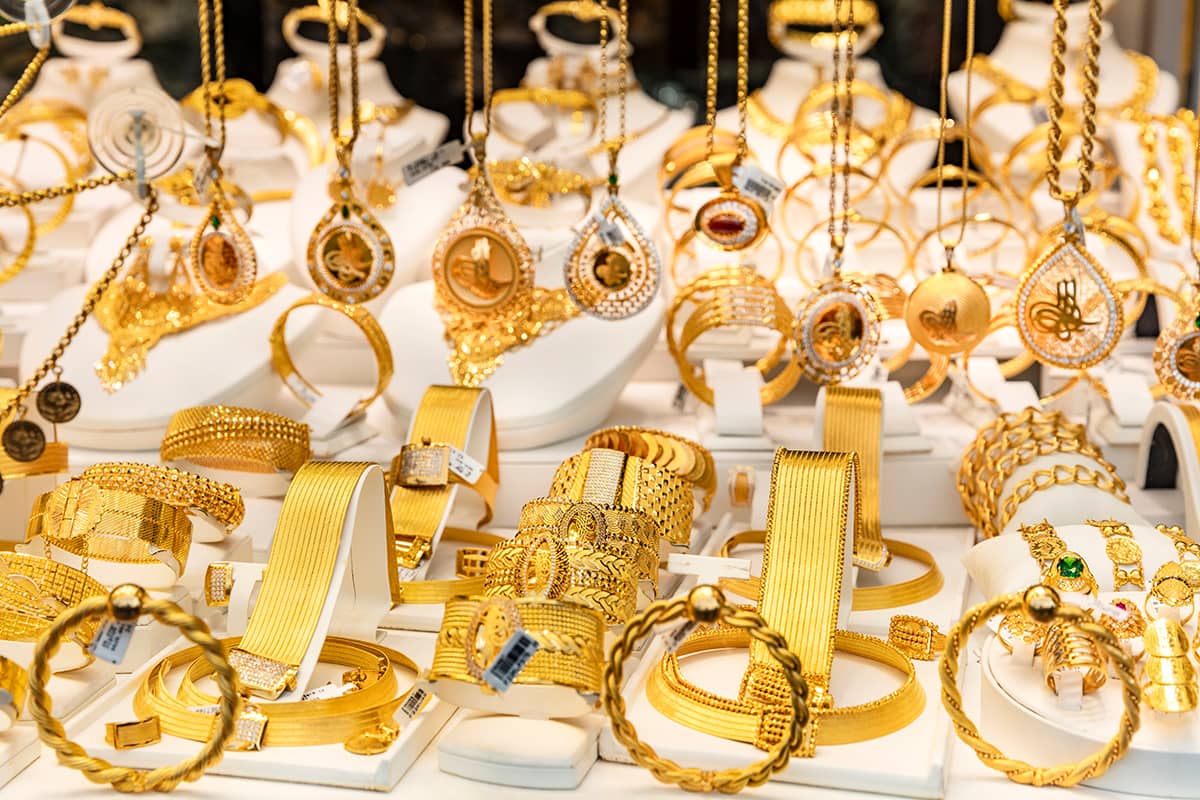 Although gold jewelry making is a rooted tradition that can be found throughout Turkish history, the use of gold reached its peak in the reign of Sultan Süleyman in the 16th century. When gold is handed over to the skilled hands of a passionate and highly skilled workforce, it turns into unique, awe-inspring jewelry. Türkiye has protected its reputation and status in gold jewelry production and today plays a central role in the world gold market. 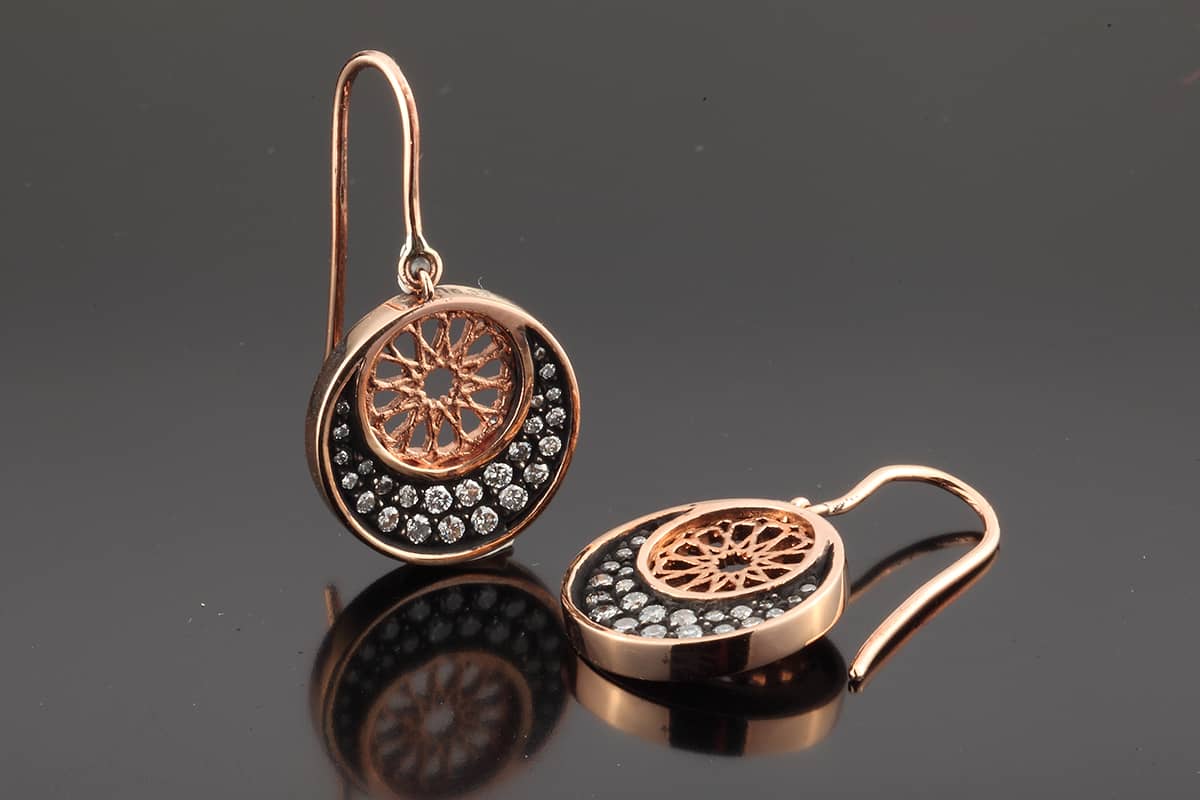 The rich heritage of superb craftsmanship continues to fuel and inspire contemporary designs. Today, in Türkiye, you can find many striking pieces which blend the traditional art of jewelry making with modern touches.

Currently, minimal designs stand out, and precious stones like diamonds and emeralds are used in combination with gold and silver, which are traditional jewelry making materials. Unique designs turn into original jewelry with the use of new, high-technology techniques.

Alongside many precious stones in Turkish jewelry, many gemstones such as rubies, emeralds sapphires, turquoise, chalcedony, tiger’s eye, and agate are also used.

Click here for more information about other designs in Türkiye!