10 Turkish Towns That Lure With Their Ottoman Architecture

Architecture and the space it occupies reflect the mindset of time; it provides us a narrative by which we can glimpse into past ways of living, understand aesthetic and functional concerns, and learn about traditions and values. In this respect, they can manifest a panorama for a culture where the very body of the constructed material can incorporate a way to preserve and share temporal norms, acting as a museological source.

Here then, we are to present you with unique examples from the Ottoman times that have endured the depredation of time and managed in bringing past to present and communicated us with an invaluable message so that we can go and learn, experience, and enjoy. 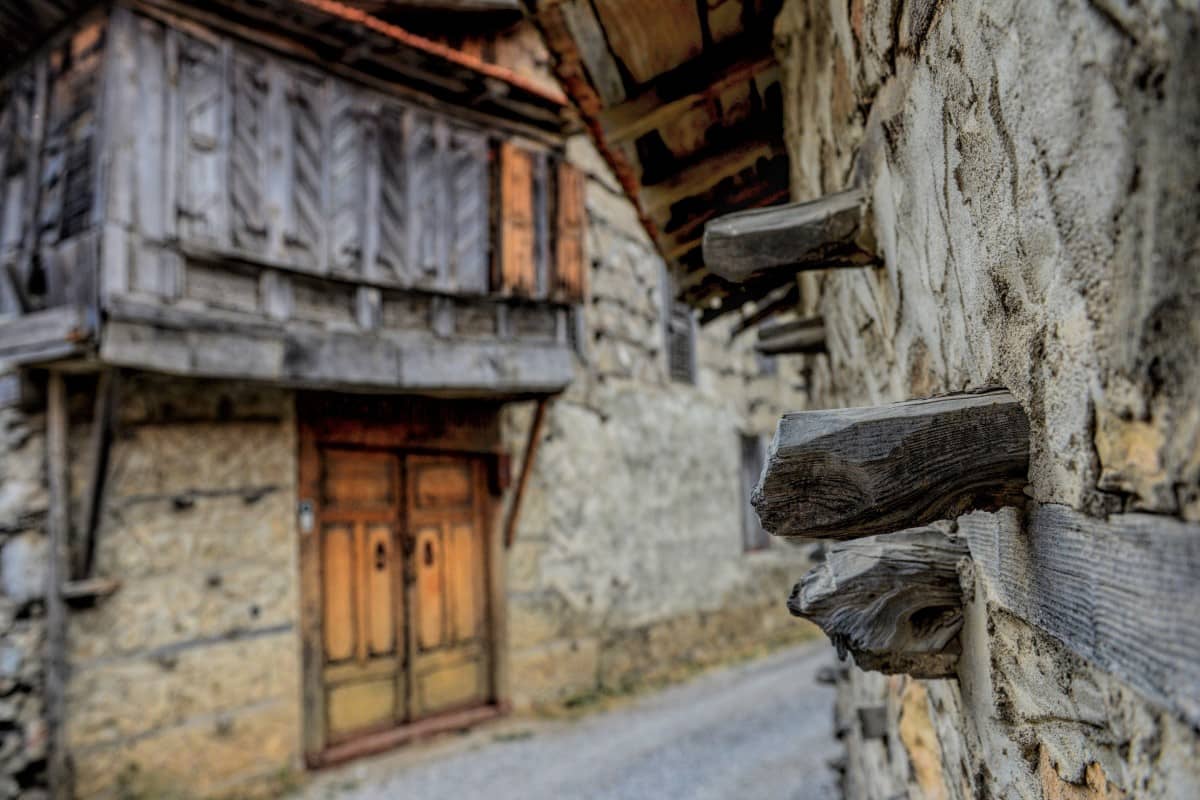 Our first stop is not a single location but a distance covered by the İbradı-Akseki districts of Antalya. The region used to be one of the ancient passes for the Silk Road, and it still harbours traces from that period. Situated on the plains of the Taurus, the traveller here will find delightful sceneries of nature, including plateaus, wild horses running free, and geographical formations such as Altınbeşik cave. 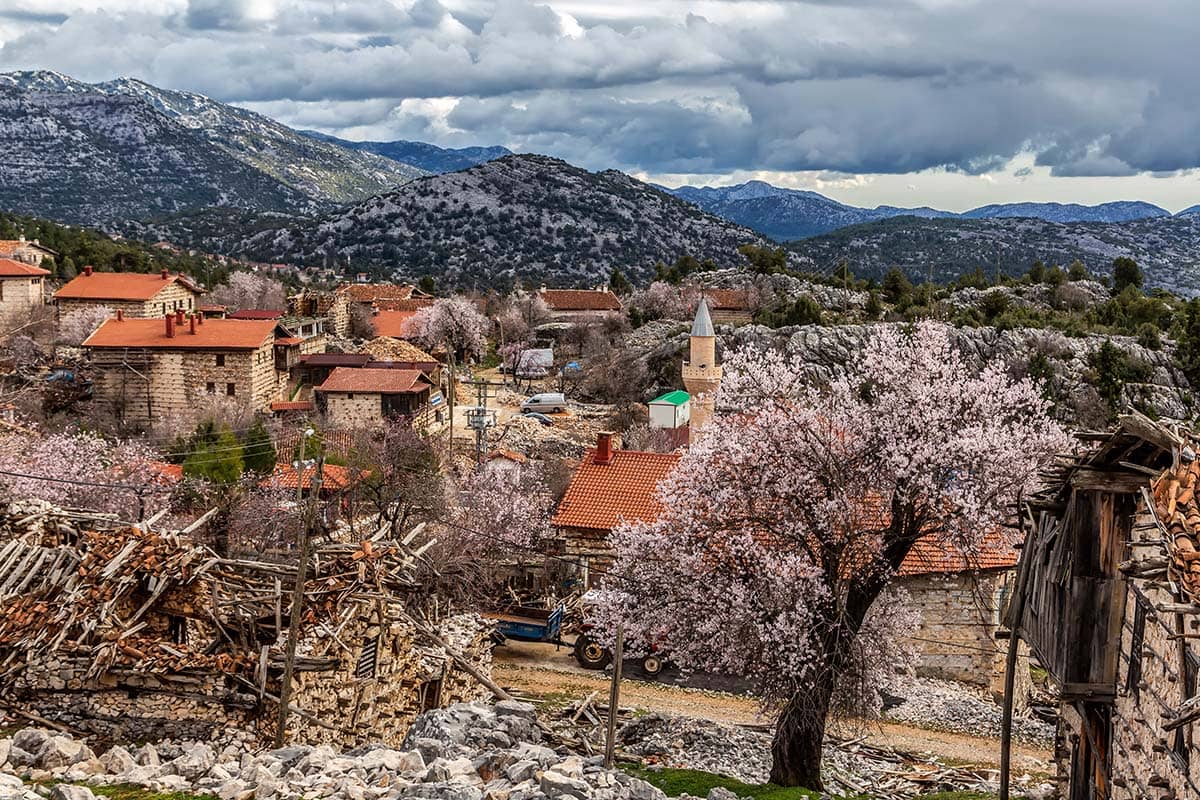 The houses of Akseki and İbradı are unique in that they are constructed on a bond beam structure where binder materials such as cement or grout are not used, rather stones are supported by these beams. Due to their wooden pointy ends observable even from outside, the locals have come to call them “buttoned houses”, düğmeli evler. 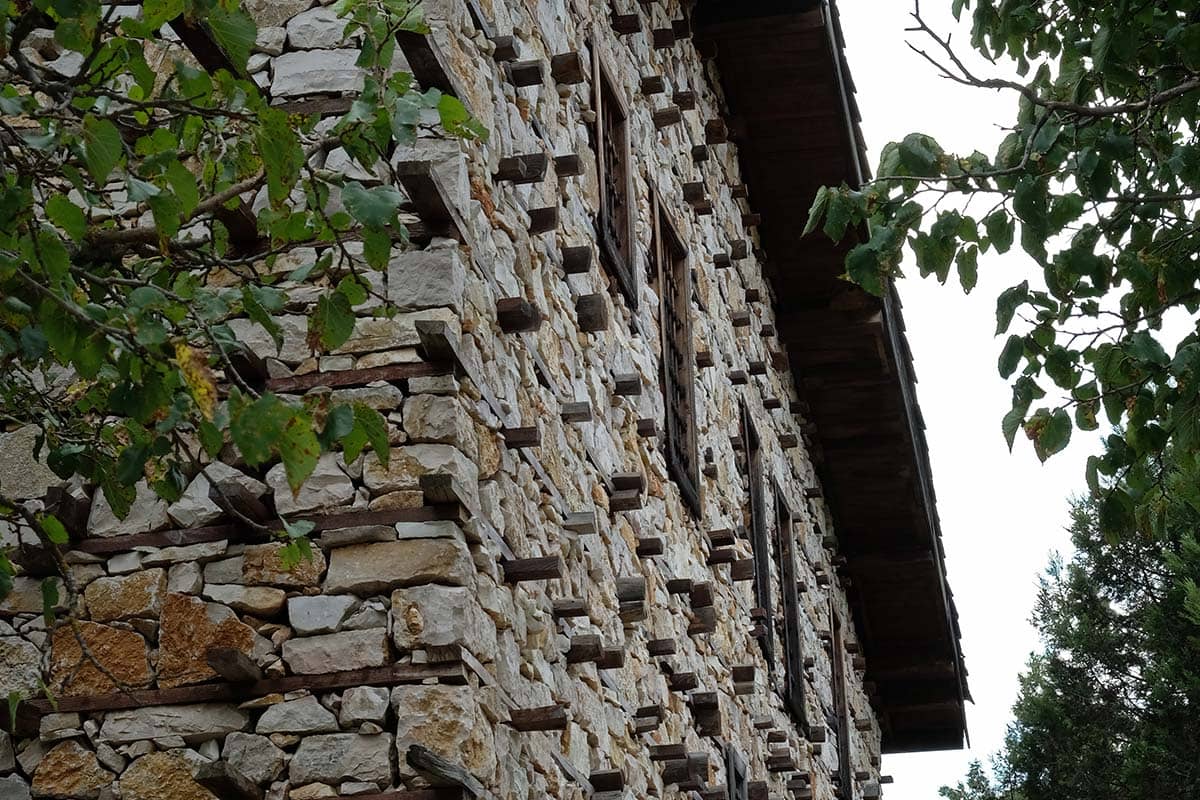 Akseki and İbradı are only 26 km apart from each other. Here, the most remarkable examples of these houses can be found in Sarıhacılar village in Akseki, Ormana and Ürünlü villages in İbradı; further, some of these houses are open for accommodation, and if you go around in August, you can join the Grape Festival that has been held in the Ormana village for half a century!

Antalya is one of those cities that manages to blend so many experiences in one scene, to discover more, click here! 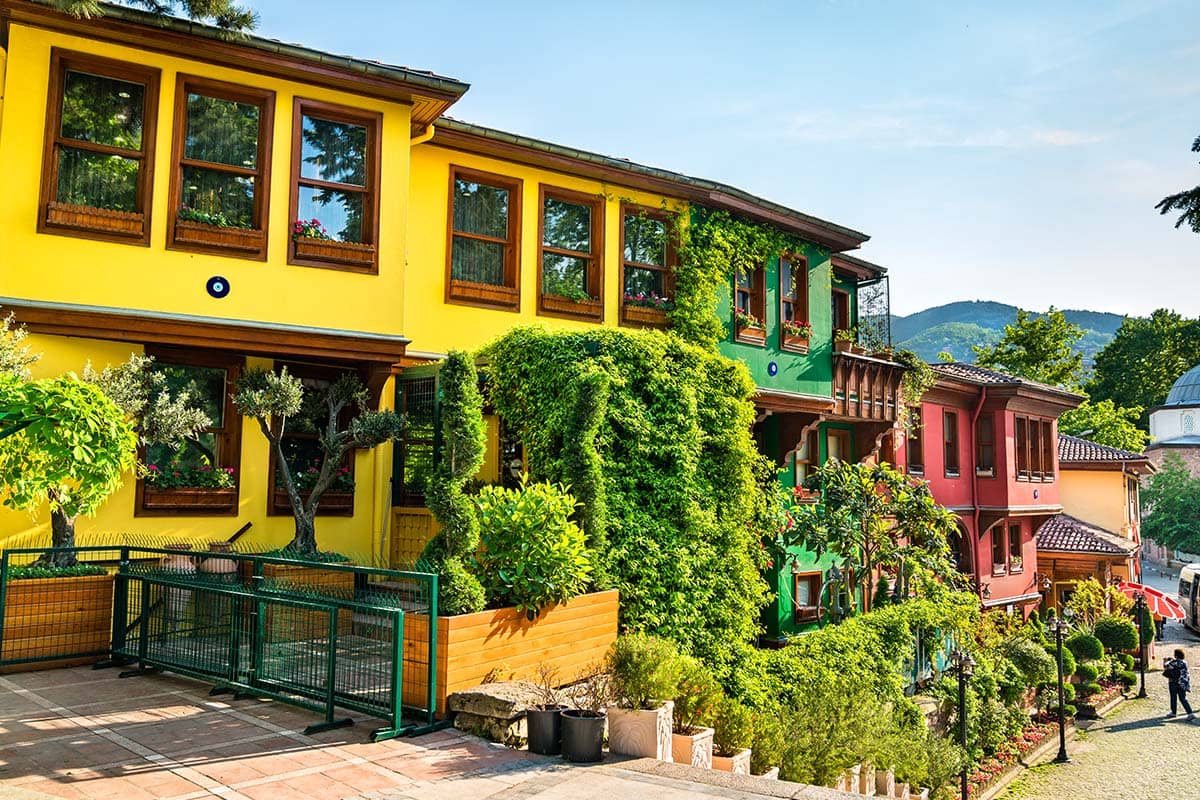 Cumalıkızık is one of the first places where the Ottomans have settled in Bursa, their first capital. Therefore, the houses of Cumalıkızık are some 700 years old! There is a total of 270 houses that date to the first periods of the Ottomans, and 180 of them are still in use while the rest is under conservation and being renovated. 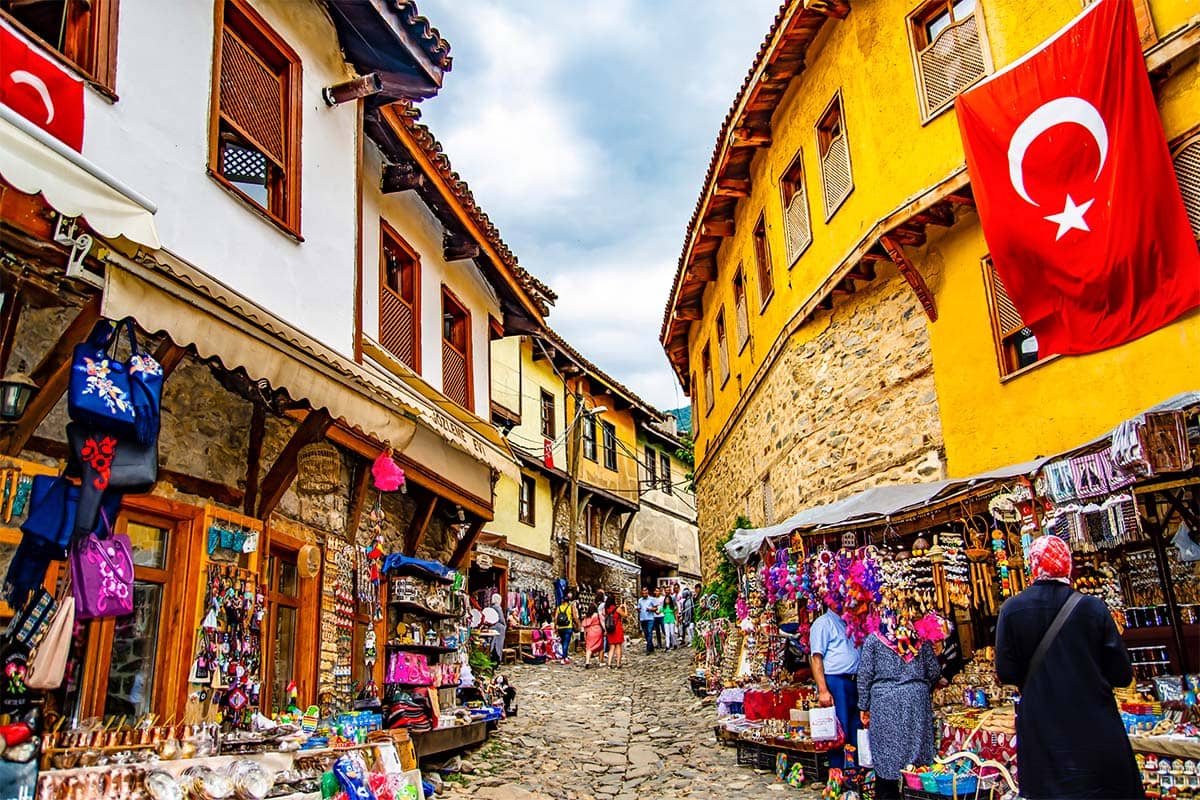 As Cumalıkızık is a town almost untouched, you can observe the space it provides to be a venue for old market interactions and traditions. Having a deeply-rooted history, the town has been recognized in the UNESCO’s World Heritage list in 2014. 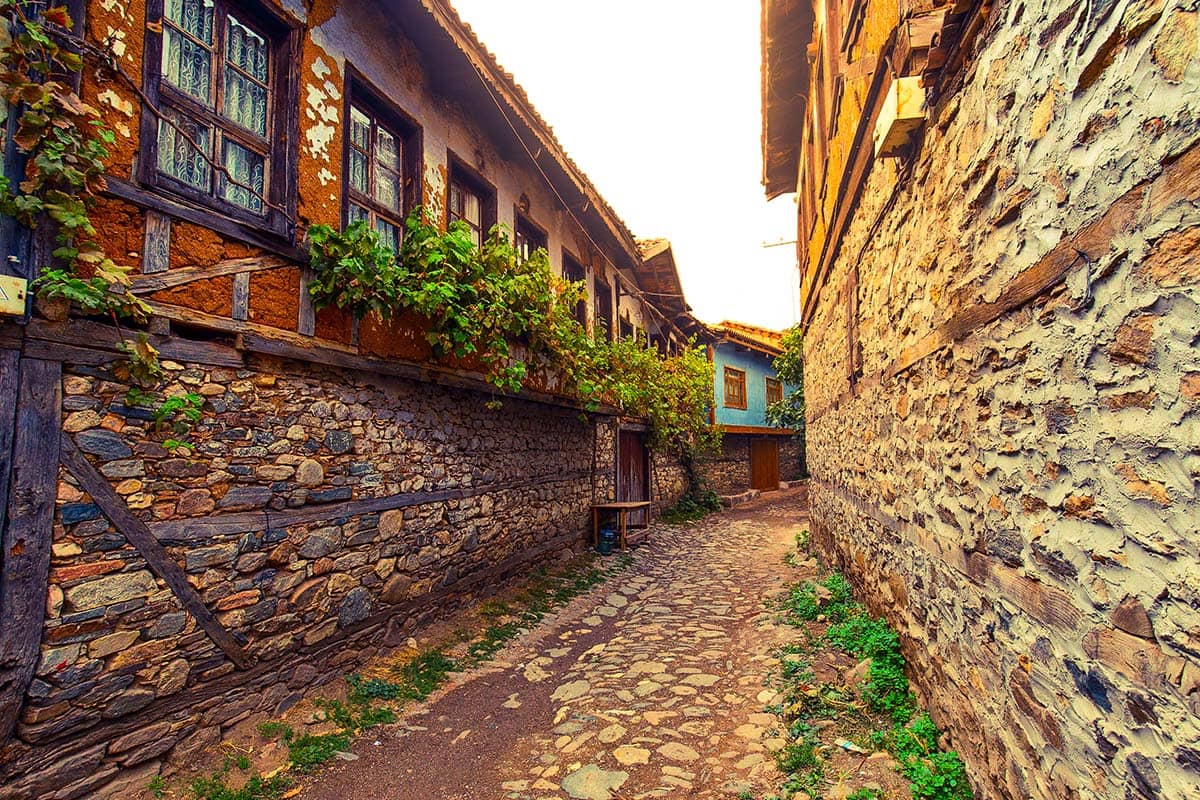 If you wish to take a journey where you glimpse into the civil lives at the dawn of one of the mightiest empires of the past, you should come and see this sight.

If you want to learn more about this cultural capital, you can click here! 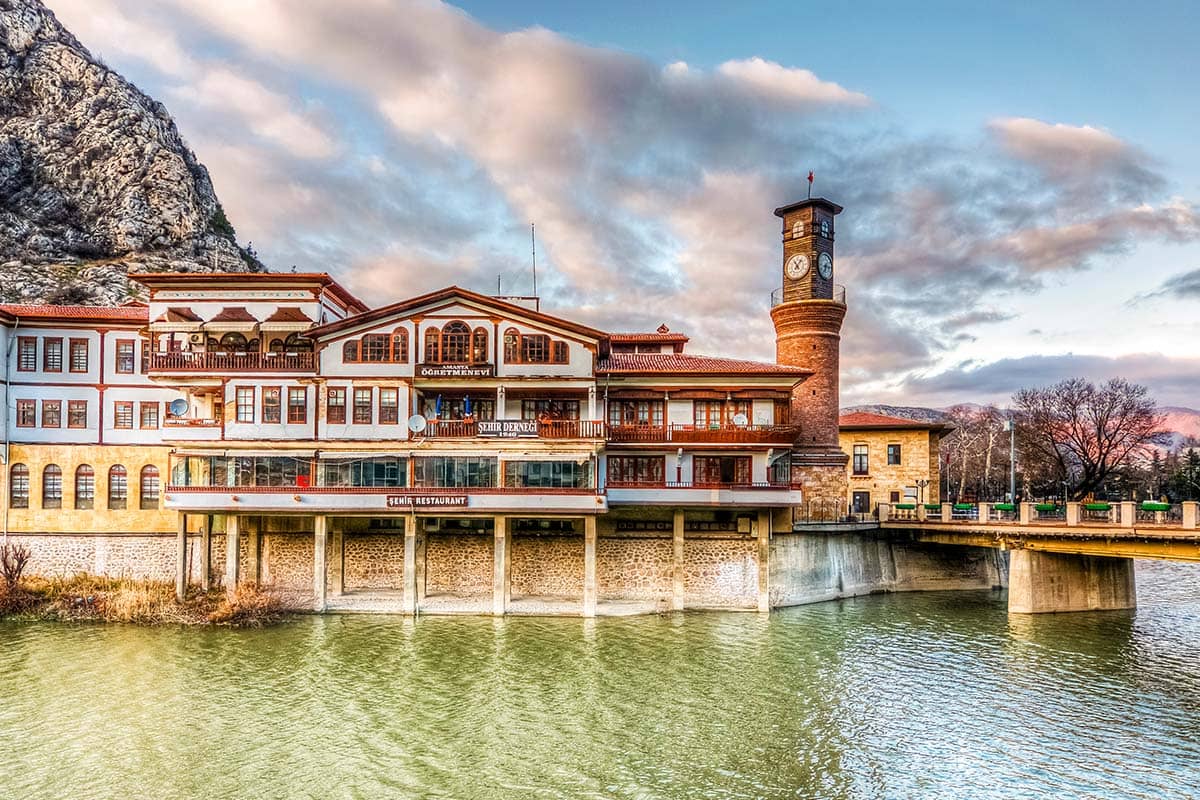 Amasya’s Yalıboyu houses, elegant examples from the Late Ottoman Era, can best be visited at the Yeşilırmak riverfront of Hazeranlar street, Hatuniye neighbourhood in Amasya city centre. Houses here are usually attached, and the interior design is made to divide the apartments as haremlik and selamlık, respectively, partitions for women and men. As the houses are made mostly of wood, some houses have an inner pool as a measure for fire breakouts. These houses usually have a courtyard and a garden; and as characteristic of Turkish houses, the second floor has a cumba, a jetting, which enables for a larger space.

When you come to Amasya, these river-front houses will delight you with their beauties, and of course, there are accommodation options as well!

Amasya is located in a unique landscape, offering great insight into the past and provides an idiosyncratic lushness, you can learn more by clicking here. 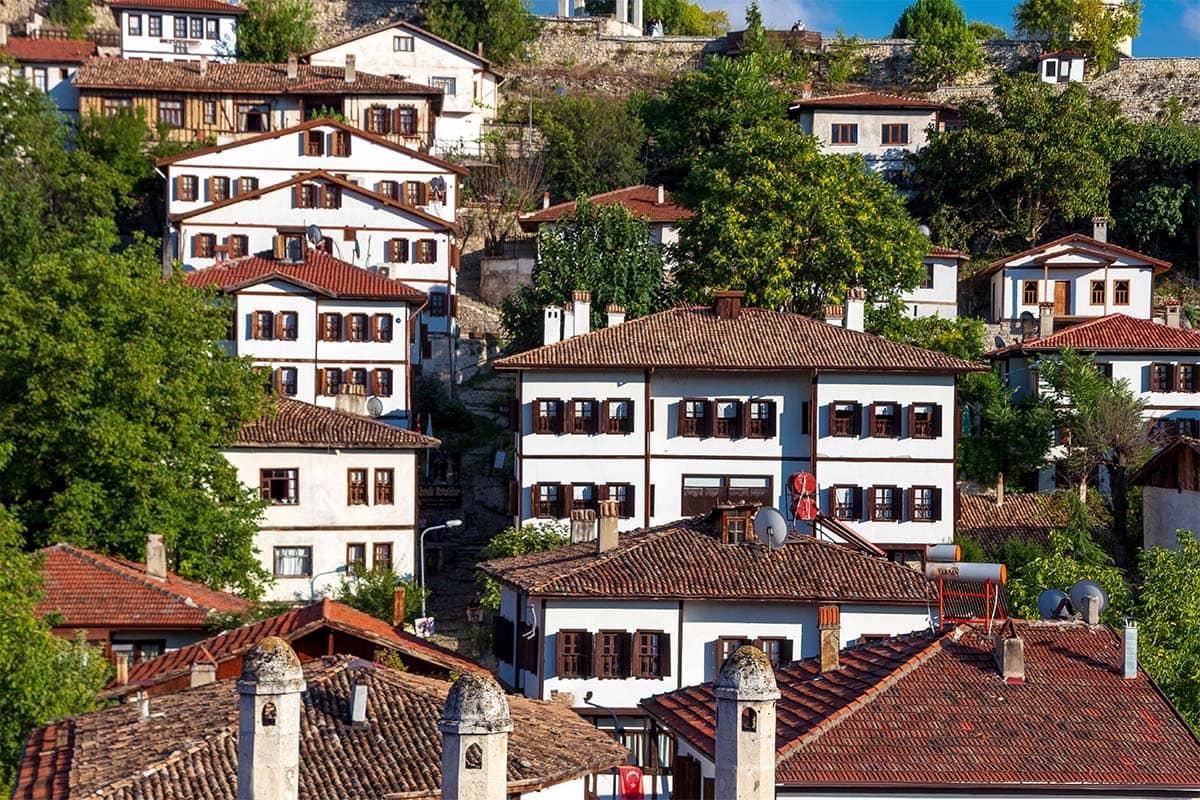 Having perfected their ultimate forms between the 17th and 18th centuries, there are currently 2000 traditional Turkish houses in Safranbolu, 800 of which are legally protected. Different from the Amasya houses in respect to their solitary, unattached construction, they were built with the concern of not preventing other houses from receiving an equal amount of sunlight. 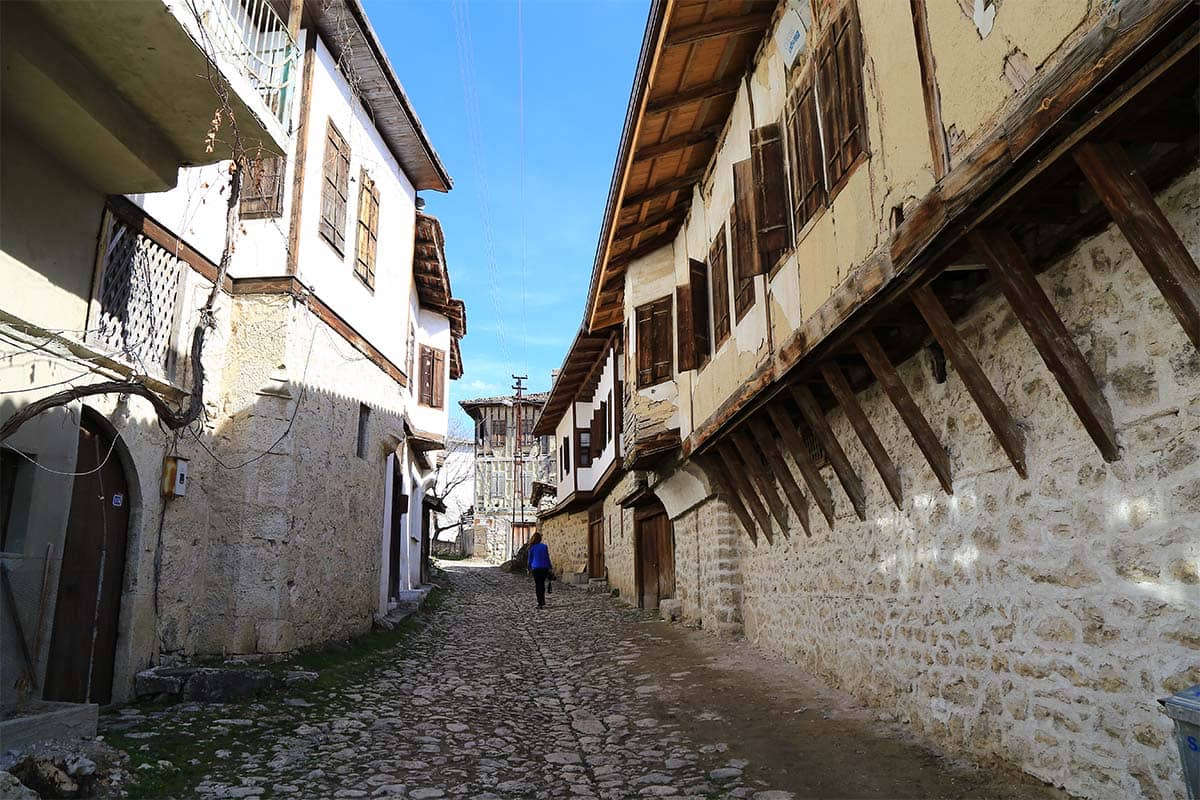 And similar to them, some of the houses here also have inner pools situated to protect against fire. With its cobblestone streets, gorgeous architectural finesse, and the urban space of which still retains some of the traditional ways of living, Safranbolu is surely a traveller’s delight!

Not just an important cultural location, but also a city teeming with verdure; you can visit our website to learn more about Karabük. 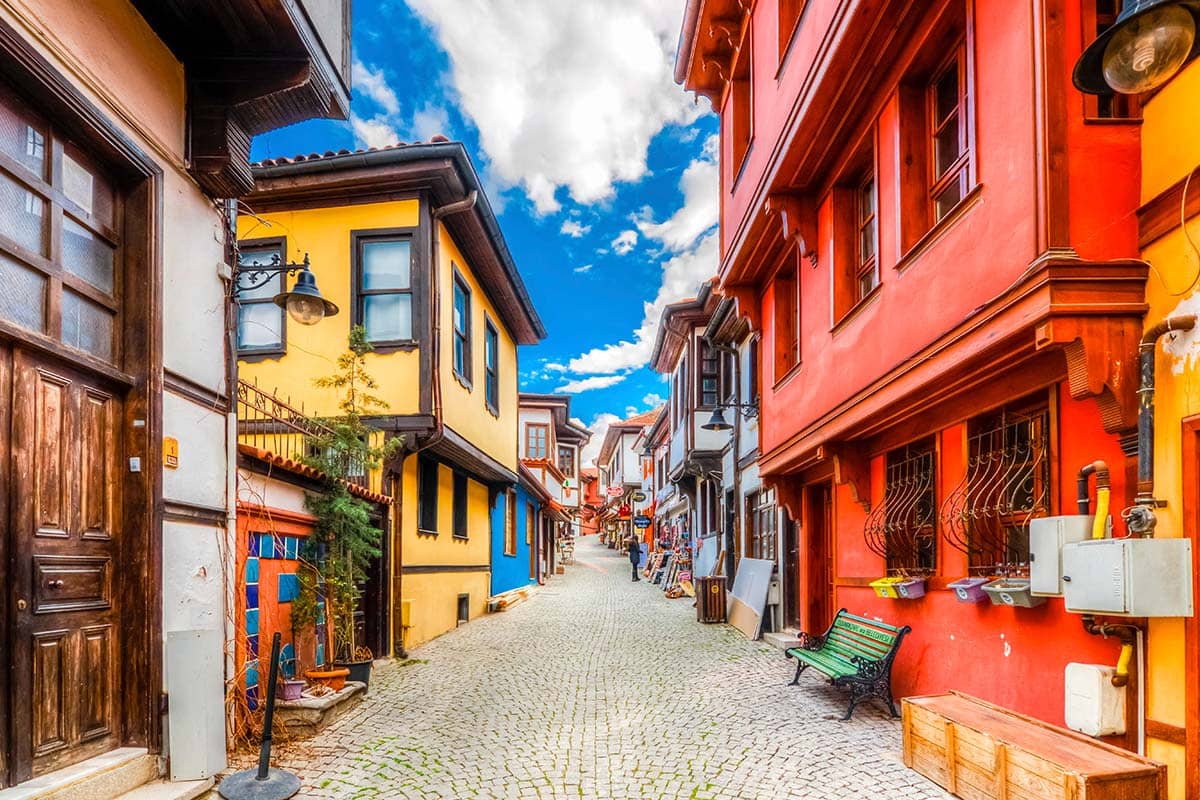 Similar in allure and their attached built style to Amasya houses, but much more colourfully painted, Odunpazarı is located on the southern hills of Eskişehir. As the quarter preserves one of the most beloved examples of traditional Turkish Anatolian architecture, having a circuitous street, harmoniously blended white walls and brown beams with some sprinkle of other pastel colours here and there, and fabric of a total city space with its traditional housing, mosques, complex, caravansaries, fountains and old lodgings it has been both nationally and internationally protected; respectively, both as a “Historical and Urban Site” and as a UNESCO World Heritage Site. 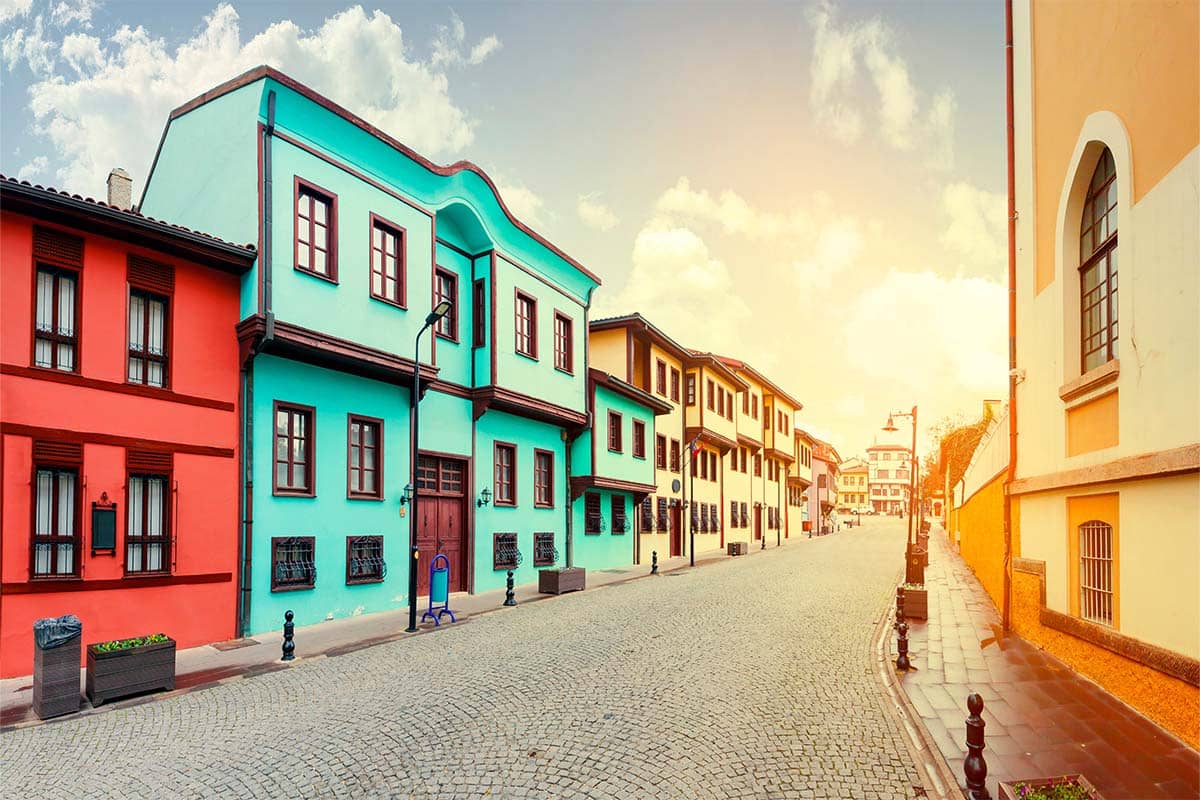 Odunpazarı will certainly make you feel as though wandering at a scene only found in movie sets!

To discover more about Eskişehir, you can click here! 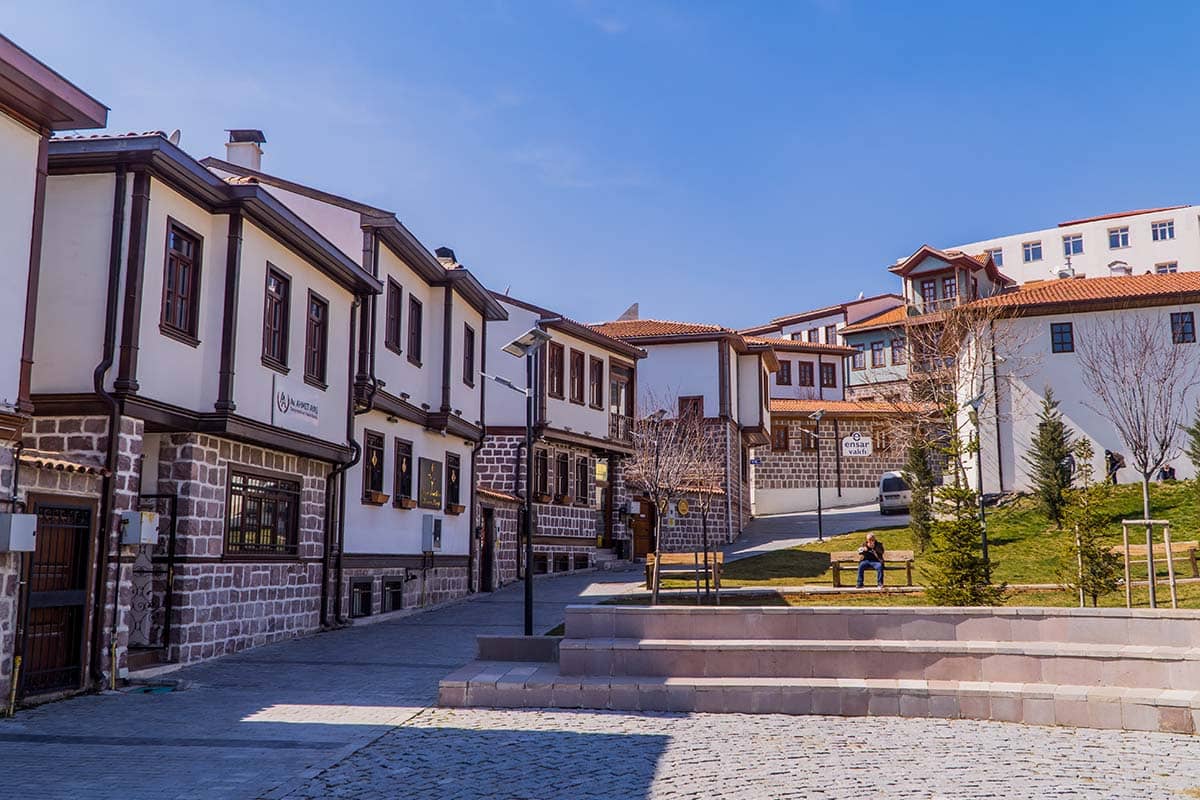 Hamamönü is an old historical quarter in the district of Altındağ in Ankara. The houses we are to walk about here are all examples of the Turkish civil architecture of the 19th century, and they share the spirit of Amasya and Odunpazarı. 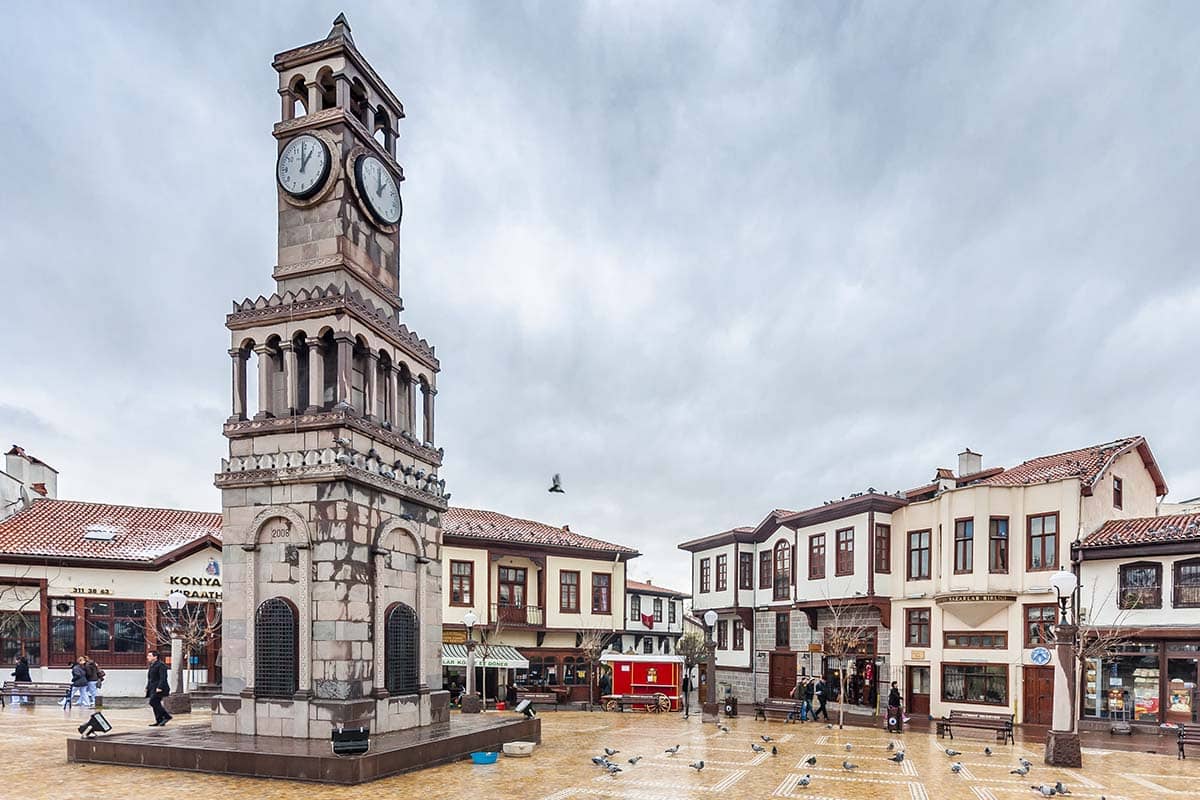 Also, did you know that the poet who wrote the Turkish National Anthem, Mehmet Akif Ersoy, was writing the poem here, in the park named after him? You can also visit his house in Hamamönü! 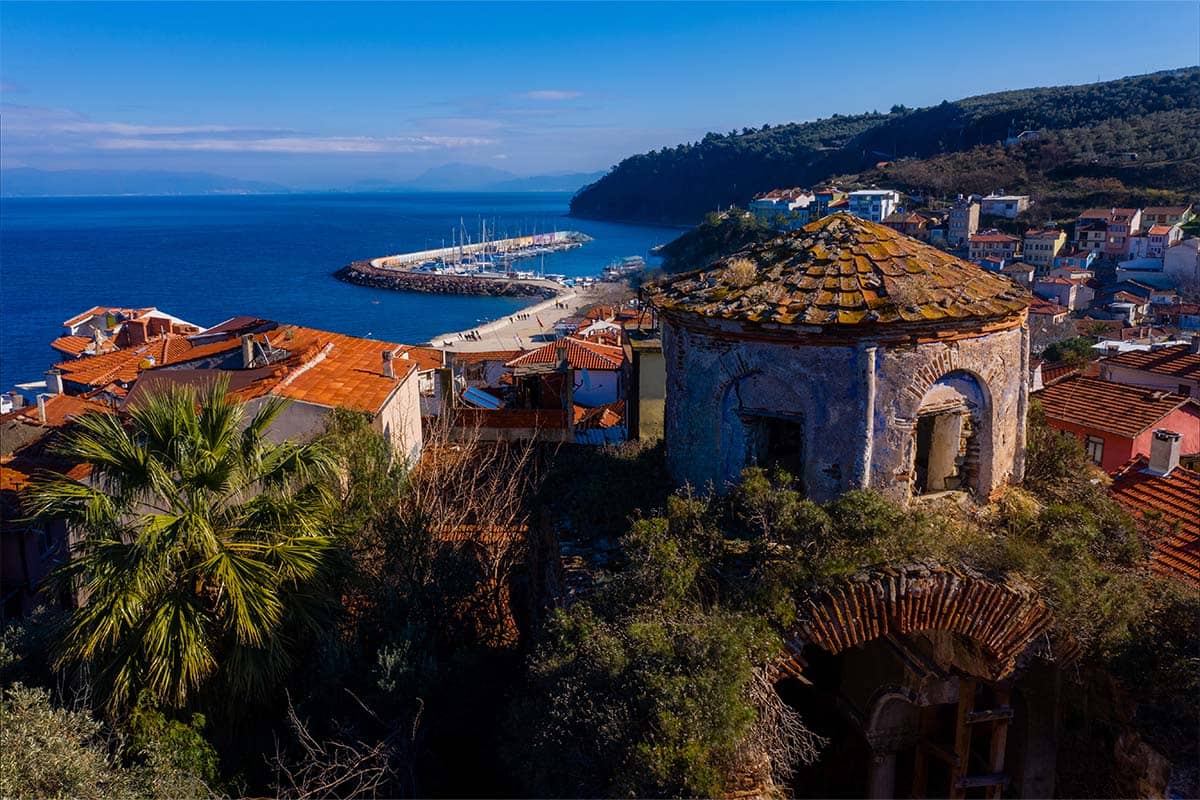 Situated on each slope of a valley, encircled by olive groves on its inland, and with gorgeous hues of Marmara blue on the other, Trilye is an ancient Rûmian town that prospered during the Ottoman times. The town still continues its characteristic olive cultivation, vintage, sericulture activities; and manifests great examples from Eastern Roman architecture. With its lush scenery, historical monuments, and a deep-seated culture, the town awaits its visitors! 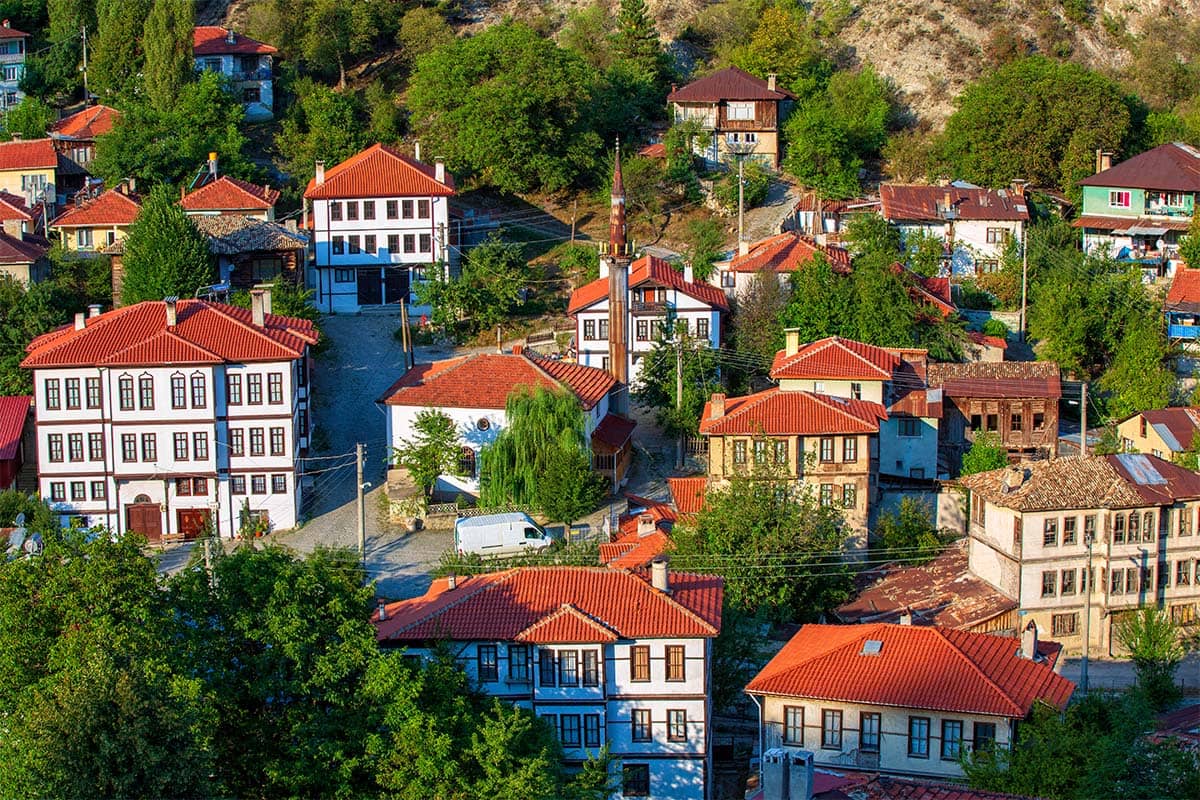 Mudurnu is an important site that preserves the noteworthy examples of Turkish civil architecture; therefore, as with other sights, it has also been designated as a “Protected Urban Site” under national law. Situated on a hill slope, houses in Mudurnu are taller than usual. In the district, there are over 100 structures -housing units, mosques, fountains and hammams- registered according to the law on conservation, and they also give us wonderful glimpses into life in Ottoman times.

There is much more in Bolu! Let’s review what you can do here when you visit, click! 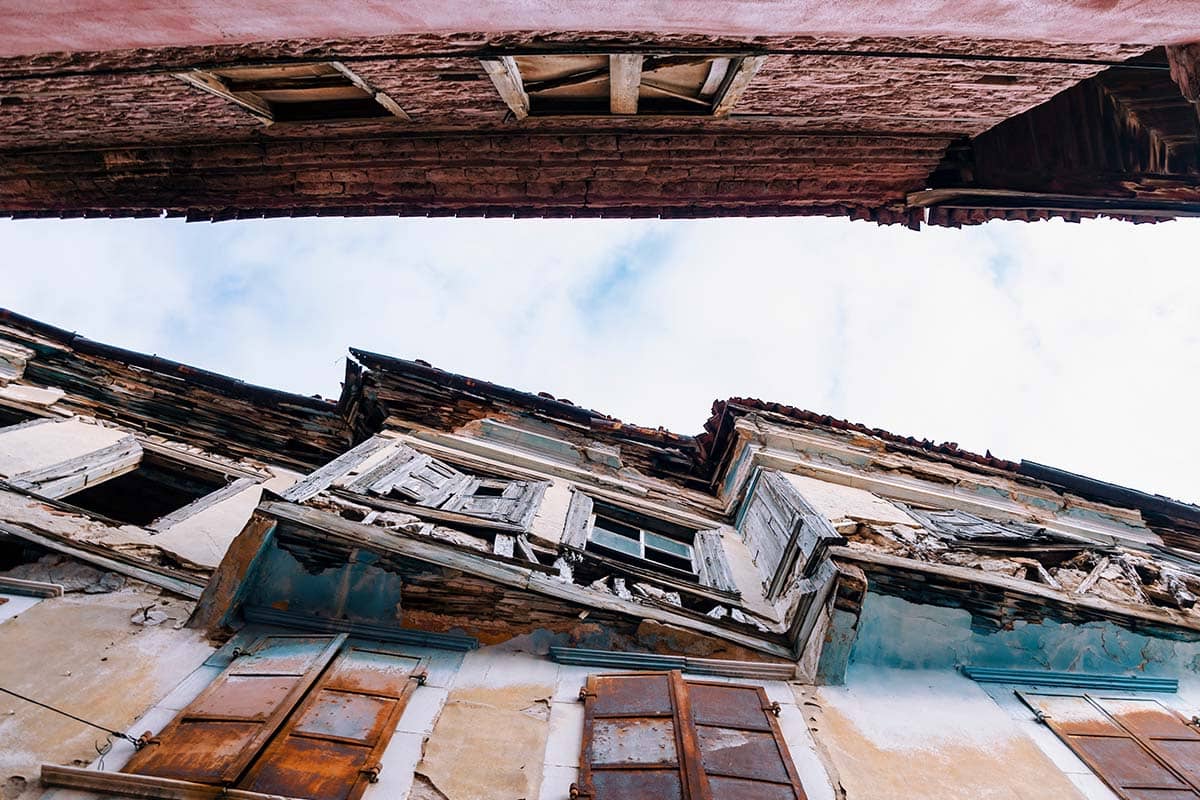 Kula houses are another representation of 19th century Turkish architecture, and their design pervades the whole scene. All these houses have their own courtyards, enclosed by a wall, and windows of the living room that oversee the courtyard are occasionally uncovered, whereas the ones that have a street view are giving us a perspective on the decorum of Ottoman private and public divisions of life reflected onto the design.

Manisa’s role in the Ottoman past is not limited to the 19th century; you can learn more about the city by clicking here. 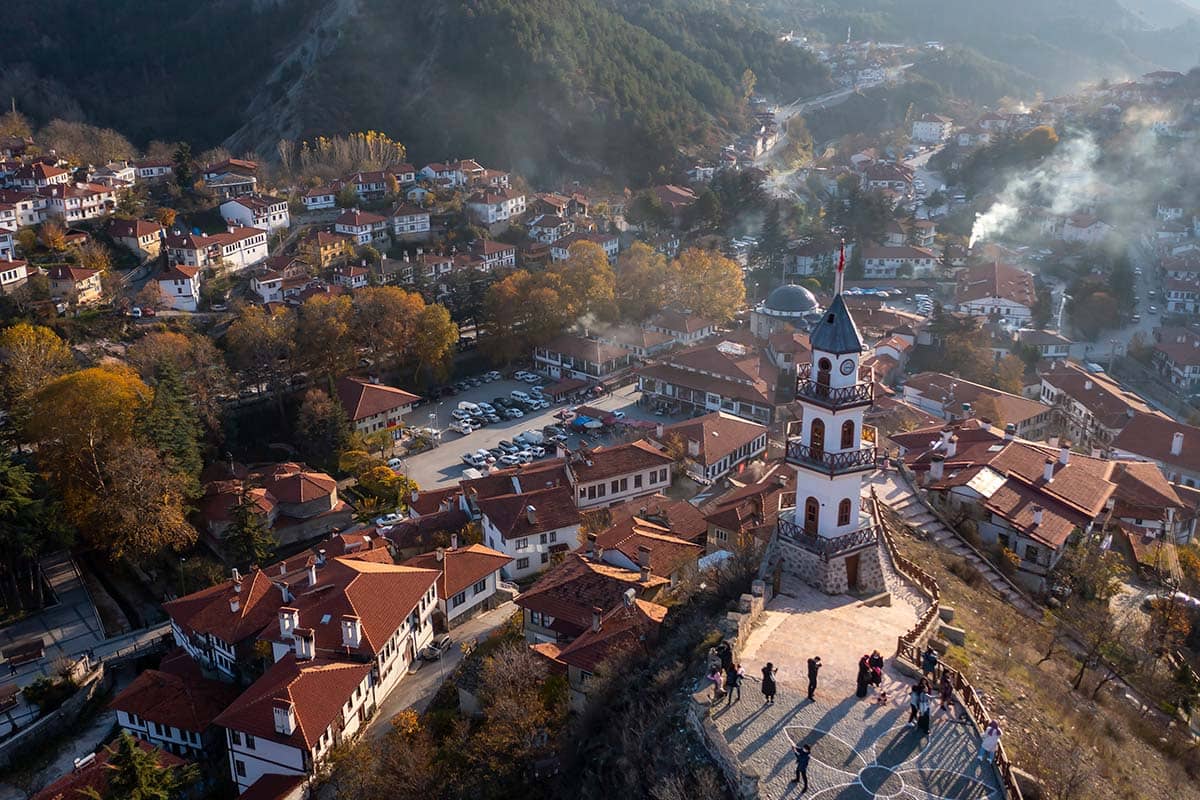 Just like Mudurnu, Göynük is also designated as a Protected Urban Site, whereas its houses mostly date back to the 20th century. Also, in 2017, Göynük was included in the Cittaslow cities. Surrounded by splendid scenery, the time you will spend in Göynük will surely refresh your mind and take away all the stress.

To walk with the tranquil pace of life in these history-and-culture-rich towns and to be immersed in their atmosphere is like a gift for any visitor. Their doors are wide open, and they are all ready to make you feel at home in your journey into the past, what are you waiting for?