The Talented Hands of the TurkAegean: The Artisan Towns of İzmir

The TurkAegean province of İzmir is famous for its many authentic Turkish handicrafts. From traditional Turkish quilting to the wearable art of felting there’s an ongoing centuries-old production of artifacts in the TurkAegean which are sure to appeal to your heart and eye. With their vibrant colors and meaningful designs, local handicrafts stand out as the beautiful products of years of diligent practice and hard work. 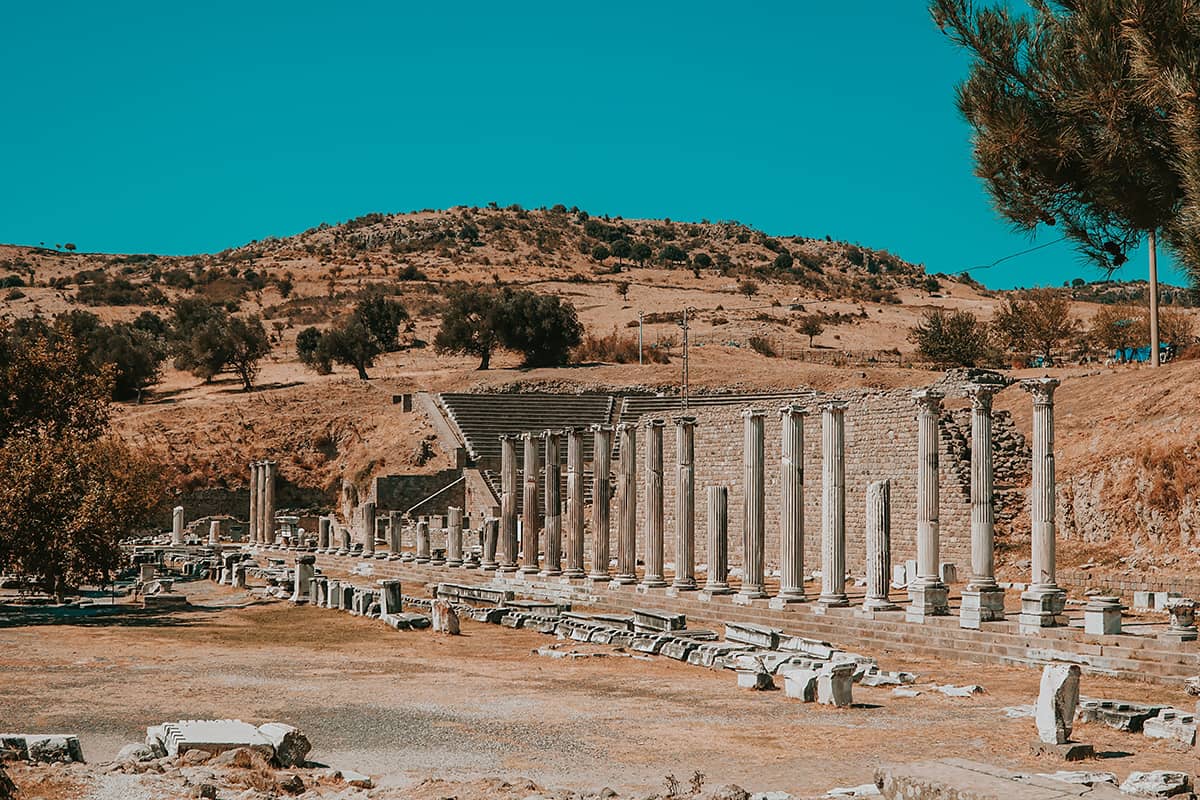 The city of Bergama, in İzmir Province, lies nearby its famed predecessor, the ancient city of Pergamon. The settlement of this region is believed to have begun in the 5th century BCE, while the region gained significance in the Hellenistic period, and especially in the 320s B.C.E. The remains of the ancient city, including an acropolis, can be found on a lofty hill northwest of the today’s Bergama whereas the Roman ruins lie under the modern city.

Bergama’s cultural heritage is incredibly rich as can be expected from a city with an extremely multilayered cultural landscape, shaped by various civilizations such as the ancient Greeks, Romans, Byzantines, Ottomans, and Turks.

From quilting to embroidery and weaving, the region is famed for its handicrafts. Let’s take a look at Bergama’s oriental rugs which are held in the highest esteem – so much so that even the famous 14th century Venetian traveler Marco Polo commented on them.

For more on the TurkAegean’s many historical sites, click here. 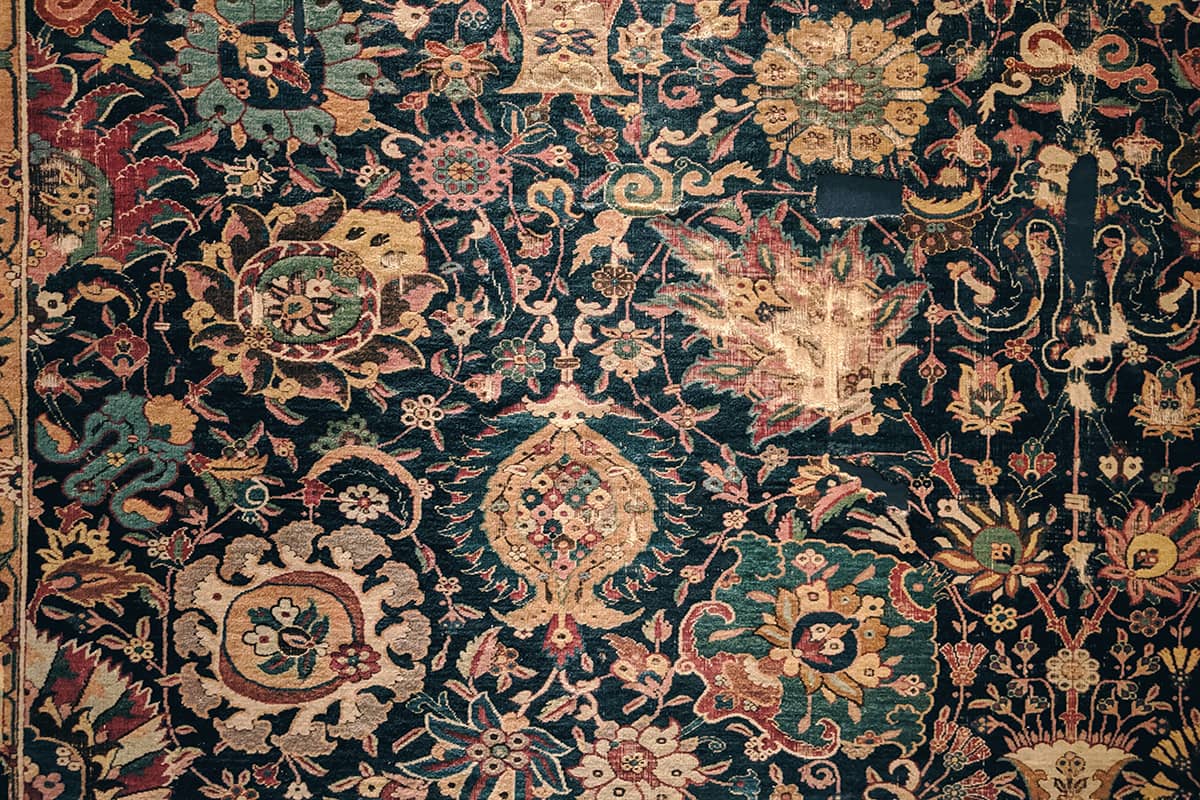 The carpets and kilims of Bergama are among its famous tangible heritage, and have a long tradition and distinguished history. From the 11th century onwards, this tradition has been passed down from one generation to the next through the master-apprentice relationship and family bonds, and was especially popularized during the Ottoman period when the Ottoman sultan commissioned a series with special designs.

Throughout history to the present day, Bergama has been one of Anatolia’s most famous centers of carpet production. With the passage of time, local carpets and kilims have come to feature an array of symbols which reflect the town’s extensive history and multiculturalism. Every carpet woven here is unique, displaying a style, colors, and symbols that are to be found nowhere else. A common element of all, however, is their distinctive red-colored weft.

In the history of Bergama carpets, a tradition arose that sees stories from Anatolia weaved into the carpets and kilims. From the warp to the knot and from each knot to the motif, every little detail resembles a book chapter. Isn’t this a fascinating and inventive way to express feelings and events? 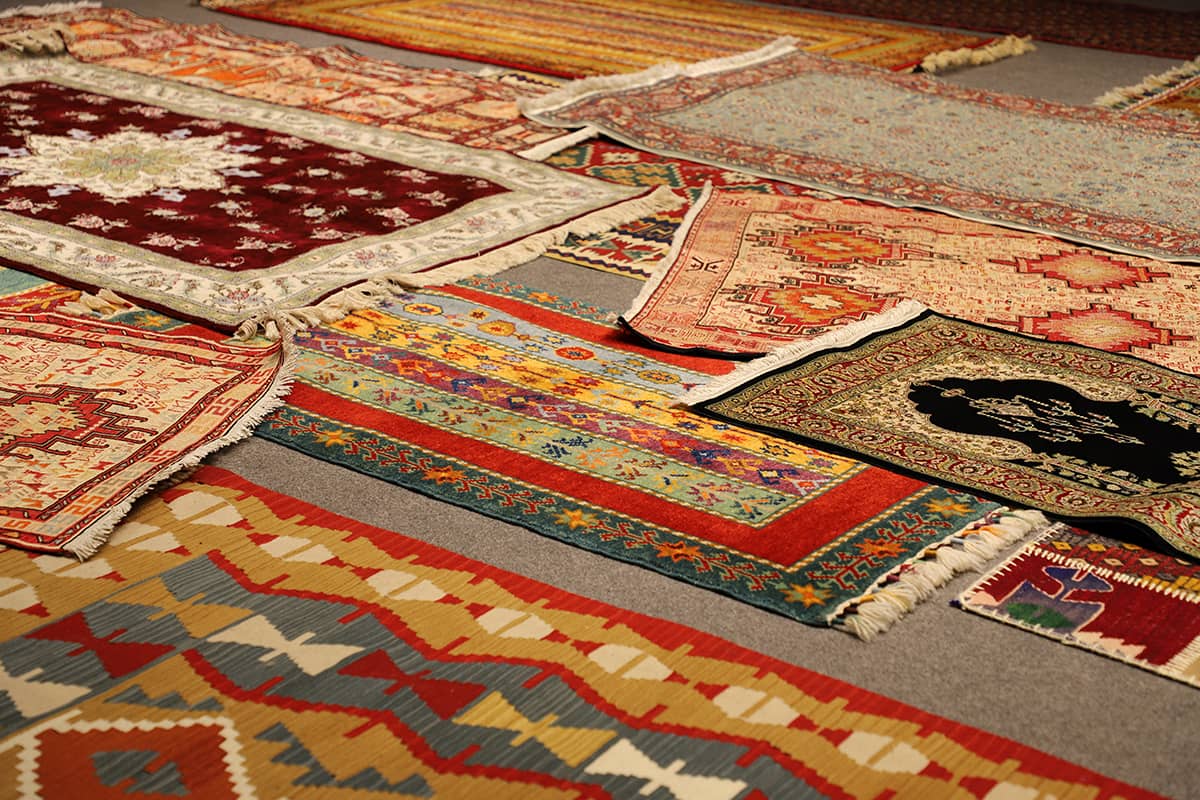 Kız Bergama, a type of carpet that tells a story of the Yağcıbedir tribe, is a famous example. The story is that of a young man from the Yağcıbedir tribe who fell in love with a young nomad woman. Her family, however, did not approve of their love, and this gave rise to a family feud. A family member from the girl’s side killed the young man, and in total despair and to overcome her sorrow, she started to weave... The pattern she copiously created is now a common type of Yağcıbedir carpet created in Bergama.

Bergama carpets have found a place in a wide range of interiors, spanning from 15th-century Transylvanian churches to the archives of collectors all around the world. Today, one can admire 15th-century examples of Bergama rugs exhibited in both Turkish and foreign museums, bearing witness to their significance in the history of art and culture.

Click here to learn more about weaving in Türkiye. 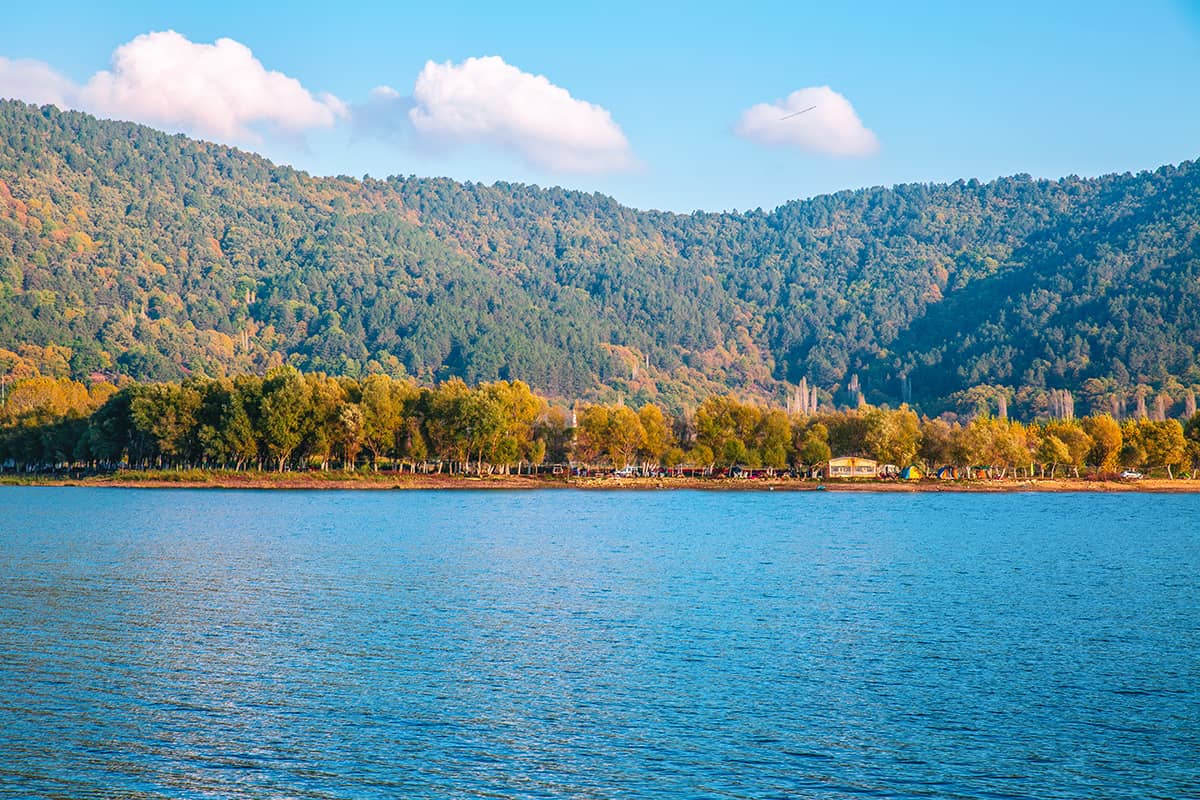 Ödemiş, a rural district in the province of İzmir that has been home to several civilizations like the Phrygians, Persians, Romans, Byzantines, and Ottomans, has developed a multicultural layout and retained its local character in the globalizing world. Local residents have introduced and produced numerous artistic products, ranging from woodwork to Ottoman miniatures, an exquisitely detailed style of miniature painting.

Here, we’ll be focusing on some of the most prominent handicrafts that have been practiced in Ödemiş and which are seen to have an important economic potential for the town’s local identity – namely, silk weaving, needle lace and canvas embroidery, and finally, felting.  Ödemiş, which includes the UNESCO-listed town of Birgi most certainly deserves your visit, and apart from its world-recognized handicrafts, its centuries-old woodlands dotted with old stone houses are guaranteed to charm you! 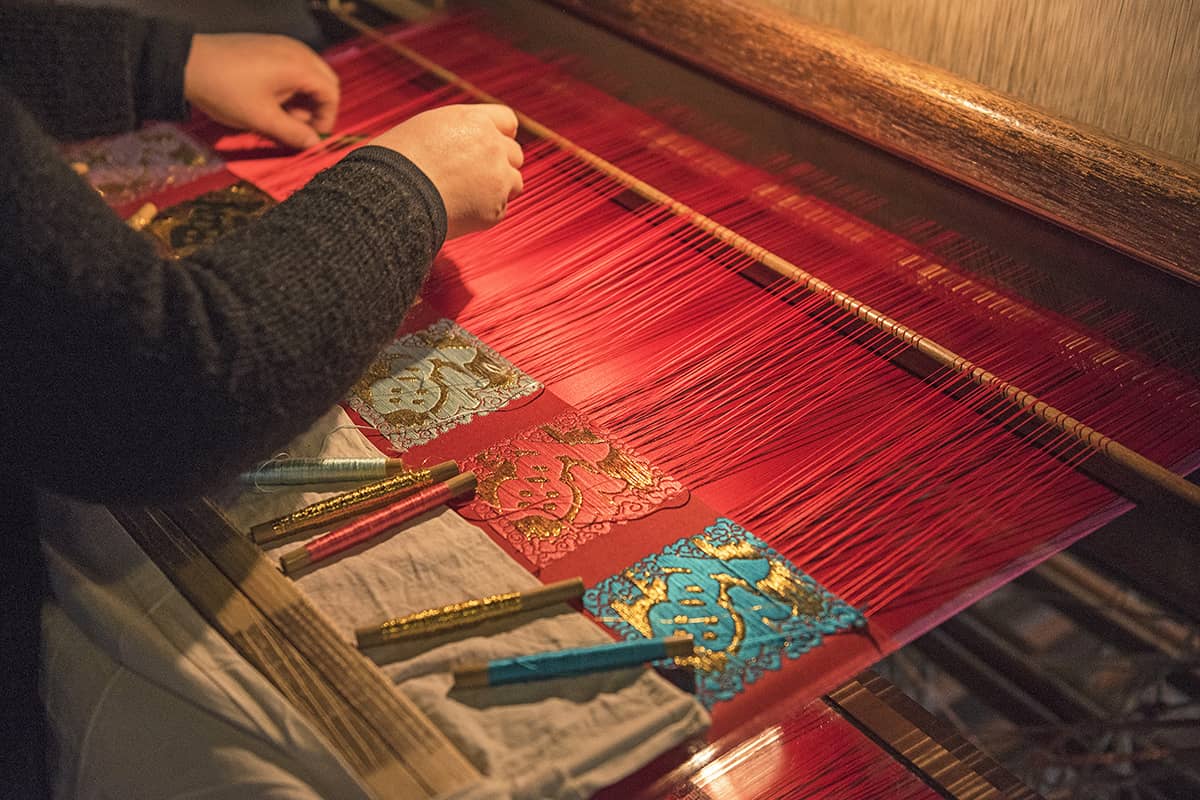 From time immemorial, silk has been a symbol of wealth and status for royal families and elites.

The village of Birgi in the district of Ödemiş is considered the heart of silk production and silk weaving in Türkiye. Its bürümcük fabric is especially famous and is believed to have been in production since the 15th century. In the 1940s, a total of 3,250 handlooms were being used in Birgi. Though production has been industrialized now to a large extent, the traditional styles and designs are still sustained. If you are visiting, don’t miss the chance to visit the Women’s Handicrafts Market which among others sells local silk products. 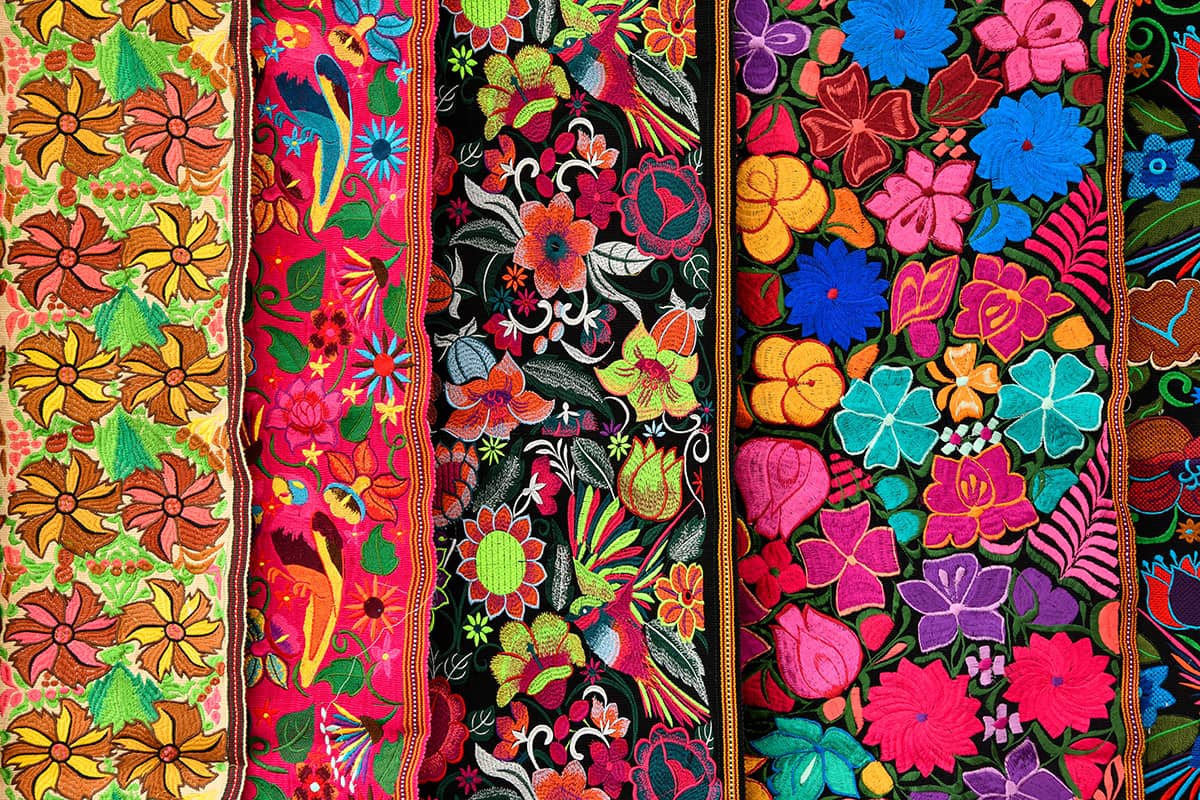 Oya, or embroidery, ornamented the cultural landscape of the late Ottoman times, decorating clothes, handkerchiefs, and even costumes of traditional dancers. This handiwork was largely produced using silk thread - nowadays nylon thread is used – and therefore it held a prominent place in Ödemiş, the very heart of silk production in Türkiye.

Canvas embroidery has survived the trends of a globalizing world thanks to the Turkish dowry tradition and is amongst the popular handicrafts of this region of Anatolia. Both oya and canvas embroidery make extensive use of floral and animal motifs in either two- or three-dimensional designs. 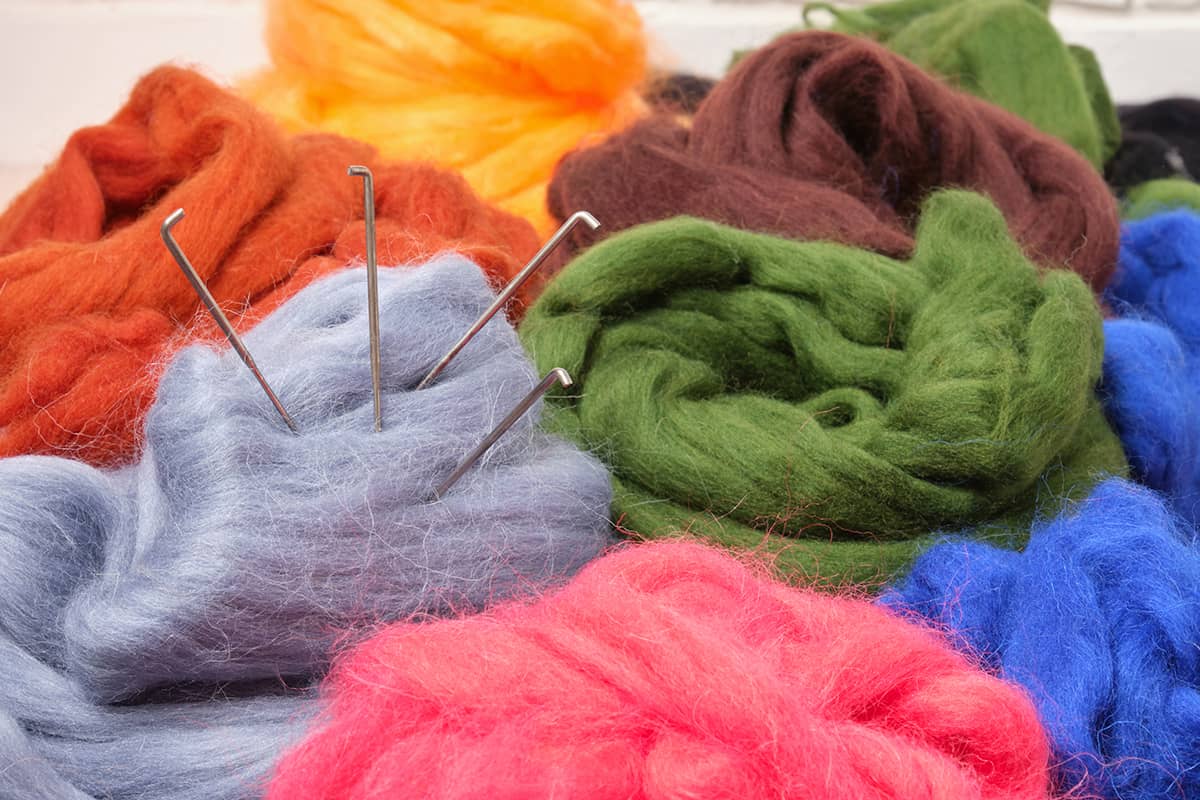 Known as “keçe” in Turkish, felting is an ancient craft that dates back to the Bronze Age. Felt is believed to be the world’s oldest textile, meaning it is older than both weaving and knitting, and is made by matting, condensing, and pressing wool.

The exact details of the emergence of felt in world history are unknown, but some legends claim that it was invented by accident when wool placed in people’s sandals mixed with sweat and was matted by walking. Funny as it sounds, felt has managed to survive to this day and is still commonly used as a fabric.

Though felting takes place all across the world, Ödemiş is especially famous for its felt products. Along the town’s classic TurkAegean streets, you’ll come across products such as bags, slippers, and even hats, made from this ancient natural fabric. 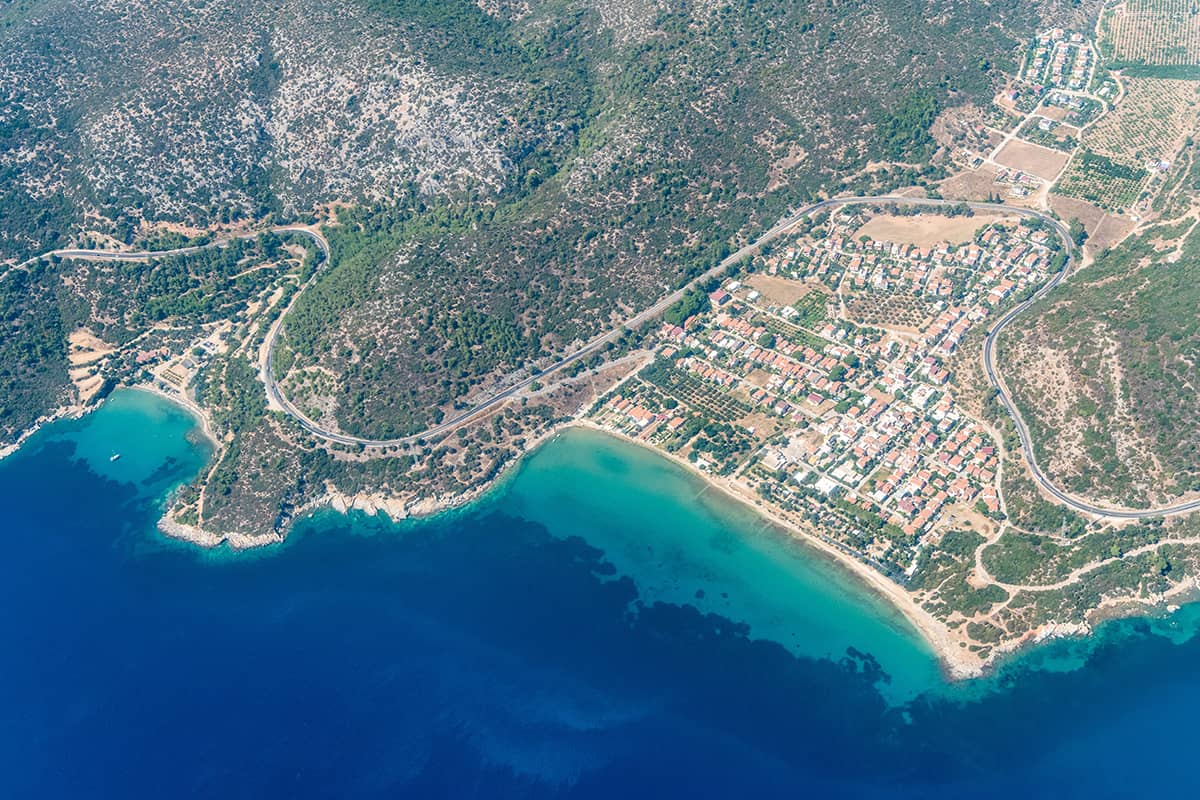 Menderes or, as it was once called, Cumaovası is one of the best TurkAegean district to experience arts and culture to the fullest. The district center is believed to have been first settled in the Byzantine period, but the ruins in the surrounding area date from even earlier periods. Similar to other districts we’ve covered so far, several ancestral handicraft traditions are preserved and sustained within the region’s borders. 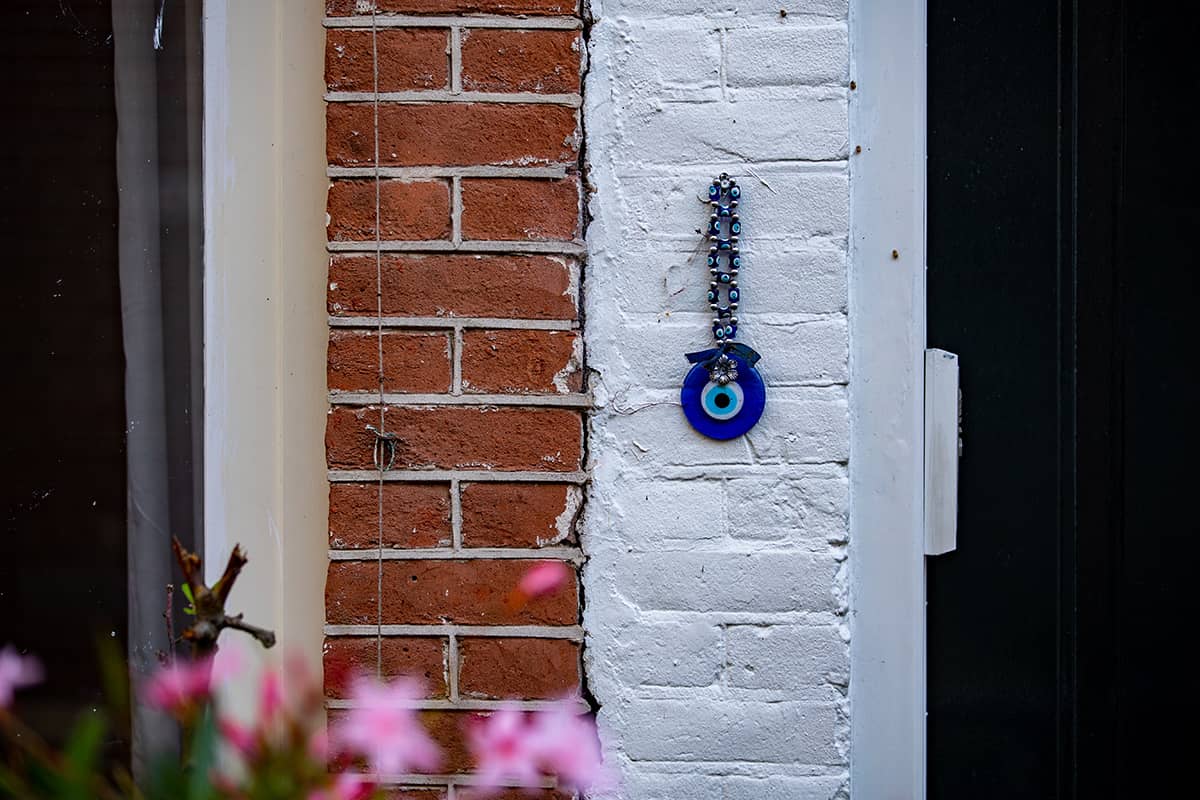 Perhaps one of the first things to come to mind when one thinks of the TurkAegean is the nazar boncuğu or evil eye – a blue glass bead sometimes shaped to resemble an eye hat is believed to ward off evil.

In the Menderes district of İzmir Province there is in fact a village called Boncukköy, literally the “village of beads.” The village is inhabited by Turkish ustas, that is to say masters of a certain craft, who specialize in making these evil-fighting talismans. 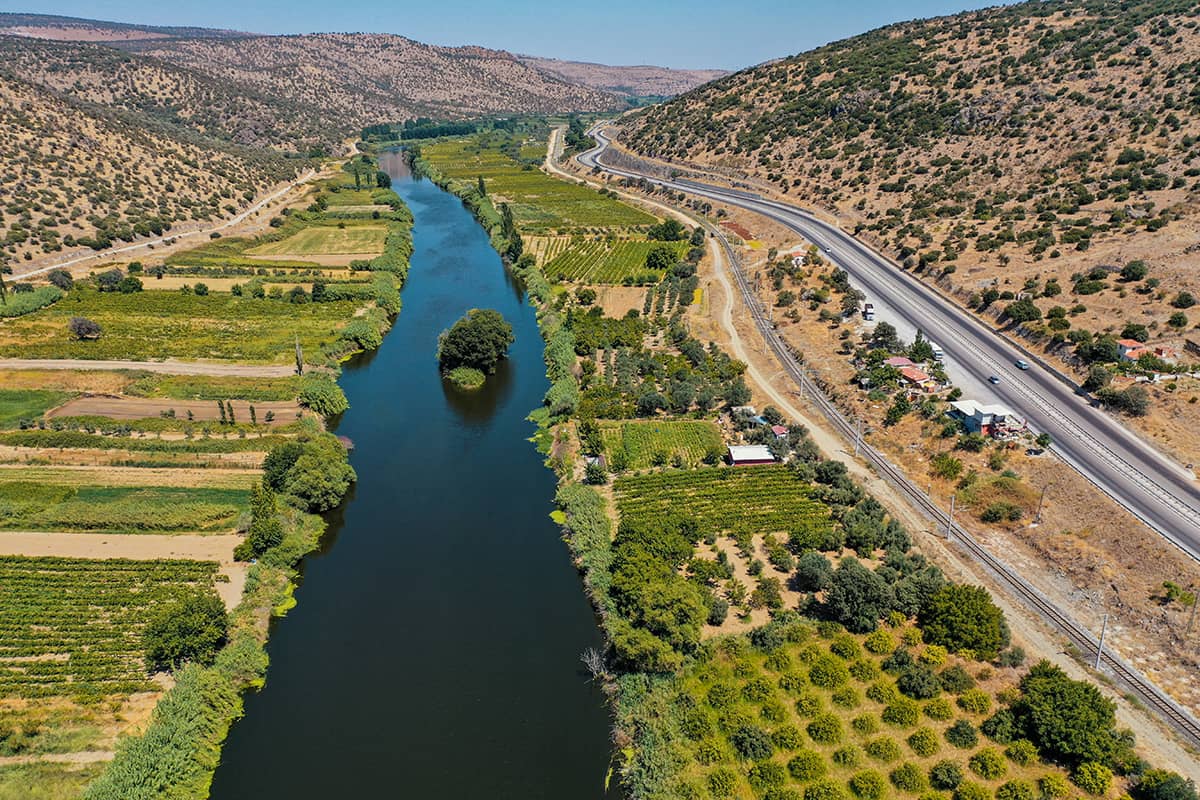 Menemen, a town in the province of İzmir, is famous primarily for its menemen dish, strawberries, pottery, and ceramic jugs. Green living and slow life are greatly respected and lovingly followed in Menemen, but here we will focus instead on its pottery tradition which is an essential part of local culture. 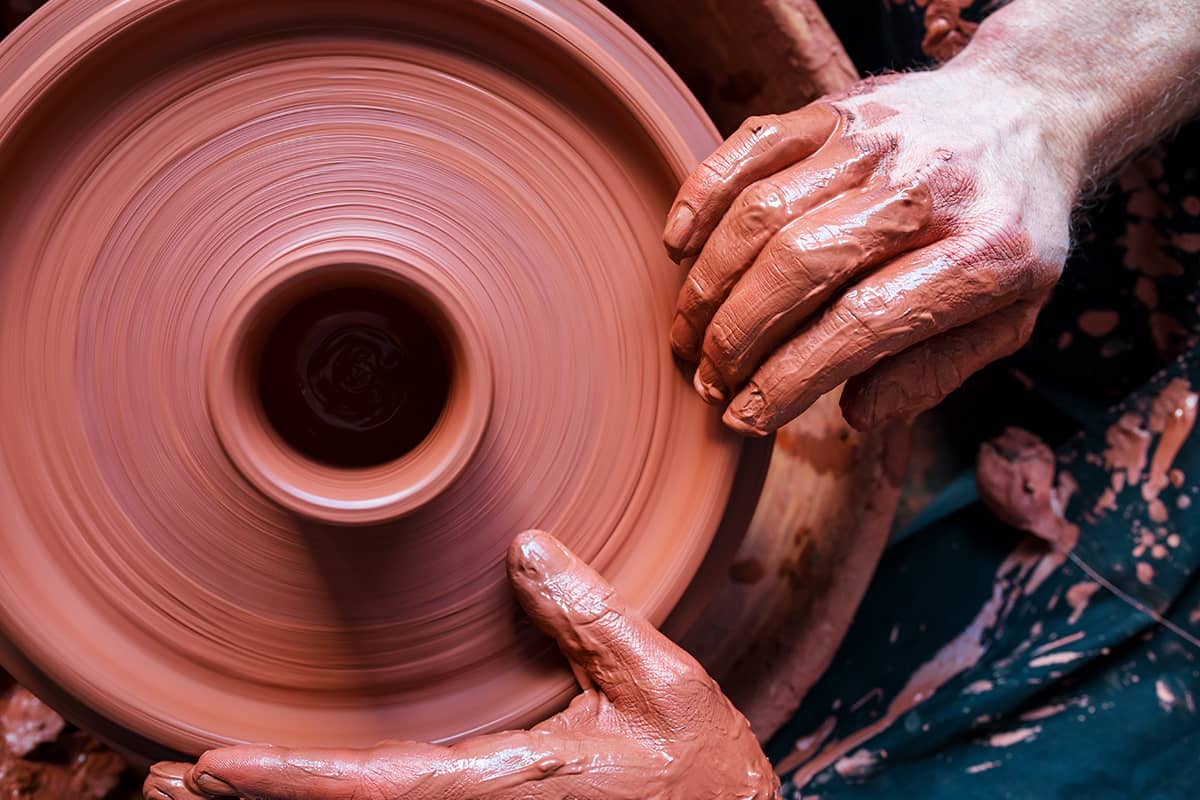 Pottery, or çanak çömlek as it’s called in Türkiye, has been practiced in İzmir’s Menemen district for centuries and has formed an indispensable source of income for locals. The Menemen Plain’s soil is suitable for pottery making, and has abundantly provided locals the raw material for pottery production.

Menemen testisi (Menemen urn) is now a popular souvenir from the area. Apart from Menemen urns çanak çömlek products vary in style, color, and purpose, and you’re certain to find one to fit your taste. 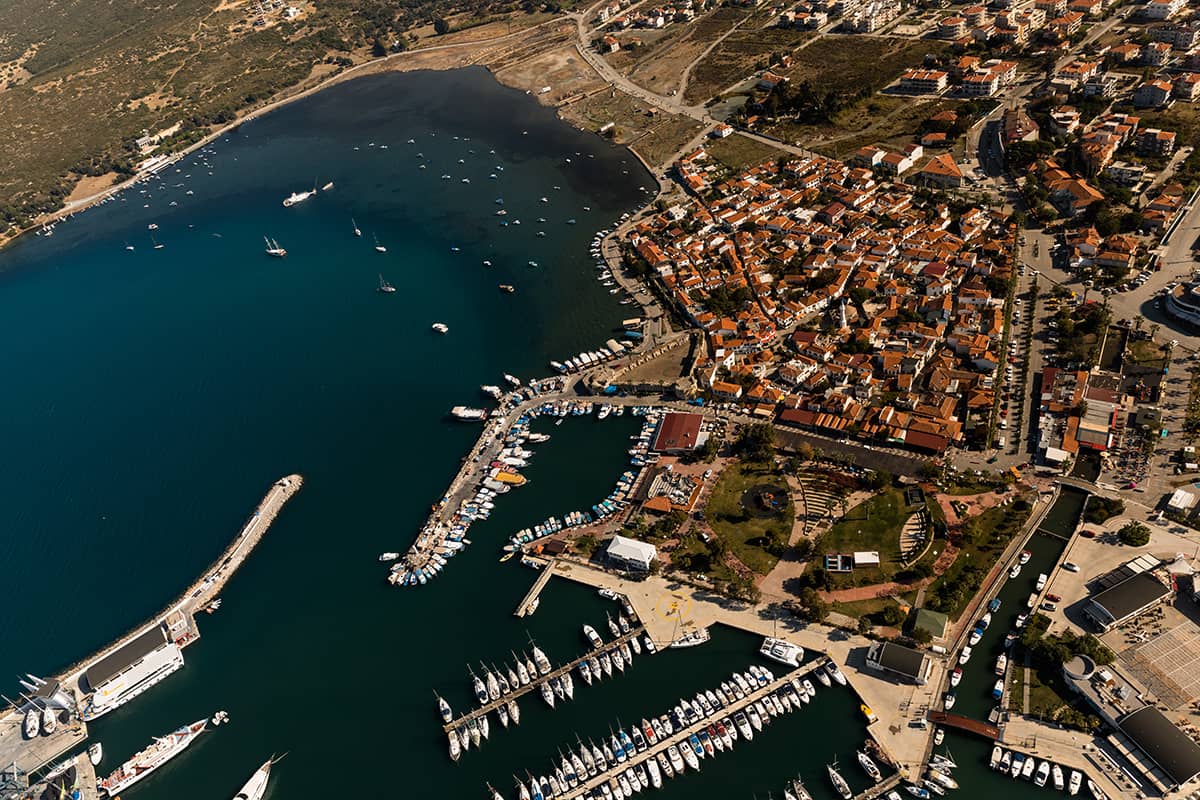 Seferihisar was the first Turkish town to be included in the Cittaslow network, a movement whose criteria include the “encouragement and preservation of artisan and traditional skills.” It comes as no surprise then that we can find some perfect examples of artisan craftsmanship and the slow food philosophy here! 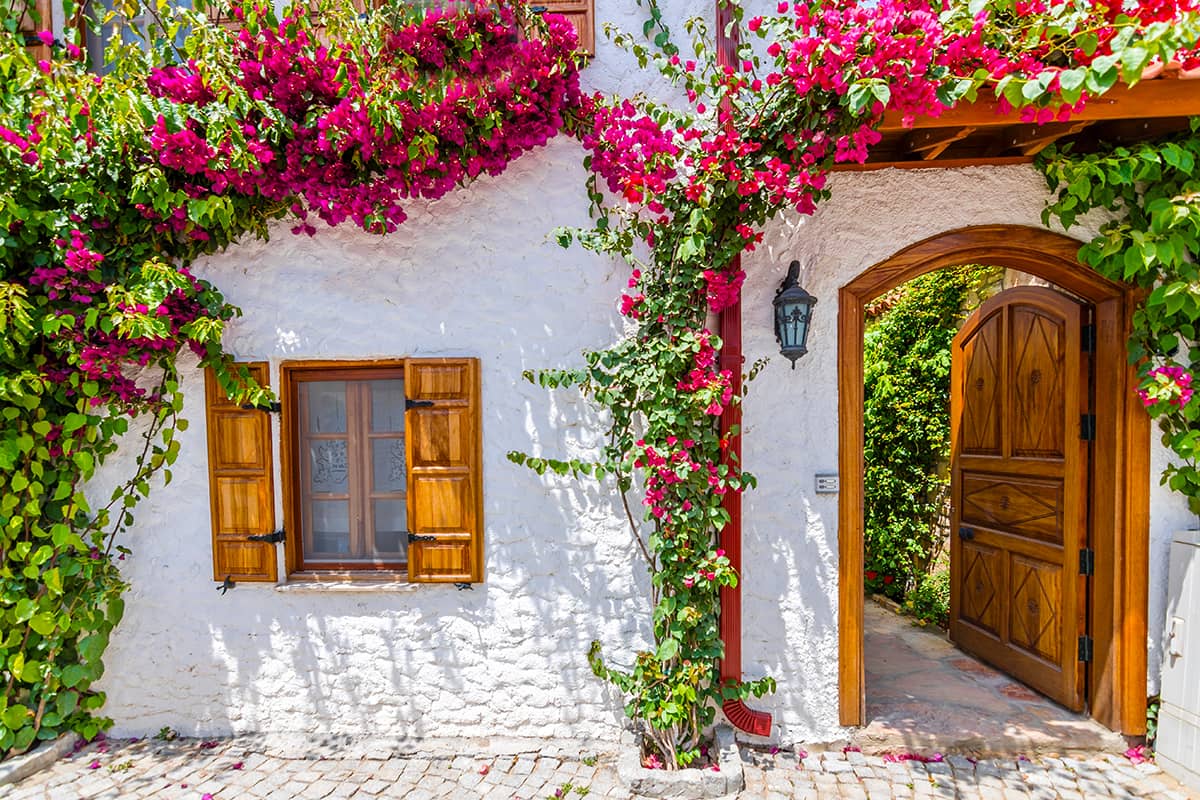 Seferihisar’s Sığacık Bazaar with stalls abundant in local organic products retains the slow food philosophy and takes important steps in preventing the disappearance of local food cultures and traditions. Here you can try local delicacies that perfectly reflect the food culture of Sığacık and the whole TurkAegean region. You’ll also find handmade jewelry and clothes that deserve your attention.

Arts and culture in Seferihisar 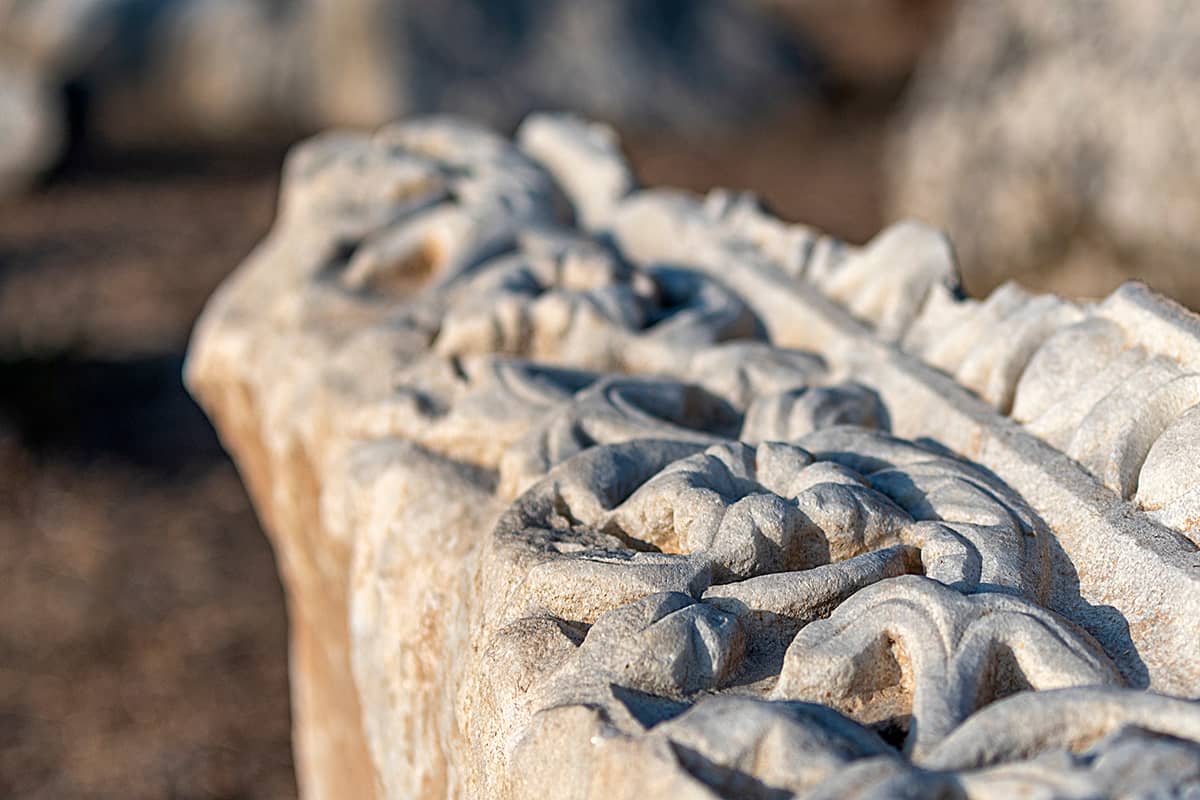 Seferihisar pays a lot of effort to encourage and preserve its traditional skills. This Cittaslow town hosts plenty of art camps, which are joined by hundreds of people eager to create art, including sculpture, painting, and ceramic products. Home to the ancient city of Teos, a former artistic center, Seferihisar offers a whole range of opportunities to satisfy the artist in you. 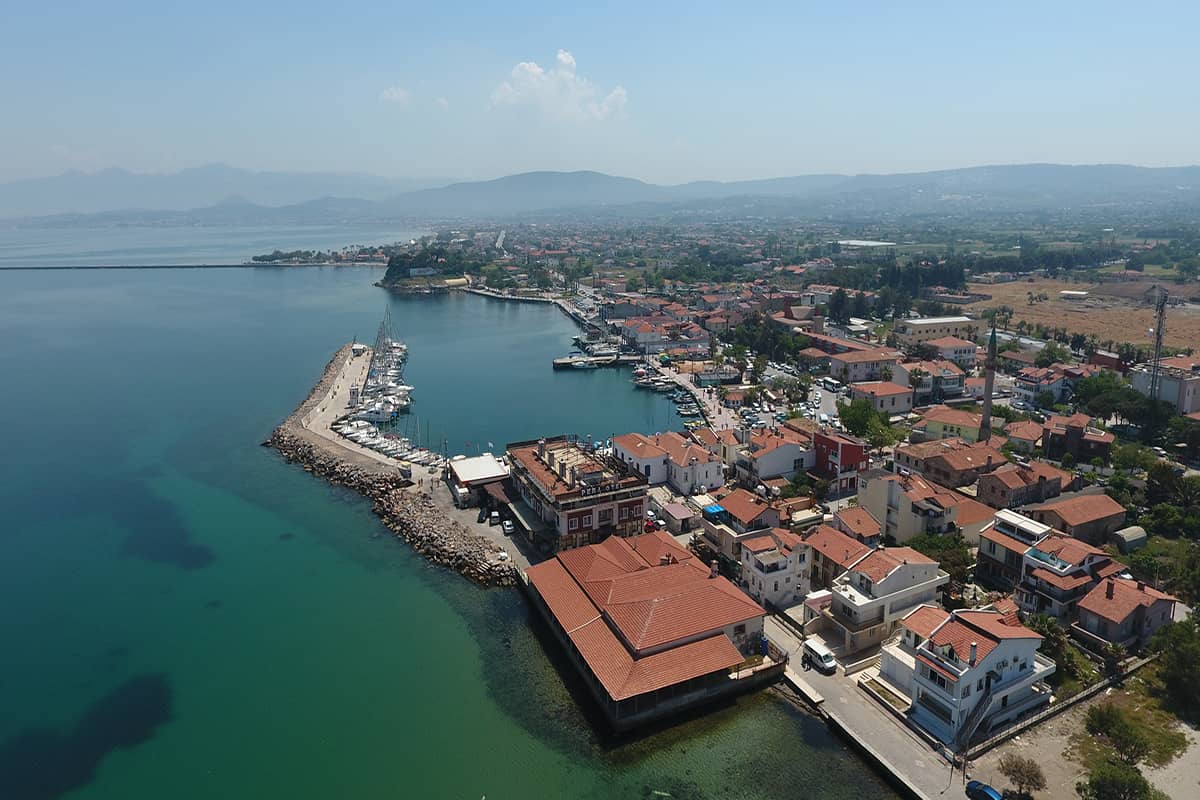 İzmir’s coastal town of Urla is widely celebrated for its attention to the slow food philosophy and its endeavors to preserve the place of artichokes in the TurkAegean food culture. Yet, there are many more aspects of the region that usually go unnoticed such as its production of high-quality pottery and the abundance of olive oil products. 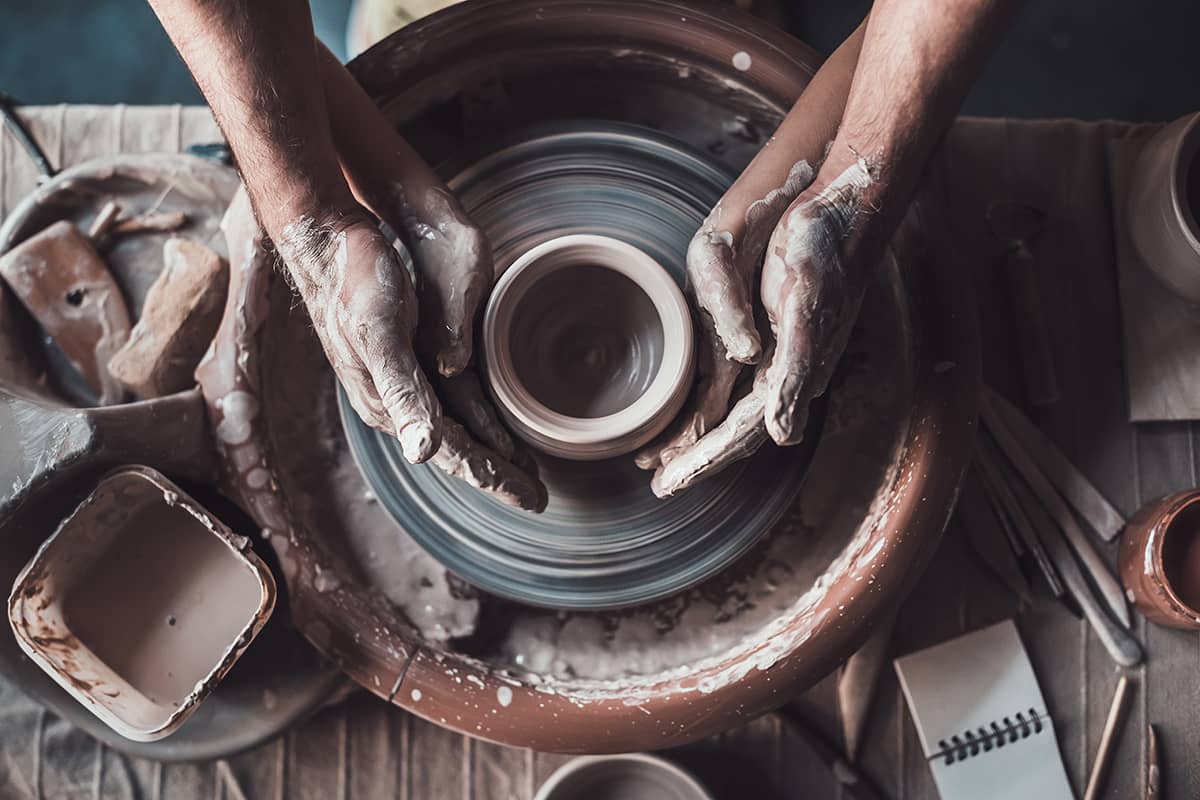 At the heart of İzmir Province, Urla is blessed by nature and famed for its culture Apart from its world-renowned cycling and vineyard routes, the town of Urla produces beautiful artisan pottery and hosts several workshops where you can try your hand at this ancient craft. 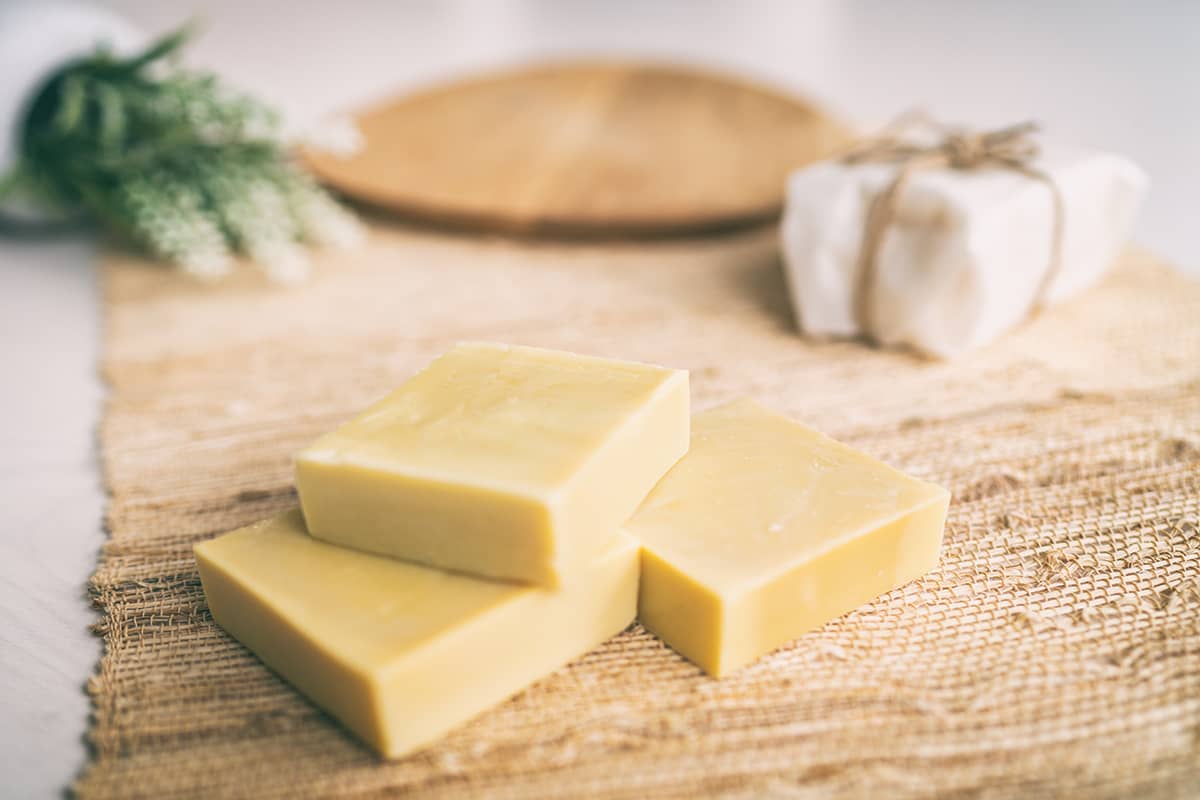 Urla strives for excellence in keeping the centuries-old tradition of olive production alive and strong. At the moment only the olive oil from Milas in Türkiye’s Muğla Province has earned a geographical indication from the EU, but it is without a doubt that several other regions deserve the same title and recognition.

Urla’s olive oil soaps are famous, and they’re the perfect souvenirs to bring back home! There are several shops and workshops in the region that you can visit to choose from their wide selection of local, natural products. 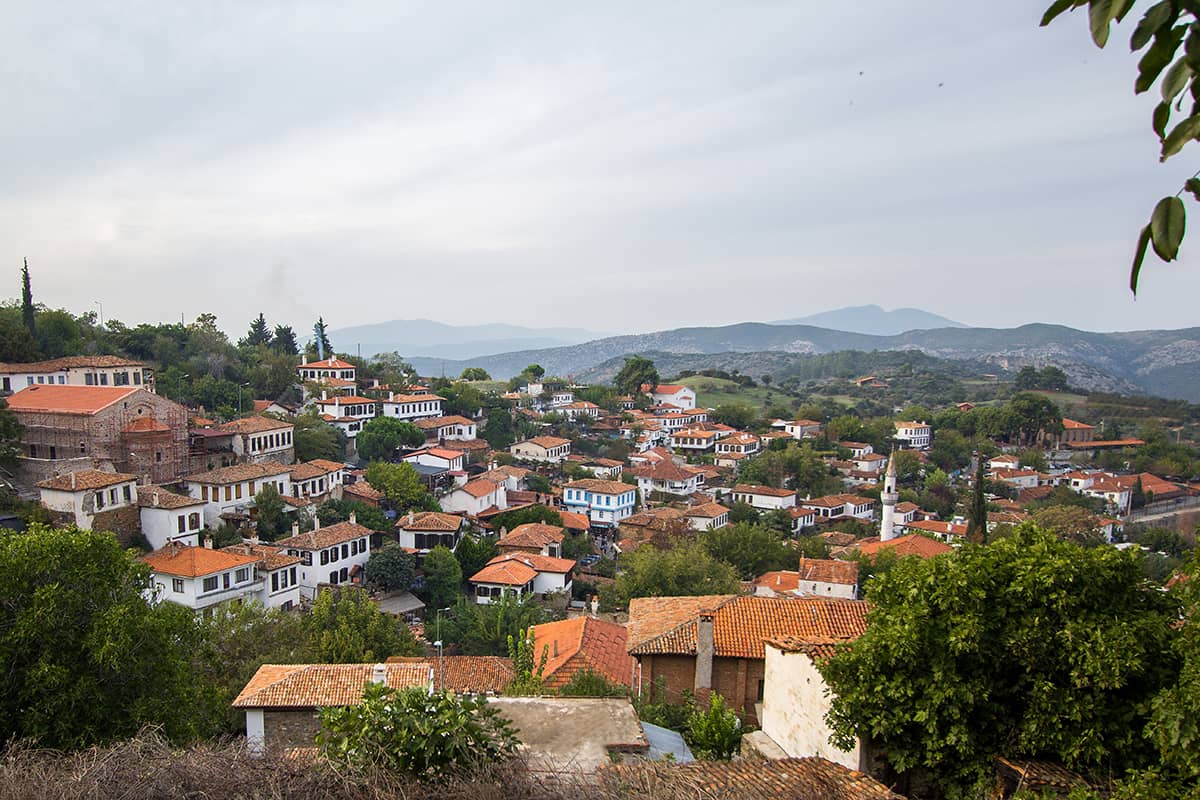 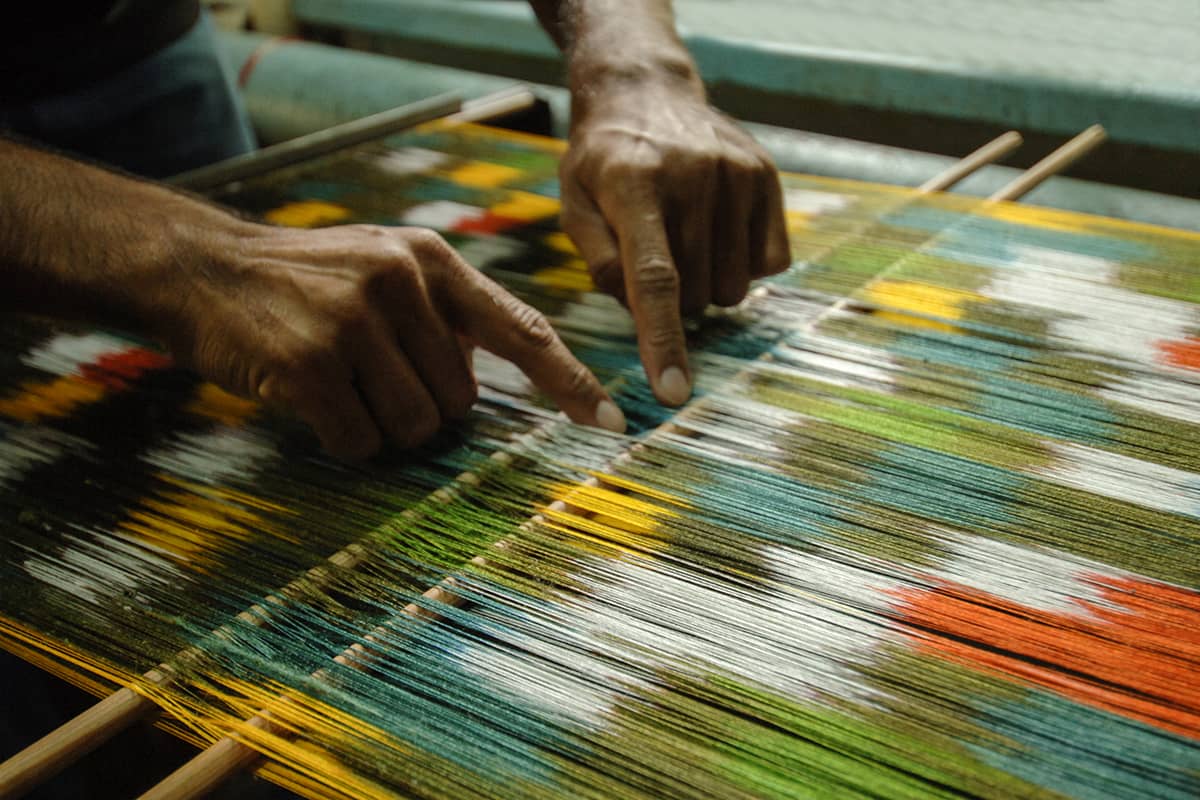 The town of Tire produces numerous wools, cotton and silk fabrics, and even has a weaving technique of its own known as beledi dokuması. In the past, fabrics woven using this technique found themselves a place in Ottoman and European palaces, and to this day, are widely preferred for their durability. 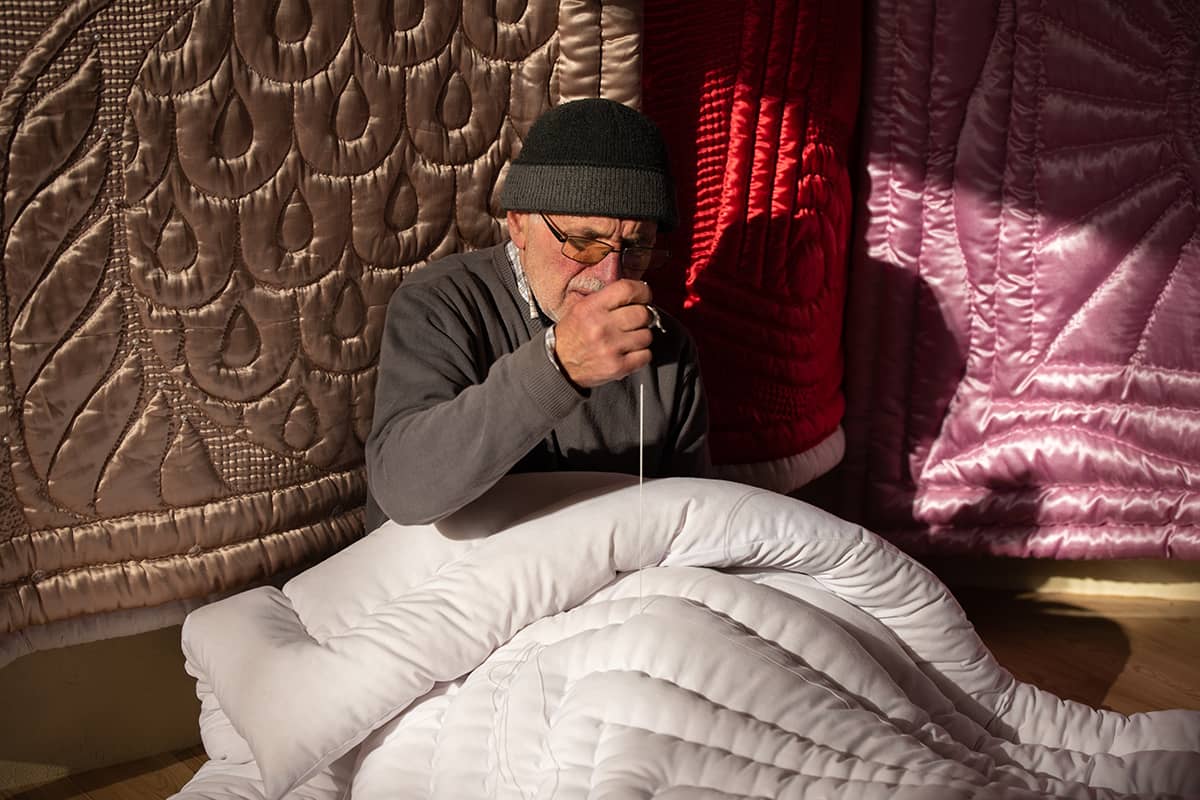 It’s an centuries-old tradition in the town of Tire to sleep under a satin quilt embroidered with traditional motifs. Here, you can come across Turkish ustas (masters) who still practice the art of quilting in their quaint, colorful shops.

Nalın is a local type of wooden shoe usually embroidered with silver thread. Ustas in Tire still produce these slippers, which have become an essential part of the Turkish dowry tradition. 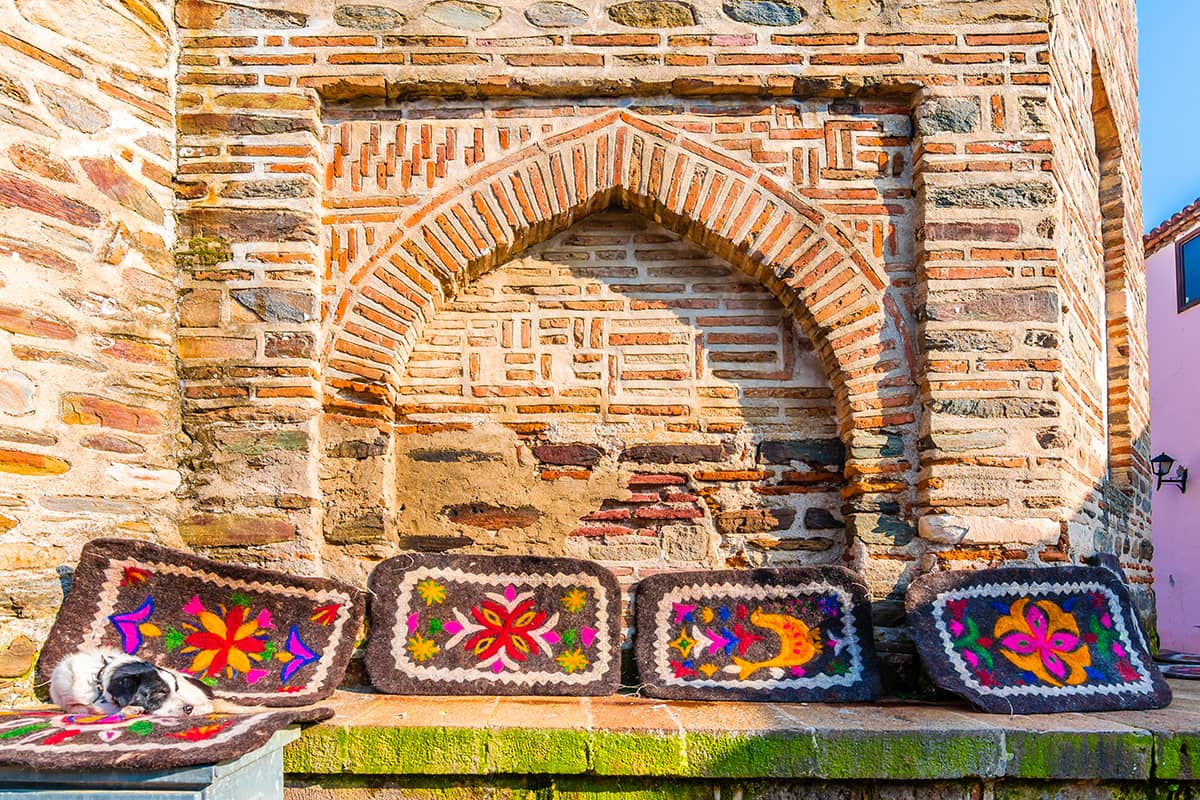 Like Ödemiş, Tire is known for its centuries-old tradition of felting. There’s a wide range of products that combine this traditional handicraft with modern designs – don’t forget to purchase some local felt products to bring back home!