Gastro Cities of the TurkAegean Coast

The TurkAegean coast is a place of pure beauty that is created entirely by the bounty of its natural landscape. A place of thriving orchards, olive groves and vineyards, where cities like İzmir and Bodrum enjoy a rich restaurant scene and every menu is inspired by the best regional ingredients. Whether luxury fine dining or a no-frills experience in a seaside village, the TurkAegean has it all. 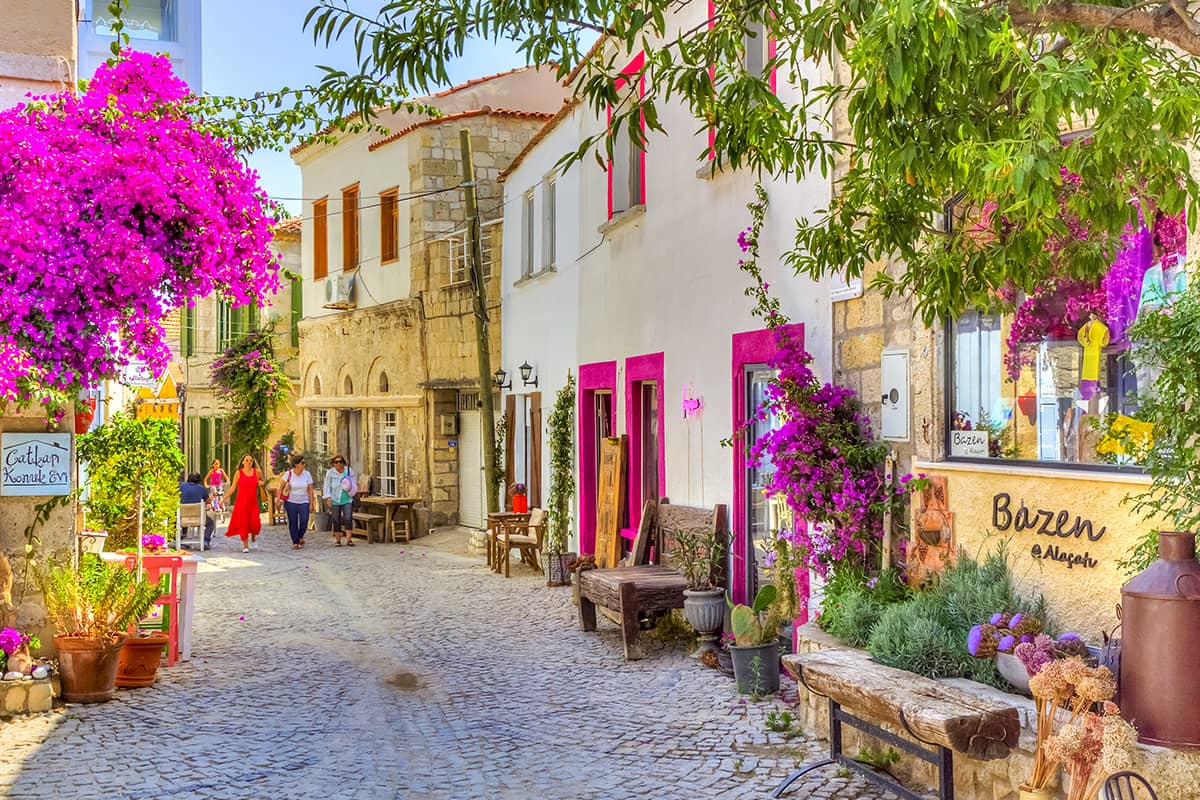 İzmir and Bodrum are the ultimate representatives of the Aegean lifestyle in Türkiye. A confluence of land and sea where some of the best ingredients are grown and sourced locally by passionate producers inspiring the menus of acclaimed chefs. Where endemic grape varieties are being resurrected, winning international awards and where the freshest of the daily catch is served right by the sea from where it came from. These are two regions of olive groves and orchards, luxury hotels hidden in the natural landscape and summer homes in the shade of bougainvillea bushes. Far more than a place of beautiful beaches and hidden bays, the two main cities of the TurkAegean are both local and international, ancient and contemporary, traditional and youthfully experimental. 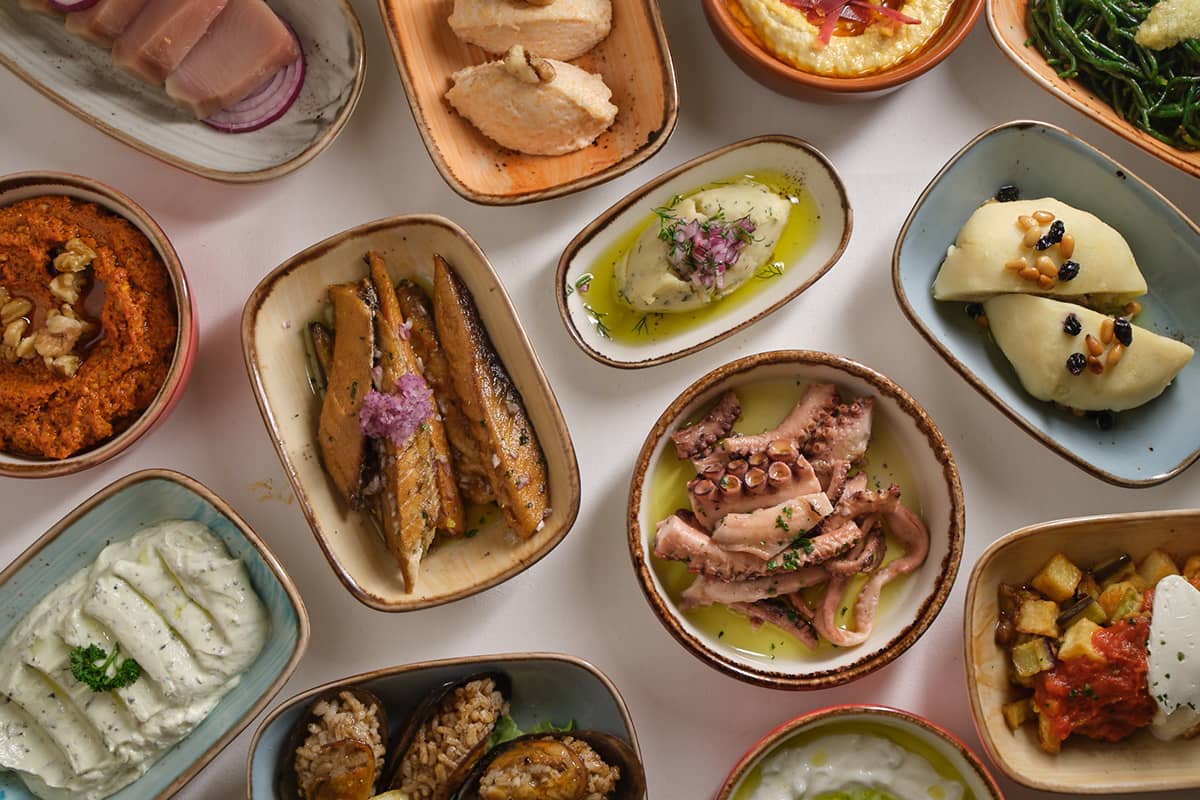 The city of İzmir is famous for its fish restaurants that look out over the sea and serve grilled fish and an endless array of meze dishes to its discerning guests. Türkiye’s third-largest city sparkles not only with the azure grace of the Aegean but also with its seafront Kordon (promenade) which is lively no matter what time of day. Lively just like its historic Kemeraltı Market dating back to the 17th century with its colourful stalls selling everything from fresh produce to pickled vegetables, and homemade bread. The province of İzmir stretches along the TurkAegean coast with districts such as Çeşme and Urla acting as gastronomic magnets that entice visitors to venture outside the city and explore the landscape. Among the colourful cobblestone streets of Alaçatı, one of Çeşme’s most popular towns, cafes inside the old stone houses serve traditional Turkish breakfasts laden with regional delicacies from fresh herbs and olives to cheeses and spreads. It’s no secret that the gastronomic excellence in the İzmir province is derived from the fruitfulness of its lands, where everything grows in abundance, strengthened by the sun and the sea. Since 2010, Alaçatı hosts the Ot Festivali (Alaçatı Herb Festival) annually, where the diverse world of edible Aegean plants is celebrated with vendors selling more than 45 varieties as well as traditional herb dishes. 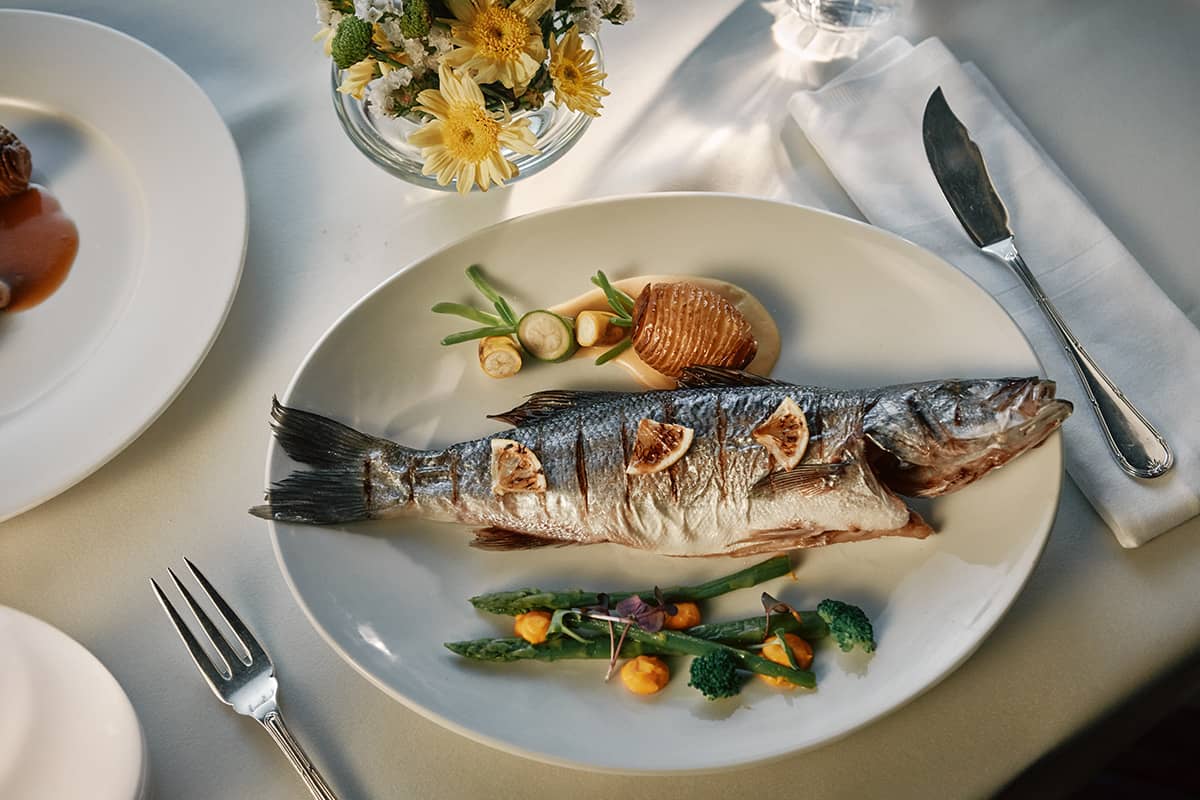 In a province famous for the Temple of Dionysus in Teos, the historic marble site dedicated to the god of wine, it comes as no surprise that its district of Urla has become a centre of Turkish viticulture.young winemakers are producing ward-winning wines, actively resurrecting endemic varieties and bringing back a tradition that goes back thousands of years. It is here that the local Bornova Misketi and Urla Karası came back to life, besides other prime Anatolian grape varieties like Öküzgözü, Boğazkere and Kalecik Karası, all of which are poured into wine glasses at fine dining restaurants both in Türkiye and abroad. A specially marked route connecting all these vineyards was also established, allowing visitors to indulge in wine tasting tours on foot or a bike. Every year in August, the Urla Grape Harvest Festival invites visitors to the Malgaca Bazaar to meet with winemakers and their precious harvest with live music in tow. Urla Enginar Festivali (Urla Artichoke Festival) celebrates the district’s other famous harvest, the native sakız artichoke and all its dedicated producers. 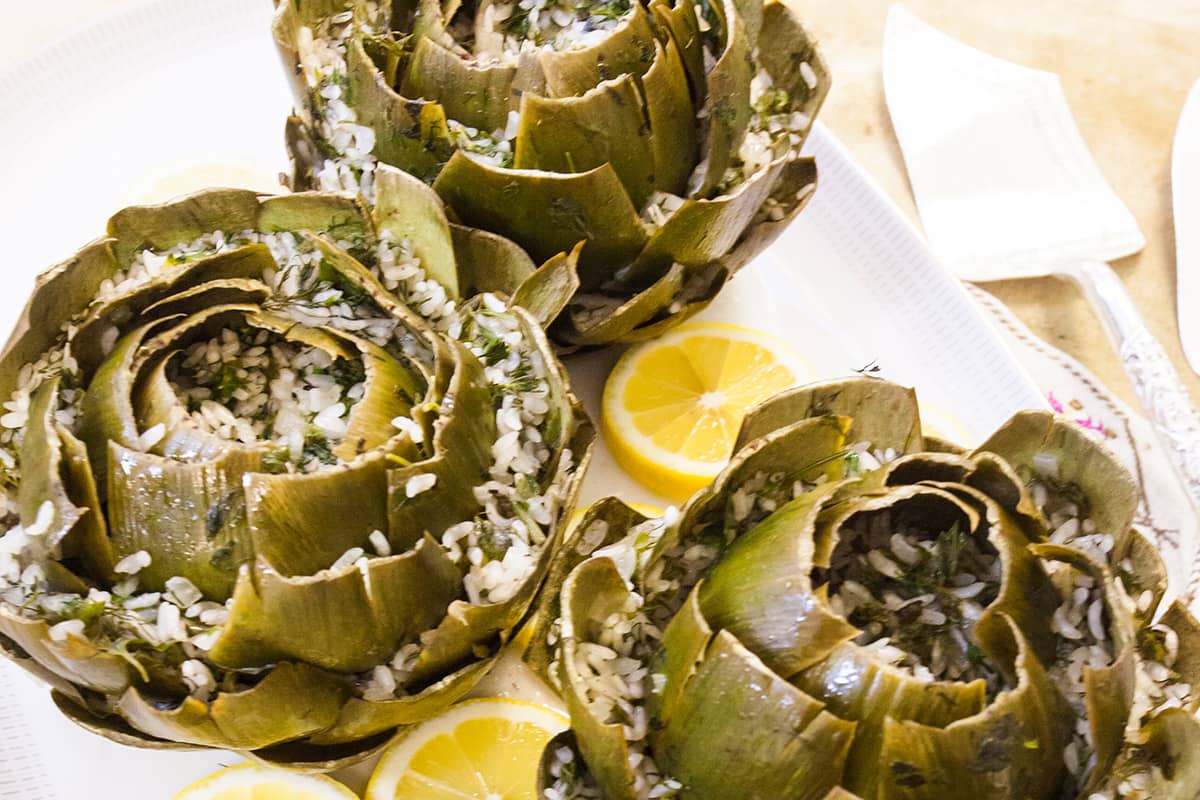 It is also in Urla that young chefs, who received training at world-renowned restaurants and decided to leave the high energy of city life, settled down and opened their own restaurants. Right in the countryside, in the heart of where their ingredients come from, their minimalist dining rooms serve the best of what İzmir has to offer with an experimental touch, defining the TurkAegean cuisine, a culture all its own. 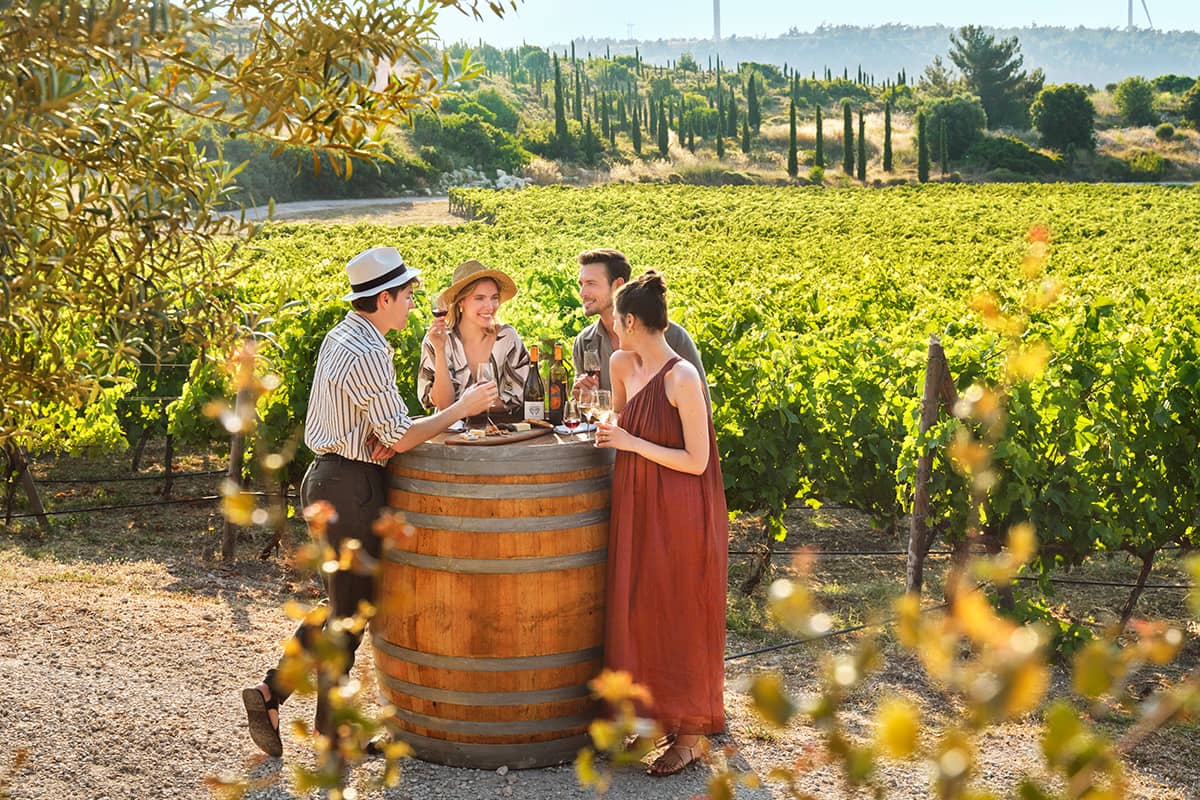 Down the coast, the province of Muğla emerges with the city of Bodrum as one of its main points of interest. The city of touristic vigour, Bodrum stands strong with its many restaurants and bars that line the waterfront with the historic Bodrum Castle in the distance casting its bold presence. The summer province, where the hills are dotted with the iconic white vacation houses bedecked in bougainvillea bushes, Bodrum is also a centre of luxury where many international hotels offer fine dining that’s heightened by the richness of regional ingredients such as seafood, produce, olives and olive oil. Within these luxury hotels, some of the most well-known restaurants and bars of the world’s gastro capitals, including İstanbul, also open their summer branches, bringing the taste of the city to the seaside. 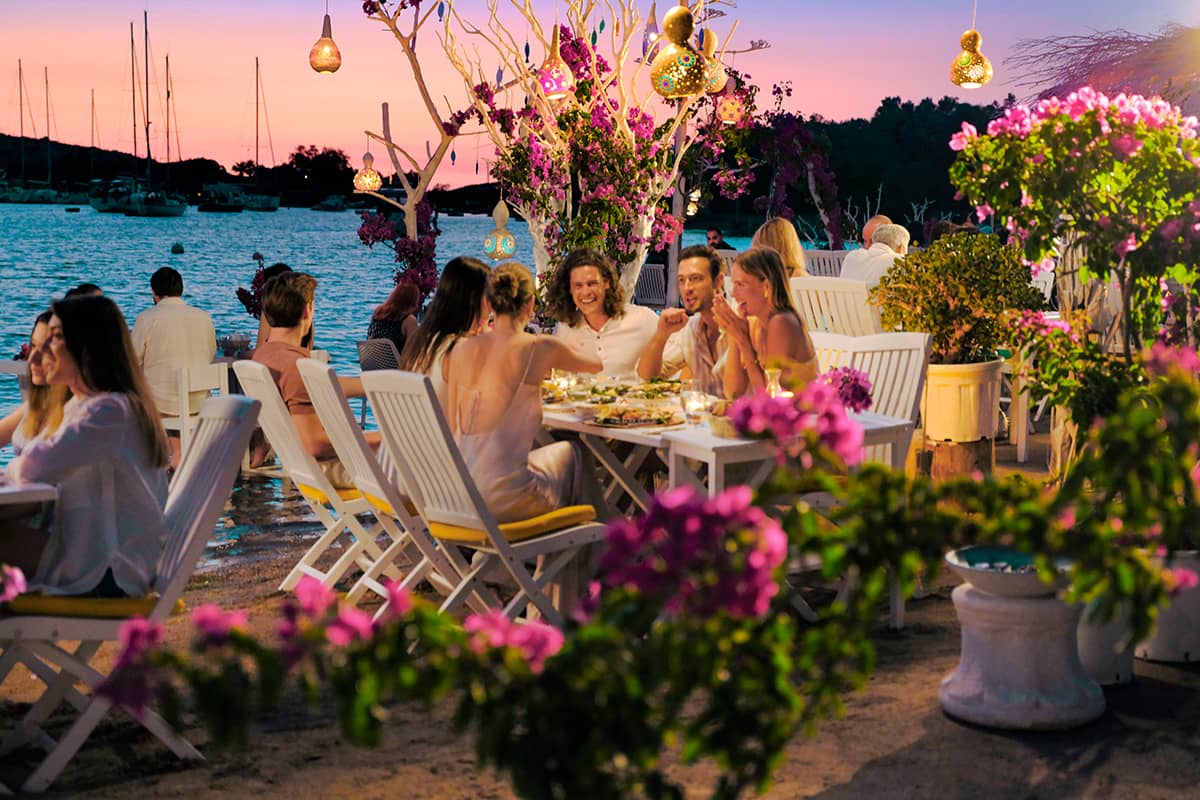 Grand marinas, such as the one in the bay of Yalıkavak, are the perfect stopovers for luxury yachts that are indulging in a blue voyage along the Turkish Riviera, with restaurants that soak up the beauty of Bodrum at night with the moon reflected in the calm surface of the sea. And in small seaside villages such as Gümüşlük, charming seafood restaurants also benefit from their proximity to the sea, sometimes even placing their tables and chairs right by the water. So close that one might just take off their sandals and dip their feet in the cool water whilst eating their fresh grilled fish and traditional meze, Turkish cold and hot appetizers served on small plates. This is one of those classic experiences that make the TurkAegean so special, a place where nature paves the way for sophisticated tastes enjoyed with a view of the olive groves, the vineyards, the hidden bays and the endless expanse of the blue sea.