Çanakkale's Museum of Troy: What to Expect

With a rich historical and cultural heritage of over 5.000 years, Çanakkale is the land where history and legends merge, and myths come alive. Located on the Dardanelles linking the Aegean with the Marmara Sea, this lively and windy province is famous for its Kilitbahir Fortress, Çanakkale Martyrs' Memorial, WW1 battlefield sites, iconic clock tower, lush nature, tranquil islands Bozcaada and Gökçeada, and the ancient city of Assos with its turquoise waters. 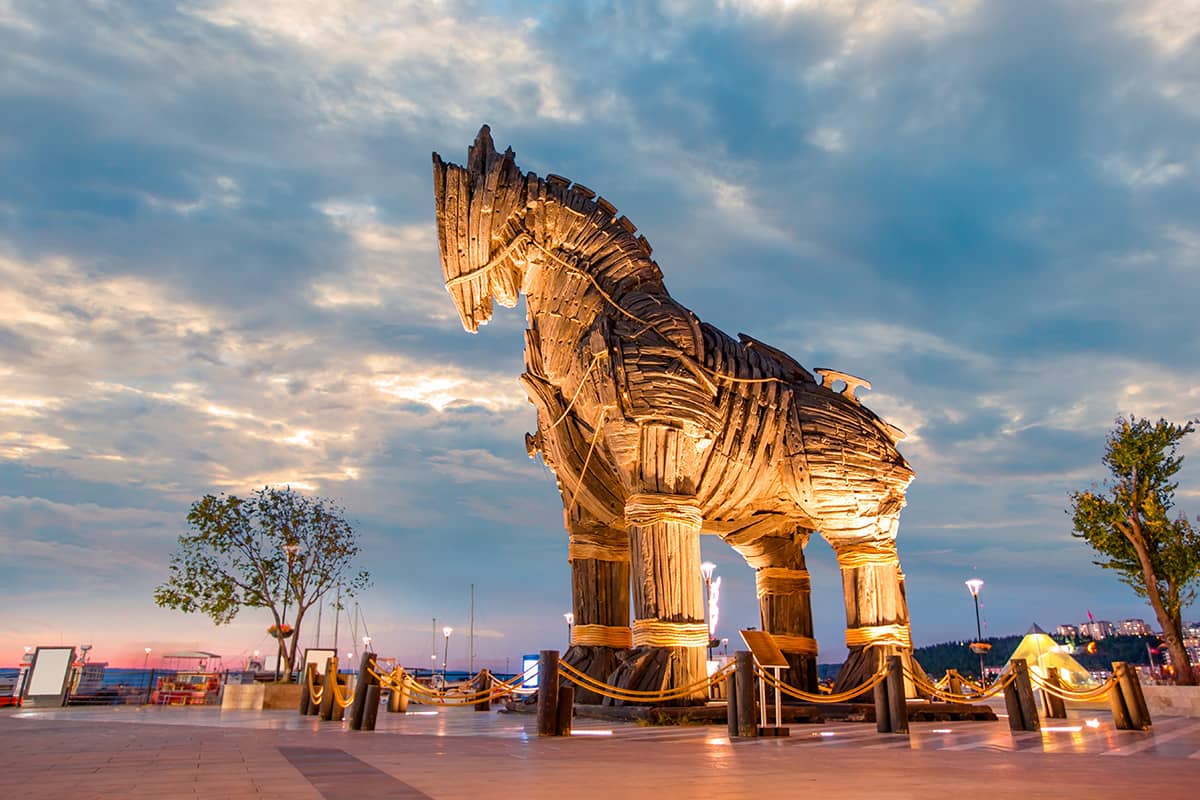 The Story of the Trojan Horse

Today, the Trojan horse from the globally successful 2004 film Troy can be seen on display on the seaside promenade of Çanakkale's city centre. But if you're really interested in the history of Trojans from around 3000 B.C, what you're looking for is only 30 kilometres (about 19 miles) away: the Museum of Troy.

Located just 750 meters from the ancient city of Troy (which was added to the UNESCO World Heritage list in 1998) in Tevfikiye village, the Museum of Troy opened its doors in 2018. With a contemporary, industrial design, this impressive cube-shaped building suddenly takes your breath away in the barren landscape of the Trojan plain.

The museum has a 3.000 m2 exhibition hall and an 11.200 m2 covered area. It hosts over 40,000 portable artefacts gathered from the excavation site as well as various other museums, and 2000 of these are on display. The entrance consists of a wide ramp leading to an underground gate, which in turn leads to the exhibition spaces, a cafe, a restaurant, and a museum shop.

History of Troy in 4 Levels

The exhibition is divided into four levels from the bottom to the top: Cities of Troad, Layers of Troy, Ancient World, and Troy Excavation History. There are seven sections offering a historical overview of Troy and the Troad (today's Biga Peninsula): Troad Region Archaeology, Bronze Age of Troy, Illiad and the Trojan War, Troad and Ilion in Ancient History, Eastern Rome and Ottoman Period, History of Archaeology, and Traces of Troy. All historical artefacts in the museum are supported with written and visual panels and presented with dioramas and animations.

Here, visitors can observe some of the most notable artefacts, such as a collection of amphorae, column capitals, and tombstones. Terracotta figurines, pots, tear bottles, tools made of stone and bones, masks, and puppets might pique your interest. Trojan Treasure is definitely worth seeing. This level also includes a scape for temporary exhibitions, and fun "discovery boxes" for children are available.

The ramp takes visitors to the next level, Level 1, and the museum continues to mesmerize, shedding light on the Bronze Age of Troy with a multimedia representation of six layers of the ancient city (Troy I, II, III, IV-V, VI, and VII). This presentation is designed to show the changes of Troy over the millennia. Daily life in Troy is also explored with details from masonry, weaving, pottery-making, and cooking methods. 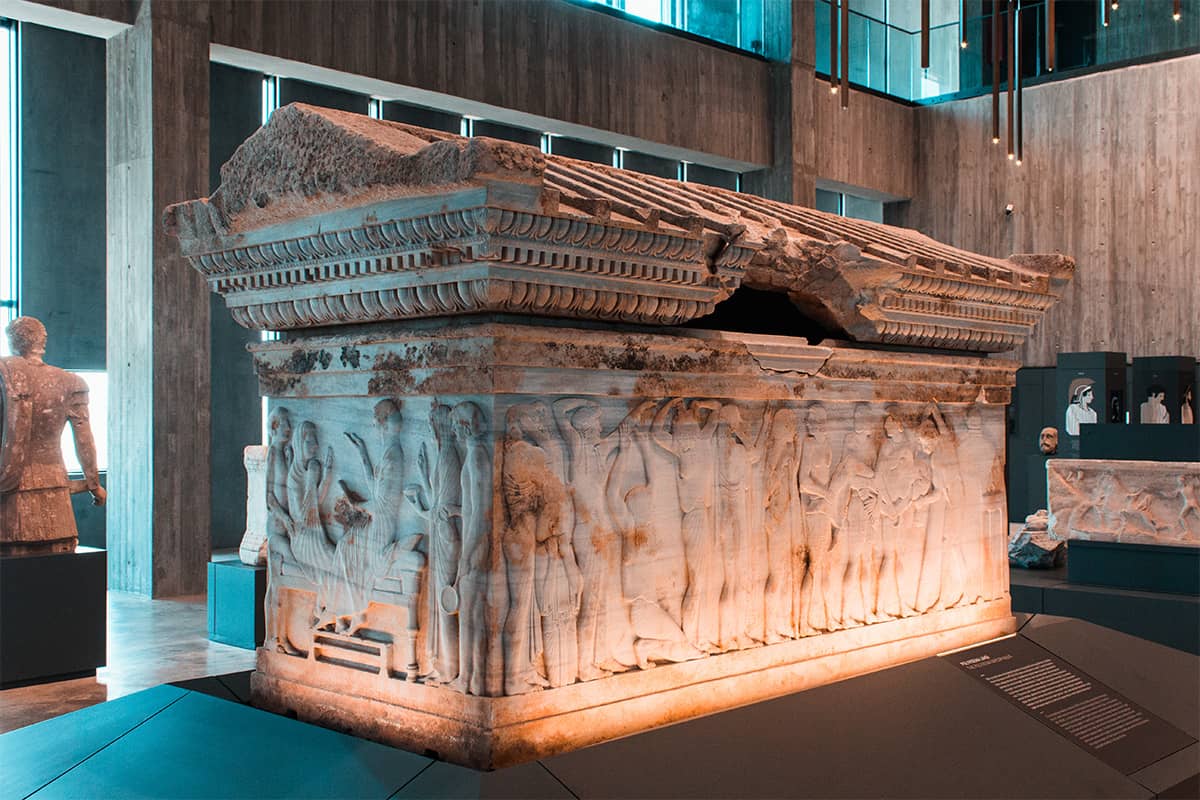 As you climb up to Level 2, a history of the transitional period between the Bronze Age and the Iron Age will accompany you. You will also find clues from the Roman-period Ilium (Troy). The most prominent artefacts are a statue of Emperor Hadrian, Polyxena Sarcophagus, and the statue of Triton.

Dating back to the 6th century B.C., this sarcophagus is the earliest stone sarcophagus with figural reliefs ever found in Asia Minor. It was discovered in Kızöldün Tumulus in 1994. On three of its sides, a depiction of a funeral celebration can be found, and on the back, the sacrifice of Polyxena, daughter of the king of Troy, is represented. The statue of Triton (Kentauros), which was found in Parion (Kemer) in 2012, is also on display on this floor. Finally, this floor boasts a massive model of the Trojan War, with a multimedia presentation with interesting details from the Iliad.

Level 3 is mainly centred around the history of Troy excavations. The exhibitions on the highest level of the museum are divided into several categories: Troy in the Gallipoli battles, Troy in popular culture and art, Ottoman Çanakkale, and the Lost Heritage. This level is an excellent source of fun facts about the Trojans. For example, the mysterious question about the true descendant of Trojans... 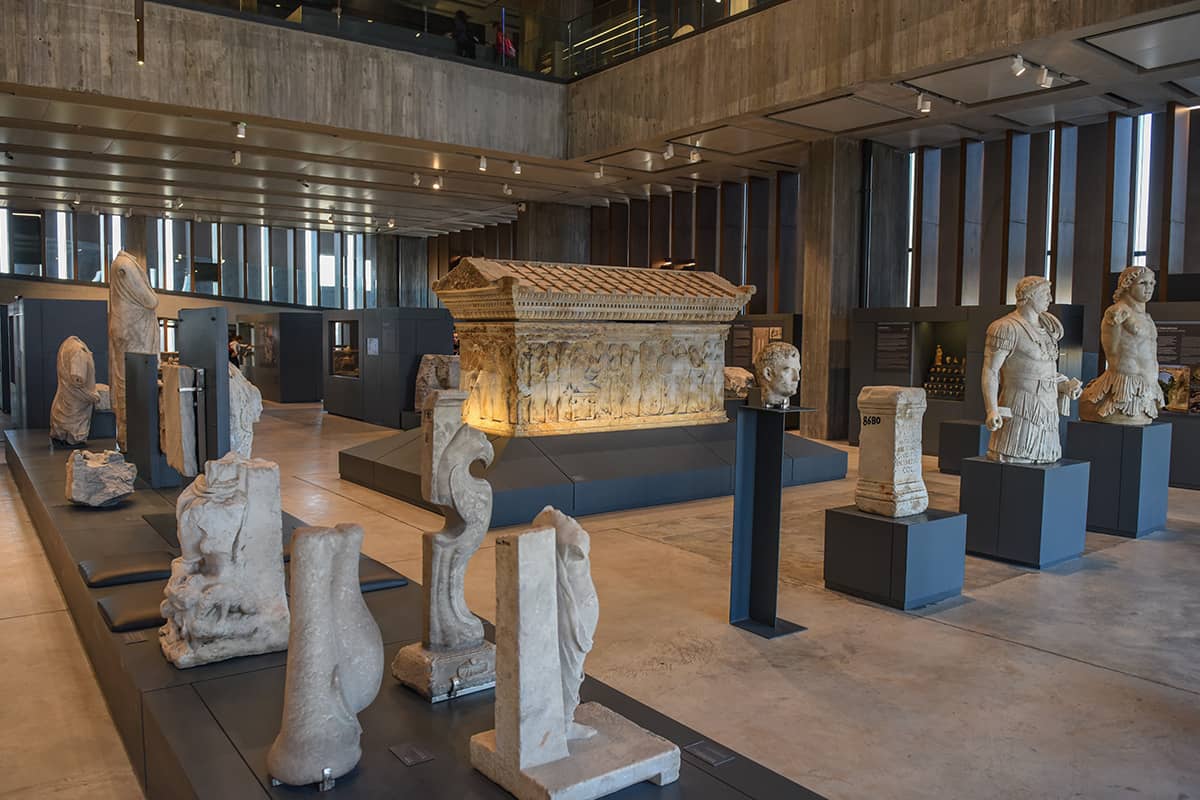 Offering unique pieces from the area's history spanning 5,000 years, this extraordinary museum has won two awards in 2021: 2020/2021 European Museum Academy (EMA) and European Museum of the Year Awards (EMYA). The Museum of Troy is the first Turkish museum to receive both awards.

One more thing before you leave! Make sure to stop by the museum shop. You will find a selection of original and high-quality souvenirs and books for your loved ones. And if you can't get enough of this lovely museum, just remember this: There are many more stone artefacts, columns, steles, and column capitals waiting for you in the museum yard!